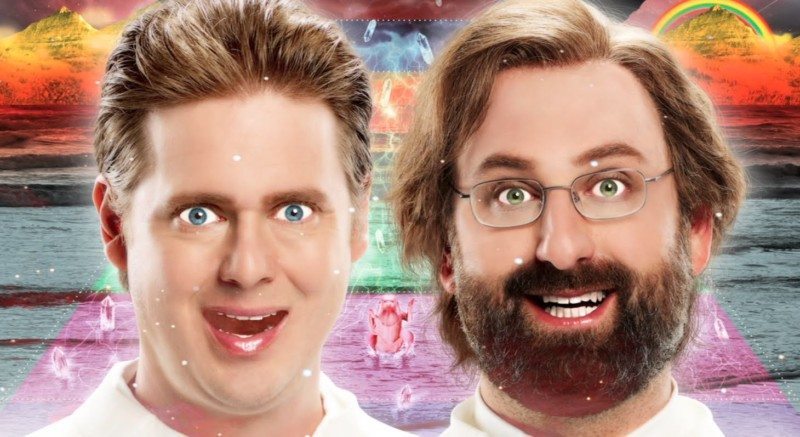 Did this video make you laugh? If not, then congratulations: you don’t like Tim and Eric! But at least 3 million people disagree with you.

So, what the hell is going on?

Tim and Eric is a longstanding comedy duo between best friends Tim Heidecker and Eric Wareheim. Known for their surreal, gross, confusing, and intentionally campy humor, “Tim and Eric” is a familiar phrase to anyone who grew up with Adult Swim. They got their big break in 2004 with TOM GOES TO THE MAYOR, but they didn’t become household names until the debut of their flagship series, “TIM AND ERIC AWESOME SHOW: GREAT JOB!”. Despite their massive success over the past 10 years, they’re still  very polarizing figures—their brand of humor is an acquired taste at best. Even people who like them describe their comedy as more akin to watching a train wreck than anything else.  I personally started out hating them, but I’ve slowly grown obsessed with their bizarre comedy over the past few months.

So I want to understand exactly what’s wrong with me. Why do people love Tim and Eric? Where does the humor come from? What does this mean for comedy in general?

First, we need to come to an understanding of what comedy is. I’m of the school of thought that all humor is rooted in some form of suffering. Humor is how we cope with the nonsense of the world; it’s a positive reaction to something that logically should just frustrate or befuddle you. It can be argued that one of the most relatable forms of suffering is confusion. I think this is what lies at the heart of Tim and Eric’s comedy. Whether you find it funny or not, that “Sit on You” video probably left you with more than a few questions. Who let this guy put this on the air? Why are his victims only mildly annoyed by his antics? Has he killed before? Tim and Eric are masters of confusing comedy, and after watching one of their skits, there’s three fundamental questions you’re likely to ask.

My grandfather loves Adult Swim, but mostly for the cartoons like AMERICAN DAD and FAMILY GUY. Whenever Tim and Eric comes on, he quickly becomes confused and frustrated at the “weird infomercials” that keep playing.

This is the Tim and Eric experience in a nutshell. You’re flipping through the channels, or you fell asleep with the TV on, and suddenly you’re assaulted by bizarre, disturbing, and gross infomercials. You have no idea what’s going on, nothing you’re seeing makes sense, and you’ll probably assume you’re having some sort of fever dream. By the time you realize what you’re seeing is real, you’ll no doubt be left with a haze of confusion and a number of concerns.

I never got into Tim and Eric until I realized that this was entirely intentional. The show itself is a troll designed to make you wonder why it exists in the first place.

A lot of people try to find some deeper meaning, or method to the madness to Tim and Eric’s comedy. On Youtube, you’ll often see numerous comments trying to “dissect” the videos, looking for something symbolic or intelligent. While there may be some vague subtext in a few of the skits, by and large the only purpose is to make you over-analyze it. The show knows you want to understand it, and it’s laughing in your face for trying.

READ: Why is independence so important in our pop-culture?

Once you realize you’ve been duped, a lot of Tim and Eric’s humor comes from imagining other people going through the same process as you. Picture your conservative aunt minding her own business, only for this to pop up on the TV screen.

2. How does this world work?

The world in which Tim and Eric’s skits take place is as terrifying as it is intriguing. Their skits are supposed to look like public access programs – low-budget, non-curated television shows – that have gone horribly awry,  But there’s something else happening here. Take a second look at the previous video. There’s a lot of stuff here that doesn’t add up. How does moaning and talking about nachos help your baby? Are these women being held under duress? For that matter, is this actually an accepted thing within the world of the show? Or is it just supposed to be some creepy found-footage from your neighbor’s basement? Trying to understand the world of Tim and Eric is like trying to assemble a jigsaw puzzle that’s also a magic-eye painting. You don’t even know if you’re really solving anything, and it’s probably just nonsense.

But honestly, that’s half the fun: trying to figure out how this all fits together, how a world could function with lunatics like this running around is one of the most hilarious things for Tim and Eric fans to think about. Just take a look at this ad for the “Cinco I Jammer”.

What starts off as a strange kid’s toy quickly devolves into some sort of alien brainwashing program. This is supposed to be a commercial, something that will encourage you to buy this for your children. Notice how the adults seem completely fine with what’s happening. 12 year olds having seizures on the floor and eating watery oatmeal with their hands is just an average Tuesday for these parents. The way things escalate, and the way no one in this world reacts the way they should to the insanity, is part of the magic. Trying to make sense of the madness and put it all in context is part of what makes Tim and Eric skits so much fun to watch.

READ: Do’s and Dont’s for Time Travel in Television

3. What is wrong with these people?

So, we’ve explored the world in which the show takes place, but have you noticed something about the actual actors that are cast for these roles?

Yeah, something’s wrong with these people. They don’t talk right, they look like random people who were picked up off the street, it seems like all their lines are delivered on the first take. You often find yourself wondering if these people are in on the joke, or if they have no idea what’s actually happening. Are Tim and Eric just giving them bad direction? Or are these people genuinely crazy?

I think it’s a little bit of both.

READ: Tired of TV Bad-Boys? Well so are we.

The celebrities who appear on the show are often even more disturbing than the amateur actors. Being on Tim and Eric has become almost a rite of passage for comedians and actors who you would never expect to see on a show this campy and low-budget. Will Farrel, Zack Galifanakas, Michael Cera, Paul Rudd, and others have all made guest appearances on the show, often in leading roles. There’s a sick fascination in seeing these famous and respectable personalities taken down to Tim and Eric’s level. My personal favorite is SNL’s Will Forte, who always plays seemingly kind but secretly disturbed individuals. Here’s an example:

Have fun sleeping tonight, kids! Whether they’re celebrities or amateurs, these performances are just mesmerizing to watch. It’s oddly satisfying to see them stumble over their lines, speak unnaturally, and generally butcher the fine art of acting. You can’t help but wonder where these people came from, and what led to their deranged performances.  The bizarre performances and the stories behind them are definitely one of the major reasons people enjoy Tim and Eric’s comedy.

Tim and Eric’s peculiar sense of humor works in its own peculiar way. It may not conform to your particular tastes, but it’s clear that it’s built upon the same foundations of all comedy: suffering, frustration, and confusion. There’s a method to the madness of Tim and Eric’s comedy, and even if you don’t like it, hopefully you can see why so many people do.