Rarely do I come into a new series with high expectations. Most of the time, I correctly assume that I will find something that bothers me here and there. So I was pleasantly surprised when I finished CRY HAVOC, a series that is so incredibly well structured and compelling that each issue made me hunger for more.

Written by Simon Spurrier, CRY HAVOC takes us through Louise (Lou) Canton’s journey as she becomes a werewolf. It’s not exactly a werewolf in the way we see in the TWILIGHT or UNDERWORLD franchises. The werewolf here is a bit…unique. The characters populating CRY HAVOC embody myths; in Lou’s case, she’s the Black Hound.

READ: Go back and read our review of one of the best CRY HAVOC issues!

To tell this story, Spurrier splits the narrative into three parts (or acts, for you movie lovers) set in three different locations and three different timelines. Each issue in the series weaves all three parts together to further the story. In general, this style can be problematic for the readers at times, as the split narrative can be hard to follow. I find that this storytelling technique hurts the narrative and annoys me when it is not done well, which is often. Spurrier, though, is able to masterfully weave the three parts together to make the reader want to know more about each individual timeline as well as the overarching story. 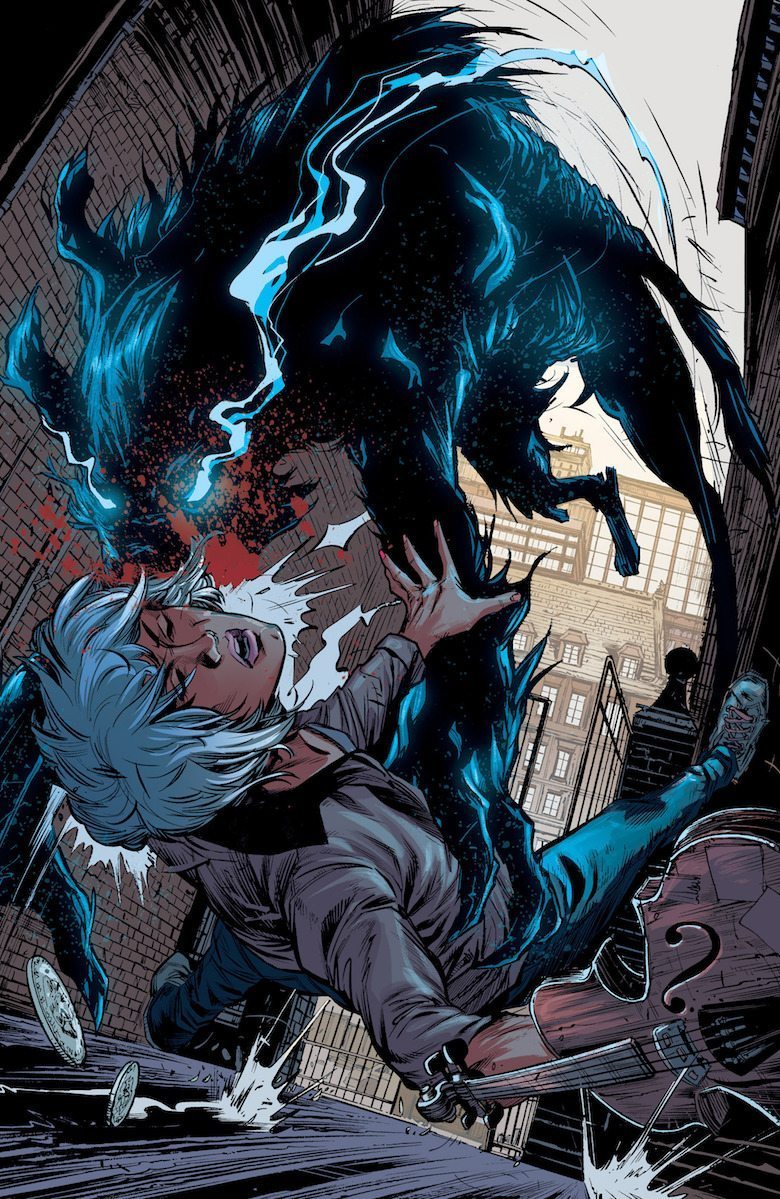 The first part involves Lou’s life in London. She is in a serious relationship with her girlfriend and is a struggling musician when she becomes a werewolf. Her relationship becomes more and more strained as she deals with her new transformation and insecurities, leading to several encounters with a seemingly random gentleman.

The second timeline involves Lou’s adventure in Afghanistan after she discovers her abilities. A government agency has offered to cure her werewolf problem in exchange for using her powers to hunt down a rogue agent, who can also transform into a mythological being. Lou agrees and teams up with a few others with the transformative abilities like her.

The third and final interwoven section is called “Red Place.” On the first page of CRY HAVOC #1, the story begins at the end. Lou is in a jail cell within the Red Place. She has been captured by the woman she came to hunt down. 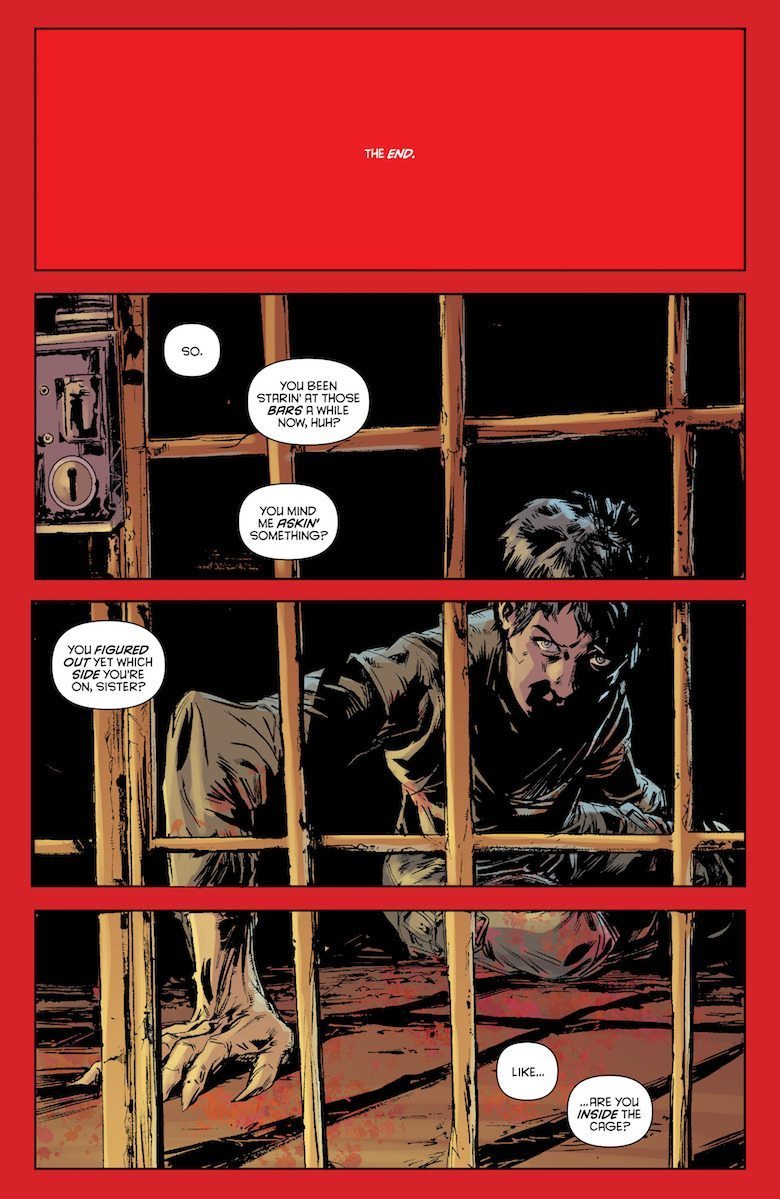 My favorite aspect of the story is Spurrier’s play at devil’s advocate. Throughout the story arc, Lou is faced with questions on what exactly is right and wrong and who in the story is good and bad. Because she is recruited by a government organization, INHAND ORG, she assumes that she’s on the right side of a conflict. While in Afghanistan, Lou calls the residents and myth-monsters “savages” and criticizes their actions. The situations, though, turn out to be a bit more complicated. Both sides have their own motives and perceptions that do not prescribe to black and white, just like all conflicts.

READ: Image Comics is awesome! Find out why the publisher is so awesome here!

The art by Ryan Kelly in the series is mesmerizing. Everything seems to be done very well, but the highlight in the series are the transformations. They are simultaneously beautiful and monstrous, which is not an easy feat to accomplish. I was also impressed with the coloring in the series. Each of the three parts in the story has a different color scheme attributed to it: The first part has shades of turquoise and blue that are emphasized Lou’s hair and the werewolf, the second part is gritty and dirty with yellow and brown coloring, and the Red Place is, well, soaked in red. 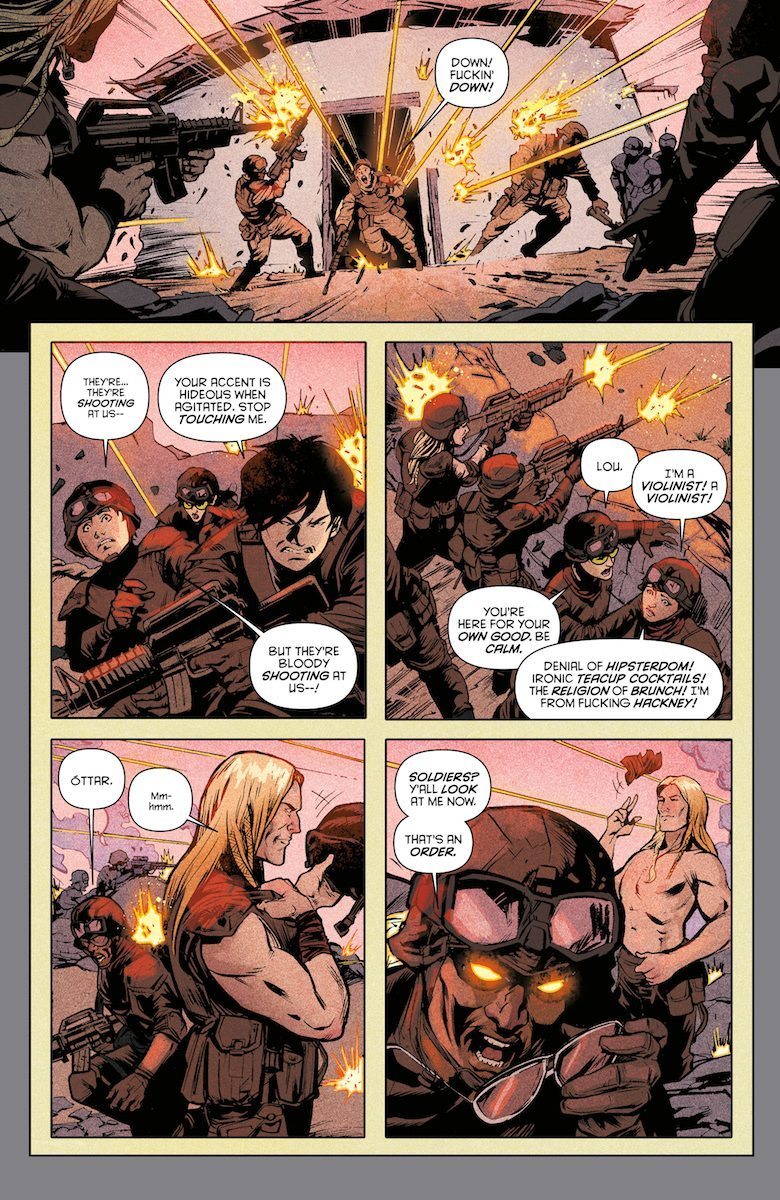 CRY HAVOC has become one of my favorite series to date. It is an impressive tale of myths and stories that I have not read before. It also feels like Spurrier put a lot of heart and soul into this comic, which is evidenced by his 13 Days of Myth-mas to give readers a better understanding of the myths he refers to in the series. This is a fantastic first six issues to read and will be a great trade to pick up in August. I have no doubt that, going forward, the series will continue to impress.