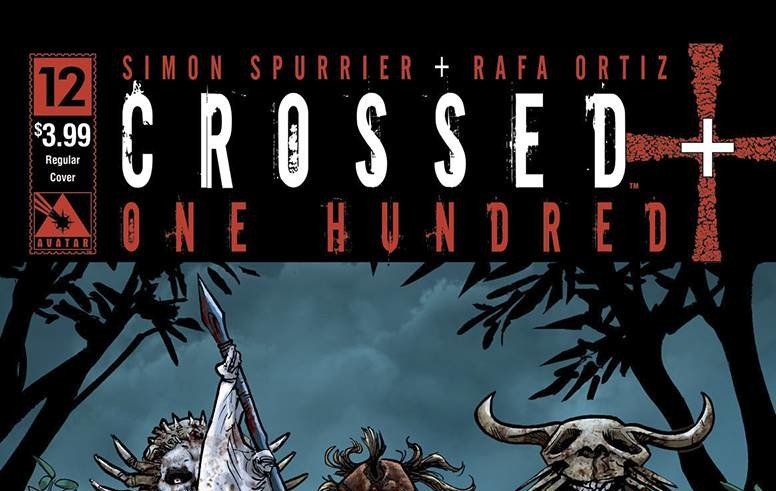 The future is here, and its name is CROSSED. The story that began with Garth Ennis’ original mini-series and expanded into the dynamic and delightfully disturbing CROSSED: BADLANDS has come to a full realization in CROSSED + 100. It is in this series, that the true nature of survival, hope, society and destruction are explored. In this series, the moment one feels the safe and secure is also the moment of greatest weakness.

For those unfamiliar with the CROSSED universe, it isn’t difficult to grasp; picture a WALKING DEAD type disaster scenario, only millions of times more horrifying. Those infected by the Crossed are not Zombies searching for humans to feed on, but the actual physical embodiment of all the darkness that is humanity. Crossed might eat you, but not before they’ve taken the time to torture, rape, and mutilate you. The real horror is that unlike Zombies, Crossed still possess intelligence and skills from their previous life; they can plan, they can set traps, and they understand psychological torture. In this world, hope can get you killed, and the only logical personal investment is in survival by any means necessary.

CROSSED + 100 takes place 100 years after the initial Crossed outbreak. Humanity has managed to survive the devastation slowly but steadily and is finally attempting to settle down and recreate civilization. The human population has begun to increase as people find themselves comfortable enough to have children out of choice while the Crossed population is almost vanishing from existence due to a lack of personal care and the spread of diseases such as AIDS. Simon Spurrier has described this new world as a type of paradise, or a post-apocalyptic Eden, where humanity has been given a second chance at life without the various constraints of society as it was before.

READ: Are comic books no longer addressing real life social issues? Check out our theory on why X-Men is less and less socially engaged!

The first arc of CROSSED + 100 (written and designed by the legendary Alan Moore), follows archivist Future Taylor and the various survivors at the settlement “Chooga” (what was once Chattanooga, Tennessee). While out archiving books and materials from a century before, Taylor and her gang continuously run into Crossed and strange altars. They are inexperienced with Crossed, believing the population to have been wiped out, but they continue to investigate their existence. Eventually, Taylor discovers that there was a small band of Crossed who were culled and trained by a super-intelligent Crossed to survive inevitable doom. Before Taylor could stop a horrific plan of conquest 100 years in the making, Chooga was overrun and taken over by Crossed, thanks to a traitor in her group. With no choice and no home, she flees and escapes the devastating holocaust.

Simon Spurrier continued the story following Moore’s plentiful and detailed notes on the universe and the future for the Crossed. A year following the fall of Chooga, Taylor is living at another settlement and is having tremendous difficulty coping with the trauma she experienced. Furthermore, she is struggling to have her voice and concerns heard, as the political and religious leaders of the settlement don’t consider her claims of intelligent Crossed to be legitimate. Even after gathering insurmountable evidence that the Crossed are organized and an extremely dangerous threat, her requests are denied, and her theories are discredited. Alas, everything came crashing down at the end of issue #11. Crossed appeared at the settlement’s gate shrouded in headdresses made of bone, viscera, and human genitals. These Crossed demanded a portion of the humans food, the destruction of all forms of communication, and the donation of seven girls or women and three men or boys.

Issue twelve, the finale for this arc, shows the humans of the Murfreesboro settlement striking back and is a positive change from the hopelessness and doom that felt impending. It seemed all was lost for these survivors after the events of issue eleven. After the Crossed announce their demand for tribute, the entire settlement is in shock and panic, including Future Taylor. In her moment of defeat and surrender, she is offered an opportunity to save the settlement by recent refugees (whom she initially suspected may be infected in disguise). Once she believes she can trust them, she helps them gain access to the settlement’s weapon stash, and they take over and begin to implement their plan. While the refugees plan seems, at first, cruel and giving into the Crossed demands for tribute, they have created an elaborate and cunning trap. Without giving away too many details, the humans are able to strike back in a big way, and Taylor meets her destiny face to face.

It’s been a truly amazing experience to see Simon Spurrier evolve as a writer within the CROSSED universe. It didn’t seem possible that anyone could take such a dense, original concept first conceived by Alan Moore, the OG of intellectual comics, and turn it into something that feels all their own. Spurrier’s writing in CROSSED + 100, and in this issue, in particular, is some of his strongest and most critical work to date, even surpassing the honest, brutal brilliance of his CROSSED: WISH YOU WERE HERE webcomic. He crafted this issue into a complete game changer in the overall series. Every issue up to this point has been focusing on coping with trauma or impending doom at the hands of the Crossed. At a time when all hope seemed lost, and Future Taylor is at her worst, she is unwittingly given a chance to strike back, restoring some decency and power back to herself and her fellow survivors.

READ: If you like post-apocalyptic stories with zombies and violence, you’ll probably want to check out what’s happening in WALKING DEAD!

Spurrier’s shining moment in this issue takes place before the tribute and the retaliation against the Crossed army. Taylor is stuck feeling scared, numb, and completely unsure of herself. She is not entirely aware of what the plan is, but she knows that if it fails, then there are only two possible outcomes: she dies horribly or lives in horror, left as something less than human. She is expressing this in her journal (which has been used as the narration device for all twelve issues so far) when she breaks down. “I think I’m sick of you. I think I’m sick of me and my words. I think, most, that if there’s a zero point skulking in the future, then there’s a…zero point archiving the now. So no more later. Ever. AFAWK.”

Here, she is faced with the futility of keeping a journal, of archiving the past, and of looking forward to the future. The destruction of her journal, and, therefore, the narration that is the reader’s link to her mind, represents Taylor’s last-ditch effort for base survival. To live through the upcoming horrors, she must disassociate herself from the ultimate wishful fiction; hope. The beautiful irony being that after burying her journal, she experiences actualized hope for the first time, in the calculated counter-attack on the Crossed.

Issue twelve is complimented by fantastic artwork done by Rafa Ortiz, whose care to detail brought the post-apocalyptic Murfreesboro settlement to life. Ortiz’ work is a welcome change from Fernando Heinz (who did the first three issues of this arc). While Heinz’ illustrations seemed too cartoon-like for the harsh realities of the CROSSED universe, Ortiz is able to draw a dynamic depiction of humans, Crossed, and everything in between. He has tremendous range when it comes to expressing changing moods and tension. His strongest work in this issue may be the ending battle sequence, which is drenched in beautiful explosions and riddled with bullets, blood, and various Crossed body parts. My only problem with the art of this second arc is that it lacks the consistency of the first (brilliantly executed by Gabriel Andrade).

CROSSED + 100 took an unexpected yet welcome turn in this issue that will leave you begging for more. There are even more secrets and surprises lurking within issue twelve that haven’t been alluded to, so be sure to catch up on this series and be prepared for the unrelenting horror of a Crossed Future. Issue thirteen will be released soon enough and will take an, even more, drastic leap as the story follows Future Taylor five years after the events of this issue. Simon Spurrier and Alan Moore aren’t yet done dishing out work from this unique and twisted universe, diving further and further into the future. Let’s hope they don’t stop anytime soon.

READ: Get an inside scoop on what will be coming next from the CROSSED universe and from AVATAR PRESS!