The plot of CRAWL SPACE is a simple one: in a young girl’s basement sits a washer and dryer, and therein lies a gateway to a higher realm. This new and inventive story is brought to you by Jesse Jacobs, the writer and illustrator. He made his debut in 2012 with BY THIS SHALL YOU KNOW HIM which was followed by SAFARI HONEYMOON in 2014. Before I even started reading, what stood out most about CRAWL SPACE was its art and use of vibrant color. It screams psychedelia.  I’m normally not a fan of that rainbow neon color scheme, but this graphic novel uses it so well I really felt entranced by every illustration, especially the depictions of multiple realms of the universe. After reading it a few times, I had cultivated many new musings about our relationship with spirituality. 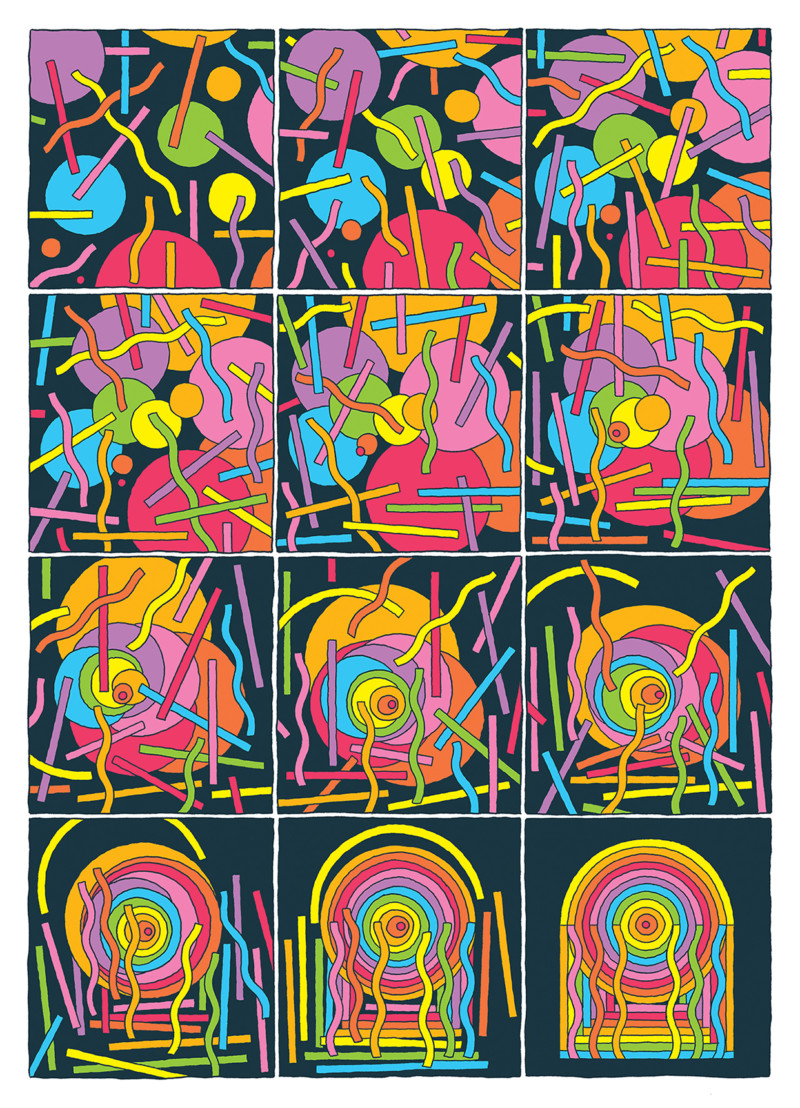 CRAWL SPACE brings up the question of sacredness, and more specifically, the idea of a specifically sacred place. The washing machine is a random portal to another world — you need to be inside it to reach that higher plane. Similarly, there is a common belief that specific places are reserved for spirituality. These include churches, mosques, even ley lines. Humans have always attached supernatural meaning to objects. A building can become a house of worship, a place for a community to grow. A place where the dead rest can become hallowed ground. Objects transmute: wine becomes blood and wafers become a body. I particularly enjoy the fact that an average, rather mundane appliance such as the washer and dryer opens the portal to another world. It falls in line with one of the overarching themes I found in the novel: finding nirvana in the midst of everyday things. 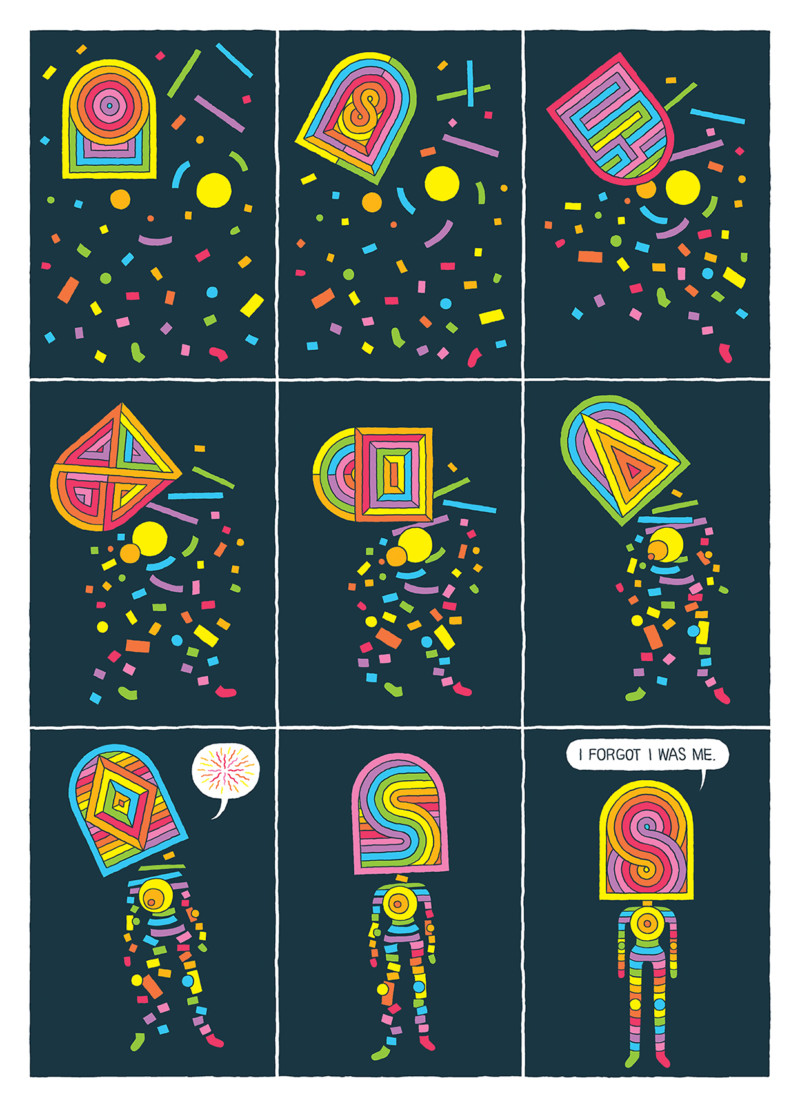 All the psychedelia, of course, brings to mind hallucinatory drugs. Substances such as mushrooms, peyote, and ayahuasca have been used historically for spiritual journeys. As we see in the novel, the exploitation of the washing machine, like the abuse of drugs, has various effects on these adolescents. Some are indifferent, some appreciate the journey, and others put themselves in danger as they overuse and abuse.

It’s no wonder these children long for an otherworldly experience. They live in the peak of American normalcy — the suburbs. The artist draws the bland suburban world in black and white. It’s monotonous and dreary through lack of color, while the higher realm is made of astounding rainbow hues. 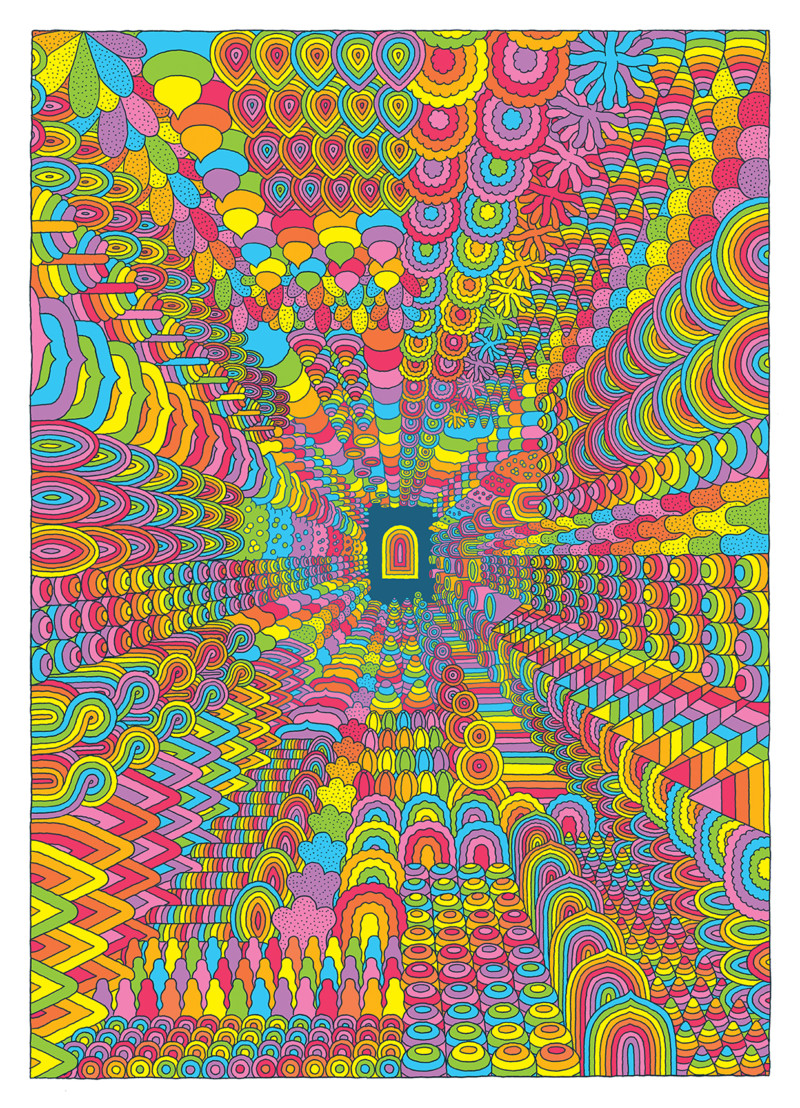 One of the interesting rules about the washing machine is that the person entering the other realm has to be “innocent.” Some of the neighborhood children are unable to reach that higher plane, perhaps due to loss of said purity. All of the characters seem to be in the transitional phase between child and adult, and even innocent and not. In fact, we never adults at all.

At this point in their lives, children still have their imagination. More importantly to this story, they still have their spiritual imagination. Concrete religious and moral guidelines have not imprinted themselves into their minds, for the most part. Their eagerness to try something new, to explore, to experience presents a stark contrast to stereotypical suburbia and its homogeneity.

CRAWL SPACE seems to suggest that this innocent, all-encompassing spirituality is something absent in modern day suburbia. The model of these neighborhoods was based on the original suburb of Levittown built in the 1950s. Innovators created them specifically with sameness in mind. They designed these areas to be consistent and predictable. This is very much unlike the mysterious, mind-altering space of the washer and dryer. And unfortunately, it hasn’t changed much since. For these children, here is a place to finally to explore something new.

There is a definite emphasis on the importance of breaking away from homogeneity. I felt this black and white suburban landscape was a metaphor for a larger sense of banality many people find themselves feeling today. The endless cycle of schooling followed by the endless cycle of work. It can be mundane and suffocating. CRAWL SPACE reminds us that there is beauty and experience still in the world, though we must remain open and innocent enough to feel it.

WATCH: Looking for more indie goodness? Here’s a video about the best indie comics of 2016!

Though I feel this novel purposefully has little character development so as to allow the reader to put themselves in any of their shoes, I would love to see a deeper exploration of the kids and their lives. Readers who don’t dig deep into comics might not understand the greater nuance here about spirituality and philosophy. To connect with them, more dynamic characters and a more straightforward plot could illuminate more questions and musings.

Despite this potential for growth, CRAWL SPACE conjures up deep questions all while being subtle and beautifully illustrated. In fact, its subtlety and seemingly shallow premise mirror its deeper themes: Something as unassuming as a comic book, or a washing machine, may hold something beautiful and memorable inside.

CRAWL SPACE, by Jesse Jacobs, releases in May 2017 by Koyama Press. For more information, look here.