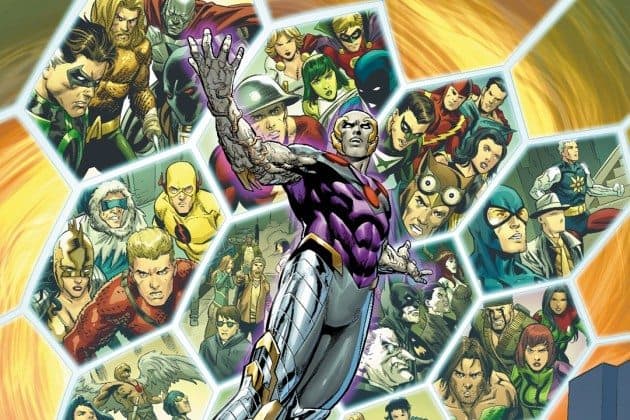 Continuing our run through Convergence, what happened in week two?

First and foremost, readers, I’d like to offer a quick word of apology for the lateness of this episode.  A family / health issue caused a delay, and I appreciate your patience.

With that out of the way, let’s leap into the second full week of DC’s massive 2015 event! I’ve been looking forward to this week for a while now, as I’m personally a big fan of mid-1990’s era DC Comics, so my expectations for this week’s tie-in minis were even higher than last week. However before we see if they delivered, let’s look at the issue of the main Convergence series that was released this week.

The second issue of the proper Convergence mini-series kicks off with a flashback to Darkseid’s seemingly final victory over Earth 2 in the Earth 2: World’s End mini-series, but told from that Dick Grayson’s POV. The sequence does an admirable job establishing Earth 2 Dick’s character for readers unfamiliar with that version of the character. From there, the book rejoins the New 52 Earth 2 heroes (Flash, Green Lantern, Superman, Batman, Dick, and Yolanda Martinez) as captives of Telos, forced to watch various battles in his competition. After seeing a particularly violent fight where a cyborg Justice League from an OMAC-controlled city slaughtered an alternate universe Justice League, Earth 2 Superman breaks the heroes from their confinement and the fight is on.

The heroes have little effect on Telos, and as a last resort Earth 2’s Green Lantern taps into the very power of Telos’ planet and blasts him. While the attack doesn’t destroy him, he does abandon the battle. Green Lantern then tells the others that there’s something Telos fears, and to find it they must find an abandoned city. Lantern, Flash, Superman, and Yolanda go off to find said city, while Batman recruits Grayson to a explore a nearby version of Gotham to find some potential allies. The two end up in the Batcave of the Pre-Flashpoint Gotham City, where Thomas Wayne (who became the Batman of Earth 2 after that universes version of his son died) meets the traditional Bruce Wayne version of the Dark Knight. Meanwhile, the other Earth 2 heroes stumble across a version of Deimos who says he can get them off the planet, setting up the issues cliffhanger.

Convergence #2 is an improvement over the two issues that proceeded it, however that isn’t saying much. The issues does advance the plot further than the previous two combined, setting the Earth 2 heroes on a mission to locate Telo’s weakness and gives the series its first major protagonist in the form of Earth 2 Dick Grayson. However, these improvements can’t hide the fact that the entire Convergence concept is still lacking coherence, and Telos as a villain still seems like nothing more than a plot device. The writing of the issue is overwrought, with King using way too much narration from Grayson, with much of it taking the form of foreshadowing for later in the series. The meeting between the two Bat-Men, which should be the emotional center of the comic, suffers greatly from this over-narration. It’s taken from what should be an epic moment to something mediocre. The art is once again passable, but nothing more, and there’s a major consistency issue with Pre-Flashpoint Batman’s costume in the later pages that’s truly distracting.

Convergence: Green Arrow #1 starts off by immediately reintroducing its readers to the Pre-New 52 version of Oliver Queen. Instead of the younger, television series-inspired character they’ve seen since 2011, they get the classic elder-goateed Green Arrow stopping a crazed-domed in resident of Metropolis from committing suicide, while sardonically commenting to himself that he can offer the man no real hope, as no one can figure out how to breach the dome.

From there, the scene shifts to a young ethnic family being terrorized by a group of white supremacists. They’re saved by Connor Hawke, Oliver Queens son and the character who held the mantle of Green Arrow following Ollie’s death in the mid-late 90’s. Connor takes the family back to a safe-house he’s constructed, based on the Ashram where he grew up. Along the way Connor finds one of Ollie’s arrows and realizes his father is trapped in Metropolis as well. Members of the white supremacist group, The Brothers of Purity, learn the location of the Ashram and attack. Connor, realizing he can’t fight them off on his own sends off several flares in the shape of green arrow. Getting the message, Ollie arrives and the two quickly dispatch the hate group.

It’s then that Connor reveals his parentage to Ollie, as the dome had fallen over Metropolis before Connor had told him in the previously existing timeline. Initially Ollie attempts to leave, telling Connor that he’d abandoned him as a baby and that he didn’t deserve to know him him now, with his son retorting that Ollie would just be making the same mistake a second time. Their argument is brought to a halt by Telos’ now familiar announcement of his competition and the lowering of the dome. The two are then suddenly transported to a seemingly empty version of Metropolis where they encounter the Kingdom Come versions of Black Canary and the daughter of that universe’s Canary and Green Arrow to end the issue.

Convergence: Green Arrow #1 is a very strong comic. Writer Christy Marx is able to accurately capture Ollie Queen and Connor Hawke as they were written during the Zero Hour period, and the interactions between the two ring true. The plot moves along at a steady pace, and while the white supremacist group may have seemed out of place in any other book, it fits in GA due to the title’s history of tackling similar issues. The issue’s cliffhanger ending sets up an interesting confrontation, with much higher personal stakes than most of the other Convergence battles. Rags Morales art is another standout feature, and for my money it makes Green Arrow the best looking Convergence book released so far.

Convergence: Superboy #1 is another solid entry into the Week 2 Convergence field. Since this issue’s Metropolis is set roughly around the time of Zero Hour, this version of Superboy is strictly a teenaged clone of Superman, leather jacket and all, created by Cadmus Labs following the Man of Steel’s death at the hands of Doomsday. For the year Metropolis has been under the dome, Cadmus has been attempting to restore his powers to no avail, leaving Kon-El depressed at his inability to help. While visiting the Superman memorial statue in Metropolis Park, Telos’ message plays and the dome falls, granting Superboy his powers back. Shortly thereafter, he’s lured to abandoned part of the city by the Kingdom Come Universe’s versions of Dick Grayson and Wally West. The three battle, but just as Kon gets the upper hand, he hears a voice telling him that to save two versions of Metropolis he must stand down, and he turns to find the Kingdom Come version of Superman hovering above him, ending the issue.

Convergence: Superboy #1 is a a sturdy, but unspectacular comic. The story follows the same basic blueprint as the other Convergence tie-ins without the flourishes that make the better books shine. The characters are presented well, and Superboy’s 90’s persona is spot-on for the period, but we don’t get much about him below the surface that he was depressed he lost his powers. The fight scenes with the Kingdom characters play-out well though, and the ending confrontation with KC Superman creates a good hook for next issue, especially since Superboy with his earring and leather jacket look was the exact kind of brash character that KC was published in reaction to.

I have to start this off by making the admission that Convergence: Green Lantern/Parallax #1 is one of the hardest Convergence books for me to give an unbiased review to, as mid-90’s Green Lantern comics starring Kyle Rayner was the title that made me a comics fan as a child, and Rayner remains on of my all-time favorite characters. That said, Green Lantern/Parallax #1 is a good comic that could have been great with some minor tweaks. The issue starts with a de-powered Kyle Rayner visiting an equally de-powered Hal Jordan in prison, where Hal has voluntarily locked himself over guilt about his actions as Parallax that destroyed the Green Lantern Corps. Kyle tells Hal that those actions were taken by Parallax not Jordan and that he should stop feeling guilty over them, a nod to the later retcon of Parallax being a fear entity who took over Hal as opposed to Hal himself, but Hal will hear none of it. Kyle is crestfallen, and leaves the police station thinking of Hal and his late girlfriend Alex, who was killed shortly before the dome fell. Just then, Telos’ announcement plays, the dome falls, and Kyle and Hal both get their powers back, with Hal reverting to his Parallax personality. Kyle attempts to talk some sense into him, but is blasted out of the sky by an attacking Lady Fern of Electropolis, the home of Lady Quark and Lord Volt of Crisis on Infinite Earths fame. With Kyle incapacitated, Hal tears through Fern and her army and then takes off for Electropolis himself, aiming to destroy it .

Convergence: Green Lantern/Parallax #1 is at its best when exploring the relationship between the two titular characters. The idea of Kyle visiting Hal in prison attempting to get him to let go of his guilt is an interesting one, and could have gotten more panel time. In general, Kyle is taken out of the story too quickly once the battle begins, leaving Hal as Parallax solely acting as megalomaniacal and evil without any counterbalance.

-Batman: Shadow of The Bat by Larry Hama and Philip Tan

-Superman: The Man of Steel by Louise Simonson and June Brigman
The second week of Convergence was an slight upgrade over the first when it comes to the main title, bringing more action and plot progression but remaining mediocre in its execution. The mini-series’ are about on par with the previous week as far as varying quality, however they suffer from the overall repetitiveness of the concept. Each story plays out in nearly exactly the same way. Character’s dome status quo is briefly introduced, Telos’ announcement is made, the dome falls and the character gets his powers back, their battle begins. While the better Convergence books, such as this week’s Green Arrow or last week’s Nightwing/Oracle work well within those constraints, they’re still present. Next week’s Convergence lineup is based arounf the Crisis on Infinite Earths period, and includes the book I’m looking forward to most in the whole event; Marv Wolfman’s return to The New Teen Titans. Also, my Convergence Week 3 column will feature coverage of a Convergence signing at Staten Island’s Comic Book Jones.