After 2 months, a zero issue, seven main issues, and eighty tie-in issues, DC’s 2015 mega event came to it’s conclusion with Convergence #8. Was the series able to offer a worthwhile ending, or did the finale fizzle into mediocrity? Let’s find out. 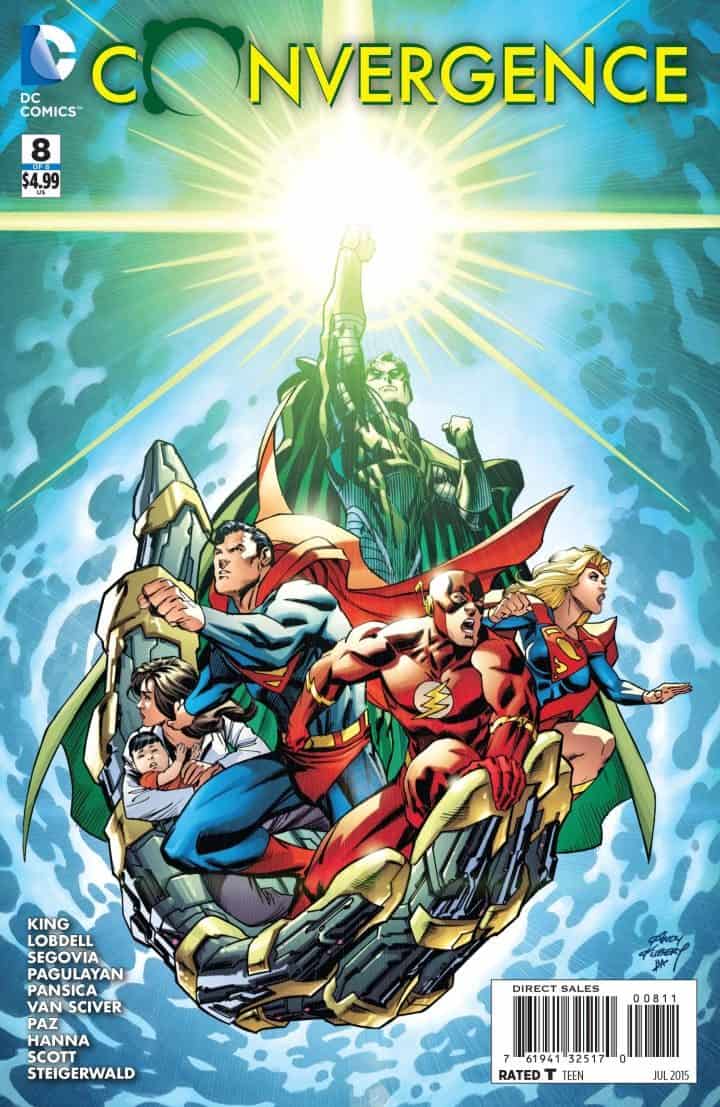 The final issue of Convergence kicks off with the convergence planet on the verge of collapse, as the Zero Hour-era Hal Jordan AKA Parallax’s murder of Deimos had released the time energies he’d gathered, causing the planet to begin tearing through time and space. The heroes debate what to do, with Jordan demanding that he be allowed to “fix” everything himself as he attempted to do during the original Zero Hour event. However Telos subdues him before he can begin, and announces that help is on the way.

The calvary arrives in the form of three of DC’s time-traveling heroes, Booster Gold, his sister Goldstar, and Waverider. Waverider frees Brainiac from his imprisonment, stating that only with his help can the heroes ensure any type of future for reality. The heroes attempt to attack Brainiac, however he brushes them aside. Superman confronts Brainiac with the fact that if Brainiac destroys them he’ll be destroyed as well. Brainiac begins recounting his back story, explaining that in his quest for knowledge he traveled to the edge of the source wall, then into the multiverse itself. After traversing across the multiverse, he emerged mutated by the exposure and simply wishes to return to his old self.

The issue shifts briefly to the New 52 Universe, where the convergence planet has almost fully breached through the dimensional divide. Most of the Superheroes who were gathered there have returned to their homes to spend their potential final moments with their families, leaving Superman and Supergirl hovering over the planet. Kara wonders if they should say goodbye while they have the chance, but her cousin is reluctant, saying they must hold on to hope.

Back on the planet, Brainiac begins sending the captured cities back to their home dimensions in an attempt to “reset” the multiverse. However he runs into a problem when he tries to send back the cities stolen from the period surrounding the first Crisis on Infinite Earths. That event’s temporal energies are simply too strong to be reset. Brainiac tells the COIE-era Flash and Supergirl that they must go back and suffer their pre-destined deaths during the Crisis. Zero Hour Hal and Pre-Flashpoint Superman (plus Lois Lane and her and Superman’s newborn child) go with them to help try and save the multiverse. 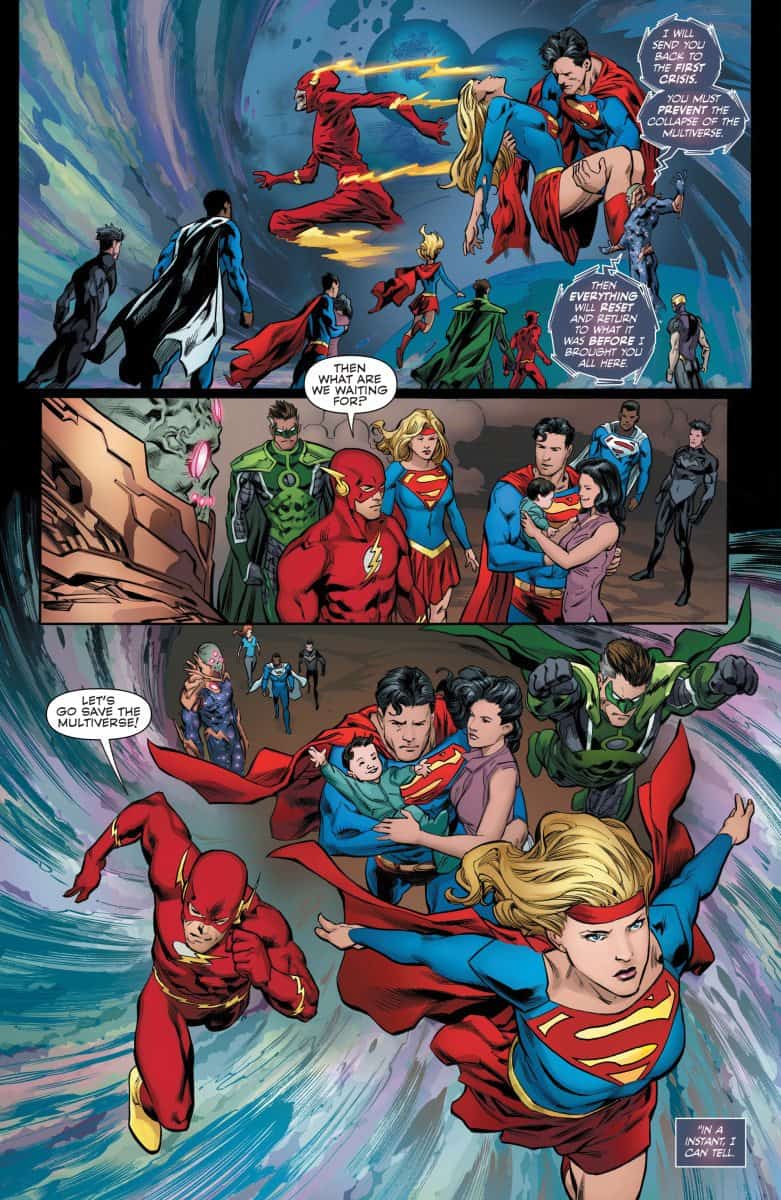 We’re told in narration that they must have succeeded and treated to a four page spread of the newly reborn multiverse, featuring numerous universes including The New 52, a universe of 90’s cahraacters including Impulse and Kyle Rayner, an all-Bizzaro universe, and a universe of Charlton characters amongst others. Brainiac, pleased with his work, leaves with the Earth 2 heroes still marooned on the convergence planet. Telos is able to shift the planet into the Earth 2 Universe, where Green Lantern Alan Scott is able to tap into the planet and terraform it, transforming it into a new home for them. After a brief cameo from the New 52 Superman and Supergirl alluding to a future New 52 Earth 1/2 crossover, the Earth 2 heroes locate the refugees from their destroyed Earth, including Dick Grayson’s son, and bring them to the NEW Earth 2, ending the series on a happy note. 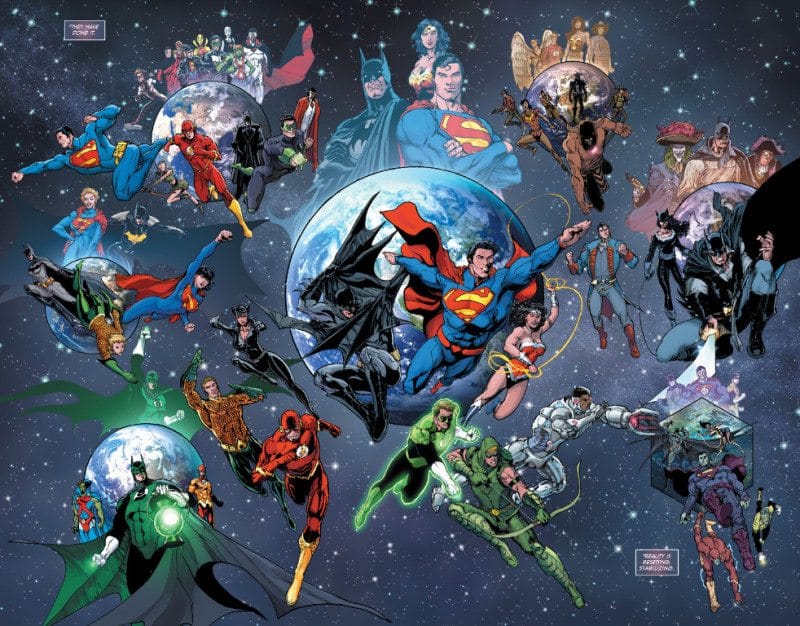 Convergence #8 is a hard comic book to rank. As a single issue, it’s easily one of the best of the series. Though the writing from King and Lobdell is still a bit clunky, it doesn’t have the overbearing narration of previous issues. Plot-wise the issue runs at a brisk pace, doesn’t drag at any key points, and makes a huge change to the very structure of DC’s fictional universe (discussed in detail below). However, the issue fails when looked at as part of the larger series. A majority of it feels disconnected from the rest of the Convergence series. The issue centers on and gets most of it’s plot from Parallax, Brainiac, and Wavrider, characters who were barely featured in the seven preceding issues. Meanwhile the stories of Telos and the Earth 2 JSA, who had been treated as the main characters of the series, are relegated to a minor wrap-up section in the last few pages. 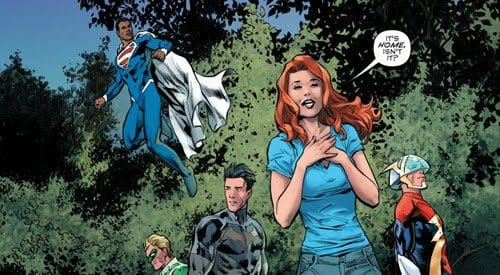 Artistically, the issue is almost impossible to judge. Four pencillers and five inkers are credited, leading to a mish-mash quality. There are no terrible pages, but no truly standout ones either.

Convergence #8 stands out as one of the better single issues of the Convergence mini-series, but it’s seemingly out of nowhere plot-threads and characters combined with the mish-mash of numerous artists hurts the issue considerably.

Overall, DC’s Convergence is definitely a disappointment. The series took an interesting premise that could have been a classic DC event and turned into one that’s mediocre at best. The main mini-series was unfocused, ping-ponging from one antagonist to another but taking no time to suitably build any of them. The tie in books didn’t fare much better. While some of them, notably New Teen Titans, Green Lantern Corps, and Nightwing/Oracle were entertaining, most of them fell into a predictable story pattern that wore thin very quickly. 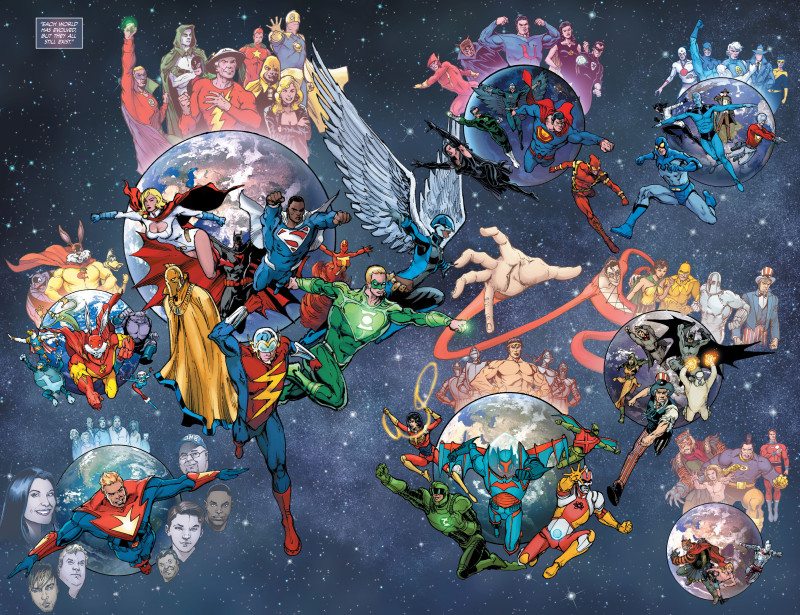 While the series itself didn’t deliver a classic, it’s plot-point of fully reviving the DC Multiverse concept is one that will hopefully be felt for years to come. By putting every single time period and continuity into official canon, DC has opened itself up to literally thousands of story possibilities for everything from on-going series to mini-series to graphic novels. Now characters like Kyle Rayner, Donna Troy, or Wally West who didn’t fit into the New 52 in their original incarnations can be published in new stories without conflicting with DC’s established main continuity.

While Convergence may be done, we here at Comicsverse are just getting started. Stay tuned over the coming weeks and months for coverage of DC’s newly quasi-rebooted universe.