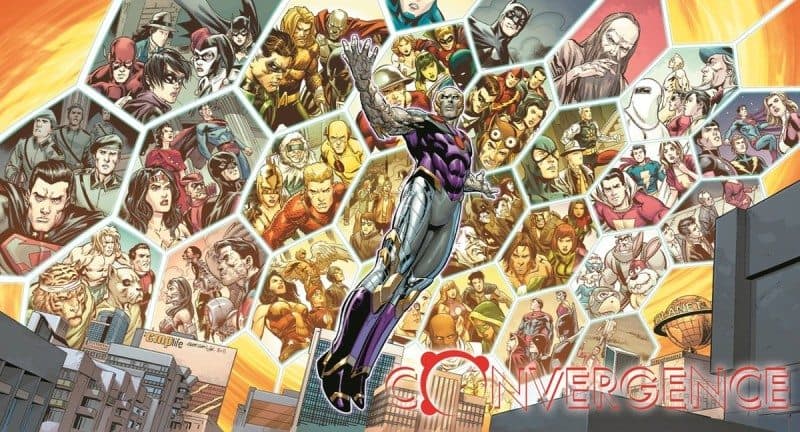 DC Comics’ Convergence mini-series has greatly improved over the previous two issues. This week we find out if issue seven continues that trend, or sends the series into its finale on a down note.  Read on in our Convergence Week 7 Guide! 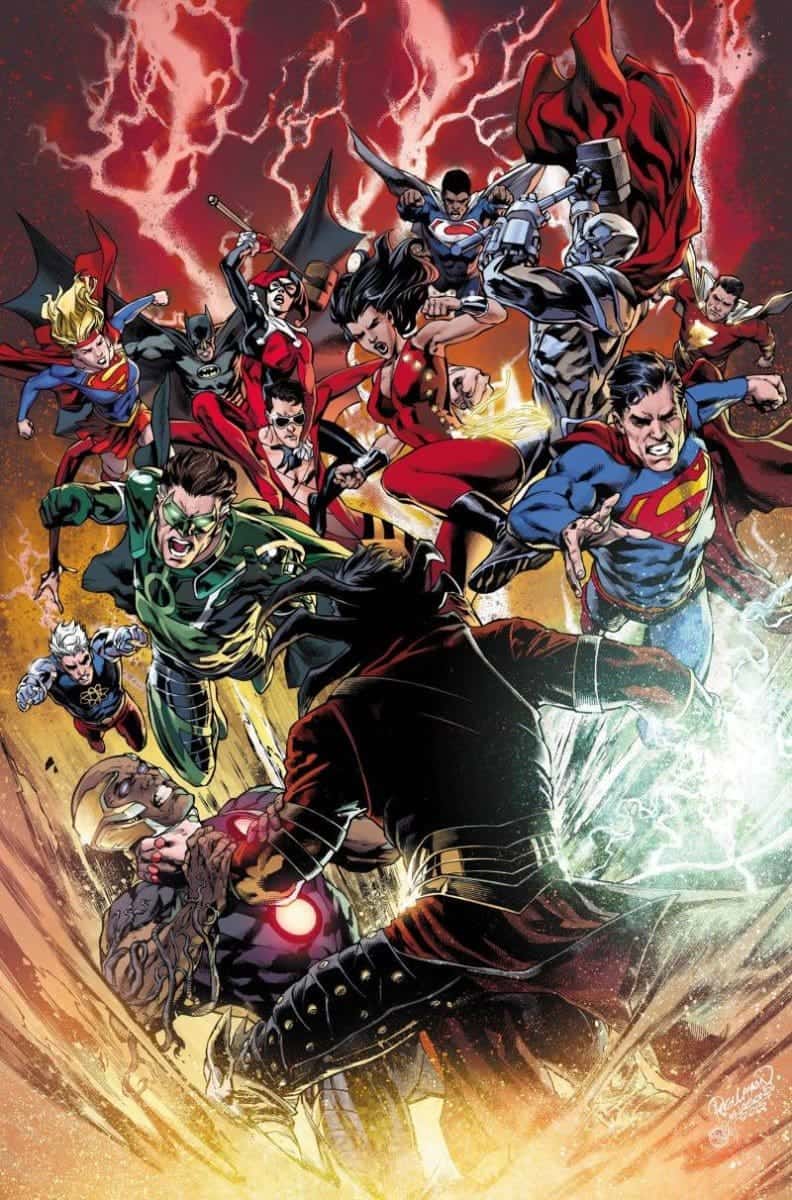 Like it’s predecessor, Convergence #7 opens in the New 52 DC Universe. The Justice League and Oracle (the celestial, all knowing god-like New 52 character with no relation to Barbara Gordon) are attempting to figure out how to deal with the Telos planet literally ripping a hole into their universe. The heroes, including Superman, seem powerless to stop the planet.

The scene shifts to the planet, where the battle between the the collected heroes of the Multiverse and Deimos’ army of chosen minions rages on. The two groups are locked in a stalemate until New 52 Earth 2 Dick Grayson and Telos arrive, with the latter engaging in a fierce battle with Deimos himself. The combat between the two reverberates with temporal multiversal power on and off the planet, including showing the New 52 Superman, Supergirl, and Martian Manhunter various versions of themselves. 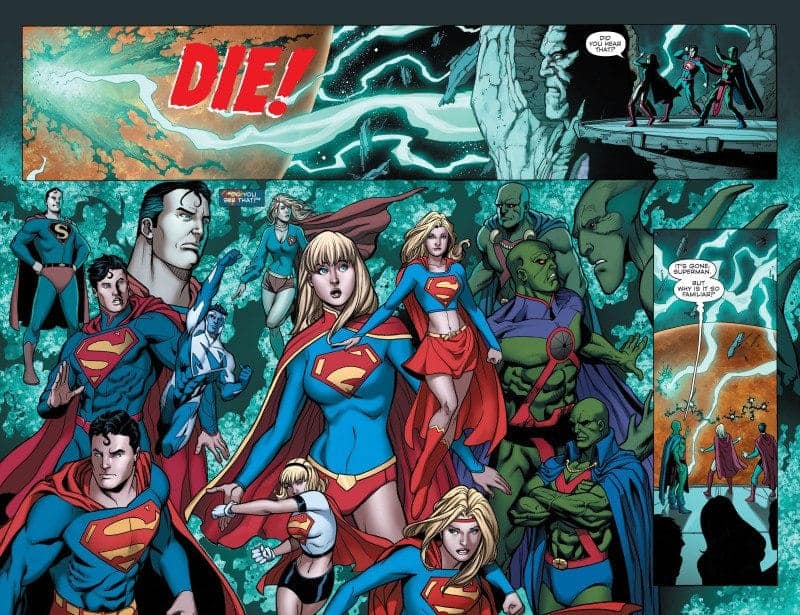 As the two battle, New 52 Earth 2 Wildcat and Dick Grayson begin telling Deimos’ gathered army that he plans to kill them all anyway. As his army stops fighting to process that information, Telos is able to gain the upper hand in battle. He entraps all of Deimos’ soldiers within the planet, vowing to let them free and send them home. Deimos himself is a bit harder to contain and breaks free of Telos’ prison, however he’s killed by Parallax, the Zero Hour era Hal Jordan. The destruction of Deimos releases all of the energy he’d absorbed from the Time Masters earlier in the series, creating an energy wave that starts tearing apart reality. Hovering above the planet, Oracle advises New 52 Superman and and Supergirl of this before he crumbles to pieces, dead. The issue ends with the wave washing over the New 52 heroes, seemingly setting them up to have a big role in the series finale. 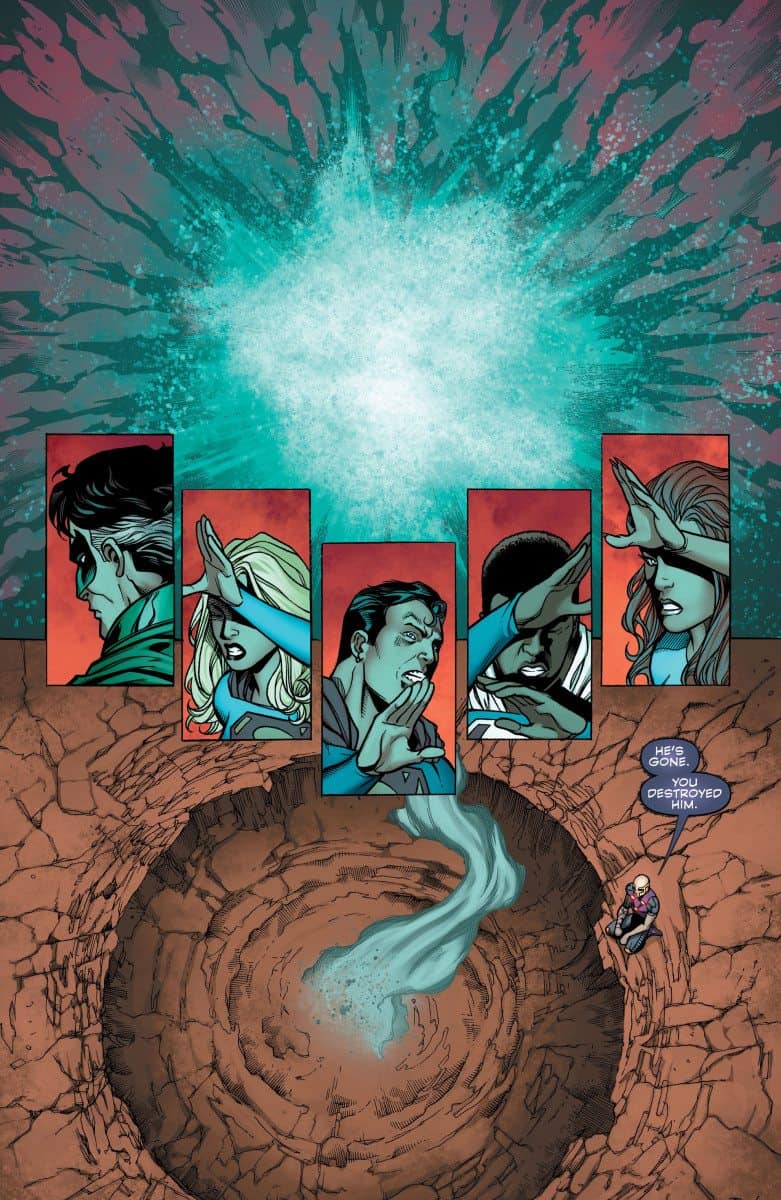 The problems with Convergence #6 come full-circle from those that plagued the series earlier in its run. Instead of the excruciatingly slow plot development seen in the first several issues, the sixth installment blows by way too fast, giving major moments like Superman/Supergirl/Maritan Manhunter seeing all the alternate universe versions of themselves no time to breath. The battle between Deimos’ army and the collected heroic forces of the Multiverse that was built so well last issue is incredibly anticlimactic. Outside of one double-page spread, the battle gets almost no play in the issue. Deimos’ army instead simply stops fighting when they learn he’s going to kill them all, and allow themselves to be imprisoned. Instead most of the page-space is dedicated to Telos and Deimos, neither of whom has been built well enough to merit that amount of  story. Deimos’ defeat also rings a bit hollow, as he’s simply destroyed by a single blast from Parallax. The appearances by theNew 52 characters also feel rushed, and don’t work nearly as well as they did last issue. None of the current universe characters sounded at all in character, and the major use of the Oracle character felt forced and awkward. The pages dedicated to the main New 52 characters would have been better spent with the New 52 Earth 2  characters. Even though they’ve served as the main protagonists of the mini-series, they were almost completely ignored in this issue. 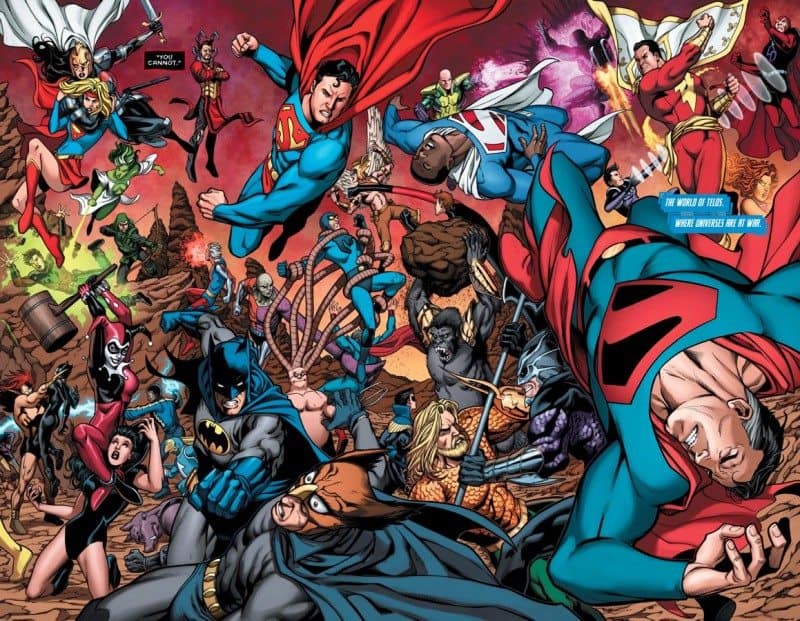 Artistically, the issue continues the downward trend that’s been happening since the series artistic Andy Kubert pencilled highpoint in issue five. Penciller Aaron Lopresti is serviceable for a majority of the issue, but no more than that, with his best scene being the previously mentioned double-page battle spread. Most of his characters have a sameness to them that can sometime makes them hard to distinguish, especially in large crowd scenes. One of the major problems with earlier issues also reappears here, namely issues with changing costumes and character designs within the same shot. For example, the Donna Troy seen joining up with the JSA last issue was the Pre-Flashpoint version, yet the Donna seen in this issue seems to be wearing her pre-Crisis on Infinite Earths Wonder Girl costume. Structurally, I should note that the issue features the same all-story/ads at the end page sequence that the last issue did.

Convergence #7 is another mediocre issue from what’s been a mediocre event. While it doesn’t hit the lows of the early issues, it also doesn’t hit the (comparative) heights of the series’ middle issues.

The Seventh Week of the Convergence event capped off the Crisis on Infinite Earth set mini-series. The list of titles included:

Convergence: The Adventures of Superman #2 by Marv Wolfman and Roberto Viacava

Convergence: Batman and The Outsiders #2 by Mark Andreyko and Carlos D’anda

Convergence: The Flash #2 by Dan Abnett and Federico Dallocchio

Convergence: Justice League of America #2 by Fabian Nicieza and Chriscross

Convergence: Superboy and The Legion of Super-Heroes #2 by Stuart Moore and Gus Storms

Next week brings the end of the Convergence event, with the series final issue. While the series has been mediocre on the whole, next week’s promise of a “shocking conclusion” means the series could bring us a surprise yet. Perhaps DC will find a way to tie it into their June relaunch after all. The week also caps off the final set of companion series, ending the ten tales set during the pre-Crisis on Infinite Earths period.