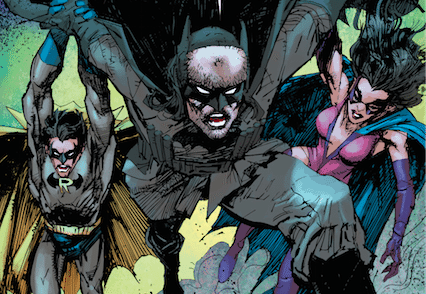 The first glimpse of Mark Millar’s Superman: Red Son convergence with DC’s er, um… Convergence packs quite the punch. Orwellian themes abound while enough sufficient action is dished out as the many attacks of Dick Grayson and Huntress fall on numb, cold Steel. The Russian man of Steel that we love to hate is back and this time he’s got a pair of inter-dimensional travelers in his net. Luckily, an obscure vigilante that I’m sure you never heard of arrives to save his Ward and Daughter. 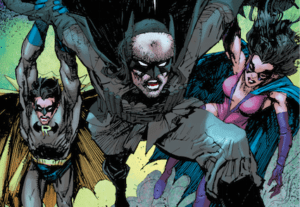 The first issue did a bang up job re-introducing us to Millar’s world without stepping on its toes. The creators are confident enough to recognize that the best perspective for a sequel is always the fresh perspective. Rather than return to Superman’s sharp-left political views, the creators opt for a closer glimpse at the resistance movement ala Batman. Here we see a displaced Orphan plot against the Red Machine the same way Miller’s The Dark Knight Returns explored an underground surge against Ronald Reagan. It’s refreshing to see a Dark Knight omitted to his ideals despite the lack of funds. While it raises a few logistical questions, an impoverished Batman reminds us exactly why we love this character: In a world of supermen who could kill thousands in the blink of an eye, there will always remain the one man with no superpowers to watch over the weak.

After the daring rescue from Batman, the trio finds salvage in the best hideout that a non-capitalist Bruce Wayne can afford. It’s here that the two parallel universe visitors begin to trade stories. By the end of their character building session, Batman hands Grayson a small box warning not to open it until the time is right. Grayson vows to guard this McGuffin box with his life. Soon after, the Russian Superman catches the two, but Grayson opens the box to reveal… Kryptonite! With that, the Russian Superman becomes as dangerous and intimidating as Yakov Smirnoff. 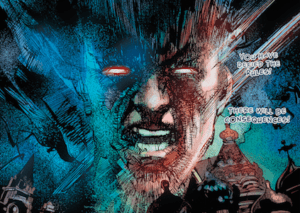 Rather than kill a man who has killed countless, Dick Grayson’s inherited one rule ends up sparing Red Superman’s life, angering Huntress to no end. While I can understand Grayson’s unwillingness to take a life, throwing the kryptonite away seems pretty irresponsible. There has to be some middle ground between killing Superman and leaving him invincible. Thankfully, Superman is impressed enough with Grayson’s honor to spare his life in exchange. This peaceful resolution isn’t satisfying enough for Mother Russia, so the three are branded as fugitives. This turns out to be no big deal for Grayson and Huntress, as the two are catapulted back to their world.

For the most part, this tale is a serviceable action romp that gets a huge assist from the ambitious artwork in the action scenes. The story follows such a predictable path that Grayson and Huntress are unable to break free from one-note emotions.  Grayson is always brooding while Huntress is always manically looking for a fight.  This makes Grayson’s ending decision to finally put on the Batsuit ring a bit hollow. The mind of Grayson wasn’t sufficiently explored in this issue to justify such a huge development. What this comic gets right most is the Batman. Mark Millar set the groundwork for the freedom fighter, but this provides regular universe members for him to interact with. Seeing a penniless vigilante fight for what he believes in solidifies that it is the spirit, not the wealth that makes the Dark Knight who he is. 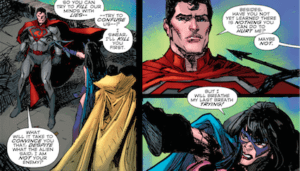 I imagine Grayson and Huntress haven’t seen the last of the Superhero Soviet Empire. There are adventures to be had in this storyline. Personally, I’m pulling for Batman to help the Red October to defect to Alec Baldwin. Imagine the Dark Knight teaming with Sean Connery to evade the Man of Society Steel underwater. A man can dream.