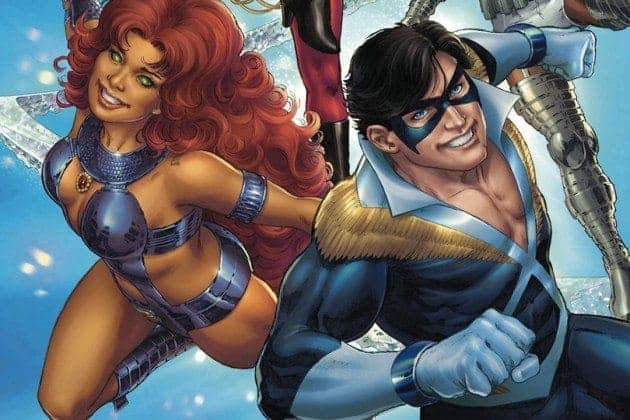 Set in the domed-in pre-Crisis Gotham City, Convergence: Teen Titans takes us to a group of heroes who we care deeply about!

Convergence: New Teen Titans #1 is set in the domed-in version of Pre-Crisis Gotham City, and begins with  Wonder Girl/Donna Troy recording a message for her husband Terry Long, who was presumably home in New York while the Titans were in Gotham during it’s abduction. Donna laments that the time under the dome has been hard on the Titans, with the group of seven splitting off into three pairs and leaving her alone. First Donna is contacted by Nightwing/Dick Grayson and Starfire/Korianda’r whose romantic relationship seems to be cracking under the pressure, even though they got married under the dome. The two are chasing down murderous burglars, a jetpack with lasers substituting for Princess Koriand’r’s lost powers, when they begin arguing over Kory’s desire to kill them. Meanwhile, Cyborg/Vic Stone and Changeling/Gar Logan (aka Beast Boy) are working to keep Gotham’s power supply running, even though Gar expresses worry to Donna that Cyborg’s body is failing him since he doesn’t have access to necessary replacement parts and upkeep. Finally, Kole begins lamenting to Donna that Jericho/Joseph Wilson is being cold and distant to her, even though she clearly has romantic feelings for him. 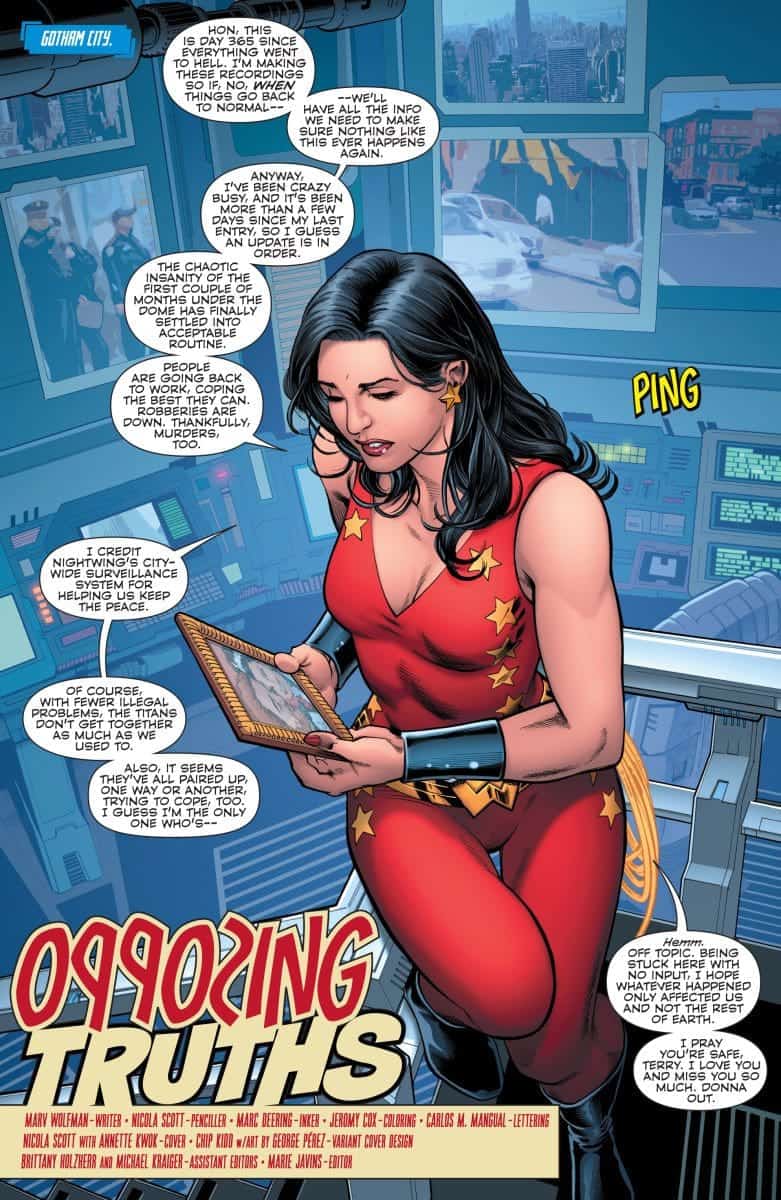 However, the Titans personal problems are quickly put on hold when the dome falls, they hear Telos’ message of combat, and they’re attacked by the Doom Patrol of the Tangent universe. The two teams battle, however neither of them seem to have their heart in it. After the fight, the Doom Patrol members theorize that they could use Cyborg’s remaining powers cells to transport themselves back home, and vow to do so even if it destroys Gotham and the Titans. Meanwhile, the Titans are attempting to figure out how to approach the situation. Nightwing appears to be snapping under the pressure, and after being confronted to Donna, confesses that he’s unsure if marrying Kory was the right thing to do, as he fears they’re too different even though they love each other. She responds by telling him she’d do anything to be with the person she loved instead of being separated by the dome. Dick is thrown for a loop by this, and goes off to be alone. He’s then contacted by Tangent Doom Patrol member Lourdes, who tells him that the two of them need to talk, ending the issue.

I have to preface this part of the review by saying that Convergence: New Teen Titans was, by far, the Convergence tie-in I was most looking forward to. Marv Wolfman 1980’s NTT run is my favorite of all time, so anytime he returns to something Titans related it raises my expectations incredibly, probably unreasonably high.That said, this issue met those expectations and in most ways surpassed them.

While Wolfman hadn’t written anything NTT-related since the release of the oft-delayed Games graphic novel in 2011, and hadn’t written any completely new and original material using most of the team since 1996, it’s obvious from the first page of the issue that he still has a firm grasp on the characters. Whether it be having Donna push aside her own pain to play group therapist, Kory and Dick arguing over her desire fight uninhibited, or Gar and Vic’s banter covering the deep fraternal bond the two share, all the character bits felt right. Not only that, they matched up perfectly to where the characters were emotionally in 1985, something another writer wouldn’t have been able to manage so adeptly. (Sidenote: It surprises me that DC didn’t bring back more era-correct creators to work on these Convergence tie-ins, as it would have helped make the books feel more authentic. It’s not that they didn’t have options either. For example Ron Marz, creator of Kyle Rayner and longtime writer of his adventures in Green Lantern wrote two Convergence tie-ins, but neither was the Green Lantern/Parallax book that heavily featured his creations.) Wolfman also kept the plot close to the format of his Titans run, with the personal interactions and character relationships being the main thrust of the story. The only slight negative aspect of the story is that it doesn’t include Raven, however that’s only because she was absent from the team at the Pre-Crisis point when Gotham was domed. 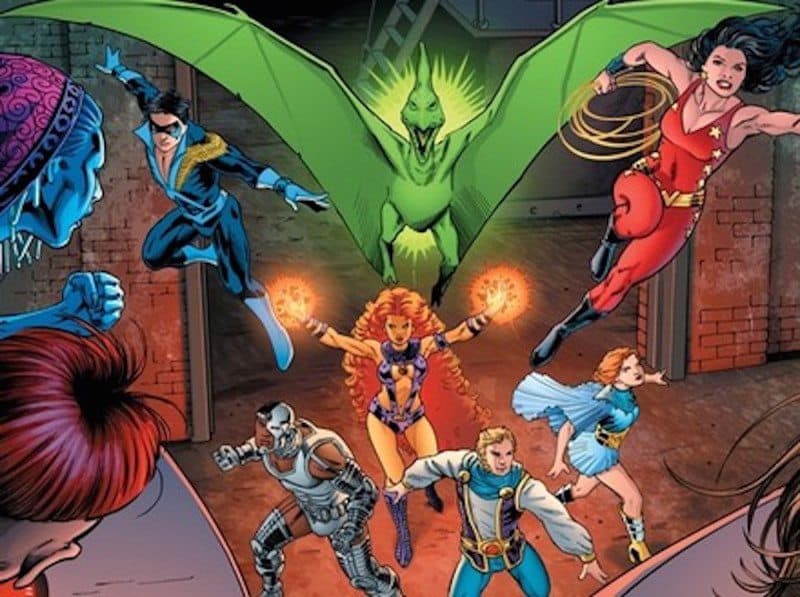 While no artist has ever matched the work of co-creator George Perez when it comes to The New Teen Titans, Nicola Scott does as spectacular job as anyone else ever has on the characters. Her characters and backgrounds are smooth and consistent, something that’s been sorely lacking from many of the Convergence books, including the main series itself. Also, while the Titans do look like her traditional work, she adds numerous flourishes such as poses and panel layouts that are very Perez-ian, and greatly add to the authentic New Teen Titans feel of the book.