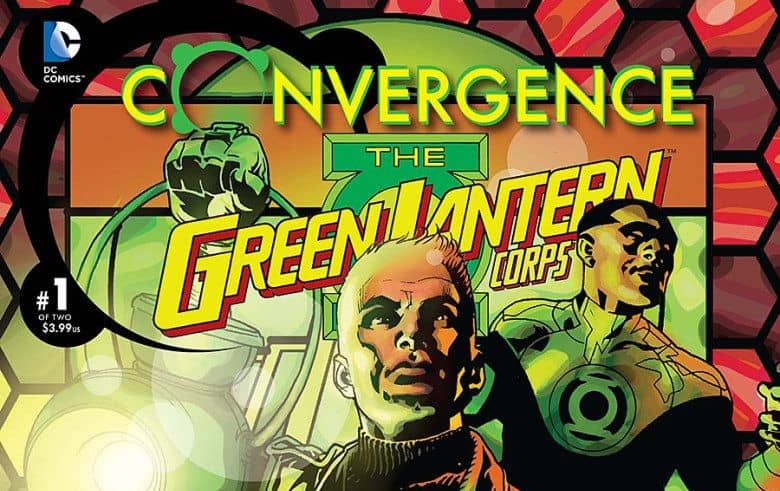 Kicking off to a strange start, Convergence: Green Lantern Corps #1 opens with the modern-day Guy Gardner – as he gets a nasty shock!

David Gallaher and Steve Ellis kick off with Guy, a character who has come to define the words ‘rash’ and ‘obnoxious’, calmly teaching gym to a group of schoolkids who are roleplaying as the Justice League.  Calmly, that is – until one of the kids starts pretending to be Sinestro, which gives Guy a panic attack. 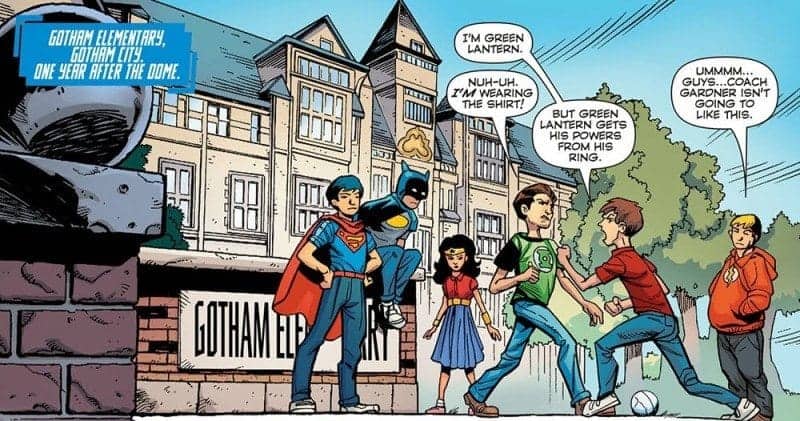 The issue then transitions to Guy in therapy discussing his issues, giving some expository dialogue in the process. Guy had woken up from a coma roughly a year before (just as the dome fell); the issue began after having been hit with an an explosion meant for Hal Jordan, and left for dead while serving in his role as Earth’s alternate Green Lantern. He eventually ended up in the Phantom Zone, where he was tortured by Zod and later Sinestro before being freed. He initially seems upset about his dome-de-powered Lantern ring, but quickly transitions to a tirade on Jordan. Guy leaves the office in a huff, and we learn that Hal has been keeping tabs on his therapy, blaming himself for Guy’s mental state.

Gardner’s anger at Jordan continues after he leaves his therapist’s office, and he becomes dead-set on a fight. He initially confront’s Jordan’s fiancé Carol Ferris, but she reveals he broke off their engagement and disappeared. He moves on to John Stewart, and eventually gets him to reveal Hal’s location. He finds Jordan attempting to re-power his ring and contact the Guardians at an abandoned garage, and the two argue and eventually get into a physical scuffle.

The fight comes to a halt when Telos’ (now obscenely familiar) announcement occurs and the dome falls. Hal quickly recharges his ring but doesn’t allow Guy his, saying that he doesn’t want to put Guy’s life in danger again. Hal, now fully powered as Green Lantern, leaves. Guy however will not be denied. He gathers together a costume from implements left in the garage, including a leather jacket (very similar to his early 90’s Warrior look) and a baseball bat. The issue ends with Guy riding off on a motorcycle, vowing that it’s finally “party time.” 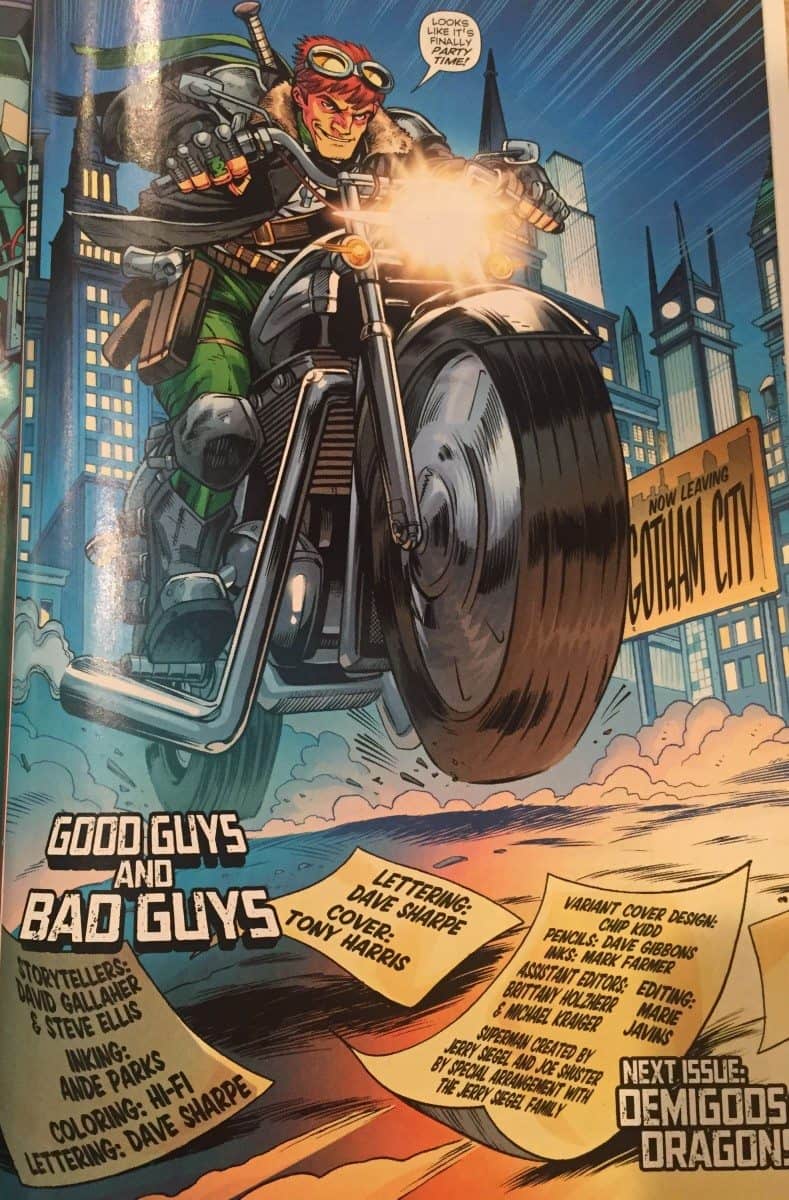 Convergence: Green Lantern Corps #1 is a very different Convergence tie-in. It doesn’t fall into the repetitive cycle of “de-powered hero is sad, dome falls, re-powered hero goes off to his assigned battle” that most of the others have. Instead Gallaher and Ellis do something that very few of the other Convergence books have done and use the time period the title is set in to full effect. While most of them have been content to write the character as their generally accepted status quo, perhaps with a time period specific costume, the GLC creative team use the opportunity to strip Guy Gardner to his core.

In normal Pre-New 52 DC continuity, the character was injured in space and ended up first in the phantom zone, then in a coma, before being awoken by a faction of Guardians of The Universe during the Crisis on Infinite Earths and awarded a new Green Lantern ring. After this, Gardner’s character is written as an arrogant and macho alpha-male, with the sudden change in his character attributed to his brain damage. Since the dome falls prior the Crisis, Gallaher has the clean-slate of post-coma Gardner to work with. Instead of having Guy simply switch personalities abruptly and blaming on brain damage, he deftly shows that the character has been slowly cracking under the stress of waking from his coma and remembering the torture he went through. As a coping mechanism, he begins focusing his anger at the situation at Hal Jordan, seeing Hal as having everything Guy desired yet deserving none of it. At the book’s climax, Guy allows his anger to fully boil over into a physical confrontation with Hal, only to be stopped from taking back his power. This slow deterioration of Guy’s mental state not only makes for a great story, but it makes his turn to bat-wielding vigilante at the end of the book completely believable. 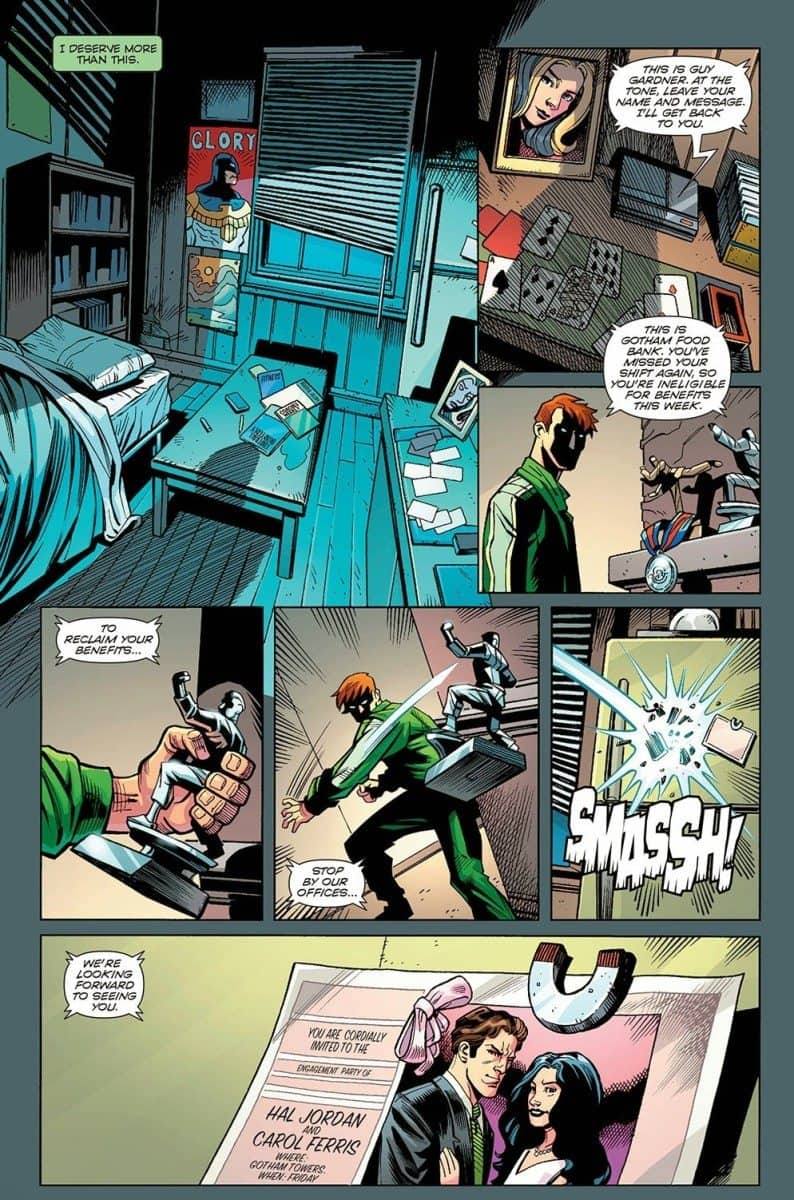 While Gardner’s mental break is the driving force behind the story, Gallaher packs several other great character moments into the book. His Hal Jordan is an on-point representation of the character, and it’s perfectly reasonable to assume that military man Hal would break off his engagement to Carol to devote himself to reactivating his ring once the dome fell. John Stewart and Carol Ferris don’t get as much page time, but both are also well served in the story. The former is working as architect developing agricultural growth centers under the dome, while the latter is going through the motions after Hal broke off their engagement. Also of note is the opening three pages featuring school kids playing Justice League, as it’s packed with in-jokes for longtime fans of the characters.

The artwork for the book is the best of any of the Convergence books I’ve read so far. Steve Ellis, with Ande Parks on inks, brings a clean well-defined look to the characters, especially Guy Gardner, whose slow mental breakdown subtly shows on his face throughout. The artistic highlight of the book is the design of guy’s final costume. While a leather jacket/baseball bat/goggles combination could have looked like parody in the hands of a lesser artist, Ellis is able to make it look, for lack of a better term, badass.

I wasn’t expecting to be a big fan of Convergence: Green Lantern #1, as I’m not a big fan of either the 80’s era of the title or Guy Gardner the character. However Gallaher and Ellis’s inventive take and tightly constructed issue not only hooked me, it became my pick for best Convergence issue so far, and left me greatly anticipating Issue 2. While that book won’t be out until next month, we here at ComicsVerse have a little extra something…