Available on all mobile devices, MARVEL CONTEST OF CHAMPIONS pits you and your team of Champions against the villains of the Marvel Universe. It’s a white-knuckle battle of epic proportions, which involves full out brawls and quests as an exciting story line opens up before you.

Having spoken to the developers at New York Comic Con 2015 (keep your eyes peeled for the interview), it’s clear they have made a game that not only appeals to the masses, but to the Marvel fans, with great character designs, and epic signature moves. Recently they announced a new exciting update, featuring residents of Hell’s Kitchen.

Here’s what they had to say!

In celebration of the…debut of the Netflix original series, MARVEL’S JESSICA JONES, the MARVEL CONTEST OF CHAMPIONS mobile game has unlocked a special in-game quest, where players will be introduced to Jessica Jones as they search for Daredevil. A new variant of “The Man Without Fear” joins the game’s stellar roster of more than 60 Super Heroes and Super Villains donning the red suit inspired by MARVEL’S DAREDEVIL. 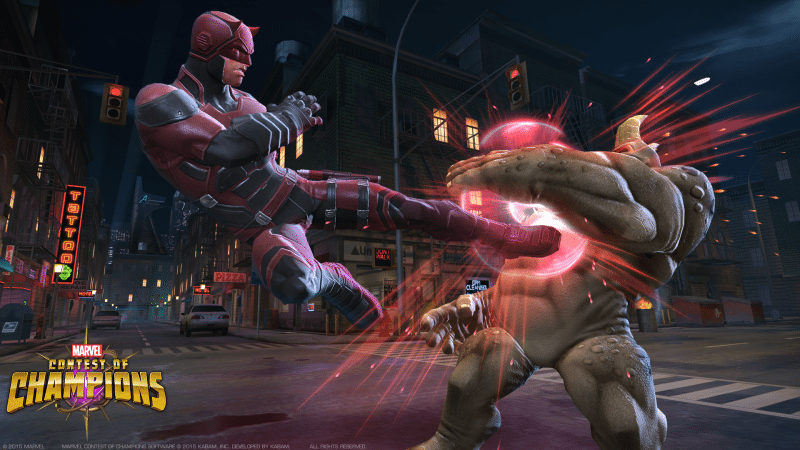 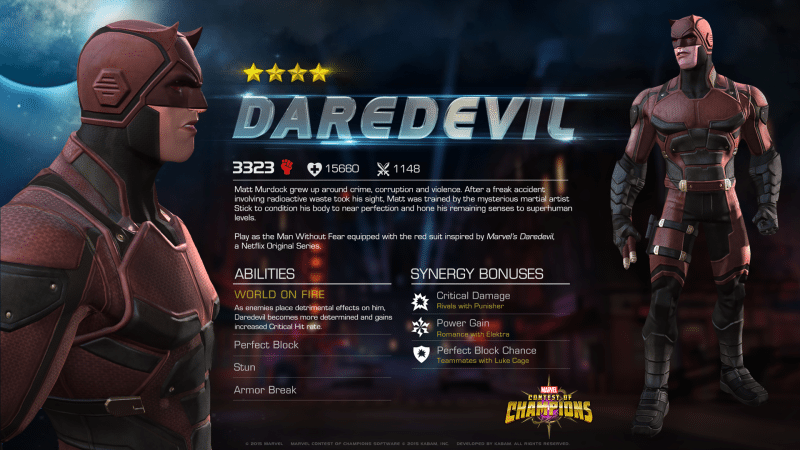 WATCH: You can view the MARVEL CONTEST OF CHAMPIONS commercial here!

MARVEL CONTEST OF CHAMPIONS is the only arcade-style fighting mobile game that dives deep into the Marvel Universe. Heroes and villains from Marvel’s Avengers, Defenders, X-Men, Inhumans, Guardians of the Galaxy and more battle it out in iconic Marvel locations, in an epic storyline that stays true to classic Marvel storytelling.

All episodes of MARVEL’S JESSICA JONES will be available on November 20, only on Netflix.

Exciting and addictive adventure ahead! The Daredevil design looks like it leaps out of the TV series. The detail is impeccable and the graphics are outstanding. But not only has Jessica Jones made an appearance, but Luke Cage has become an unlockable playable character in the game! This is one contest I will be playing late into the night. Prepare to get sore thumbs!