Some elements of the All-New All-Different Marvel Universe took fans by surprise when they were announced – and CONTEST OF CHAMPIONS was one of them.  Does the first issue show promise?

Based on the popular CONTEST OF CHAMPIONS mobile game, this comic stars the original superhero Outlaw, quickly established as the retired ‘British Punisher’.  He’s brought out of retirement and into the Contest of Champions, where he has the misfortune of being part of a kill-team of three on three – himself, Iron Man and Gamora, against Venom, Joe Fixit (the Grey Hulk), and a version of Moon-Boy and Devil Dinosaur!  It’s a fun scrap, and sets up many of the plot elements. 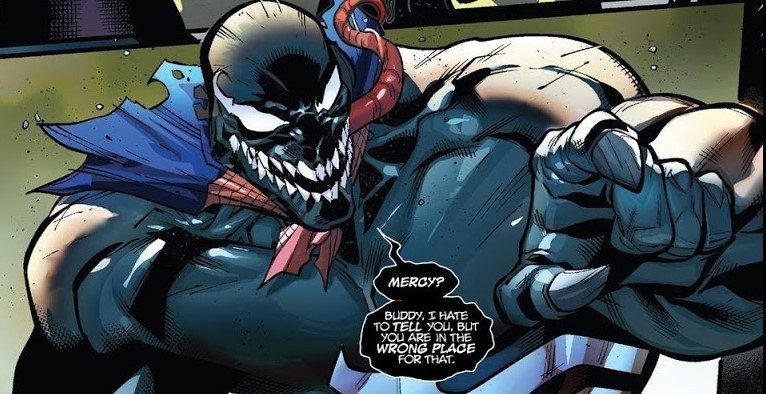 The issue also features two side-stories; over in Korea we meet the White Fox, who learns of the death of one of her fellow Korean superheroes, Gun-R.  Gun-R’s death is clearly established as being tied to the Contest, and she resolves to investigate.  The second story introduces us to the character of Guillotine, clearly inspired by the Black Knight, but given some fascinating twists.

READ: Our review of ALL-NEW ALL-DIFFERENT POINT ONE, which introduced this book!

Let’s face it, Al Ewing’s scripts have guts.  With all of the Marvel Universe to pick from, and with the latest incarnation of Iron Man on the team, anyone else would have chosen to focus in on some characters that fans already know and love.  Instead, Ewing dares to put two original characters at centre-stage, with a third starring role for someone few Americans have encountered before.  What’s more, I love the way he does it; he establishes that all these characters have a rich history, but have simply been lower-tier heroes, ones we’ve never seen before, or else have been geographically distant from the comics we know and love.  It’s a smart move that adds real depth to the Marvel Universe.

It does mean that the book stands or falls by the quality of these three characters, however.  So how do they fare?

Outlaw is a fascinating hero, with real depth.  Picking up on a concept from Nathan Edmondson’s latest PUNISHER run, Outlaw clearly took inspiration from the Punisher back when he lost his family.  As the years have passed, though, Outlaw has mellowed out, and left his superhero days (and his guns) behind him.  The idea of this retired hero living in Acomb in North Yorkshire is great; coming from Yorkshire myself, I love the idea that there could be retired superheroes living amongst the everyday, and it just spreads the Marvel magic.  “The world outside your window” indeed. 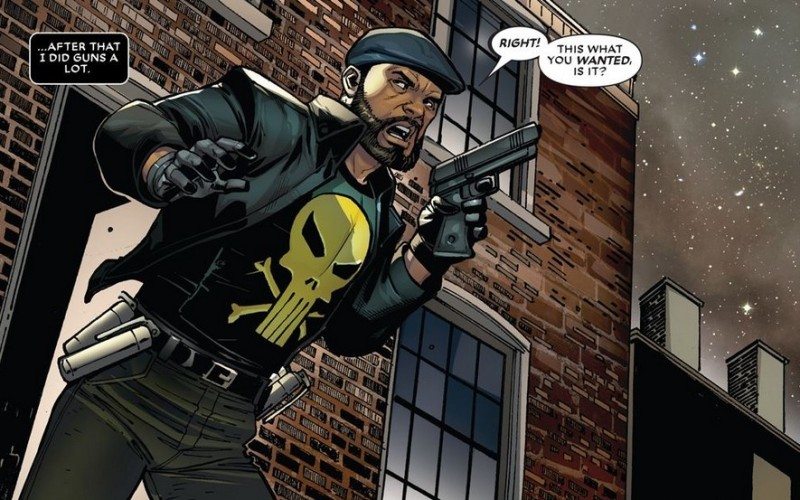 Guillotine is fascinating, a French hero who has inherited a cursed blade.  Ewing spins her origin tale all the way back to 1793, and weaves Guillotine’s bloodline into events in French history – it’s meticulously researched, carefully inserting Guillotine into Parisian history in just the way Marvel have previously woven the likes of S.H.I.E.L.D. and the Stark family into American history.  With such a rich history, understandably the actual character of Guillotine doesn’t get so much time to shine; but she’s still fascinating, leaving me intrigued in seeing more of her and of her world. 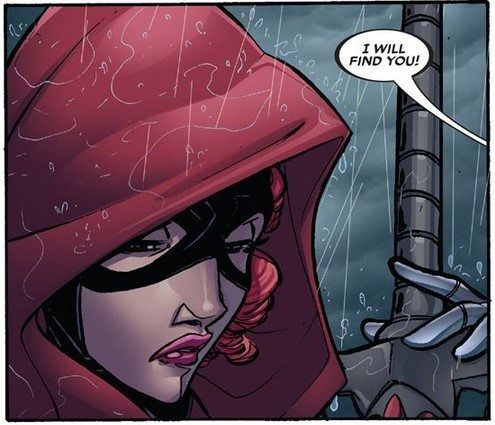 Finally there’s White Fox, who – oddly enough – doesn’t get the same level of treatment.  Whereas Guillotine is a vigilante, and Outlaw is a retired, well, outlaw, White Fox is treated by the narrative as though she’s a big deal.  She’s an established superhero, her country’s equivalent of Captain America, and she’s not happy to learn of a friend’s death.  Perhaps wisely, Ewing avoids giving us too much information; having introduced two new superheroes in detail, he leaves White Fox’s backstory and powers mysterious.  It’s an intriguing choice, since she’s a character Marvel have been hoping to introduce into American comics for a long, long time.

READ: Who is the WHITE FOX?

The inclusion of White Fox is what really makes this book a stand-out.  Hoping to market comics in Korea, last year Marvel announced their intention to introduce the popular Korean superhero from the AVENGERS: ELECTRIC RAIN comic.  The fact that she’s not the only international superhero here, and that the book is written by the British Al Ewing, makes me strongly suspect that this book is partly aimed at international audiences.

It’s a good book, with Ewing and his artistic team – Paco Medina on Pencils, Juan Vlasco on Inks, David Curiel on Colors – all showing the quality of their work.  The different geographical locations are beautifully illustrated, with several standout moments; Outlaw’s leaping out, gun in hand; Gamora’s two attacks; and White Fox’s vow, itself rendered as a homage to AVENGERS: ELECTRIC RAIN. 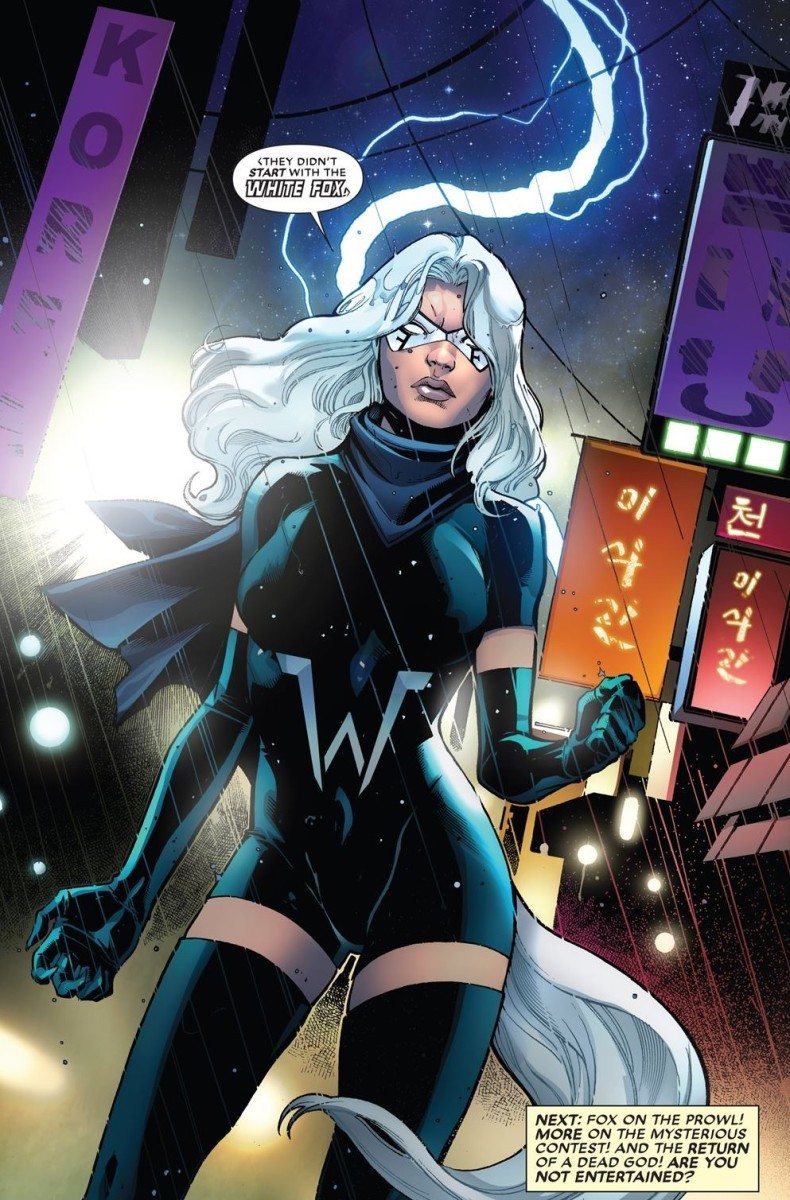 Can a comic inspired by a mobile game really work in today’s market?  I’m not sure; but, with ALL-NEW ALL-DIFFERENT MARVEL POINT ONE tying in to this so strongly, and with a possible focus on the international market, I think this may be the best chance a book will get.  I’m definitely going to be along for the ride, and I wish the whole team the very best of luck!