[spoiler title=’SPOILER WARNING for ROGUE ONE: A STAR WARS STORY’ style=’default’ collapse_link=’false’]This article is a review of ROGUE ONE and will have spoilers. Continue at your own risk.[/spoiler] 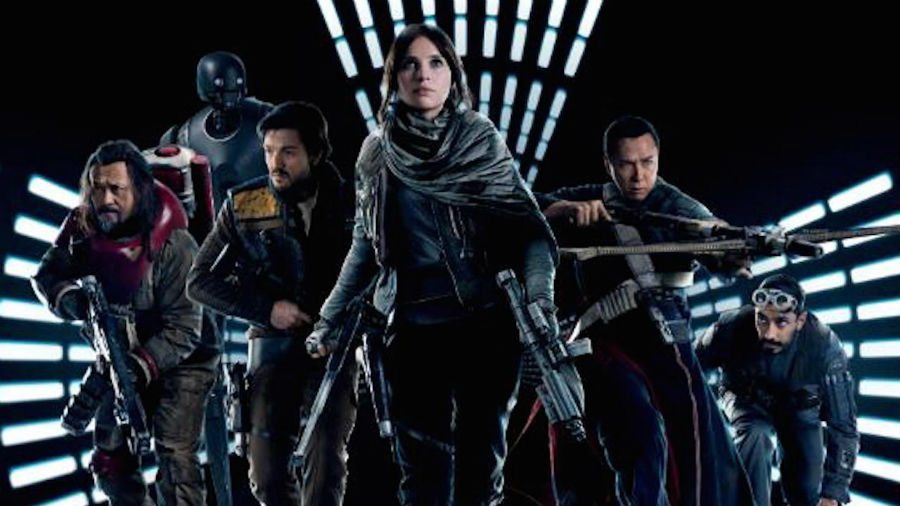 I’m giving you time to back out now, because as soon as these pictures end, the spoilers are going to start. 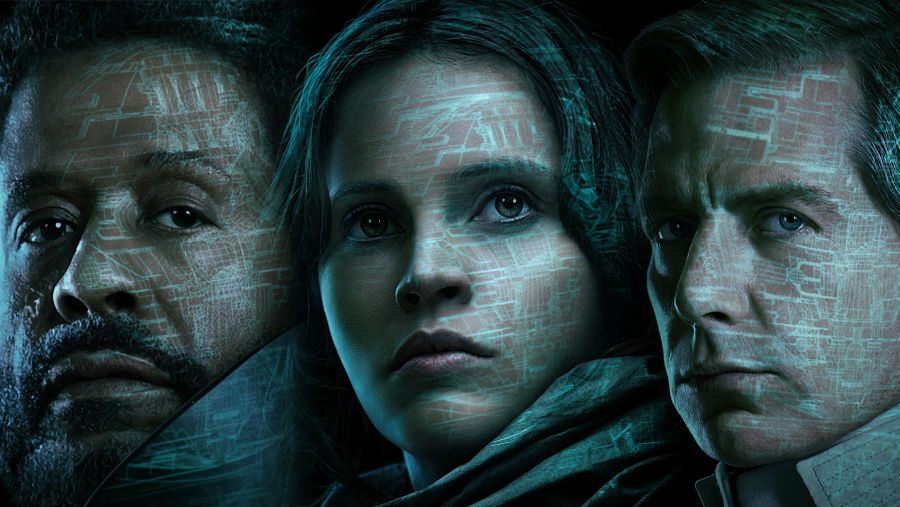 Keep going only if you want to read spoilers. 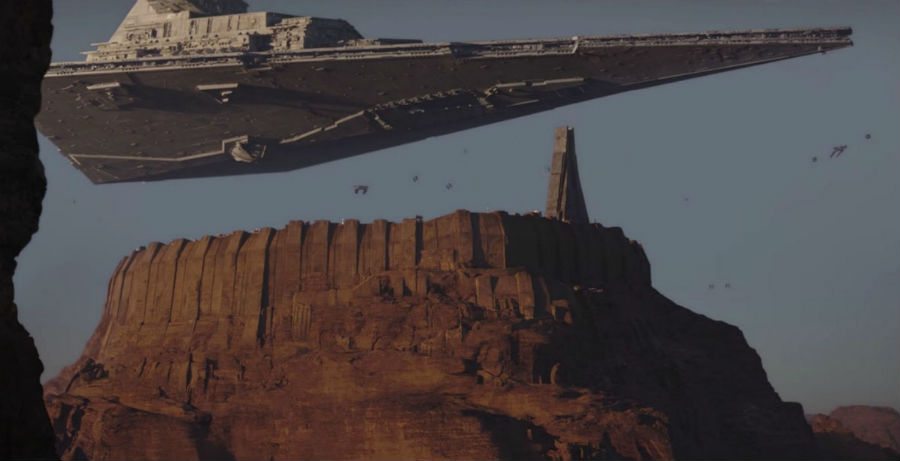 Literally, every single character from that first picture dies. But you would have already known that since you saw the movie!

Now that we have that out of the way, we can actually discuss ROGUE ONE. When discussing and rating the Star Wars films, there is a usual pattern that emerges. People laud the original trilogy and detest the prequels. Fair enough. I don’t think there is a person alive who thinks ATTACK OF THE CLONES was a good film, but hey everyone has their own opinions. And yes, THE FORCE AWAKENS has also become a part of the conversation. However, for the sake of the review, we’re not going to go down that path. So, unless you and your friends think that for some reason RETURN OF THE JEDI is on par with A NEW HOPE or THE EMPIRE STRIKES BACK, you’re stuck arguing over which of those two films is the best one. I’ve heard arguments for both sides and generally found myself thinking that Empire was the clear winner. However, after viewing ROGUE ONE, there is no doubt in my mind; it is the best Star Wars film yet.

READ: Want To Know How We Would Fix The Prequels? Click Here!

The way that the Rebellion is depicted in this film is really shocking. In the original trilogy, the Rebellion was this kind of do no evil, stand up for what is right, almost pure of heart organization. That is not the case with ROGUE ONE. In this film, the Rebellion is shown to be a much more realistic sort of resistance, resorting to tactics and schemes that one would equate to a modern-day guerrilla warfare. Ambushes, infiltrations, off the record assassinations, these are things that no one thought the Rebellion would have done in the original trilogy. They used Ewok’s for christ’s sake! There was one quote from Cassian Andor that really stuck with me for the entirety of the film “We have all done terrible things in the name of the Rebellion.” It seems to me as though that was the motto of this film, and ROGUE ONE did an amazing job depicting it as such. Another great way ROGUE ONE seemed to humanize the Rebellion was that it seemed to draw from both modern day and historical examples of warfare to depict its operations. Much like the current state of the Middle East, there are different factions of resistance against the Empire, with various levels of extremism and they are not on good terms with each other either. Much like the colonial leaders of the U.S.A, there is massive infighting within the Rebellion itself, with certain leaders calling for a disbandment of the Rebellion because they think there is now way to victory. Hell, the initial force that attacked Scarif was disobeying orders from the Rebellion, even fracturing it further! Thankfully, unlike the Rebellion in ROGUE ONE, it didn’t take a Trojan horse sort of maneuver to convince the rest of the colonials to fight. This sort normalizing of the Rebellion; taking it off its high horse and showing you the nitty-gritty of what it takes to actually run a military campaign; the moral hardships and contradictions that come with war really is, what made this film special and unlike any Star Wars film yet.

Continuing with the theme of confliction, another reason this film was just so good was the way it depicted Darth Vader. Because of the Star Wars films produced so far, we only really focus on the confliction of Vader’s mental state. How he was “lost” to the dark side of the force, and how his love for his son was the reason for him to return to the light and fulfill his prophecy as being the one who brings balance to the force. With ROGUE ONE, we get a glimpse of the duality of his physical being and we get more of a sense of why he is known as the fearsome warrior that he is. Look no further than his first scene. When the audience gets their first glimpse of Vader, he is in a vulnerable, almost infant like state. He is submerged in a Bacta Tank, on a harsh unforgiving, lava covered planet, relying on nothing but medical droids to make sure he lives. There has to be something that can be said about Vader healing himself on a planet where the conditions are identical to Mustafar, where he suffered his greatest defeat at the hands of Obi-Wan Kenobi, but I don’t know what it is. Anyway, so you have Vader depicted in such a way that he really hasn’t been shown before; physically weak, vulnerable and able to be killed at any moment. Contrast that to the last scene of the film that he is in. You hear his trademark breathing from a darkened corner of the hallway, only to be lit up from his red lightsaber. The camera goes back to the rebels, and they don’t know what they are looking at they are so terrified. Then he starts his advance up the hallway, slaughtering everyone who stands in his way and using any means necessary to get to the rebel with the Death Star schematics. The two scenes really couldn’t be more different and they show a man who lives in a world of contradiction and instability, both mentally and physically.

Finally, this is just a very well crafted film! None of the complaints that came with previous Star Wars films are prevalent here. It didn’t overuse CGI (in fact I thought CGI Grand Moff Tarkin was fantastic), the script was great; the characters dialogue actually sounded like how you would expect real people to talk in those situations, and didn’t make you cringe at all like some lines from the prequels did, e.g “From my point of view the Jedi are evil”. One of the strongest examples of how strong the script was was the fact that it has characters mention Vader at length. This constant discussion of him only added to the suspense and anticipation of seeing the character later, and once the audience does see him, he lives up to that hype. The characters were commendable, (K2 was definitely the breakout star of the film, the exact opposite of C-3PO in every way) and surprisingly, so were the cameos. It seems to me that within the Star Wars universe, cameos have always been presented in a nostalgic “look at them!” sort of way. THE FORCE AWAKENS was chock full of these sorts of introductions and overdid it to the point where the entire film kind of felt like a giant reunion tour. Looking on back at it, Han Solo’s line “Chewy, we’re home.” really could have been the slogan for the entire film. This is not so with ROGUE ONE. The cameos were brief, they were not over sentimental and the story quickly moves on, not sacrificing the integrity of the film for the sake of a feel good moment. While people might have that feeling of redundancy towards the C-3PO and R2D2 cameo, I enjoyed it. It kept those two as the only two characters to appear in every Star Wars film, and most importantly, it kept the C-3PO annoyance factor down to zero.

I cannot rate this film lower than a five out of five stars. I really can’t. Simply put, this was the greatest Star Wars film ever made. Everything about this film was amazing. The concept, the score, the final battle as well as everything mentioned above, were nearly flawless. I guess if I really had to critique anything, it would be that the voice of Darth Vader didn’t sound exactly right in one of the scenes, but that is such a small problem that it’s really nothing to complain about. I thought that getting an explanation of why there was a small weakness in the Death Star was great, not to mention how utterly sad and again, humanizing the reason for it being there was. I thought the fact that the film emphasized over and over again during the final battle on Scarif that what the main characters were doing was essentially a suicide mission; only for them to actually die one by one was very un-Star Wars like, and quite refreshing. It was a perfect ending for the main characters, as this film’s whole theme seemed to be the realities of war. Something this film did flawlessly and no one Star Wars film had explored before.