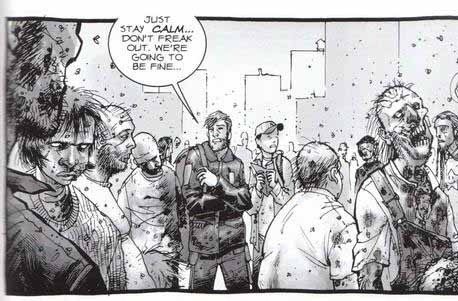 Kirkman called Marvel a “poorly run company that is partially destroying the comic book industry.” He also called Marvel’s upper management “extremely short-sighted” and causing negative effects throughout the industry, and stated that he would rather focus on “long game” storytelling instead.

If you’d like to check our the full article, here is the link:

I see Kirkman’s point as kind of a mixed bag. Issue #1s are obviously meant to sell books (As they should. More comics being sold means more comics being made in answer), but do they really interrupt stories so egregiously? All of those decade-long series that seem to extolled are all made up of entirely separate plots in story arcs of usually at most 5 issues. Walking Dead has been continuing for quite a long time, sure, but it’s surprising that Kirkman thinks he’s innocent of the ploy to garner attention and sales,the light in which he casts these enormous crossover events and issues #1s.

He made these statements at the same conference at which he announced that Invincible issue #111 would be another bold new direction on the series that readers won’t expect! Of course enormous crossover events aren’t any good for the stories of the individual characters, no one has pretended they have been, but it doesn’t change the fact that a decade-long run of a solid series might not be terribly great as one cohesive story. It may go on far too long without an end in sight to a defined overarching plot, and all good stories have a beginning, middle and end. To invoke someone I consider an industry legend, Brian K. Vaughan of Saga and Y: The Last Man brilliance told Wired in an interview, “That’s storytelling, with a beginning, a middle, and an end,” he says. “Something like Spider-Man, a book that never has a third act, that seems crazy.”

Both crossover event interruptions of extended series and the extended series themselves may cause their own kinds of issues in storytelling, and I believe that there is no correct answer in form for how to advance the medium of comics as a storytelling medium. If crossover events and flashy issue #1s (and let’s be honest, sometimes each of those are pretty great in their own right) are the “price” we have to pay to keep people buying comics so the publishing companies keep making comics,  I think it’s a pretty cheap cost.

I would venture it might be excessive for Kirkman to claim that Marvel or DC’s style of developing their comics into multiple universes or character arcs is detrimental to the comic industry.

With that said, the ‘multi-verse’ style is one of the reasons I, personally, have always been more invested in graphics novels or works like the Walking Dead over more serialized comics in the first place. I get the feeling that there are many others who feel this way as well.

As someone who aims to fully understand everything the characters of a story are about, and who aims to retain a full collection of said issues in a given story line, it has always been a bit daunting that in order to maintain that same investment with other franchises (such as a Marvel or DC franchise) I would have to contend with the fact that there are multiple versions of a character’s journey. These can branch off into other worlds, arcs, origins and climaxes. In my opinion, that idea can effectively limit the investment one might be willing to place in a character or story otherwise.

In the end – it’s a matter of taste. No one can attest that the following behind Marvel or DC isn’t astronomical, or that their respective characters don’t deserve multiple takes on their stories. Keeping a character’s history fresh over a span of 20 years is an unfathomable challenge in and of itself, and I’ve personally seen multiple iterations of some of my favorite heroes that I’ve enjoyed equally.

Furthermore – Kirkman is, to at least some degree, a pot calling the kettle black. The Walking Dead is itself currently blooming throughout varying iterations. Granted, there is but ONE comic/graphic novel based throughline – but is the television show not a slightly different storyline from the comic from whence it came? We also have separate story lines emanating through the takes provided by Tell Tale Games, the television show’s respective web-isodes and even from Kirkman himself through his book series detailing the Governor’s rise to power.

Not to fence sit, but again, Kirkman’s take on the way Marvel and DC develop their franchises, I find, was a bit excessive as his own creation is currently traveling a similar route. And that’s coming from a huge Kirkman fan.