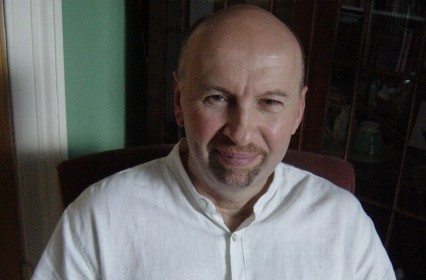 Simon Furman is the esteemed writer behind Transformers comics adaptations, Marvel’s DEATH’S HEAD, and several other titles for Marvel UK, Marvel US, and IDW. ComicsVerse’s Rod Bell AKA Villordsutch recently spoke to the writer, and the informative and entertaining chat touched on Furman’s career, approach to writing, and why writers should accept licensed material.

Rod Bell: You are coming up to the climactic 100th issue of Regeneration One, looking back across these past 99 issues do you feel that your initial idea has unfolded as you envisioned it or where there any major changes you made to the story midway through?

Simon Furman: Well, of course, it’s not just my story. Various writers have contributed to the entirety of the 100 (or so) issues that make up the original Marvel series and Regeneration One, most notably Bob Budiansky, who — as well as writing over 50 issues — devised much of the backstory for Transformers that we take as standard today. He and then Marvel editor-in-chief Jim Shooter laid the groundwork for Cybertron, the civil war, and the core characters that have underpinned everything since. I was originally focused on UK-Transformers stories that we kind of slotted in and around the monthly US Transformers stories, before taking over on issue #56, taking it through to its conclusion at #80, and picking it up again 21 years later as Regeneration One. And while I have striven to extend and conclude any story lines that ran under Bob’s tenure, a lot of this conclusion flows more out of my final 25 issues of the original series and Regeneration One itself. But is this the conclusion it would have been if we’d simply continued the numbering back in 1991? Probably not. Because Transformers itself has evolved and expanded exponentially since then. And so, while I’ve made every effort to pick up any and all loose story strands left dangling after #80 and tie them up in a neat bow, I’ve also encompassed and embraced all that extra Transformers mythos and crafted something that, I hope, binds everything together in issue #100. It really is a conclusion to the whole series, and not just the Regeneration One stretch. 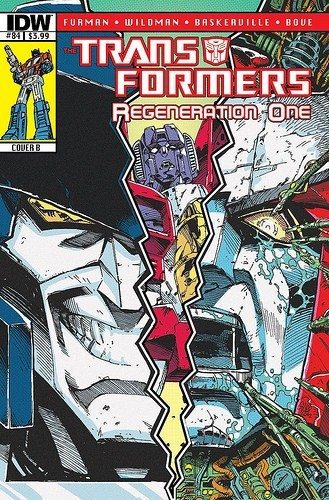 FB: Across your vast career as a comic book writer what would you say is the most noticeable change in your writing style? An example I could give is when I was 18 it was listening to Slayer and reading Death’s Head comic or nothing; at 38 I’m listening to Creedence Clearwater Revival and Slayer whilst cradling my old Death’s Head comics with white gloves and reading Regeneration One on my Nexus 7 (I’ve changed).

SF: I suppose like a lot of writers these days, I think more in ‘story arcs’ than I ever used to. Regeneration One, while building across its whole run, has four pretty distinct arcs (which, yes, fit into four distinct trade paperback collections). But I still try and give each issue its own internal integrity, something that makes it more than just one of four, or five, or whatever. But my style isn’t hugely different. I still write the kind of comics I’d want to read myself. That’s always been my rule of thumb. But I’m evolving now as a writer in different directions. I’ve been doing a lot of screenwriting recently, animated TV shows, spec movie scripts, some actual movie commissions, and that way of working/writing really suits me. Most recently, (artist) Geoff Senior and I are working on a creator-owned project that we’ll launch via Kickstarter. I’m writing it as something that’s a cross between a comic and screenplay, and Geoff is drawing it as this amazingly lush full colour movie shooting board, so some single lines of description are broken down across multiple frames. It’ll be a fully web-based/downloadable project (probably with some print incentives for Kickstarter). So that feels like change/evolution/etc. 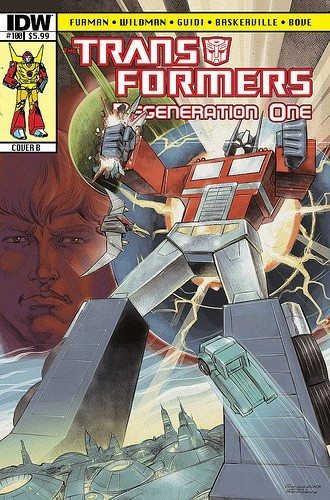 RB: Was there a particular author that made you put pen to paper and produce so many universes that we should all seek out?

RB: A bunch of questions in one here: What are the challenges to doing licensed material like Transformers? How much creative freedom are you allowed? How much of it is company vision versus yours?

SF: It’s changed, but my experience with Transformers is that Hasbro are and have been pretty good about letting the creators run with their ideas and push the boundaries of what Transformers could be. I think Bob Budiansky was often a little hamstrung by having to continually feature the next/new toy line every few issues, whereas over on Transformers UK we had more freedom to indulge ourself with more focused character-driven stories. Then when I took over on the US book, Hasbro just weren’t watching as closely as they had been, and I again had freedom to expand the saga into this cosmic thing with gods and monsters battling for the fate of entire galaxies. And even now, Regeneration One has been left to run its own distinct course, as a lot of the overseeing goes into IDW’s own Generation One comics/universe. So really I’ve had immense creative freedom within what is generally viewed as a quite restrictive environment. And I hope on the flip side of this, it’s allowed me to give back to the franchise in the shape of characters like Primus and the Fallen that otherwise may simply never have been.

RB: I still have the original run of Death’s Head Marvel UK comics (bought on release) as I found him thanks to a friend (Mr. Hatch) and his Transformers comics.  As a fan of the original Death’s Head is there ever a chance that we could return to the glory days with our favourite Freelance Peacekeeping Agent in his original incarnation? They accomplished it with the past regenerations of the Doctor (Who) in the comics so why not Death’s Head?

SF: Death’s Head is still around. He featured recently in Iron Man (thanks to Kieron Gillen) and in Marvel’s Revolutionary War. Given the time and space travelling nature of Death’s Head, there’s always a way to feature the original again. Which I’m confident will happen at some point. And, in addition to his recent Heroclix figure it’s now been announced that there’ll be a Death’s Head action figure. So there’s all sorts of gathering momentum. 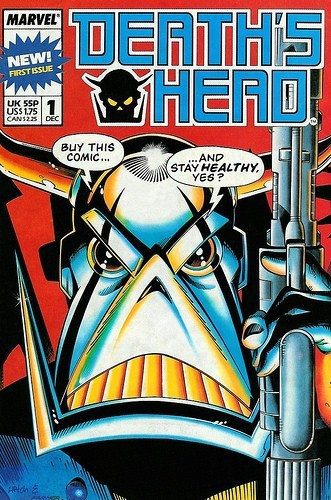 RB: As a gentleman can you comment on the Michael Bay films?  I personally found them as a travesty and nothing more than a means to sell sex and explosions to kids/young adults/adults that should know better. They ignored some amazing Transformers Lore set by yourself and other writers along with you.

SF: I think the films are what they are. I accepted early on that I am not the target audience for these movies. It’s hard to argue with the kind of box office they’ve done. But all that said, I enjoyed the first one. It had so much wow factor that I could ignore the negatives.

SF: It’s all storytelling to me. And licensed work has an inbuilt challenge. Because everyone expects it be somewhat, shall we say, bland, I feel a great impetus to do my damnedest to prove them wrong. I think (at least part of) the reason that Transformers has lasted this long is the sheer effort I and the other writers have put in over the years to confound expectations of what a licensed comic/property can be.

RB: Across your many years across comics what would you say you would say was the greatest year for comics and in your view the worst?

SF: Greatest was probably mid-80s to early 90s. There was a ton of fun and commitment about comics in that period. I was in and around the Marvel US offices at the time (lived out in NYC for a while) and it was the twilight of the old, Bullpen-style Marvel, complete with big, big characters and personalities around the editorial and creative staff. After that, it all became very corporate and marketing-driven, and a lot of that fun and spirit drained away. By 1995 I think it had reached an all-time nadir. The artificial boom had turned to bust. There were daily redundancies, bankruptcies, etc. Sales had plummeted and titles were being cancelled in droves (or, the cash-cow titles/lines milked to the point of absurdity). Things recovered after that and picked up slowly, but comics would never really be the same again.

RB: Which character/storyline in your numerous catalogues of “Stuff I’ve created” have you fought the hardest for to remain as your intellectual property?

SF: Sadly, I have little or no intellectual property in anything I’ve produced in my career. Death’s Head, which is the closest I have to a fully ‘created by’ credit, is Marvel’s. I don’t resent that, but I am trying hard now to change what the percentage of my workload that I have an actual stake in is. I have two creator-owned projects in the pipeline, the one with Geoff and another with Andrew Wildman, part of our Wildfur collaboration, and a slew of movie projects that are either scripts or ideas waiting to be developed, and looking ahead there are some other things on the horizon where I may forsake most of my upfront money for some of the back end. More risk, but the rewards are there to had if they take off.

RB: Ending as we began on the release of the 100th issue of Regeneration One what will you be doing on the day to say well done to yourself?

SF: Signing copies at Orbital Comics in London. Where I’m sure (afterwards) we’ll all raise a glass and toast RG1. Jone done!

Rod “Villordsutch” Bell is a writer and reviewer for ComicsVerse and a few other sites. You can find much more of his work here.