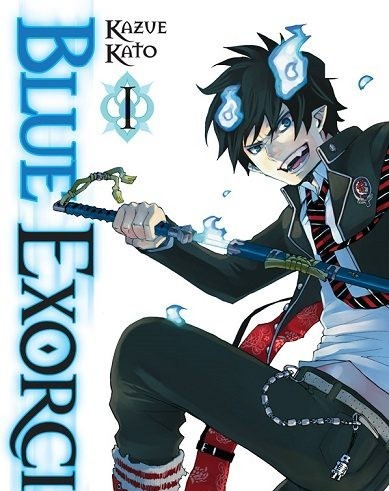 While I was unable to attend the Anime Expo this year, I was able to score an interview with AO NO EXORCIST/BLUE EXORCIST creator Kazue Kato. Because there was a language barrier, this interview was conducted over email and has been translated into English.  The interview occurred prior to the news of a Blue Exorcist season 2’s announcement, which one of my interview questions addresses, so Kato’s answer to that question may appear a bit dated. Without further ado, please enjoy this awesome interview!

ComicsVerse: What was your inspiration behind the BLUE EXORCIST series? How did you conceive it?

Kazue Kato: I saw the movie THE BROTHERS GRIMM, directed by Terry Gilliam, and had the idea that if I created a similar world, but took a more classic approach, it might appeal to young people. I experimented a lot from there.

CV:  Where did the seemingly Western religious aspects come from, like the title?

KK: The work I had serialized before BLUE EXORCIST was a space adventure manga, so I wanted to create a different kind of world. I felt like gothic horror was a pretty stark turn away from that, so I felt like it would be worth challenging.

CV: How difficult has it been for you to maintain the heavy production schedule for the manga?

KK: It’s very difficult. I ask for one month off a year, but in Japan, it’s standard for serializations to go on continuously without breaks, so they don’t take that very well. Sorry for taking off! I’m serialized in a monthly magazine and barely make it work, so I have a lot of respect for authors who do weekly serializations. They often sacrifice their health and their private lives to do it. It’s a job that only a chosen few who have the skill and the fortitude, both mental and physical, can do. I’m definitely not one of them.

CV: Did you expect the series to be as successful as it was as a manga, and then as an anime?

KK: I had no idea! At the time, I think I was pretty sure it would get canned.

CV: Do you do research prior to creating a series or an arc?

KK: When I do a new arc, a lot of times I’ll base the setting on a real-world location, so I’ll go and visit, casually taking pictures and taking in the atmosphere.

REVIEW: ComicsVerse takes a look at THE BIRTH OF KITARO!

CV: Who are your personal inspirations or heroes as a creator? Are there any other manga artists you especially admire?

KK: As far as manga artists go, when I was younger, I was really inspired by Katsuhiro Otomo (AKIRA), Yoshiyuki Sadamoto who did the character designs for NEON GENESIS EVANGELION, and Naoki Urasawa (MONSTER). Now I would say that I’m inspired by Western movies and dramas.

CV: While the manga is still ongoing, the anime series ended quite some time ago. There are rumors of the anime returning. Is there any truth to this?

KK: It’s true! We just announced it. Please give it a watch!

CV: What will be next after you finish BLUE EXORCIST ?

KK: I have a lot of ideas, such as an Edo period piece, one about anthropomorphic animals, or a cooking manga, but my top request is to adapt another work into manga form.

CV: What advice would you give to young creators or anyone looking to get in the manga industry?

KK: For now, you should try drawing a lot of manga and show it to others to get their feedback. There are lots of ways to become a manga artist now, so you should find the way that suits you best.

CV: Would that advice be different for someone who’s just a writer or just an artist?

KK: I think my advice would be the same. Of course, the actual work itself would be quite different.

CV: You’re currently entering a new arc that seems to be focusing on Shura and Yukio, can you give any insight on the upcoming arc?

KK: The arc focusing on Shura just ended with the manga taking a bit more mature of a direction, so I hope you enjoy! As far as Yukio is concerned, I’m taking some time to develop his character over a few arcs, so stay with me for a little longer.

CV:  How many more arcs do you see in the series and do you have a specific end goal?

KK: Right now, I think there might be four more arcs. I have a rough storyline complete for the ending, but I haven’t figured out all of the details. I have a few things where I’m not sure what to decide to do.

CV: What is the biggest thing you’d like to accomplish in your career?

KK: I want to do something where I’m completely satisfied with my work. That may never happen as long as I live, but I think that’s my dream right now.

I want to thank Kato for taking the time to complete this interview on her plane ride over. I’m sure her schedule was jam-packed with the expo, the season two announcement, and keeping up with the series itself, so her taking a moment to be interviewed was greatly appreciated. I hope everyone enjoyed this interview as much as I did.