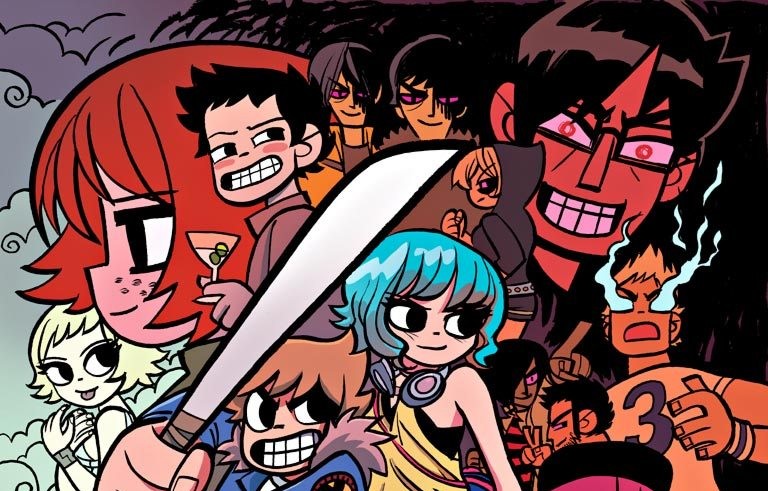 SCOTT PILGRIM’S PRECIOUS LITTLE LIFE is a graphic novel written and drawn by Bryan Lee O’Malley that was first released in August 2004, but that was not when I picked it up. I picked it up four years later when I was attending a new school. It was my first year of high school, and I was eager to make friends. I had befriended a girl on my volleyball team, I believed that friendship to be the luck of the gods at the time, and once while we were on a bus trip my friend was reading this book full of cartoons. I was so amazed and so inspired by her. She was two years older than me, was an extremely talented artist, and she loved comic books. I had received some very mixed messages as to what determined cool all of my life. Cool was being friends with guys and going to parties unchaperoned by parents. It would be ever cooler to have a party chaperoned by parents who would give you alcohol or something, but in that moment I realized that being cool meant loving something that is awesome and speaks to you on an intellectual and emotional level despite what other people say.

LISTEN: Our podcast hasn’t been around as long as SCOTT PILGRIM, but it’s still celebrating anniversaries! Here’s our 50th podcast on Alan Moore’s SWAMP-THING!

I asked her what she was reading and she explained the basic premise to me as I will explain it to you now. SCOTT PILGRIM’S PRECIOUS LITTLE LIFE and the titles that follow is the story of a 23-year-old Canadian named Scott Pilgrim who falls in love with an American girl named Ramona Flowers, and in order to date her he must defeat her seven evil exes. Of course, as with most great works like BUFFY, THE VAMPIRE SLAYER for example, the description doesn’t even begin to truly do justice to what makes this series of 6 graphic novels so fucking awesome. However, despite the impossibility that I always feel with describing my favorite comics and shows, I think I have determined a few aspects that make this one of my favorite graphic novels ever after all of these years.

I understand that if you are reading this in order to get an idea of why SCOTT PILGRIM is such a good series then you will probably be very confused by that title, so I will unpack it for you my baby birds. SCOTT PILGRIM is inspired by many things, but the three main influences upon this series are manga, other graphic novels, and video games. For example, O’Malley has stated that one of the major influences on this series was the manga RANMA 1/2. The book tells the story of a boy named Ranma who has been trained in martial arts all of his life, however, he is inflicted with a curse. Whenever cold water is spilled on him he turns into a woman, and whenever he is hit with hot water he turns back into a boy. This manga is on the whole comedic, and involves a lot of eccentric personalities intricately complex relationships.

Now let’s look at SCOTT PILGRIM. Definitely, on the whole, a comedic book considering this often quoted line that also made it into the awesome film adaption done by Edgar Wright:

READ: Wanna come back to the future? Check out our latest review of SPARKS #1

And honestly if I’m being like super honesty honest honest that’s definitely not even the funniest line, and I don’t know if I can say what my favorite is, but I promise you that there is plenty of comedy. (I don’t even want to put another line in here because I don’t want to spoil it for you.) In addition to the already awesome comedic tone the graphic novels have cultivated there are also some surprisingly complex relationships. For example, Scott has a relationship that is constantly being revealed over the 6 issues with both Knives Chau and his exe Lisa. In both of these relationships Scott denies many aspects of what occured with them because he has a major issue with personal accountability. Therefore, while this issue can be manifested in funny ways it also demonstrates a severe issue Scott has with relationships and his ability to access and understand his own emotions.

Now, in addition to the many references layered into SCOTT PILGRIM from manga there are also a lot of humor and plot derived from video games. Scott constantly wins coins:

But in addition to that there are constant references to STREET FIGHTER, one of Bryan Lee O’Malley’s favorite video games, and pretty much every encounter that Scott has with another villain is some form of boss fight, and trust me it covers many different versions (musical versions even…that’s the only hint I will give you.) The movie version (which seriously I really think you should consider investing some time in have I mentioned that yet? Yes? Okay good.) even has a direct reference to it in the form of Soctt and Knives playing a knock off version of that very game.

A Manic Pixie Dream Girl who is not Manic, Pixie, or a Dream

Now I am always the first one to call out a terrible manic pixie dream girl (*coughcough*GARDEN STATE*coughcough), but I am also one of the first to admit when an excellent example of the trope being deconstructed occurs. Some of my favorite examples are in (500) Days of Summer and Scott McCloud’s The Sculptor, but I have to say that Ramona Flowers, in this book, is definitely one of the stronger subversions of the trope in my opinion.

Making her first appearance as literally the girl of his dreams, Ramona does not appear to have a lot going on behind the scenes when she is first introduced. She’s cool. She roller skates, but what is that thing with the glow ringing around her head. You can all see that too? Oh well I guess it is no big deal. Spoiler alert: it becomes a big deal. Even bigger spoiler alert, Ramona goes on to become so much more than just the girl of Scott’s dreams. Revealed to have a complicated past while through the course of the story she creates friendships and bonds of her own in Toronto, Ramona is not just a girl who walks into Scott’s life to fix him. Quite the opposite in fact. Scott must fix himself from the gradually more problematic problems that continue to plague his life from his complete inability to effectively “deal”.

READ: Marvel just relesaed their TRUE BELIEVERS series and we’ve got a review of one of our personal favorites, SPIDER-GWEN!

Ramona on the other hand is one of the best female characters that I have ever encountered. I have even dressed up as her for Halloween so you know that my love is real. But similarly to the conversation that Summer and Tom have in (500) Days of Summer, Ramona makes her self-respect and opinion known in one of my favorite interactions of the 6th issue: 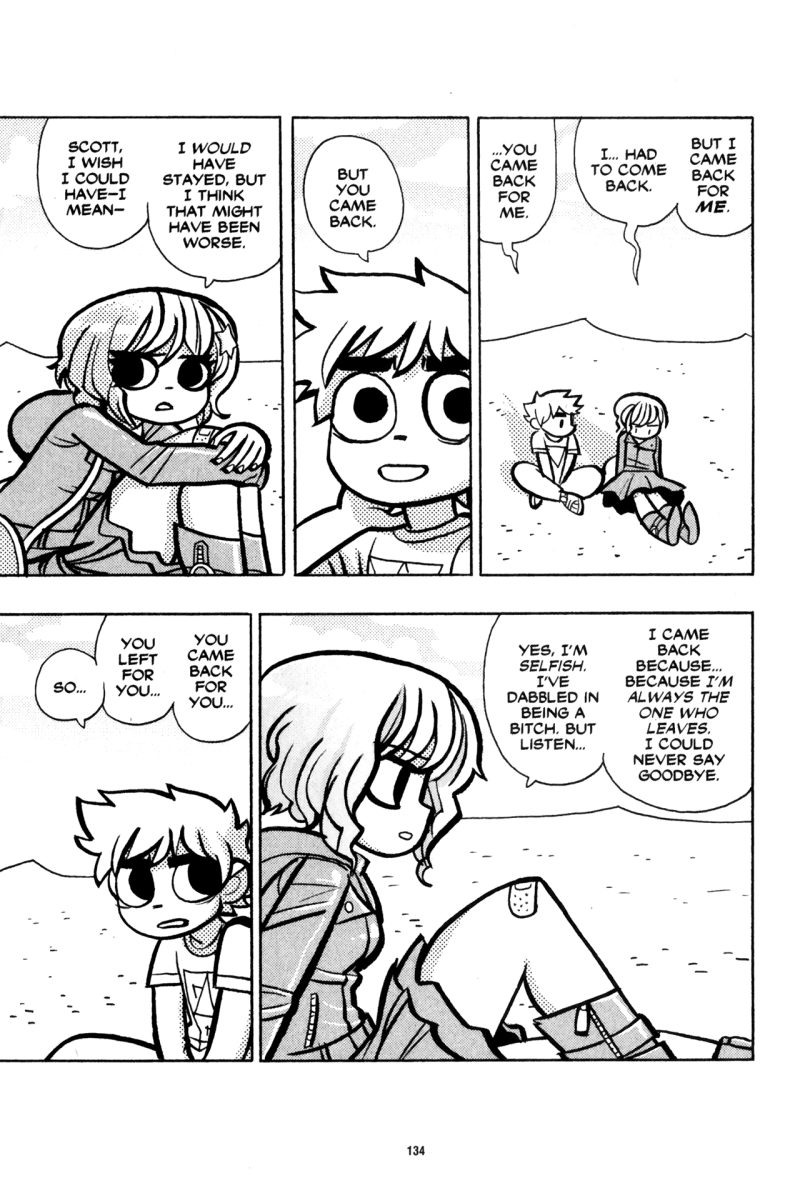 The phrase “I’ve dabbled in being a bitch” is actually one of my favorite lines ever, but what I think is most stricking about the book version of this character is that she’s nobody’s savior. She’s too busy being her own to even begin, you know?

I say that as a person who actually really loves Scott, but the book makes it pretty clear throughout that Scott might not be the perfect male role model. For example, one of my favorite jokes in the book occurs in the first issue when Scott says that he could never stop sleeping with his roommate Wallace, also one of my favorite characters, because he doesn’t have another bed. It is then revealed by humorous labels that everything in the apartment is owned by Wallace. At least, all of the decent stuff is owned by him. 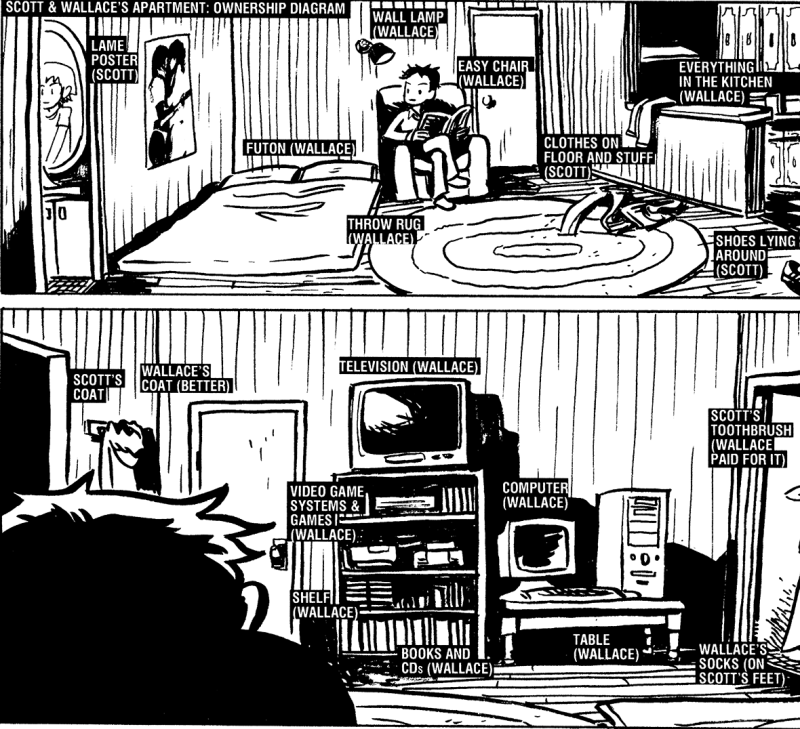 Scott is not a motivated individual, which is foregrounded once again later whenever it is revealed that he does not have a job. After jokes are made about this Scott walks around to his friend’s various places of work and is always too afraid or nervous to ask for a job.  There is even a joke levied at Scott throughout the entire run that Scott is the nicest guy that Ramona has ever dated and how pathetic that is. But of course, the biggest offense is that Scott cheated on Ramona and Knives with each other. This deception is such a big deal that it basically causes the big break that occurs at the end of the fifth issue. Furthermore, Scott’s belief that it’s not a big deal and that he only wronged Knives because he ultimately chose Ramona is demonstrated to be debatably the attitude that upset both the audience and Ramona the most.

READ: Race has never been a strong subject for comics, but we look at how far they have come since the first SECRET WARS!

Overall, these are just some examples of the way that Scott is awful, but he is also charming, funny, and endearingly simple. When you add all of these characteristics together with the mistakes and negative qualities that I have mentioned it gives you an entertaining and well rounded character that is extremely enjoyable to watch while both winning and losing.

SCOTT PILGRIM isn’t only the series that got me into comics. It is the series that showed me how funny, smart and accessible they could be. It integrates elements from all different types of media (video games, movies, and manga) and uses those influences to be self-referential and witty. At the same time, however, SCOTT PILGRIM is a emotional story. It is a rom com, while also being a story about loss and ineptitude. But hey, maybe I’m completely full of shit and all of the stuff that I laugh at and relate to in this story only works for me. Regardless. You should read it. Or else you’ll be get fat. Not reading SCOTT PILGRIM makes you fat.