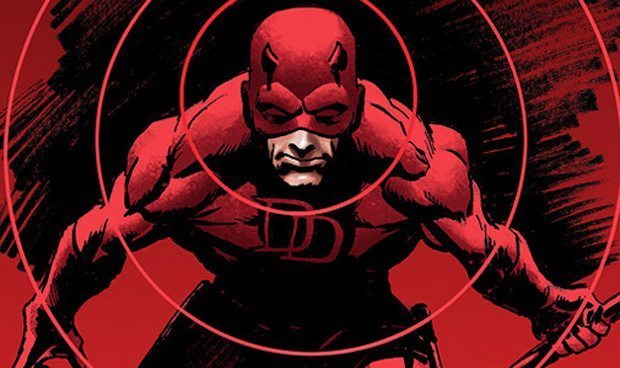 Color theory is a body of practical guidance to color mixing and the visual effects of specific colors. That is to say, how color is used in art and how it helps convey meaning in a piece of art. It’s important to think about art in a book like DAREDEVIL where the title character is blind, as such major irony begs further analysis. Why should we specifically look at color theory?  Isn’t the art of every comic important? Well, yes. But the reason we’re looking at color theory is because color is the one thing Daredevil can’t “see.” Yes, he can run his fingers along a painting and get an idea of the painting’s outline and composition, but he can’t see how blue the sky is or the reds and purples of a sunset. Color in DAREDEVIL is an element of storytelling just as powerful as the script or art is. We could spend days on the subject, but looking briefly, we can see how different runs used color to convey different aspects of DAREDEVIL’s character: his radar sense, fighting style, and aggression.

The “radar sense” in DAREDEVIL is one of the best artistic merits of the series. In Mark Waid’s run on the title, colorists depicted Hornhead’s radar sense in purple tones. He is also able to sense people’s entire circulatory systems, which are highlighted in red. The interesting thing about Daredevil is that he senses subtle details like this all the time. Anytime we see him in action, he is still processing all that information. It doesn’t go away just because we don’t see it on the panel. We’re just reminded of his radar sense by the highlighted colors used to depict this information during important scenes. 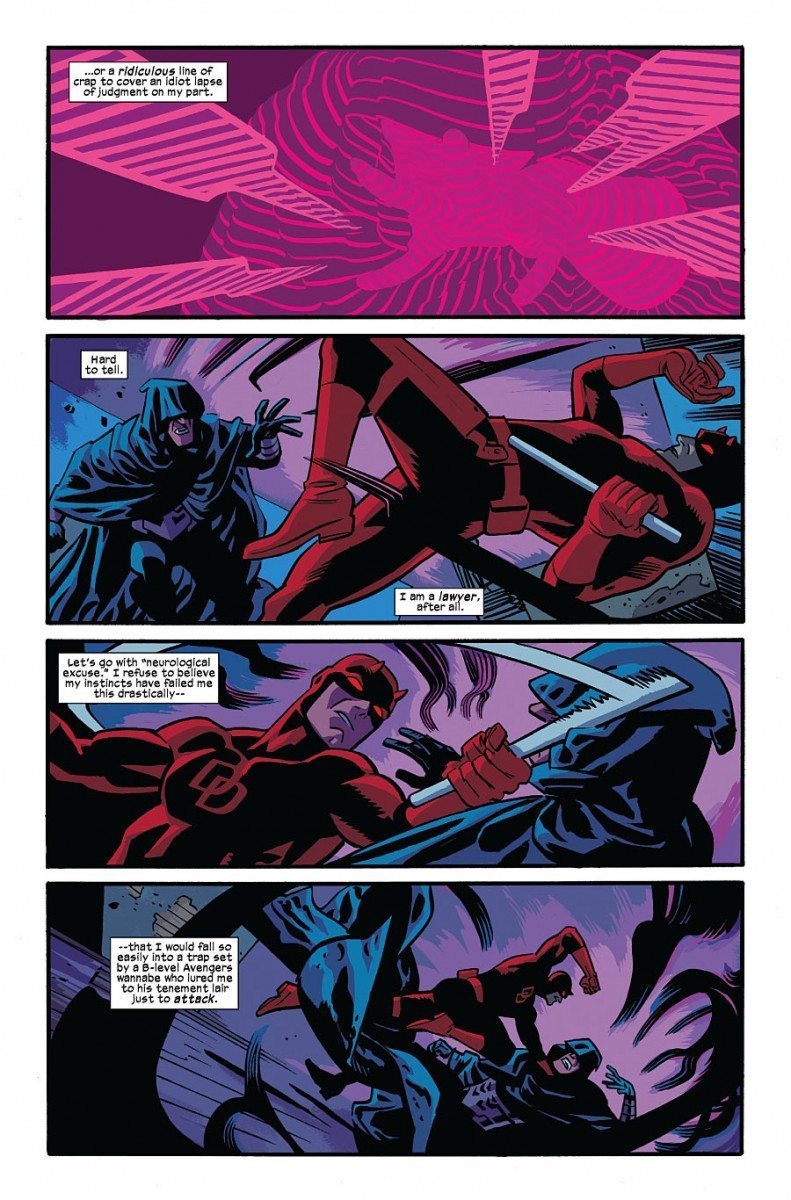 READ: Check out our DAREDEVIL Character Spotlight on Melvin Potter, aka Gladiator!

Daredevil is constantly bombarded with sensory data because his radar sense is always active. His ability to perform under a constant barrage of these details speaks to his level of psychological discipline. It’s hard to concentrate in a library when someone is whispering loudly, but can you even imagine how hard it would be to fight off half a dozen hitmen when you can hear that same conversation from four blocks away? He knows many minute details about his opponent because of his acute sense but his psychological discipline helps him to maintain his focus during a fight. His ability to even function under the constant onslaught of sensory data tells us he’s mastered his mind as well as his body.

The radar sense does much more than show Daredevil’s point of view. It shows a level of calmness many martial artists call zen, meaning he has an extremely acute knowledge of and respect for his opponent as well as himself. This is what allows him to fight so effectively. The use of color in this run shows Daredevil’s radar sense and the zen it provides him.

READ: Want to catch up on the latest DAREDEVIL arc? Read our review!

Frank Miller and Klaus Janson’s run on DAREDEVIL is iconic. They redefined the character and introduced classic friends and foes. Elektra, Bullseye, and the Kingpin all made their mark on the Marvel Universe during this run. It also used a great artistic technique to illustrate Daredevil’s death-defying stunts by drawing faded versions of Daredevil show how intricate and acrobatic his movements are. It adds a real sense of motion to a series of stationary pictures. It’s a great use of the medium and what makes comics a distinct art. 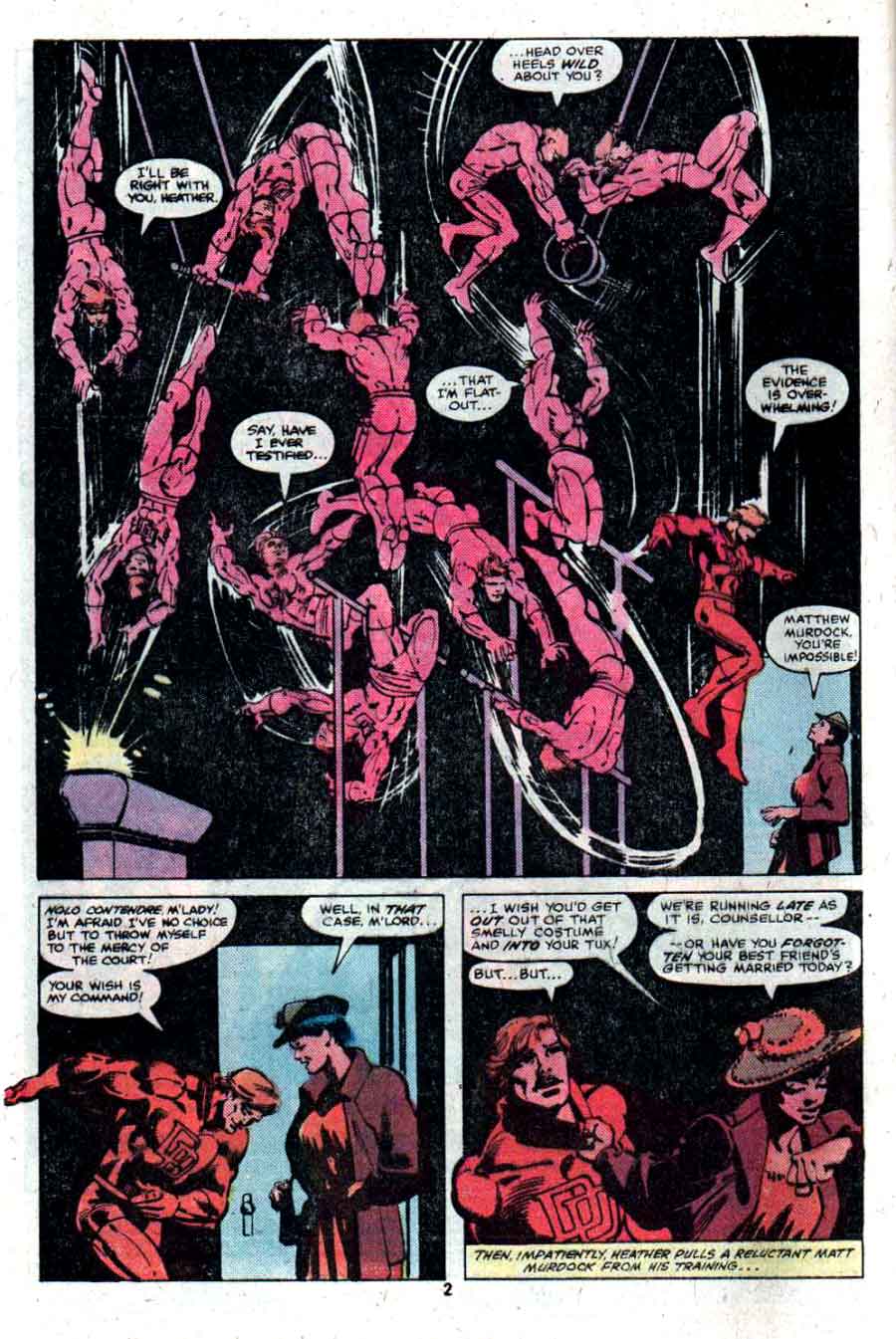 Daredevil isn’t the only moving part in these comics. His signature baton ricochets around the environment to meet its unlucky target. The color used in scenes with his baton in action illustrate each impact the weapon makes. The reader tracks its movement along with those of Daredevil. Both Daredevil and his signature weapon are intricate moving parts working together. The color used to show this relationship shows how his weapon is an extension of himself. Color in this run shows Daredevil’s dynamic movements and his high proficiency with his baton.

READ: Curious about how DAREDEVIL fits into the future of the MCU?  Read our analysis here!

The current run of DAREDEVIL by Charles Soule and Ron Garney with colors by Matt Milla is the most color-heavy run to date. Colors frequently change to shift one’s focus and monochromatic schemes are typically used to set a scene. Color also allows us to see as Daredevil does by illuminating heat signatures from his invisible sidekick, Blindspot. 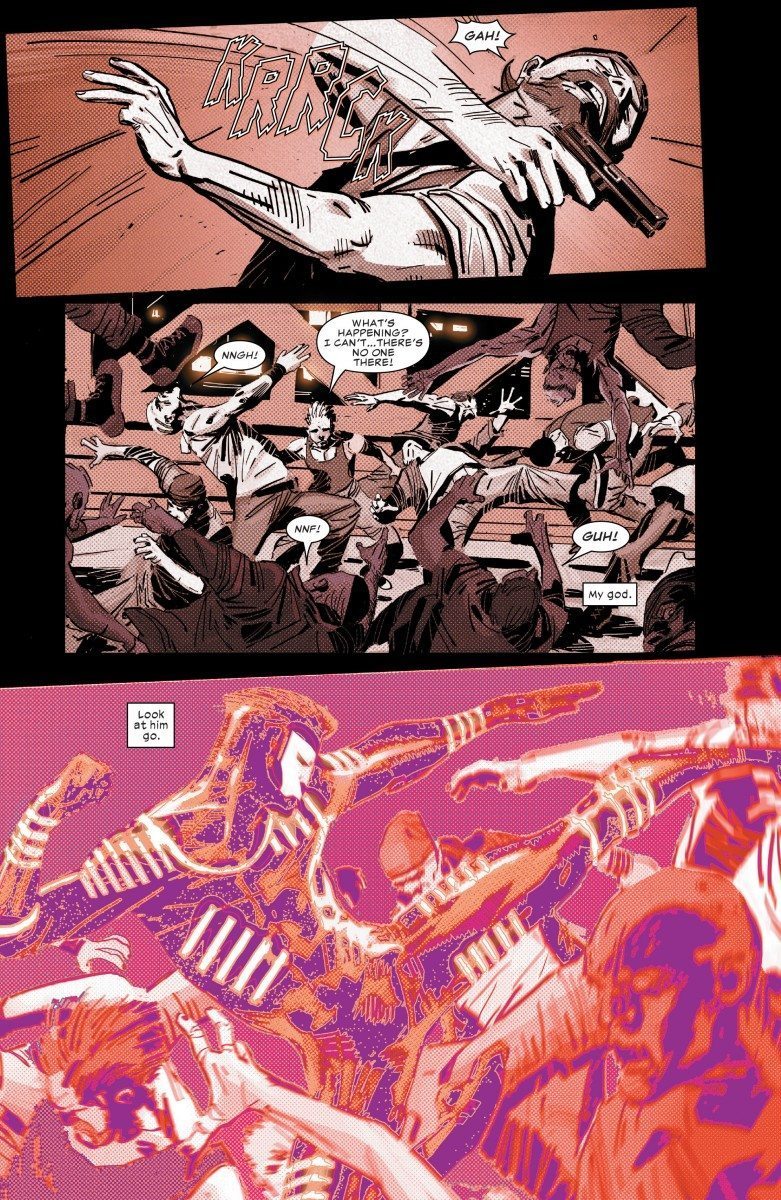 Fight scenes are washed out in reds, showing the intensity of the action and Daredevil’s aggression. This color change also reminds us of the newfound aggression in Matt Murdock, who has recently quit being a defense attorney and moved to the prosecution side because he believed he would better be able to go after criminals if he could also do so in the courtroom. These color choices remind us of the new direction the character is headed in for the “All-New, All-Different” series. The color in this run shows a new way Daredevil “sees” as well as the character’s new sense of aggression.

The color in DAREDEVIL being used to heavily to tell the story reminds us what Daredevil is missing out on. As stated previously, he can’t see any color. Despite this, he saves lives and stops crime. The irony that Daredevil is unaware of any color depicted so powerfully in his series serves to remind us of his constant persistence in the face of adversity.

Color is a great tool in comics because it’s so easily manipulated. These manipulations, like edits to a script or sketches to a storyboard, are part of the storytelling process for comics. It’s easy to forget how much time and talent go into this process of comic creation. But without it, our favorite defender of Hell’s Kitchen wouldn’t be the same.