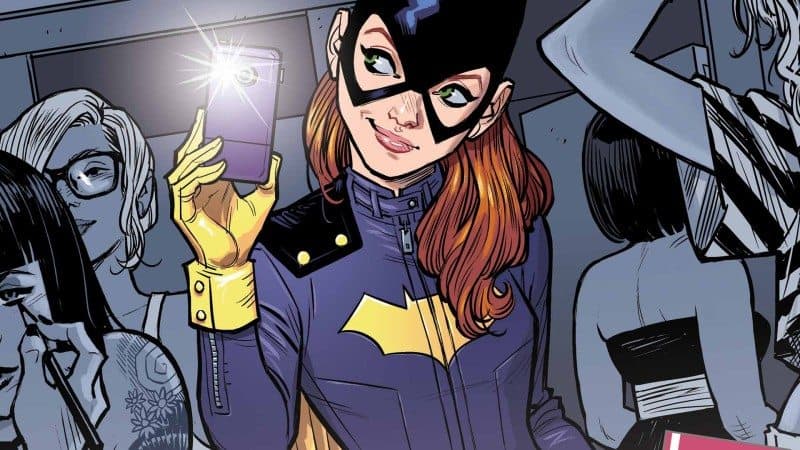 Batgirl of Burnside Volume One By Cameron Stewart, Brenden Fletcher, and Babs Tarr. (Collects Issues 35-40 of Batgirl, and Material From Secret Origins #10 With Art By Maris Wicks)

Since the New 52 began in 2011, Barbara Gordon’s return to the cowl had been written by veteran writer Gail Simone. Her Barbara was written very similarly to the character’s pre-New 52 incarnation, and the series sported a dark tone and numerous crossovers with the main Bat-books. While I was a fan of Simone’s take, especially at the beginning, by the time the title hit the mid-30s it was in need of a change. That overhaul started with Issue 35 and the introduction of a new creative team; Co-Writers Cameron Stewart and Brenden Fletcher and artist Babs Tarr, who pencilled over layouts by Stewart. Abandoning the grim and gritty milieu of Simone’s run, they filled the book youthful energy, bright colors, and vaguely cartoonish character designs. 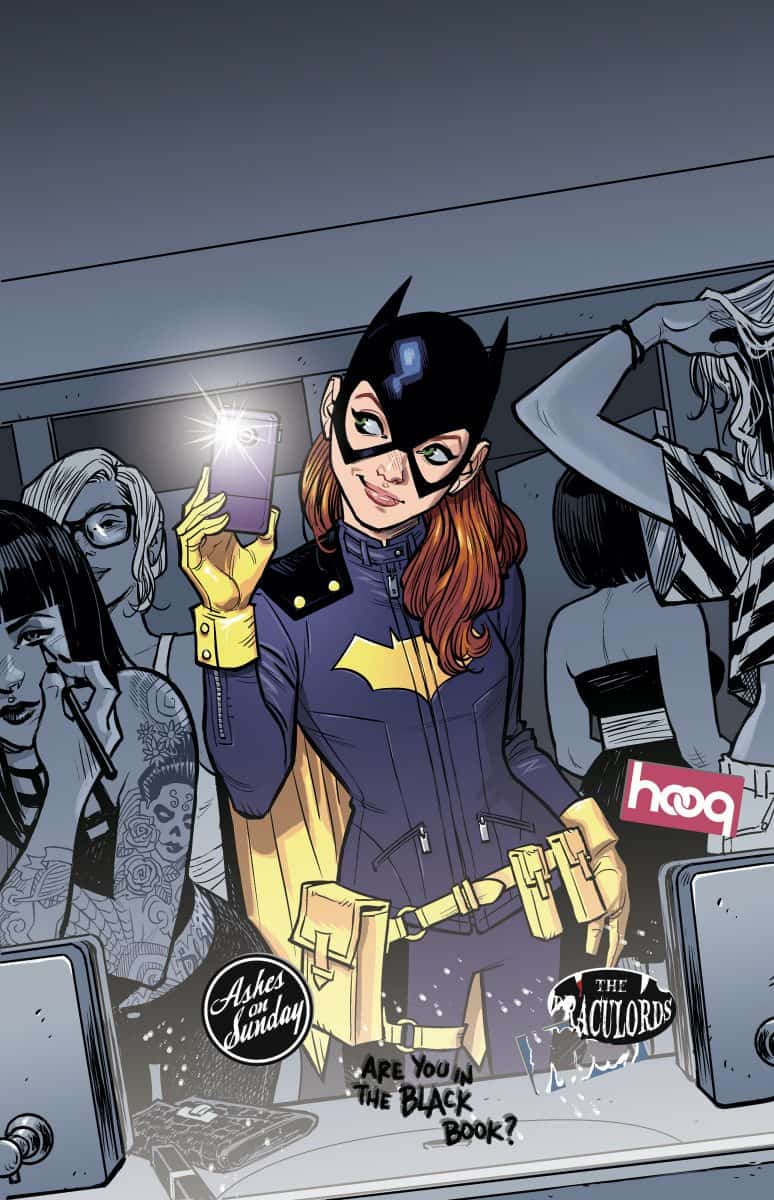 The collection kicks off with Barbara Gordon moving to the trendy Gotham neighborhood of Burnside, a hipster enclave in the vein of Brooklyn’s Williamsburg, to begin attending graduate school and generally start fresh in her life. She moves in with Frankie Charles, a programmer and muscular dystrophy suffer who Barbara met in physical therapy some years earlier. Her fresh start hits a quick snag, as she gets heavily intoxicated during her moving in party, and wakes up this morning with a wicked hangover to find her laptop missing, and her costume and gear inadvertently blown up by one of her own security devices, which activated when her laptop was compromised. After assembling a new DIY costume, she’s eventually able to track the stolen laptop, and hundreds of other pieces of stolen tech, to celebrity identity theif Riot Black. She’s able to get her laptop back from Black, but over the course of the next few weeks, she’s challenged by several villains that strike very close to home. 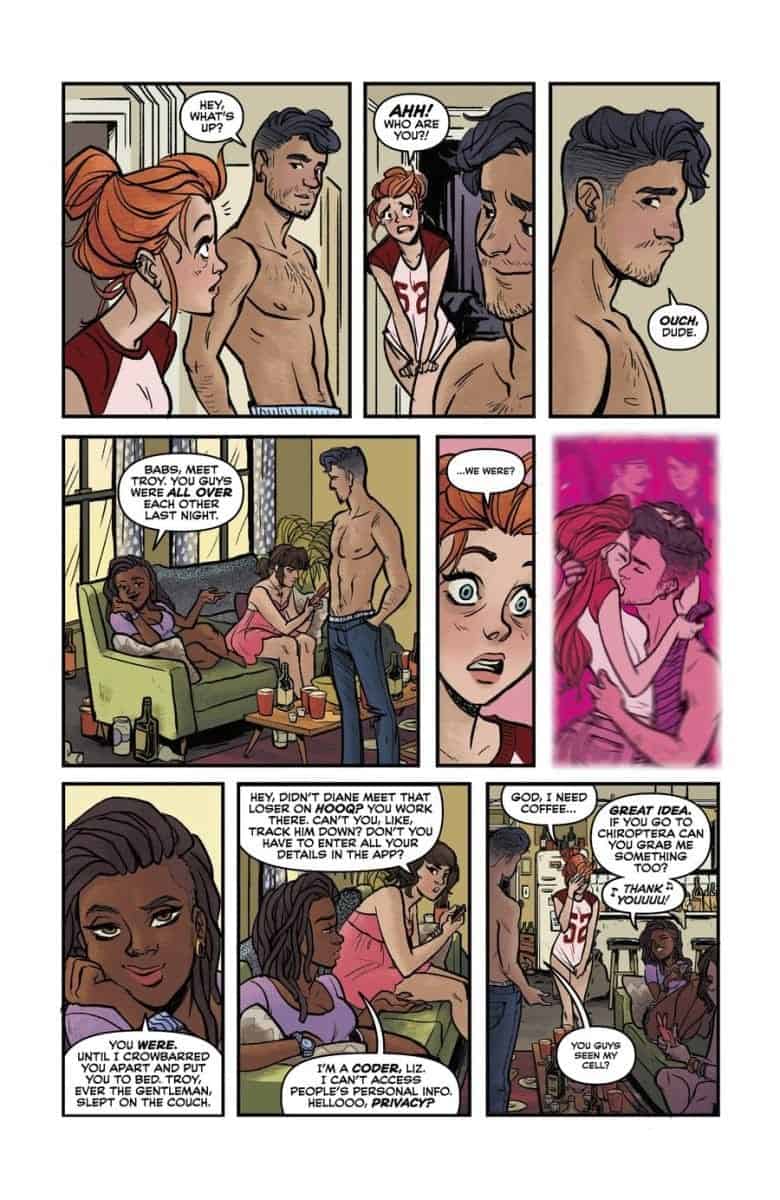 There are a pair of twin assassins who cosplay as villains from a an anime Barbara enjoyed as a child, an artist who dresses as Batgirl who plans to kill her to take over her identity, and even a reality TV star who leads Barbara on a destructive chase that leaves the residents of Burnside hostile towards the new vigilante in their midst. Said hostility is amplified when a mysterious hacker places a 20 million reward for Batgirl on Hooq, a dating site/social media hybrid app prevalent in the book. Things in Barbara’s personal life begin spinning out of control as well. Riot Black’s theft and subsequent wipe of her laptop proved to be doubly devastating. It not only apparently wiped out the algorithm of her brain pattern than was the backbone of her grad school thesis,  it also set off the incendiary device in Barbara’s Batgirl van that destroyed her gear and the home of Black Canary, causing a rift in their friendship. 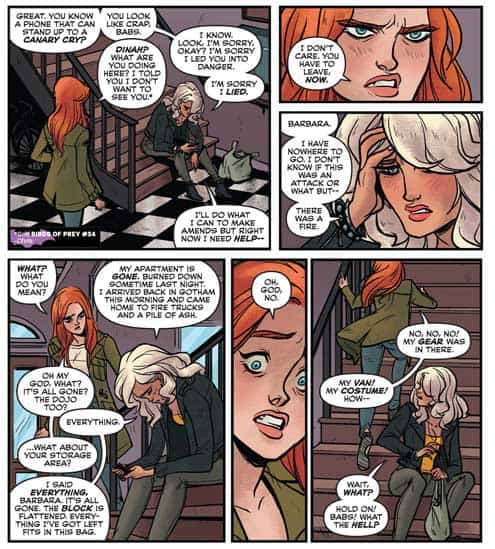 On the romantic front, Barbara begins dating with a young GCPD officer, but his intense dislike of Batgirl and her methods puts a strain on the relations. However, it’s in this this relationship that Barbara gets the first hints of what’s been orchestrating many of the problems she’s been going through. Turns out the cop has been communicating with Barbara in conversations she has no recollection of having, leaving her befuddled.  After settling their differences, Dinah and Barbara have an intense training session where the former begins questioning the latter about why she’s not acting like herself. This question of identity leads Barbara to the realization that the person who hasbeen attempting to sabotage her life has been her algorithm all along.

In a flashback, we learn that when Barbara was initially crippled, she copied her brain patterns to build an algorithm that would be able to predict potential crimes, and send an operative to stop them. Said algorithm gained sentience, but with no memories of any of Barbara’s life after she was cured of her paralysis and considered herself the true Barbara Gordon, and desired to take over Batgirl’s body to truly protect Gotham City. The climax comes when the algorithm, using a tech-mind controlled Riot Black, kidnaps Frankie and commandeers a weapons satellite, and armored drones to attack a concert in Burnside where it’s lured all the residents it has calculated will eventually commit crimes. Initially Batgirl is captured during her rescue attempt, but she’s able to break free before the algorithm can take over her brain via the electronic implant in her spine. She incapacitates Riot Black,  has Dinah use her Canary cry to destroy the drones, and distracts the algorithm long enough that Frankie can disable the weapons. She then convinces the sentient algorithm to destroy itself by telling it that it must do so to protect Gotham City from itself since it was about to destroy citizens who make up Gotham City. The volume ends with Frankie having rebuilt the algorithm without the malevolent remnants of Barbara’s personality, seemingly setting her up as the new Oracle. Meanwhile Dinah announces that she’s scored a record deal and is going on tour with a band, leading into the Black Canary solo series.

Cameron Stewart and Brendon Fletcher have crafted a truly unique voice for their Batgirl series. It reads as a very accurate reflection on what it’s like to be a 20-something during the mid twenty-teens. I can see my own life reflected in many of the shops, apps social situations that Barbara goes through, and how she reacts to them. While some took issue with Barbara’s night of drinking and subsequent hangover, I personally thought it was another very realistic moment in the life of someone her age, and one that I (and I’m sure many others) could relate to. The supporting cast is also well constructed. Frankie and Dinah get the most page-time, and are both really well-written. Hopefully with Dinah heading off on tour in her own book, some of the more entertaining secondary supporting characters such as equipment expert Quadir Ali, his sister Nadimah, and Simone-era holdover Alysia Yeoh will get more development and page-time. The only major hiccup in the book from a plotting standpoint is the climax. While the idea of Barbara squaring off with a part of her own psyche that has no memory of her recovery from paralysis is an interesting one, especially since there’s a meta component to it that puts New 52 version against what is essentially the pre-Flashpoint version of herself. However, the resolution of the conflict feels a bit underwhelming, and the way Barbara convinces the AI to destroy itself is a bit of a Sci-Fi cliche. 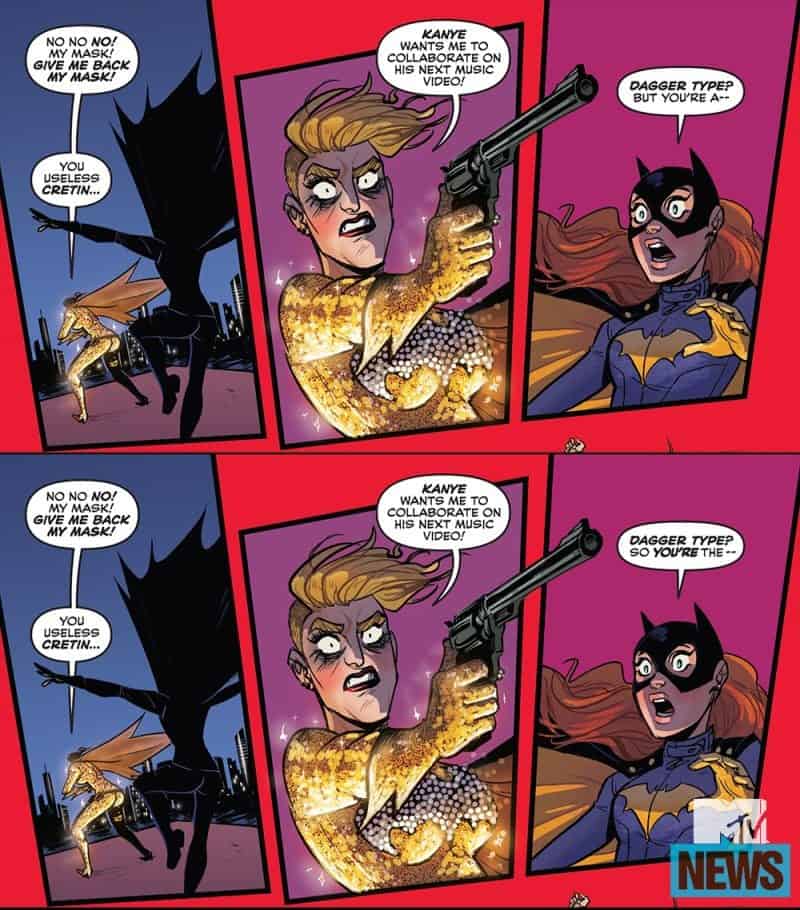 I would be remiss if I didn’t talk a bit about the controversial Issue 37. In said issue, there’s an imposter Batgirl causing havoc in Burnside. Eventually we learn that the imposter is none other than Dagger Type, a male artist and photographer who, at the behest of the algorithm, wanted to kill Batgirl and take over her identity. At the time of it’s publication, the issue faced backlash from the Trans community over the portrayal of Type, especially the dialogue used in the scene where his identity is revealed. To the creators’ credit, they immediately apologized at the time. They and DC have gone one step further with this collection, removing the potentially offensive dialogue and rewriting the scene. Personally, I still find the character a bit problematic, but the changes really do help. 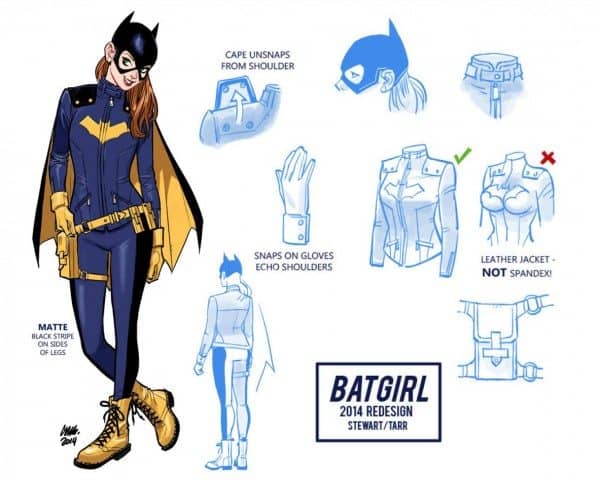 Artistically, this first volume of Batgirl is a triumph. First off, the Stewart/Tarr redesigned costume looks great. It holds on to the iconic colors and general look of the Batgirl ensemble, while modernizing it in all the right ways. The art in the series itself is fantastic. Tarr’s pencils, done over kinetic layouts by Stewart, really pops off the page. Her figures have animated qualities without looking cartoonish, and they really fit with the story being told by the writers. The artistic highlight of the collection would have to the two page spread in the first chapter detailing Barbara using her nearly perfect memory to recall the ends of the night before. Stewart’s layout concept (which can be seen in the extras discussed below) is something I’ve never seen before, certainly in a DC Comic, and Tarr’s finished figures and apartment layout add a great layer of realism and depth to the scene. 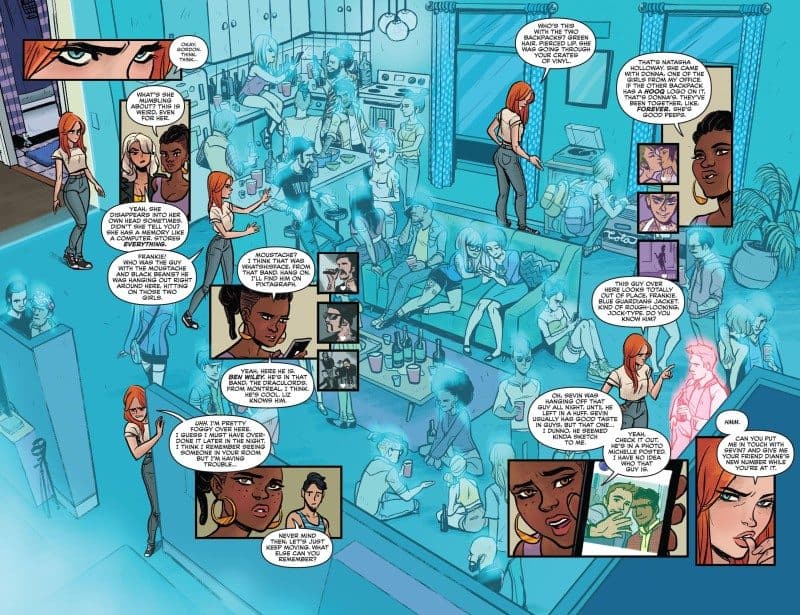 Batgirl of Burnside Volume 1 is a must read collection in my opinion. The story by Stewart and Fletcher, with art by Stewart and Tarr reinvents Barbara Gordon as a truly realistic twenty-something for modern times, and tells a very interesting technology-based tale. While there is a slight stumble at the end that nudges my grade down slightly, it does little to damage the book’s enjoyability or high recommendation from me.

Batgirl of Burnside Volume 1: A-