The horror genre has seen many iterations and many more terrifying monsters. So many, in fact, that innovating within the genre is no easy task. With so many iconic monsters like HELLRAISER’s Pinhead or THE THING, finding your own niche can be almost impossible. Surprisingly, COLD SPOTS #1 by Cullen Bunn and Mark Torres manages to find its foothold. With a unique look at the spirit world and a thematic backdrop, COLD SPOTS #1 brings new life to a somewhat monotonous genre.

A Defense of Steven Moffat’s DOCTOR WHO

The dead of Quarrels’ Island are coming back to life. No one knows why or how to stop it. All they know is that their loved ones, whether old or young, have started to roam the island again. This isn’t, however, a zombie story. These are the spirits of the long departed, and they bring with them a powerful and deadly cold. Danny Kerr’s long-lost wife and daughter have fled their home and sought out sanctuary on the island. As Danny begins searching for answers to their disappearance, he discovers a connection between his daughter Grace, the spirits roaming Quarrels’ Island, and the unnatural cold that has disturbed life there.

The Citizens of Quarrels’ Island 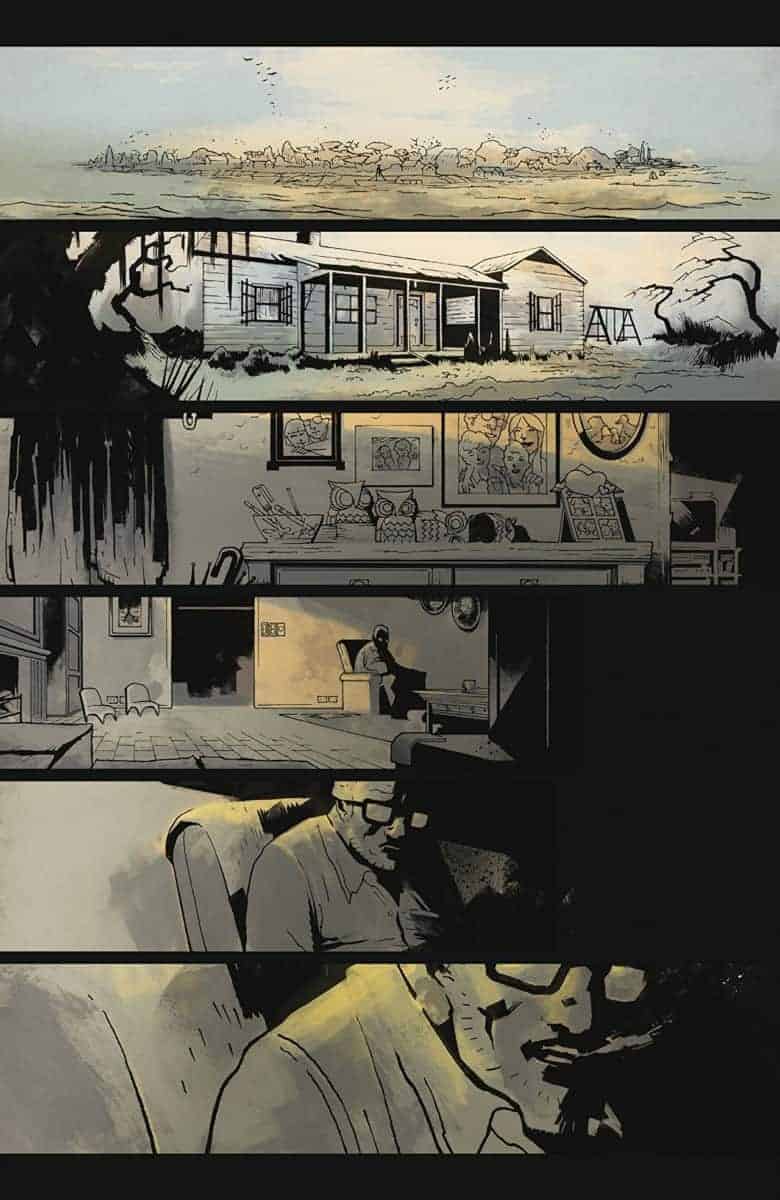 COLD SPOTS #1 stands out most for its wealth of brilliant characterization. As the POV character, Danny Kerr especially grabbed my attention. Watching him go through this story, you quickly come to understand that Danny is not a good person. He lies, he threatens, and he isn’t afraid to incriminate himself throughout the issue. Cullen Bunn does such a good job making this character believably unlikable. It is such a breath of fresh air to have such a flawed character take the lead role. It allows for the events of the story to actively change him. Danny is not a fit father. However, you can tell he still cares. The story never explicitly states their relationship (the father-daughter relationship with Grace is found from the Image summary). The way Danny reacts when he discovers Grace is missing, though, perfectly signals his concern.

Danny is the only character with any deep characterization, but I would still call COLD SPOTS #1 a complete success in that regard. The reason for this is that the side characters really stand out in terms of their personality. This is a must for this story. The entire population of Quarrels’ Island is seeing their past mistakes and regrets literally coming back to haunt them. The greatest moment of this issue comes near the end, when the ferryman and hotel owner meets his deceased lover. When we first meet him, he acts like a cocky know-it-all that forces a room on Danny. But when the spirit appears in his shop, he is a stuttering, broken mess. This shift in personality is all we need to understand how profoundly that spirit affects that man, and the same is true for all others affected by phenomena.

ELDER SCROLLS ONLINE: Is a Summerset Isle Expansion on the Horizon? 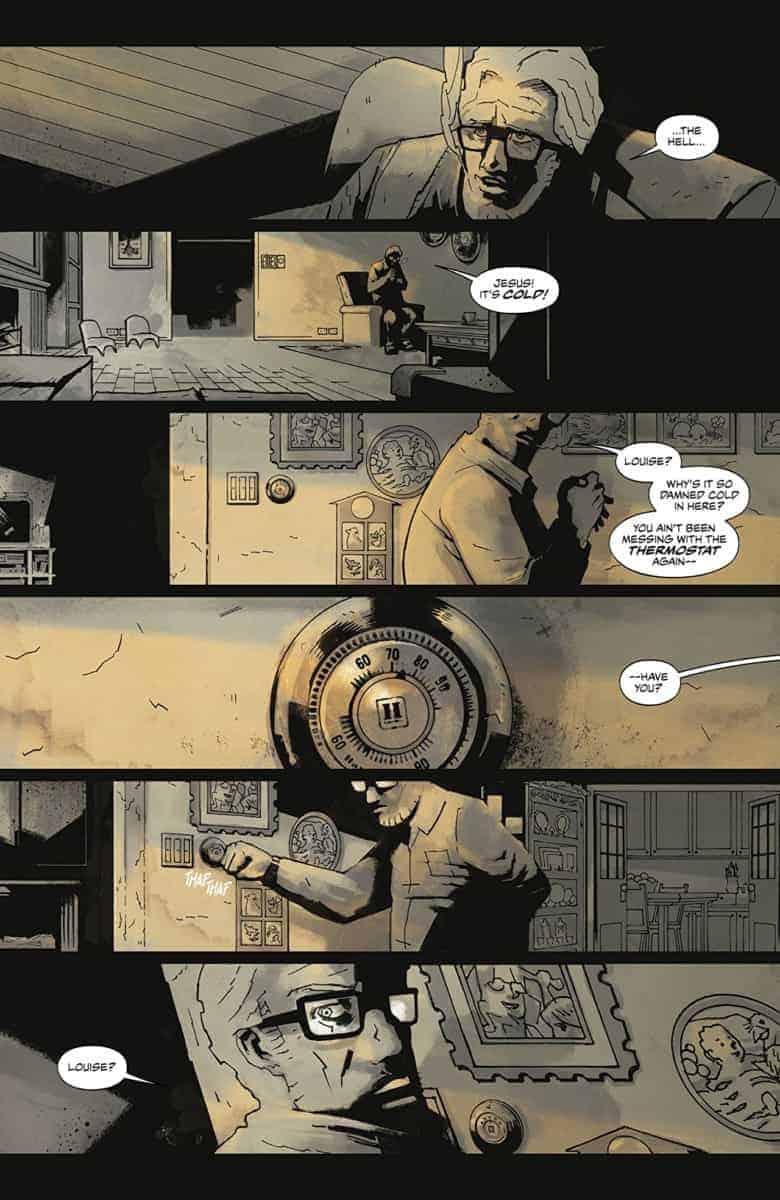 COLD SPOTS #1 has a really well-balanced plot. For a horror story, it is a rather slow burn, focusing more on the characterization and the dialogue than anything else. However, this isn’t a problem. Bunn does something really intelligent with this first issue. He breaches the subject of spirits and the supernatural immediately. By page 4, we have seen our first ghosts, and we have a sense of what is going on. This gives the rest of the issue a lot more weight. We aren’t simply waiting for the bad stuff to happen. The horror has already started. Danny is simply late to the game. This increases the tension almost immediately, making this story an incredibly fast read.

My one issue with COLD SPOTS #1 has already been addressed to a degree. The relationships aren’t particularly clear. From the Image website’s summary of the story, we can assume what Danny’s relationship to Grace, Alyssa, and Alyssa’s father might be. However, Bunn never explicitly states this information. I’m sure that there is a greater mystery here, and I cannot wait to explore it more. However, I need to know something. We get vague hints throughout the conversation between Danny and Grace’s grandfather, Arthur. Arthur is playing on some past relationship they had to get Danny to help. Nevertheless, Bunn needed to give me just a little bit more. If I knew for sure that Danny and Grace were biologically related, that would increase the story’s intrigue just that much more. As it stands, though, it just feels unnecessarily mysterious. 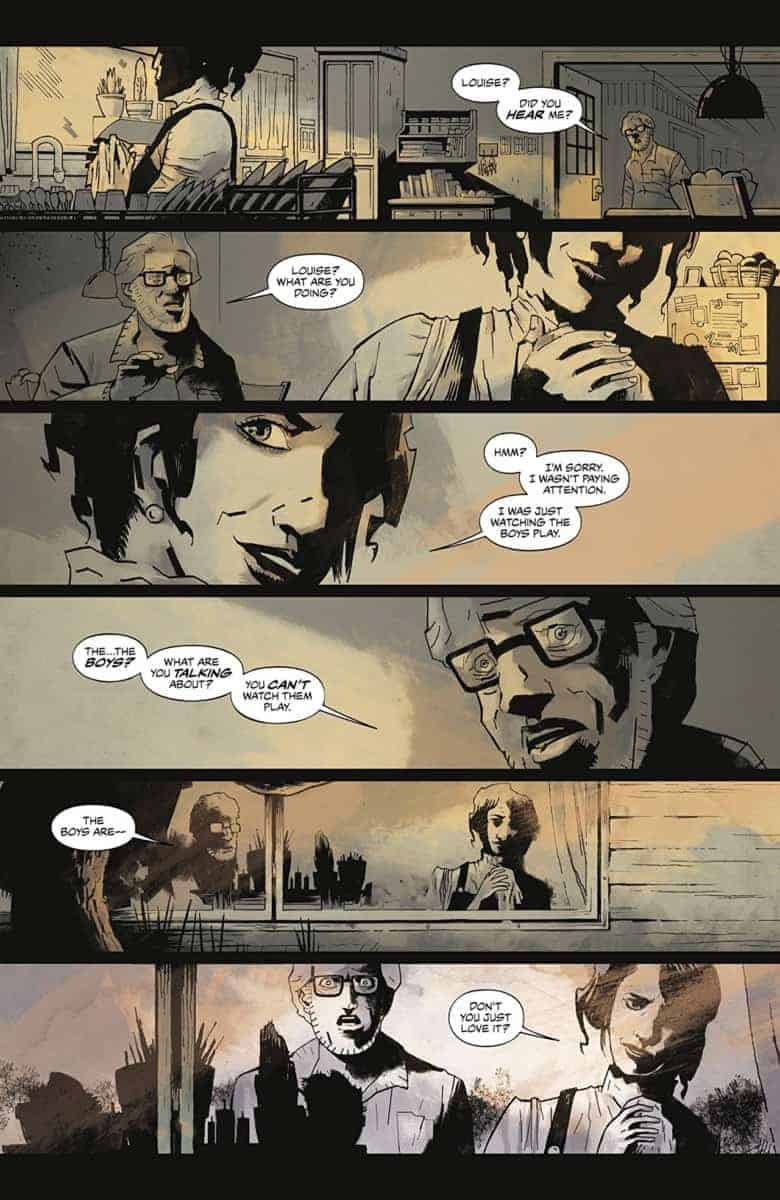 Mark Torres handles the entire artistic and design aspects of COLD SPOTS #1. Having never seen this artist’s work before, I was blown away. Torres brings an oddly stylized aesthetic to this universe. Most horror artists stick to a graphically realistic tone, but Torres’ style here allows him to play with tone more profoundly. Often, this book takes on a somewhat neo-noir aesthetic, with plenty of heavy shadows and bold swathes of color. This not only aids the investigative aspects of the story. It gives Torres the ability to lean into color theory to ramp up the tone. I especially love the sickly green tone that is constantly present around the Island. It gives the impression that you should want nothing to do with that place. Also, the smoke headed designs for the spirits is a stroke of genius.

THE UNSOUND: Interview with Cullen Bunn

COLD SPOTS #1 is an absolutely fantastic opening salvo for Image’s newest horror series. With a great visual aesthetic and loads of fantastic characterization, this is a must read for fans of the genre or just fans of good comic books. This isn’t a truly gory first issue, so those who shy away from the genre for that reason can still enjoy this tale. I did find issue with the mysterious relationship in Danny’s life and why they were kept a secret. Nevertheless, this is a small grievance in an otherwise incredible story. I recommend this issue wholeheartedly.