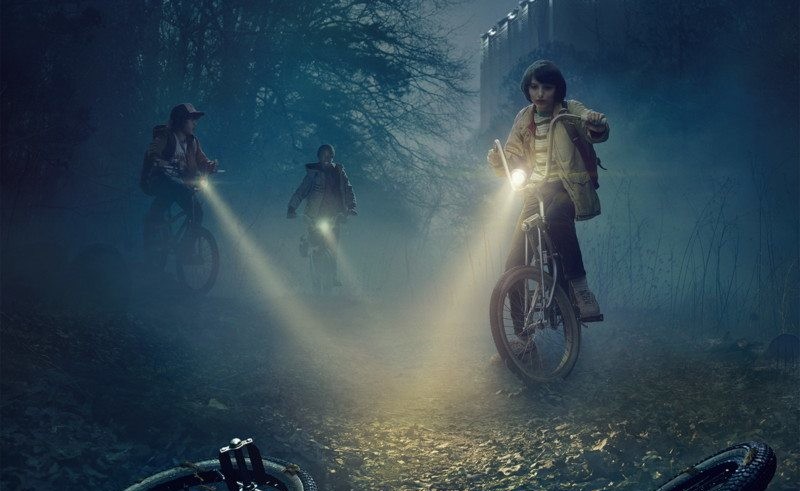 With the recent hit Netflix show STRANGER THINGS, Middle America is once again put in the spotlight in a genre it knows all too well: science fiction. STRANGER THINGS shares aesthetic ancestry with films like SUPER 8 in that they showcase some hard-hitting ’80s nostalgia to an audience that (largely) never experienced the 1980s. But beyond this, it shows another trend: the use of the familiar small town as the perfect backdrop to some unfamiliar things.

Middle America is often used to describe the land between the East and West coasts, including the South even though many of those states do have a coast. The term “flyover states” is also used for this area in reference to the fact that some coastal Americans will only ever see Middle America through airplane windows and have never actually set foot there. The term also brings up a sense of superiority, as if this entire section of America is somehow insignificant when, in reality, it houses more than half of the population. One reason some coastal Americans believe in the emotional disconnection aspect of the term “flyover state” is because, while almost 60% of the population doesn’t live on the East or West coast, the land area is much more spread out and therefore the people are more spread out. In states like New Jersey, which holds the title for most densely populated state in the Union, it’s nearly impossible to escape other people entirely. If you drive an hour in any direction, you’ll find someone. But in more rural-dominated states, neighboring farms and the people who live on them could be miles apart.

And all this seemingly empty space makes it an ideal place for folktales to spring up about the inexplicable, like crop circles or giants or lake monsters. More than that, it also serves as a convenient setting for movies and TV shows. Filmmakers can take advantage of not only the space provided but also the dismissive perception that the “rest of America” has for Middle America. If there’s nothing there, why not put something there? To add to this ideal, when there are variations in the landscape, like the Devil’s Tower in Wyoming that was used for CLOSE ENCOUNTERS OF THE THIRD KIND, the variation in question becomes much more dramatic and the audience is better able to fixate on the natural formation.

READ: SPIDER-MAN: HOMECOMING and a closer look at it.

Add this to the fact that Middle America is often seen as small town central and you’ve got almost everything you need to begin an out-there adventure. With the exception of certain areas, towns, and cities like St. Louis, Minneapolis, and Columbia, Missouri, this area also tends to be more conservative than their East and West coast counterparts. Because of this, we’re more likely to see an emphasis on the importance of keeping things small, from mom and pop stores to the government.

And herein enters STRANGER THINGS. It is the descendant of many science fiction shows and movies before it both in its use of ’80s aesthetics and settings as well as its themes and plot points. STRANGER THINGS uses the landscape of the fictional town of Hawkins, Indiana. While filming locations were in Alabama, the scenery used in the show stayed true to the area they were portraying: a small suburban town removed from urban society and surrounded instead by forest. It is, in fact, the forest outside of Hawkins that is central to the young gang of amateur monster hunters.

The landscape of Hawkins, Indiana is a force that is constantly balancing itself in the series. It’s where Will Byers comes face to face with the series’ monster, dubbed the Demogorgon by the younger characters. And while technically Will is “indoors” when he disappears into a parallel world the kids are calling the Upside Down, he is in a shed in his backyard. It’s hardly an indoor setting, especially with the woods still lurking behind the shed. (And, frankly, because a shed is a far cry from a house.) It acts more like a bridge between developed society and the wilderness, not quite cut off from nature as it’s very basic in structure, but not quite cut off from society as it’s still a man-made shelter.

Not too much later, we are introduced to Eleven, the runaway with psychokinesis. She emerges from the very forest Will Byers first encounters the Demogorgon in and it’s where the older kids find a gate to the Upside Down that lasts only temporarily. The forest is constantly giving and taking away, revealing new details like where Eleven came from to housing a scene that offers a sort of vague hope as to what might have happened to her in the end. The self-checked equilibrium keeps the function of the forest from leaning towards any one side. This balance paired with the geographical location of the show exposes Hawkins, Indiana as a liminal space.

However, while liminal spaces often refer to places of waiting, it can also be associated with things that have a touch of chaos. Because liminal spaces exist between destinations and their rules, they are separate from their surroundings and therefore follow their own sets of rules. A liminal space is not limited to waiting. It’s a place where the uncanny can be real, where the lines between reality and fantasy are blurred. Middle America embodies the liminal because of its mostly suburban and rural land. While perhaps the rural, as well as the urban, is considered on one end of the spectrum, Middle America provides a classic image of the small-town Americana that Hollywood and television thrive on to create a comfortable basis that’s also far enough from more populated states to make it seem more mysterious. It is at once reassuring in its seemingly unassuming presence and yet enigmatic because of the cultural and physical differences to its coastal audiences. And for Middle Americans, it’s a showcase.

And because the land is so connected to the story, it’s logical that the naturally and randomly occurring bridges that STRANGER THINGS uses are mostly outdoors. The wilderness itself acts as a liminal space and in a sense, it allows the Middle American landscape to act as a liminal space, as well. Middle America is sandwiched between the East and West coasts, areas that are often contrasted with the heartland culturally and physically, with the coasts having more in common with each other than with the land in between them. It’s liminal not so much because it’s a place of waiting but because it’s a place in between. Because things are structured differently in Middle America, different things are valued. This difference is then balanced with the reality that although there are a lot of differences between the geographic areas, they still belong to the same country and therefore still contribute to the same overarching culture of America.

To reinforce this idea of “united in our differences,” STRANGER THINGS makes use of a value that is commonly associated with rural conservatives but is also a value most Americans find important regardless of party affiliations: a non-invasive government. Sure, the monster is the more grotesque adversary and nothing quite beats a real, non-figurative monster that needs to be destroyed. But the reason for the beast’s ability to get into our world in the first place is because of a classic case of government experiments gone wrong. In fact, everything that goes wrong in the show can arguably be traced back to the government and other authoritarian figures from the Department of Energy people at the Hawkins National Laboratory pushing too hard, to the police who somehow “find” Will Byer’s body in one episode when we as an audience know that he still alive in some shape or form. Who knows what kind of monster, if any, the kids will have to face in season two. Whatever it is, the people behind it will still be there and our favorite gang of adolescent monster hunters will, eventually, face them.