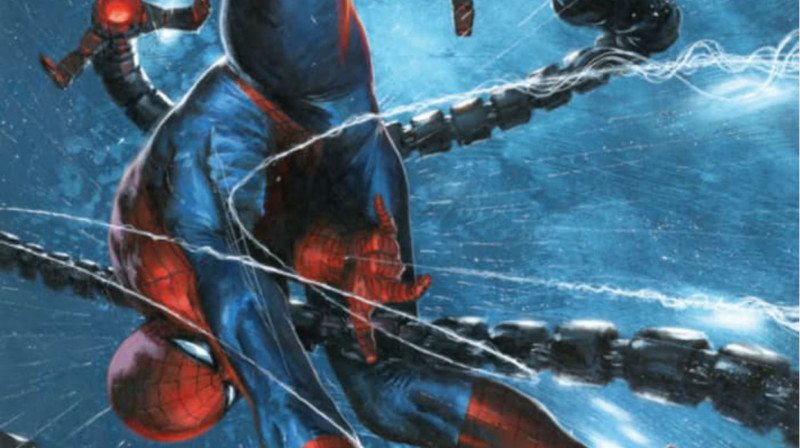 After the last issue kicked off the year’s largest Spider-Man event with a bang, CLONE CONSPIRACY #2 keeps the ball rolling, illuminating a great deal about the true nature of New U. This however, raises even further questions about the motives of the Jackal. CLONE CONSPIRACY #2 raises the already-high bar set by the first issue of the mini-series, both in terms of complexity and artistic excellence. 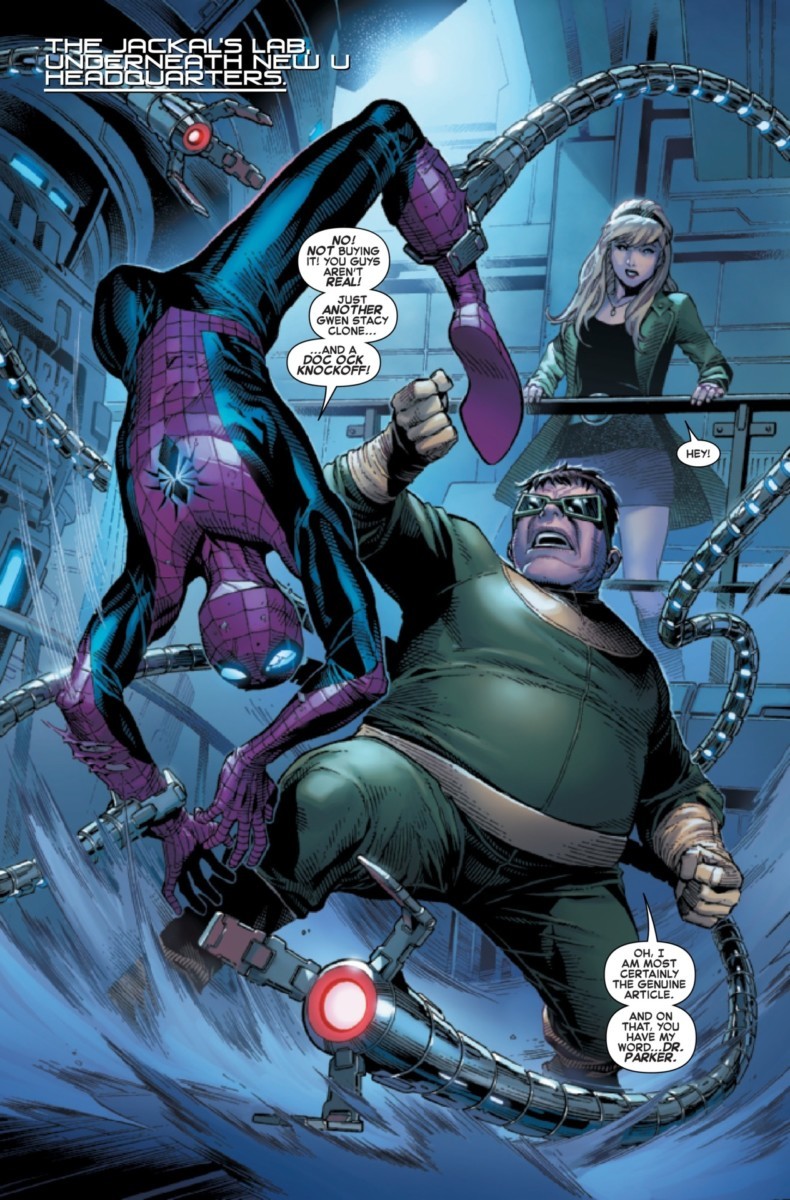 The second installment of CLONE CONSPIRACY kicks off with a mysterious figure tearing through the streets of San Francisco. It is revealed to be none other than Kaine, the Scarlet Spider! He emerges from what appears to be a dream, roused by demands made by a “guest” from behind closed doors. However, Kaine’s appearance is a bit confusing. He continually references other ‘worlds,’ and while this could just be in reference to Spider-Gwen’s Earth-65, Marvel SVP David Gabriel let slip that a later issue of CLONE CONSPIRACY will contain a reveal that will “truly crack the Spider-Verse in half”.

READ: Not caught up on DEAD NO MORE? Check out our review of CLONE CONSPIRACY #1!

Back at New U Headquarters, constrained by metal tentacles, Spidey learns just how Doc Ock maintained consciousness throughout the length of time between SUPERIOR SPIDER-MAN and DEAD NO MORE. The Jackal (aka cloning expert, Miles Warren) leads Spider-Man to The Underworld, a sector of New U’s headquarters that contains every villain the webslinger’s ever killed and everyone who’s ever died on his watch. The issue culminates in a couple of shocking twists, the first of which allows Spidey to escape unscathed from New U, while the second will leave you itching to get your hands on the next issue to find out what happens next!

READ: This analysis of SILK illuminates and expands upon her role as a darker take on the classic webslinger!

I’ve read the entirety of Dan Slott’s tenure on the exploits of Peter Parker, in AMAZING SPIDER-MAN and beyond, and DEAD NO MORE is shaping up to be one of my favorite Spider-Man events yet. Despite accumulating a vast amount of wealth, Slott’s Parker retains the everyman appeal that had awkward teens flocking to the title in the 1960s. While responsibility has always been a huge theme in Spider-Man comics, family, love, passion, and guilt are also omnipresent, essential to Peter as a character, as well as the stories he inhabits. Slott captures this perfectly in CLONE CONSPIRACY #2, where Peter is torn between upholding his pledge to not kill, using only necessary violence, and avenging what he believes to be the desecration of the memories of his loved one. For a time, the latter seems to be winning. This is a position we rarely see Peter in, seeing it written with Slott’s finesse was a treat!

One of this issue’s high points was most definitely the reunion of Spidey and Doc Ock. When Ock mockingly spat the line that quickly became his catchphrase as the Living Brain, I nearly lost it! In terms of plot, it speaks volumes about Slott’s writing that the reveal that multiple pages full of once-dead AMAZING SPIDER-MAN characters walk amongst the living once more is somehow the least surprising information provided to readers in CLONE CONSPIRACY #2. I’d like to get through this review without spoiling any intense twists for anyone, thus allowing them to get the same enjoyment out of this comic as I did. So let’s just say that fans of SPIDER-VERSE will have a lot of fun with this issue. 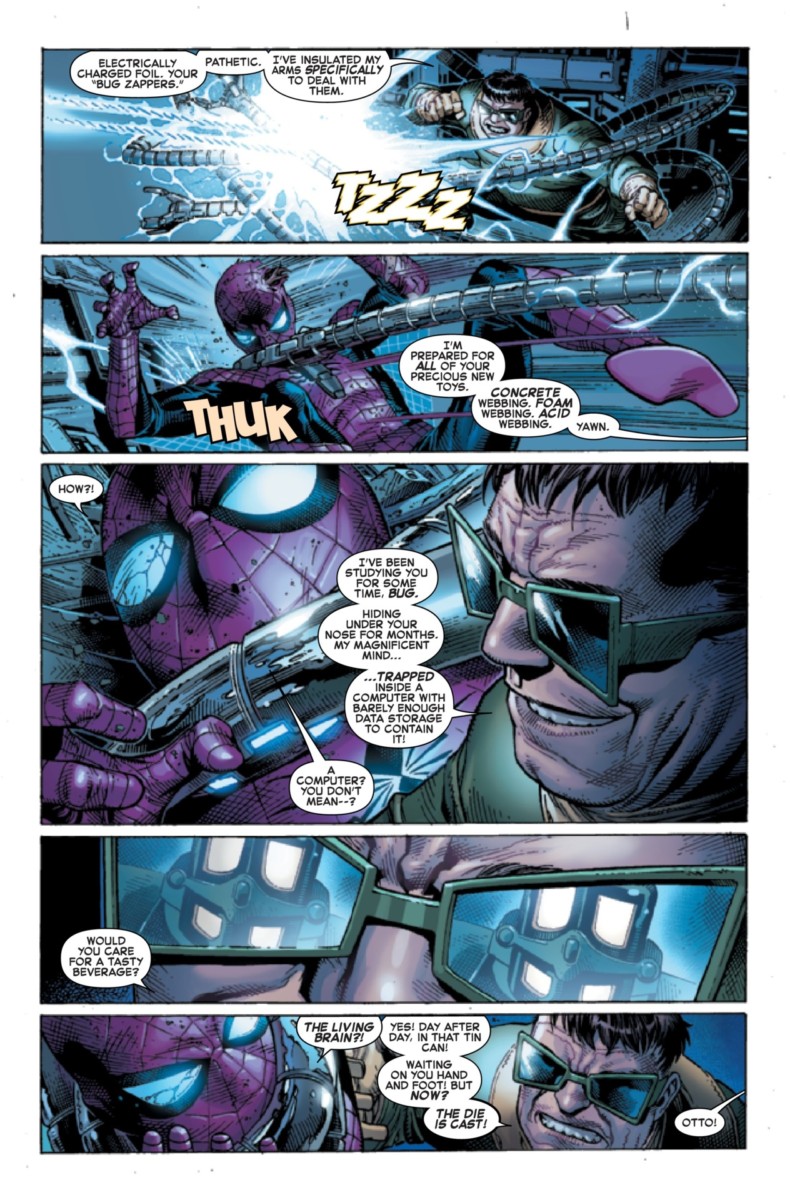 Artist Jim Cheung is given the opportunity to flaunt his artistic prowess in CLONE CONSPIRACY #2 through its multiple two-page spreads, which feature a large, varied cast of characters from Spidey’s past. Cheung’s figures continue to be his strong point. The eye is perpetually drawn to them, with little interference from his backgrounds, which are often stark- sometimes nonexistent. While I am a huge fan of the artistic style of the most recent run of AMAZING SPIDER-MAN, I believe that Cheung’s work is much more suited to the tone of CLONE CONSPIRACY. No complaints or criticism for Cheung here, especially after the phenomenal rendering of Spider-Man’s violent first reunion with Doc Ock!

Colorist Justin Ponsor forgoes the hyper-modern artistic tone we’ve seen in recent AMAZING SPIDER-MAN comics, opting instead for more muted colors. While Ponsor shadows heavily, in his shading, light colors are certainly a scarcity in this issue. Though this feels a bit odd, it most definitely works, both aesthetically and with the dark tone of CLONE CONSPIRACY. 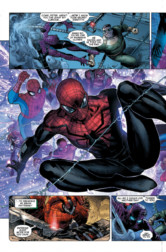 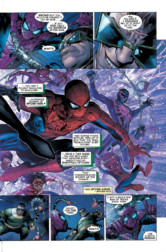 Many readers gloss over inkers in the industry, instead directing their admiration towards writers and artists, not realizing how integral inking is to the process of comic creation. CLONE CONSPIRACY #2 inker John Dell provides us with an endless stream of examples that illustrate how important inking is to the process. Through adept linework, Dell is able to bring Cheung’s artwork to life. Dell gives readers perspective in regards to lighting, and breathes motion into the figures, making fight scenes appear fluid, rather than stale and stagnant. I am certain that without Dell’s linework, the artwork of CLONE CONSPIRACY #2 would not pop as it does.

READ: Many readers view Spider-Man event, ONE MORE DAY as something that should never have occurred. Find out why!

Artistically, CLONE CONSPIRACY feels anachronistic in comparison to other AMAZING SPIDER-MAN comics in recent years. The combination of Cheung’s realistic figures, Dell’s moderately heavy inking, and Ponsor’s muted color pallette gives CLONE CONSPIRACY #2 a more retro vibe, as if they channeled the 1970s during production, which is fitting, given the resurrection of many of Spider-Man’s iconic baddies who made their mark on the title decades ago. As a whole, CLONE CONSPIRACY #2 is a phenomenal issue, even better than the last. This event is a must-read for any fan of Spider-Man. Don’t wait for the trade to come out. Go to your local comic store, and pick this up as soon as you can.