In spite of its flaws since CIVIL WAR II’s debut, the series maintains its knack for working with engaging themes worthy of discussion. The philosophical debate of security vs. due process and profiling individuals in the name of protecting civilians is prominent throughout both the main and side storylines, some of which draw parallels to our own modern-day political conflicts. Taking the themes that made the original CIVIL WAR comic stand out and remolding them for our current generation, CIVIL WAR II analyzes the concept of personal accountability and how it plays a bigger factor in our decisions and actions, both good and bad. A reflection of our current social media-dominated landscape, CIVIL WAR II argues that the removal of one’s accountability in the name of security, even if it is done in the name of protecting lies, amounts to nothing more than profiling individuals. 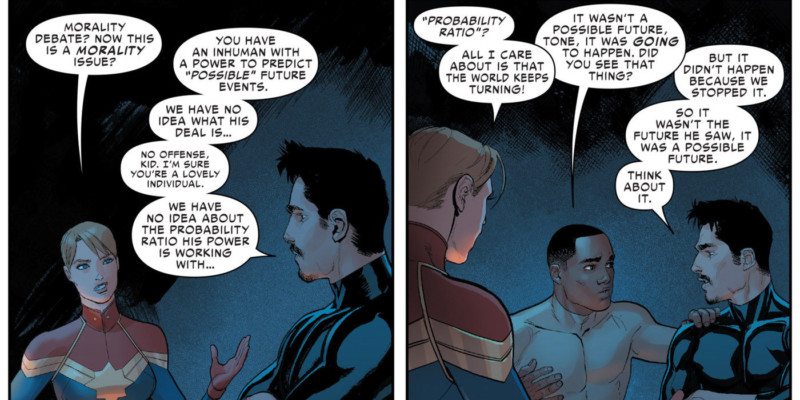 The original CIVIL WAR comic was something of an allegory to post-9/11 America, a time in which domestic terrorism and a need for national security began to overtake the personal freedoms and liberties that our country represented. The Superhuman Registration Act especially drew parallels to the Patriot Act signed during the Bush Administration, in which civil liberties were restricted in the name of combating terrorism and protecting the security of the American people.

That was the basis of the ideological conflict fought between Tony Stark and Steve Rogers: how much freedom are we as human beings willing to give up in order to feel safe? Even though the series devolved into a punching fest between two sides both acting like jerks, the themes that it brought up painted an accurate depiction of what we as a country were worried about back in 2006. The political allegories painted in both side’s stances reflected the fears of a country attacked on a scale that hadn’t been seen since Pearl Harbor. We were scared and looking for a fight to win, and any decision that the government made for quite a while, no matter how questionable, was accepted in the name of America’s safety and security.

CIVIL WAR II takes this topic of questionable ethics and security and re-imagines it for the 2010s, a time centered around technological advancements and social media. In this world we can see and hear about news events at unprecedented speeds, and more importantly we can discuss tragic matters with one another at the click of a button. Whether it’s a police shooting or a terrorist attack or even the recent presidential election, we see flaws in the world and demand that these flaws be rectified. But personal accountability doesn’t just apply to those who are reported guilty of committing atrocities; it also applies to us and our reactions toward the situations, our behaviors online dictating the way people see us in real life.

LISTEN: Check out our thoughts on the original CIVIL WAR: how it redefined the Marvel Universe

The plot of CIVIL WAR II, while somewhat messy, remains simple enough: the Avengers find themselves divided amongst one another when they discover Ulysses, an Inhuman who can experience visions of the future. Carol Danvers sees these visions as a gift, a means to stop crime and violence from ever happening and thus keep people safe. No one dies and the world doesn’t have to end, all because the bad guy never even got a chance to put their plan into action. In the other corner, Tony Stark is more skeptical of the moral cost of these visions, protesting the logic of stopping crimes before they actually happen. After all, how can you convict someone before they’ve committed the crime? 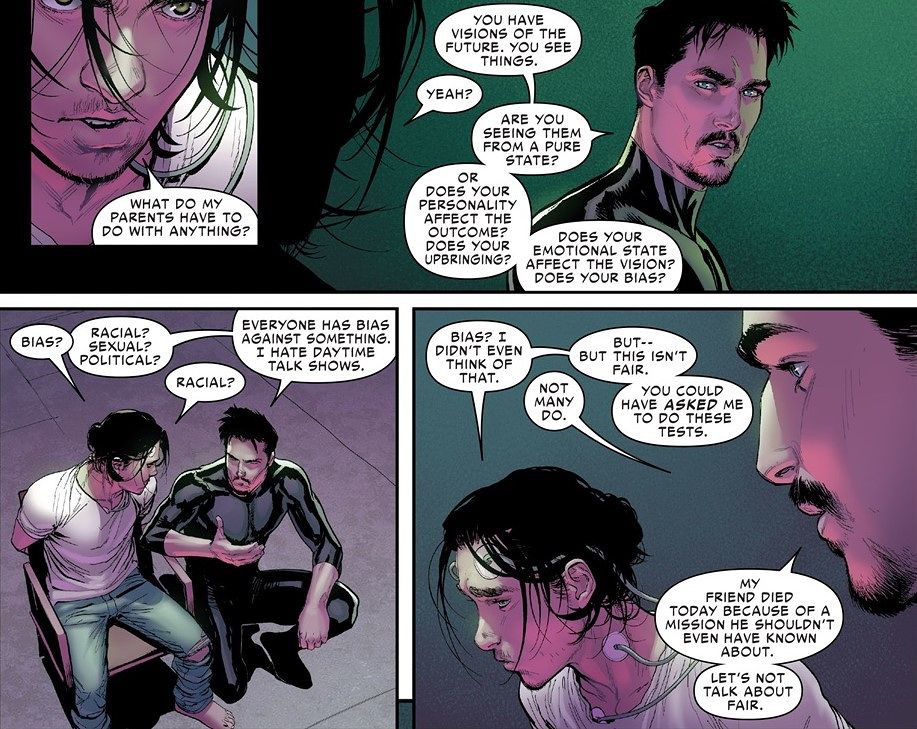 If you could predict a crime or murder that wouldn’t happen until the next day, is it legally and morally right to arrest the supposed criminal on charges that they are not guilty of yet? It’s a moral dilemma that weighs the points of freedom vs. security, which most people seem to forget are not necessarily the same thing. By definition, freedom refers to our ability and right to choose what we can say or do without fear of restraint or consequence; by comparison, security (both individual and national) refers to the protection of a state and its citizens in the face of national crises and threats, as well as the rights that classify a society as “free.” The freedom that CIVIL WAR II chooses to focus on in particular isn’t just our rights as individual beings, but our right to choose in general. By using these visions as not just evidence of the crime, but the final verdict, then where does personal accountability come into play? The short answer: it doesn’t.

The word that Tony uses to describe what Carol is doing with these visions, for lack of a better term, is profiling. It might be done with good intentions in order to single out future criminals, but in the end her faction is judging people on actions that they have not done yet. And with his big reveal that the visions can only see the algorithm for a possible future, rather than an absolute one, it all comes down to making decisions based around guesswork instead of fact.

This rise in profiling rides parallel to our country’s own rise in racial profiling, as well as our struggle to solve such a problem. From outrage over police shootings against unarmed African-Americans, to classifying all Muslims as potential suspects in an attempt to stop groups like ISIS, it all comes down to making generalizations about entire ethnic and racial communities. We would all like to assume that terrorists have some kind of profile unique to them alone, because that would make it easier to distinguish the good guys from the bad guys. Unfortunately, no such patterns or behavior trends exists, as you can’t profile an entire group based on the actions of a few people; from a moral standpoint, profiling individuals on such a feature is nothing more than scapegoating, which is bad and wrong. 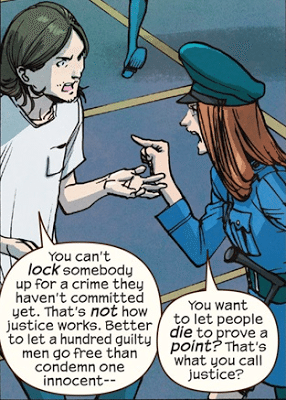 Oddly enough, the best representation of the moral dilemma discussed in CIVIL WAR II doesn’t even come from the main storyline, but rather the MS. MARVEL tie-in series. There’s even a panel in particular that sums up the entire thematic nature of this conflict, and presents a solid moral dilemma to back it up.

The crux of this story involves Kamala Khan being asked by Captain Marvel to head a team of young superheroes in order to stop crimes foreseen by Ulysses. And from the mind of a superhero fangirl like Kamala, this is something of a dream come true: work with your childhood idol and help save lives. However, Kamala gradually starts to grow skeptical of this stop-crimes-before-they-happen tactic, the lines of morality becoming even blurrier when her team apprehends her classmate Josh. He might have been tossing around the idea of starting a fire in the school without realizing the consequences of his actions (blowing up the school) but we don’t know if he was actually going to go through with the decision.

Regardless, Kamala’s team arrests Josh for this, what he might have done, rather than what he has done, literally profiling him as “Middle-class teenage white male, publicly expresses anger over rejection by a former girlfriend.” Not only does the inclusion of personal stakes shake Kamala out of her hero idolization to see a bigger picture, but it makes a strong case on both sides of the argument on stopping crimes before they happen. Maybe Josh would have set that fire or maybe he would have gotten cold feet, but now I suppose we will never know; Carol’s cadets declared him guilty without care for his own accountability in the crime.

READ: Learn more about Kamala’s moral dilemma in our review of MS. MARVEL #8

In many respects, CIVIL WAR II could be seen as a remastering of the original CIVIL WAR themes for the modern world, but in truth these themes of freedom versus security have always been present. CIVIL WAR II just takes these themes and expands the accountability of one’s actions not just to superheroes, but to ordinary citizens as well. In this new world, everything we say or do has an impact on the people around us, and resorting to profiling as a means of “protection” does not offer the safety it claims to promise. It strips accountability from entire ethnic, racial, and religious groups and labels them equally guilty as the harmful individuals. It doesn’t matter if such decisions can provide safety and security for our county, because from a moral standpoint it makes us no better than the criminals we claim to be fighting. Accountability is everything when it comes to consequences, and we cannot ignore such a valuable aspect for the sake of protection.