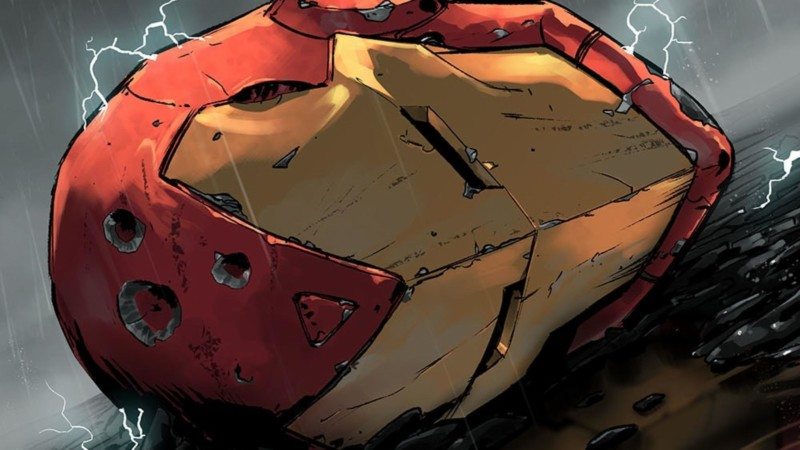 This is it. CIVIL WAR II #8 marks the end of the slightly forced matchup between Captain Marvel and Iron Man. What has been a bit of a lulled series certainly had a lot of ups, and CIVIL WAR II #7 made me very hopeful for this concluding issue. However, while David Marquez and Justin Ponsor’s artwork was as sharp and as stunning as ever, Brian Michael Bendis’ plot felt a bit rushed for a series that dragged on for so long. Even though the conclusion left me curious about what’s to come, I couldn’t help but feel that CIVIL WAR II #8, as a major crossover event, misses the mark. 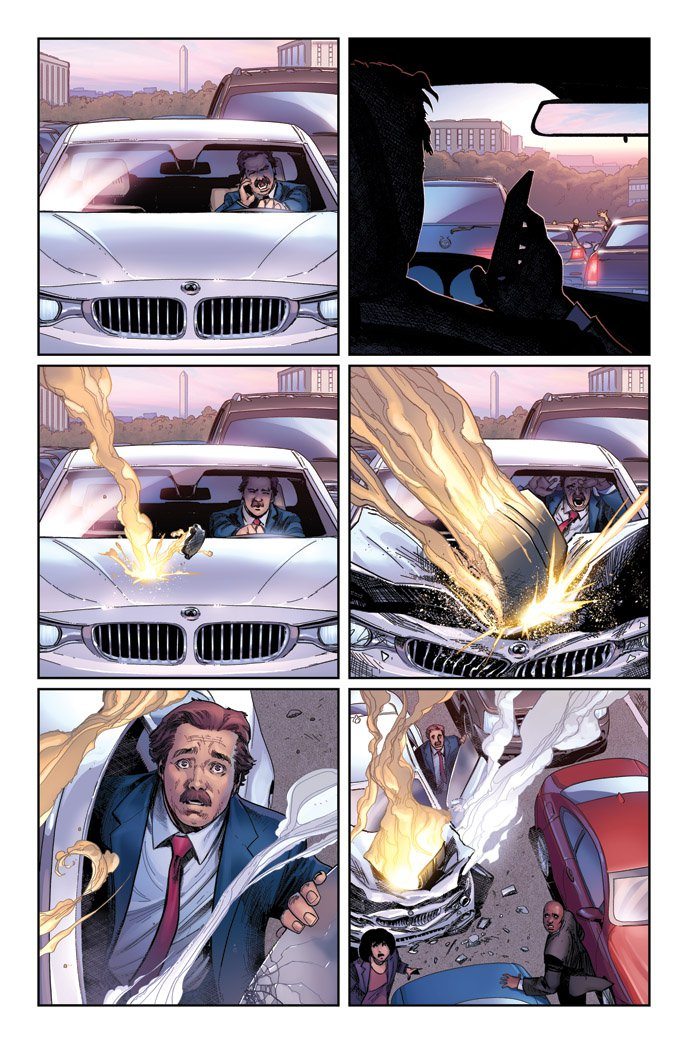 CIVIL WAR II #8 begins with a man getting out of his car and witnessing the battle between Captain Marvel and Iron Man in front of The United States Capitol. Captain Marvel and Iron Man come to major blows as they both fly into this encounter with nothing to lose. There is hardly any outside interference from other heroes, as Maria Hill prevents The Guardians of the Galaxy and The Ultimates from interfering. This battle takes up about half of the issue as Tony and Carol give it everything they have left in them.

READ: New to The Ultimates? Here’s why you should be reading THE ULTIMATES!

In the middle of the fight, Captain America takes a critical hit from a missed missile fired by Iron Man, yet the battle continues despite his terrible injuries. Soon Maria Hill orders the fight to be stopped, allowing heroic teams to fly towards the mayhem. The Inhumans also teleport to Washington in order to deliver apparent news about Ulysses’ visions. Eventually, Captain Marvel lands a final punch on Iron Man, and Tony Stark is flung out of the suit. The heroes who have arrived witness this concluding hit, but are all encompassed in a dreamlike arena as they attempt to aid Tony Stark. In this hazy atmosphere, Ulysses explains to the heroes that he is showing them an array of dystopian futures. Without going too deeply into major spoilers, Ulysses transcends after these visions as he is beckoned into the Marvel cosmos. The fallout of everything from this battle comes about immediately after. 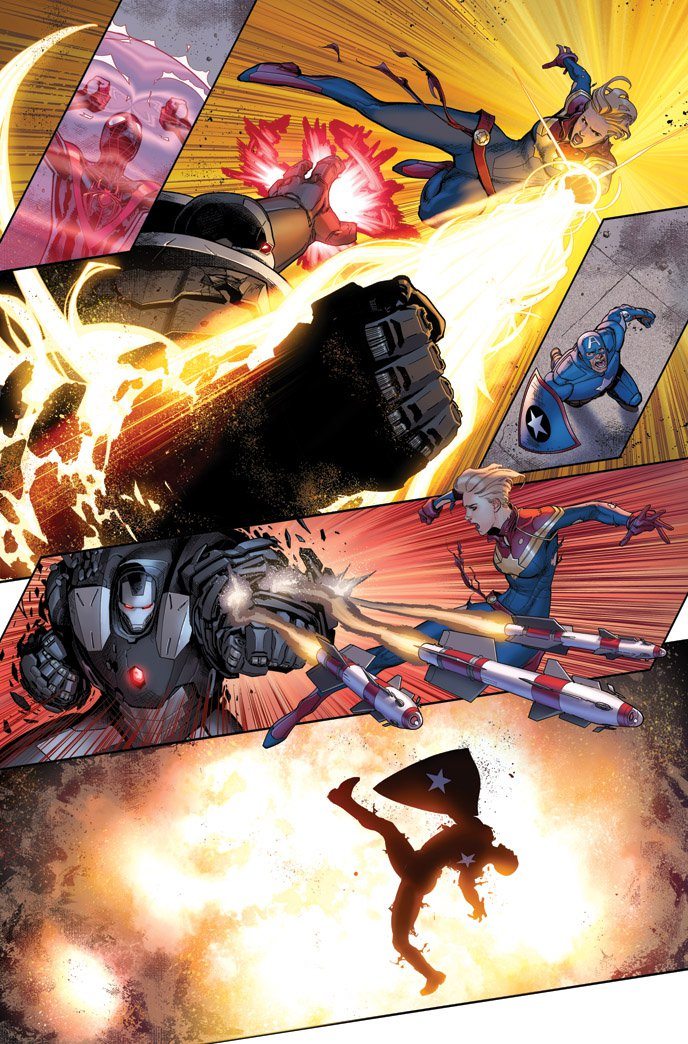 After reading CIVIL WAR II #8, I find it all to be a bit rushed. What’s funny is that as a whole I thought the series was much too long. In this issue, however, it feels like Bendis attempts to cram his climactic conclusion in just a few panels. His delivery falls short, and I think a major reason for this is because it is also so unbelievable. One of the biggest flaws of the original CIVIL WAR series by Mark Millar was the sudden and forced fallout between Tony Stark and Steve Rogers. Here, we see a similar disparity between Carol and Tony, but the major difference is the ending fight. Steve didn’t deliver a fatal punch on Tony; Carol did. While I don’t think the result is all too terrible (INFAMOUS IRON MAN is a great series thus far), I find it ludicrous and forced that Carol would lose her cool like this over an issue she is admittedly torn about herself. I just think it could have been more believable and compelling if this was drawn out for a few years, similar to what made the SECRET INVASION crossover so fascinating. Having heroes divide and fight is a delicate scenario. It often has characters with rich histories acting out of character while forcing tension amongst heroes who have previously gotten along together so well. I think more compelling reasons in a divide isn’t too much to ask for.

However, I do commend Bendis for his attempt at making profiling a prevalent issue in comics. I thought it was a bit forced at times, but it is, in fact, something that is extremely relatable in America today, so it’s refreshing to see this in the medium. The parallel Bendis draws between profiling citizens for potential crimes and profiling them based on race is a solid analogy. At times in this series, we’ve had characters such as Tony Stark, Spider-Man, and Luke Cage call on this comparison and point out how statistics can never justify assuming the potential bad habits of an individual. Marvel did a good job of including many heroes within the main CIVIL WAR II series, and with profiling as the main topic, that’s extremely important.

READ: Have you heard of INFAMOUS IRON MAN? Read our review of issue #1!

The art is something that did save the series for me. It was aesthetically stunning as a whole, and this issue, in particular, allows David Marquez and Ponsor to really shine. The fine detail that Marquez uses for his characters’ facial expressions and costumes really brings them to life. He has proven himself as an artist since working with Bendis on ULTIMATE SPIDER-MAN, and being able to work well on such an epic title only signifies his ability to draw with the best. But Justin Ponsor’s colors make these drawings pop with energy. You can almost see the energy around these heroes as they smash each other, and much of that is due to the clear and sharp coloring implemented by Ponsor. Additionally, if you were a fan of Andreas Sorrentino’s guest appearance in last month’s issue, you’ll be pleased to see the addition of seven artists (including Adam Kubert) for the major vision sequence. 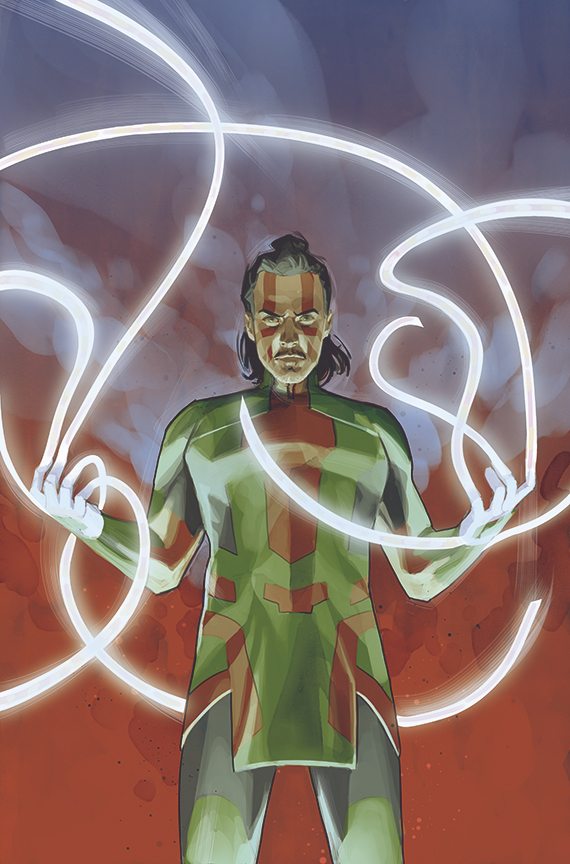 Overall, I find CIVIL WAR II #8 to be average. I don’t want to say disappointing because the series as a whole provides the Marvel Universe with many opportunities for the future. It makes the Inhumans very relevant to someone like me who hasn’t been reading a series like UNCANNY INHUMANS. I also find portraying Carol Danvers as such an important and powerful diplomatic figure is important. Carol has proven to be such a powerful feminist icon in her personal series, so this is only a rightful and intelligent progression for her. And, from a monetary standpoint, having her go toe-to-toe with someone like Tony Stark has only made her more relevant for the upcoming Avengers movies. But for all the good this series had, it simply dragged on much too long. It could have easily been shorter, and the mediocrity of this eighth and final issue proves just that. Summer blockbusters like this have been a complaint for the past decade, but perhaps last year’s SECRET WARS made me forget how hit or miss they really could be.