Maybe it’s the inner comic book fan talking, but there’s something ridiculously fun about watching superheroes duke it out with one another. And if I were to rank CIVIL WAR II #5 as nothing but an all-out superhero battle royale, it’d be a rousing success. In that category, it’s as fun as hell. Unfortunately, the issue suffers from failing to integrate the philosophical ideologies of the CIVIL WAR II conflict into the fight itself. True, the artwork is still great and it does channel the same level of popcorn-movie fun that we got out of CAPTAIN AMERICA: CIVIL WAR, but what it lacks is substance for the story to progress. And by the fifth issue, you’d expect Bendis and Ramirez to have this aspect of the series covered. 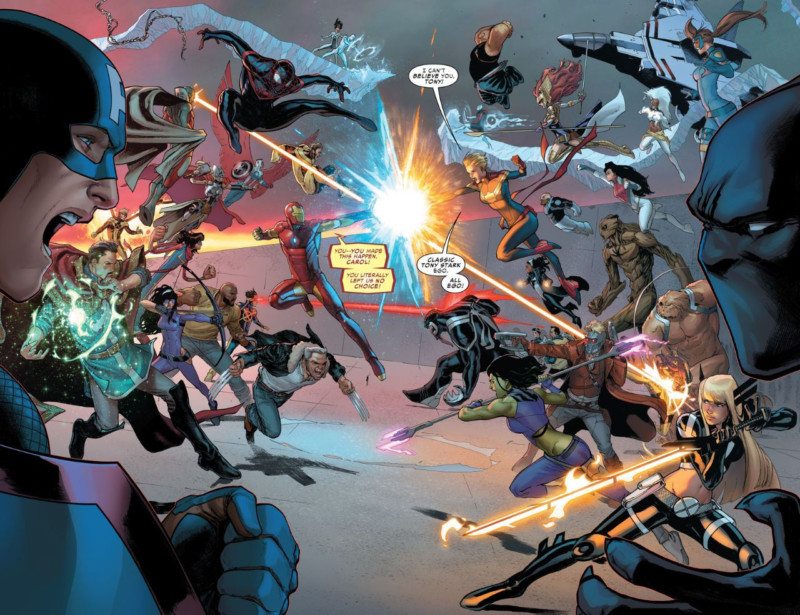 There isn’t really much to this episode in terms of story context, but there is plenty of action. Picking up from the last issue, Tony and his team have confronted Team Carol over her latest misuse of Ulysses’ powers, thus resulting in a beat-em-up fest with the Triskelion as a battleground. On Tony’s side of anti-precog are the Avengers and All-New X-Men; backing Carol up are the Inhumans, Guardians of the Galaxy, Alpha Flight and Extraordinary X-Men. In a metaphorical sense, this is a battle of old versus new over the future of the world; not that anyone would be paying attention to the subtle metaphors. After all, this issue is non-stop action and chaos, with heroes pitted against heroes in a battle of punches, energy blasts, and explosions. In other words: light on the storytelling but heavy on the fun. 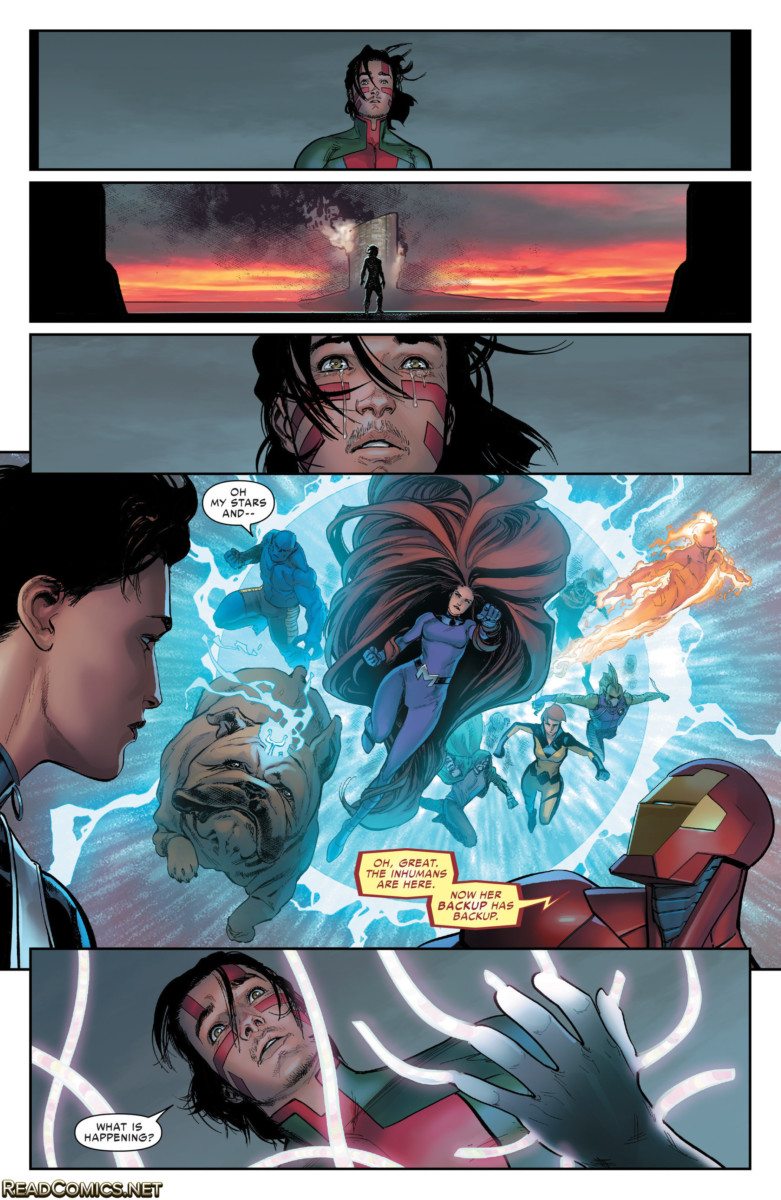 This story can be seen as either very awesome or very tedious, both of which are due to the nature of its storyline. On one hand, this issue is a ton of fun to watch, giving us the superhero fight we had been asking for and evoking that same feeling of giddiness you got from the airport scene in CAPTAIN AMERICA: CIVIL WAR. There’s a balance of quips and serious dialogue, lots of character interaction and a good amount of action to satisfy your average comic book reader. However, this action still needs to tie back into the story and themes of CIVIL WAR II, which is where the issue shows its cracks. Despite its rather flawed execution, the original CIVIL WAR knew how to balance out its action sequences with its story-based examination of freedom vs. security. Here though, the fighting is the result of a series of bad decisions by both parties, with little to back up their motivations. It’s action for the sake of the plot, which is good, but raises the question as to why they are fighting in the first place?

There’s also the glaring issue of the depiction of Carol Danvers in this series, in that she is getting pushed more and more into “obvious villain” territory. The point of a story titled CIVIL WAR is to create a scenario where the line between right and wrong feels rather uncertain, and to do so, each side should have a compelling case. There needs to be a clear argument as to why each team leader chooses to believe in a certain argument, but in a manner that feels in-character to the audience. Granted, this story does a marginally better job than its predecessor, in which Captain America and Iron Man both felt out of character, but it doesn’t change the fact that Tony is being painted in the right here. Carol’s actions in the main storyline feel rather desperate, as if she’s currently in denial that her argument is losing merit with the other side and readers. This doesn’t make for the best storytelling, and considering the decision that she makes at the end of this issue, it just seems to keep on going. 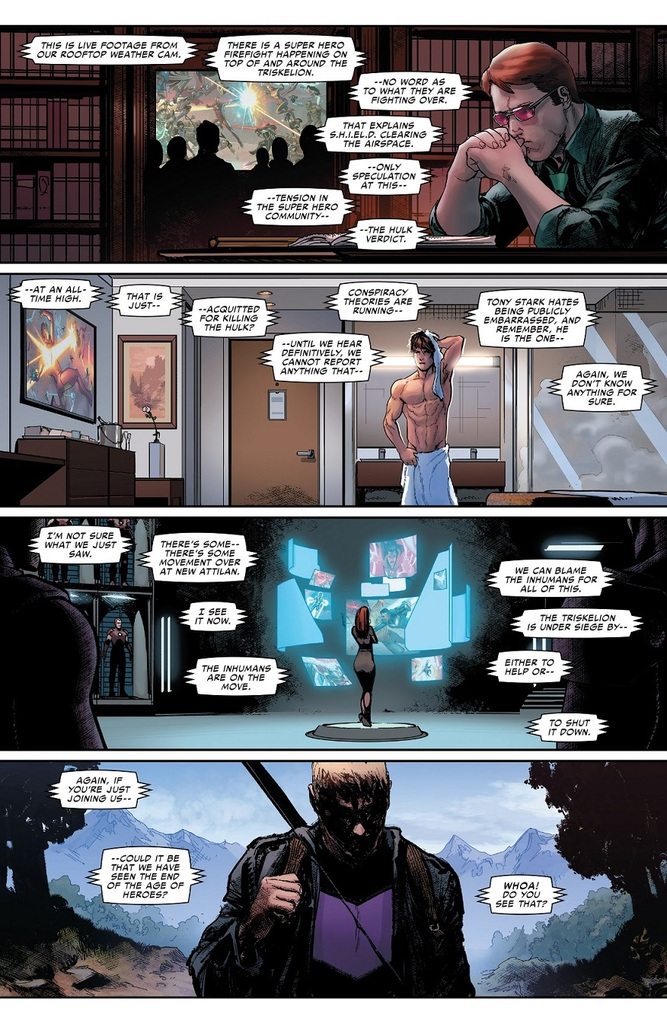 Art-wise, CIVIL WAR II continues to deliver, and it definitely makes up for the problems in its story. Once more, David Marquez delivers some solid illustrations that really add to the details of this fight, starting off with an awesome-looking two-panel image of our teams squaring off against one another. From airborne battles to pieces of armor and uniform being blasted off to the facial feature designs; it all looks detailed. Not photo-realistic, but three-dimensional enough to offer a sense of depth to the combat on-panel. The lighting is also impressive, with the color slowly getting dimmer and dimmer as the sun sets over our heroes’ battle, capping off with a grimy-looking apocalyptic vision covered in darkness. It’s a proper representation of how the fight has progressed from awesome-looking to devastating for our heroes. One thing’s for sure: There are definitely going to be consequences when this series is over.

CIVIL WAR II #5 is an action-packed comic by stand-alone terms, but as a part of the main story narrative it’s a mixed bag. The fighting still lacks weight and plot-wise doesn’t do much to contribute to the protection versus profiling dilemma that the series praised itself for being. The artwork definitely helps deliver on the concept of a fun CIVIL WAR fight sequence, but with only two episodes left in the series I’m still not sure where it’s going as a story. Make of that what you will, whether it be positive or negative.