Keiichi Arawi’s back at it again in CITY Vol. 2! Even more oddball characters join the growing metropolis in this totally absurdist comedy.

If you’re not already familiar with CITY or any of Arawi’s other works, get ready for a wild, weird ride! As the name implies, CITY takes place in a city and follows the daily life of Midori Nagumo. A handful of short chapters in each volume chronicle her struggles at her restaurant job, where she works to repay a debt to her landlady. Some chapters turn their attention to other characters, like Midori’s best friend, Ayumu, or Wako Izumi, an eccentric photographer.

This second volume of CITY starts with a bang. Midori takes off running from the apartment and somersaults over a manga artist to avoid crashing into him. Wako, who was featured briefly in the previous volume, happens to catch her stunt on camera and marvels at the photo, setting the stage for the rest of the volume.

While CITY has no clear-cut plot, per se, both volumes open in a similar fashion. One of Midori’s ridiculous stunts causes a chain of reactions throughout the following chapters. Wako’s photo, and photography in general, is the theme for this volume. Midori attempts to pay rent by entering in a photo contest, but none of her photos seem to work. (Honestly, Midori, you should be used to this. All of your efforts to pay rent and avoid work wind up being more work for you in the long run!) Wako, feeling inspired by Midori’s flip, vows to find her and photograph her again. And Ayumu reminisces about how she and Midori first met, which, ironically, was through photography. 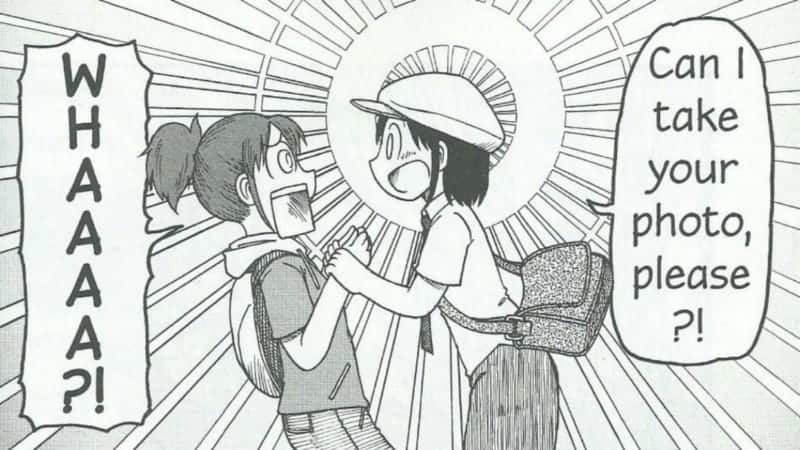 Wako’s quest to photograph Midori a second time leads her to the college Ayumu and Midori both attend. Ayumu meets Wako, realizes that she’s a photographer she admires, and begs Wako to take her on as an apprentice. The volume wraps up nicely with Midori running into them both and Wako asking to take her photo. Ayumu learns from Wako’s example and photographs Midori arguing with Wako. The manga comes full circle with Midori as the subject of everyone’s photos — just one more example of her actions tying everyone together, making such a large city feel like a small town.

With Ayumu’s trip down memory lane, we finally get a glimpse at Midori’s past. Ayumu first met Midori when she took a photo of her during a tennis match. Midori made a name for herself by pummeling every sports team at the school, despite never actually being a member of any of them. Though it’s completely expected, it’s nice to see that Midori has always been a rambunctious spitfire. It adds some depth to Midori’s character to see that she isn’t completely lazy and can’t resist a challenge.

We also find out in this volume that somehow, despite her terrible luck with money, Midori always pays Ayumu back for her loans. Ayumu is saving up for a camera, which is why she’s reluctant to loan Midori money. However, Ayumu admits that she trusts Midori and knows that she’s responsible enough to pay her back. It’s a small interaction, but it adds perspective on their relationship and Midori’s character. So she’s not a total goofball, after all. 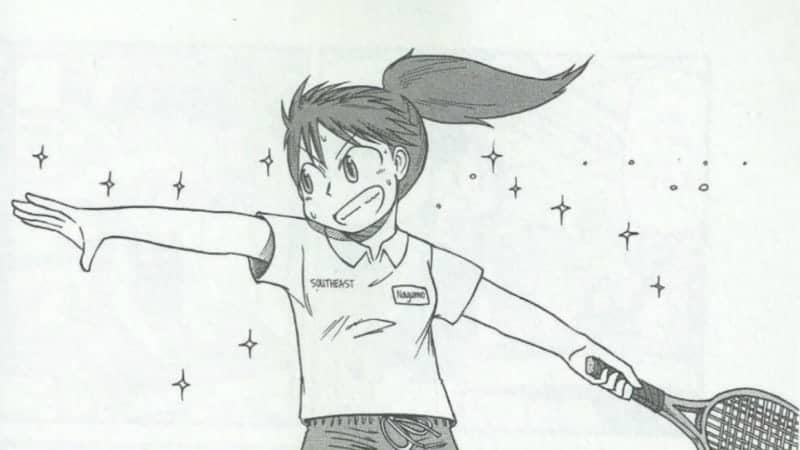 Speaking of goofballs, Wako Izumi takes the stage this issue. Wako becomes one of volume two’s stars through her tireless quest to photograph Midori. She finally meets Midori face-to-face near the end. With Wako’s bubbly personality and Midori’s rashness, these two characters contrast perfectly. In a way, Wako and Midori foil each other. Midori rushes through life impulsively and almost every idea she executes fails hilariously. On the other hand, Wako coasts through the day cheerily and sees even the smallest things in life as a gift. Their interactions and bold dynamics add life to CITY, especially given how frustrated Midori gets with Wako’s carefree attitude.

MY HERO ACADEMIA Class 1-A: Ranked

Volume two shifts its focus to Wako. With Wako at the center of attention, CITY embraces a whimsical, lighthearted humor. Her innocent and easygoing personality creates wacky and imaginative scenarios, like the game show she starts at Ayumu’s college.

In addition to Wako becoming more relevant this volume, CITY also introduces two new supporting characters, each with one short chapter focusing on them. The first is Riko, Wako’s sleepy younger sister. Her struggles to stay awake and alert in class are unreal. Her classmates make it a competition to see who can help her answer questions in class, and even the teacher is in on the game! Another new character, Ecchan, is introduced by Matsuri, the landlady’s granddaughter. Matsuri and Ecchan bring forth an adorable, childish comedy with their imaginative little skits during their walk home. 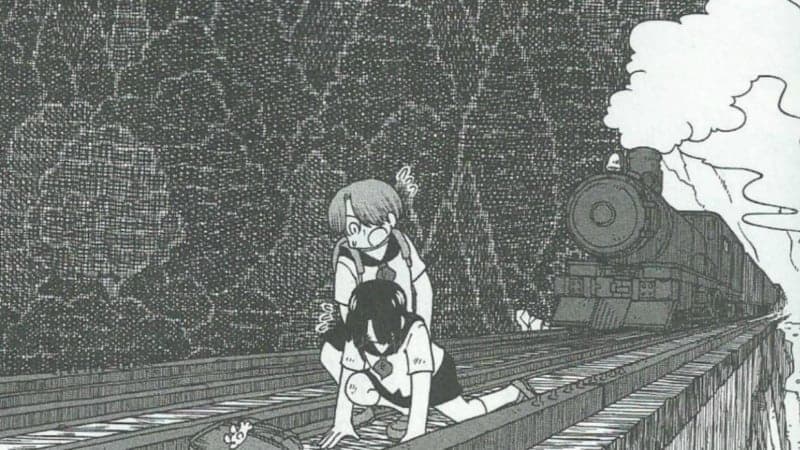 CITY seems to want to expand with even more characters instead of focusing on a few main characters. It’s ambitious, and frankly, a little worrisome. Will CITY really be able to pull off a large cast of characters without making any of them seem bland or trope-y? It’s too early in the series to tell, but given the amount of attention given to Wako in this volume, I have hope that Arawi will continue developing his characters.

Fading into the Background

However, while Wako and Midori both feel more fleshed out in this volume, some other characters remain static. The humor surrounding the landlady’s son and grandkids becomes a little repetitive. The grandson, Tatewaku, always winds up in some unfortunate situation, like getting stuck in a mascot costume with a broken zipper. It’s amusing to a point, but seeing Tatewaku turn into the butt of every joke gets a little old.

Additionally, some side characters fade into the background more. Wako and Ayumu both appear in several chapters alongside Midori, but the other supporting characters appear in only two chapters each, at most. Some characters from the first volume, like the local cop, do make short cameos, but others are completely absent. While it’s understandable that not every character can make an appearance in each issue, it still feels like something is missing. Perhaps those characters could fill the gap if they had been developed more in this issue. For one, the creepy old man who watches the city through hidden cameras isn’t mentioned in this volume at all. He’s mysterious and shady, and he seems like he could become an important plot element in future volumes. However, since we know so little about him, his absence makes him feel completely forgotten as volume two shifts its focus to newer characters.

Get Your Feels on with These 5 Emotional Anime

The art in CITY continues to please with its simple, cartoonish style. It’s lighthearted, loose, easy on the eyes, and fits in perfectly with the humor. The simplicity of the characters’ design contrasts directly with the ridiculous gags and stunts they pull, creating an even bigger sense of amusement.

Even though the style is unassuming, the skill of the artist really shows. The action scenes, particularly the ones starring Midori’s landlady, show a mastery of artistry and comedic timing. Arawi knows exactly how to time panels (like the landlady’s street brawls) so they have the best comedic impact on the reader. Arawi also gives great attention to detail in his minor visual gags that you sometimes have to squint to see, like words on t-shirts and signs. He shows dedication in adding those tiny details to really bring out the manga’s sense of humor. 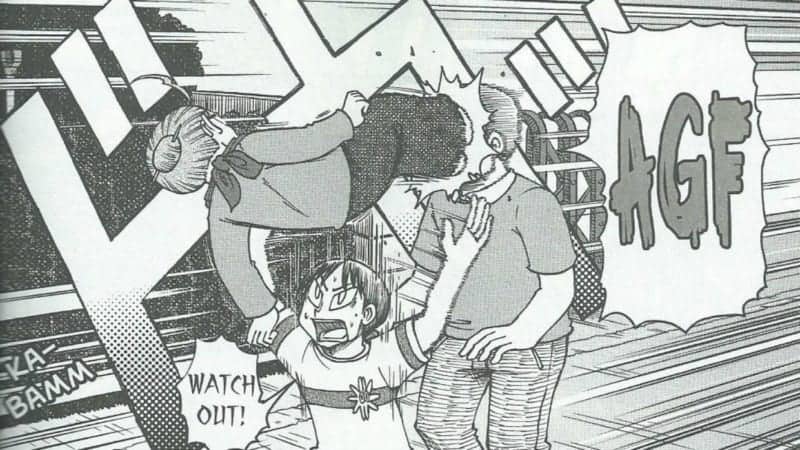 No one messes with a landlady on a mission for rent. | Image: Vertical Comics

However, the artwork isn’t as expressive as it could have been. In the previous volume, characters like the landlady or Ayumu made outlandish facial expressions. These expressions were totally out of place with the rest of the manga and really made the characters pop. They showcased Arawi’s skill and added yet another dash of humor. Unfortunately, volume two lacks that extra flair of expression that volume one had. There just aren’t any crazy shifts in art style or tone in this issue. That said, the manga certainly hasn’t declined in its artistic quality. There’s still an astounding attention to detail in the background and an excellent use of textures and shading during the action scenes. The art in volume two is still great, but just not as adventurous as it could have been.

CITY’s second volume has a few hiccups. The art seems tentative with its dynamics and some of the returning supporting characters lose a little luster. Midori’s landlady only makes one appearance, leaving a desire for more of her action-packed street brawls. Finally, some of the supporting cast don’t even make an appearance in this issue.

That said, Arawi made a good decision in shifting CITY’s focus to newer characters. Since the first volume, I’ve been looking forward to seeing the cast expand. The new characters in volume two don’t disappoint. Riko is delightfully ditzy and her classmates’ attempts to help her is one of the funniest moments this volume. Matsuri and Ecchan, with their cute adventures, add to that whimsical element Wako brings with her own antics. And even though some older characters are missed this volume, it builds excitement for the next installment. Now I really want to know what the heck is up with that creepy old guy with the cameras, and I’m definitely excited to see more about the cop.

In addition to seeing more of the side characters, I’m eager to see how Arawi develops the main cast. Midori, Wako, and Ayumu all received some development this volume, and I’m looking forward to more. With so many characters and personalities blending together, CITY has the potential to become something completely outrageous. The manga is already a weird, joyfully cute comedy, but as more characters interact, CITY’s humor is bound to become even more enjoyable.

Despite its hiccups, volume two meets some expectations and puts more in place. The fun new characters added character development and the contrast between Wako and Midori balance out the hiccups nicely. Volume two has its ups and downs, and while it’s not particularly groundbreaking, it’s still a fun read.