This year marks the 40th anniversary since the release of the original STAR WARS film on May 25th, 1977. This month, writers at ComicsVerse will be bringing you our insights on all things STAR WARS as we look at where the series has been and where it will take us next in the galaxy far, far away…

“I find your lack of faith disturbing” –Darth Vader

White smoke fills the Tantive IV as Imperial Troops storm the rebel blockade runner. Crimson blaster fire shoots out towards rebel forces. Chaos and destruction are clearing the path for their leader. The occult blackened figure emerging through the smoke is none other than Darth Vader.

Vader is a technological threat standing six feet tall in his signature solid black suit, menacing helmet, and pulsed breathing. Inspecting the dead as he walks by, Vader sends commands out to his troops. Moments later he is choking out a rebel officer to get information on the missing Death Star plans. The Dark Lord of the Sith left his mark in cinema in just a few moments. The Galaxy hid in terror, but why?

For some, this was the peak of Vader’s awe-inspiring character introduction. To me, it just fell flat. I never had faith in Vader in any of the films. I just was never impressed by him, and my lack of faith may be disturbing to audiences. To science-fiction fans, Darth Vader has been considered to be the most powerful and evil bad guy in history.

For forty years, Vader has held this mantel in the geek world. Growing up loving the films, I just never understood who made this decision. I never saw the Darth as intimidating. I do admit; he has the dark lord look and the god-like voice. Overall, I just never found Vader very intimidating, or maybe it just looks better on paper.

Who’s The Evilest Of Them All?

In 2015, Marvel brought back the STAR WARS comics. Being a fan of STAR WARS, I tore through Kieron Gillen’s run of DARTH VADER. It was evident to me that the Darth Vader in the comics is what the cinematic universe needs. With this in mind, let’s flashback to Vader throughout the STAR WARS films:

Beginning with A NEW HOPE, we get the first glimpse of the dark side. Vader used the Force to choke out Admiral Motti for his presumptuous remarks about the Force. Admittedly, Vader is off to a good start to this evil bad guy thing. Sadly, this is where that good feeling turns around. We see Vader’s lightsaber skills put to the test with “Ben” Kenobi, his former master. A weak and short (and slow) clash of blades ends with Kenobi being struck down to become more powerful than Vader could imagine. Let’s skip ahead to the next heart racing scene of Vader in his Starfighter. Moments later, he’s spinning off-screen due to a Tie-Fighter bumping into his ship. Astonishing pilot skills there, Darth.

In brief, during THE EMPIRE STRIKES BACK Vader’s role is summed up with constant brooding, giving demands, hosting dinner, and taking on the dad role. And is RETURN OF THE JEDI much different than that? Just looking back at these films, I think I have some reason to be unimpressed.

Vader did have his 30-seconds of glory towards the end of ROGUE ONE. However, this one scene does not negate the fact that he eventually broke his chains and tossed the Emperor down an elevator shaft while being electrocuted. Given his eventual turn to the light, labeling Darth as the ultimate evil might still be a little bit of a stretch even taking his ROGUE ONE performance into account. Besides brooding and getting his hands dirty in office meetings has Vader actually done anything?

I think we may have jumped the gun when it comes to naming Vader as the biggest bad guy in bad guy history. So, in his defense, I sought out to learn why he should be given the title. I dove into Kieron Gillen’s Marvel run to see how worthy Vader could be. The series proved why the Vader we get in the comics is the Vader we need on the big screen.

In DARTH VADER #1, Vader is blasting his way through Jabba’s Palace. We next see Vader Force-choking Jabba after destroying half of his guards. He then hires the infamous Boba Fett and Wookie Black Krrsantan. To top all that it ends with Vader standing over a destroyed Tusken Raider Camp. What a perfect note to prep us for the rest of the series. Also, notably shown is the Emperor controlling him, openly angry over the Death Star getting blown up by a bunch of teenagers. The tension and secrets between Vader and his master start rising and become the backbone of the series, which isn’t prominent in the films. 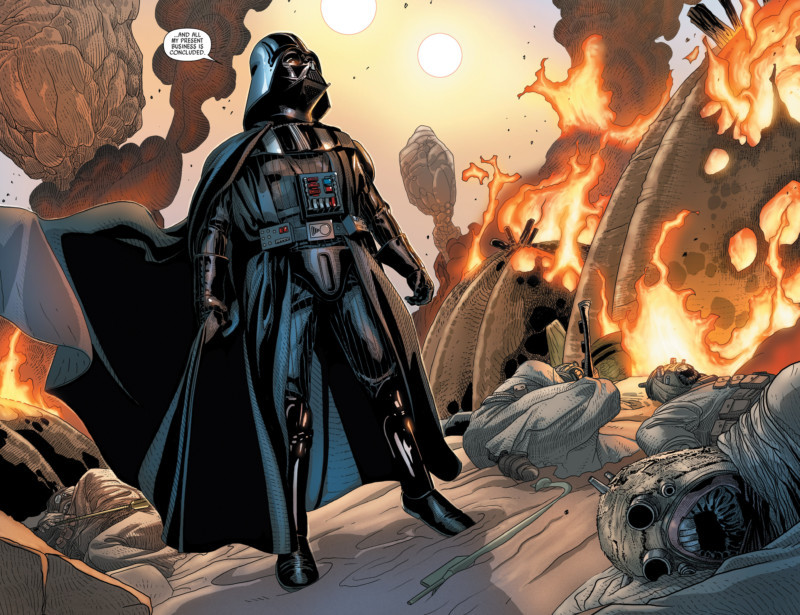 In Gillen’s series, we see the wrath of Vader, and how attached to the past he still is. Most of all, Gillen gives us a dark evil character that has his own plans and secrets to be revealed and acted upon. Vader is intimidating from the very start of the book, and this pace never slows down. Gillen embellishes on these factors more and more.

READ: Check out some of VADER DOWN in this preview!

The films claim that Luke’s father was the best star pilot in the galaxy. Again, cinematically we don’t get a look at this side of Vader in the original series except for literally getting bumped off the screen. We should applaud Kieron Gillen for giving him some epic moments in his run. Two of my favorite battles are in DARTH VADER #2 and VADER DOWN #1. Vader took down a cruiser effortlessly and showed no mercy against the wave of X-Wings. Vader took his signature ship out a few times in the 25-issue run, showing that Anakin never lost some of those flying skills.

How great would it be to see Vader use the Force while taking on a squadron of X-Wings, causing ships to collide into each other? Audiences would rave over an epic space battle involving the Dark Lord of the Sith. After all, who would want to mess with a guy that can destroy you on the ground and in space? 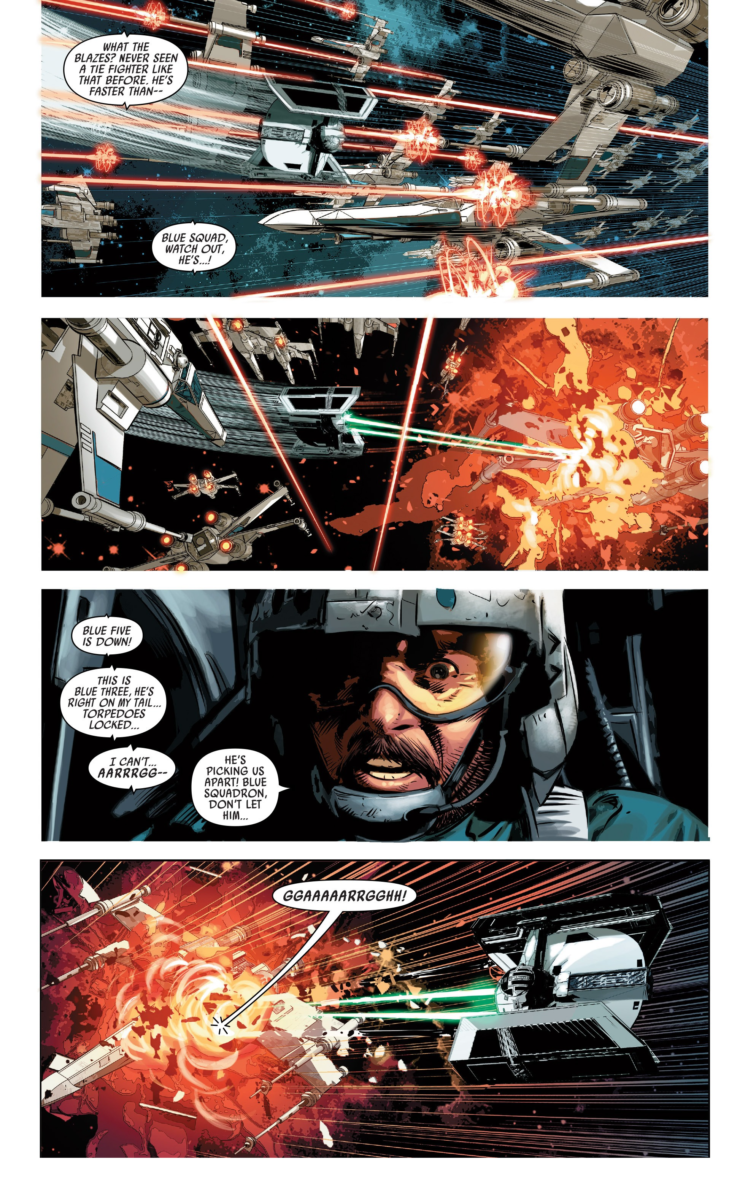 One other impressive thing we see in the comics is Vader taking on things himself, going behind backs, and taking on mission after mission. Nothing seemed to be too big or small of a task for Vader to handle, and he was always chasing something or someone down. It not only kept the story flowing but enriched the dark lord’s development as a character. The smaller side missions are what kept me curious on how Vader would handle things. Seeing him dive into different worlds and take on anyone or anything is something we never saw in the movies. Being heavily guarded at all times, hidden in a spacecraft or some bunker doesn’t hint that he could do any dirty work himself.

Even recruiting a secret team in this series was interesting because Vader is hardly a team player. However, adding Doctor Alpha and a killer spin on classic droid duos was intriguing and helped round him as a character. Doctor Alpha is the kickass female lead in the DARTH VADER series, always ready to prove herself to Vader no matter what the cost. Her spin-off droids of adorable R2 and pleasant 3PO are replaced with death wielding BEETEE and Triple-0. They were great additions, opening new doors for Vader as a character and his resourcefulness when finding reliable companions.

When else do we see Vader interact with anyone but Stormtroopers or the Emperor in the films? If he went down and battled his way through Hoth, or landed on Endor to fight his way past rebels, maybe we would have had an intimidating villain. All that’s shown in the films is that he is a conflicted monstrosity working for the Empire.

Throughout the entire run of DARTH VADER, Gillen kept raising questions that were focused around his trust in others, which seemed to be a theme within all five storylines. The comics kept me thinking and asking questions about Vader, unlike the predictable moments in the films.

Overall, looking at the films and comics, there was always a depth to Vader due to his relationships in the past and current. In the prequel films, Anakin and Padme were so in love that they defied the Jedi Council’s rules against such emotions and relationships. He grew up with only his mother whom he lost when Tuskin Raiders enslaved her just a few years later.

That loss is what triggered Vader’s anger toward the universe. Obi-Wan and the Jedi Council always treated Anakin as a child. Instead of encouraging the growth and digging deeper into Anakin, they held him back with restrictions. Similarly, another turning point for Vader was not moving him up to the rank of Master when added to the Council. This was something that was unheard of in Jedi history and made him feel looked down upon.

At the end of the prequels, the Emperor manipulated Vader from the start when turning him to the dark side, lying to him about the death of his beloved Padme. The Emperor was no different with Vader as previous masters were when it came to belittling and treating him like a child. Vader never got the chance to grow up and become his own person. In issue #24 we get an amazing view of Vader’s inner demons of the past, and his dismissal of his former self Anakin. In a few moments, he mentally relives the final battle with Obi-Wan on Mustafar and the death of Padme. An essential point in the building of Vader’s own being, finally for the first time we have him accept and embrace what he has become.

Watching the films provides us with only a small perspective on these attributes of Vader. In the comics, not only are these further explained, but we learn more about him and his wrath. The comics give us a character all will fear. His flashbacks of before he became a mechanical monster provide us with a clarity that a man is still there and still has buried emotions.

The loss of Padme will always haunt him. He will always be broken by the tragic death of his mother. Now Vader has become cold and hateful. His armor and mechanical body reflect this anger and pain. Kieron Gillen gave us a Vader we need to understand this depth. Hopefully, we do get a spin-off movie to finally define the Dark Lord of the Sith, Darth Vader.