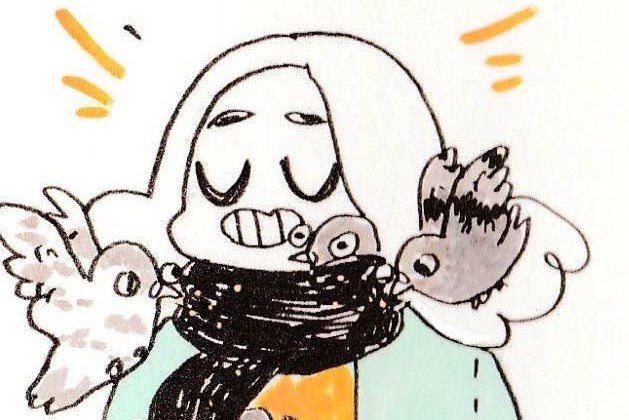 ComicsVerse is a platform to expose new uprising talent, so reaching out to British webcomic artist Chuckdrawsthings seemed like a no-brainer. We also have a quirky oddity in common: pigeons. For us, they just have infiltrated the ComicsVerse office and even tried to nest in an ashtray. For Chuckdrawsthings, her pigeon cartoon is a lovable caricature used to make relatable pieces that can both pull at the heart and produce giggles.

Her simple layouts with thought-provoking messages on mental illness, allow like-minded individuals to feel a connection and perhaps a small relief in knowing their similar feelings aren’t so abominable. The importance of this can not be understated. Art is a wonderful tool to helping people understand each other. There’s a comfortability in her comics and we are proud to showcase them and talk to her about her work.

Birth of the Pigeons: Starting Out

ComicsVerse (CV): What got you into drawing and how did pigeons get involved? Do they represent or embody anything to you?

Chuckdrawsthings (Chuck): I’ve been drawing for as long as I remember – when I was younger, I lived with my grandmother for a while, and I didn’t really watch TV or play video games until much later in life, so I’d just do it to pass the time and it grew into a hobby!

Pigeons got involved after I drew this particular comic… 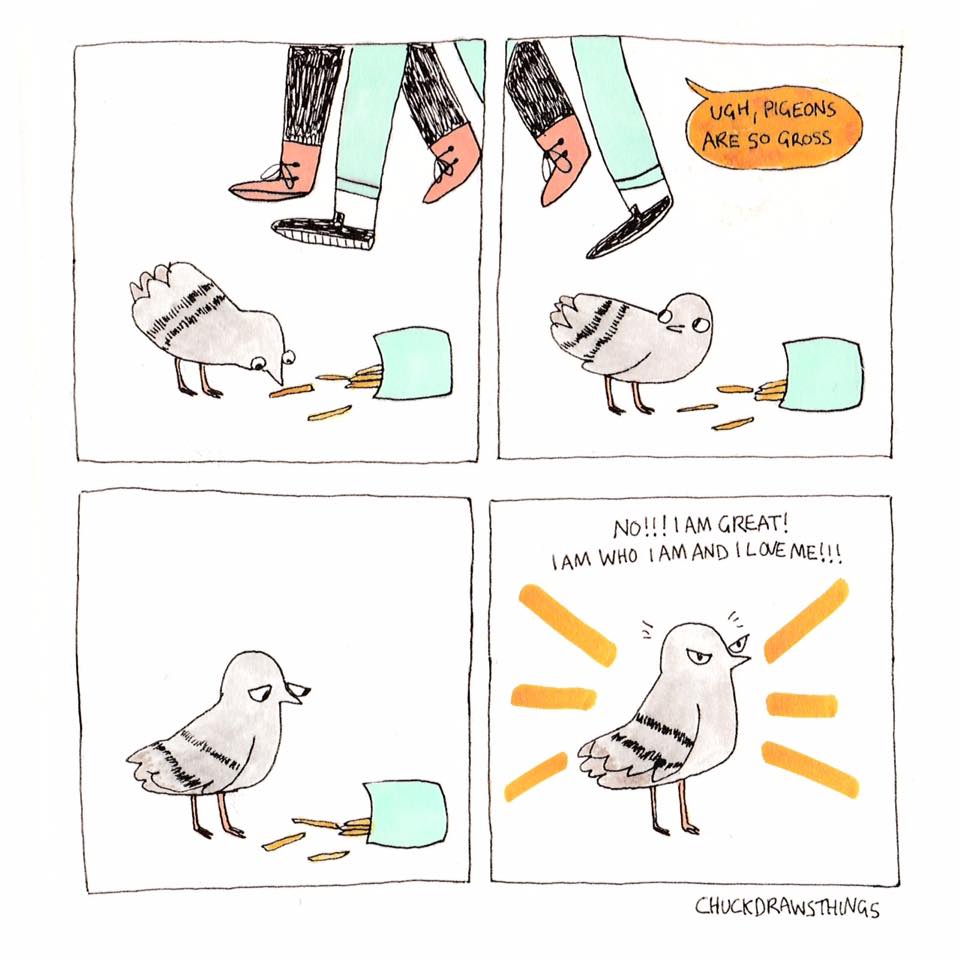 …and people responded really positively to it. That, combined with the fact that pigeons have always been my favourite animal, made it seem like it’d be fun to make them a main feature of my drawings. I think they’re really cute and silly, but also weirdly humble?

They get a bad rep for eating garbage and being basically everywhere, so they’re like the underdog of the bird world, and in a very strange way, I think that makes them relatable. They have so much personality, but they’re kicked about quite a bit – I think everyone can sympathise with that. 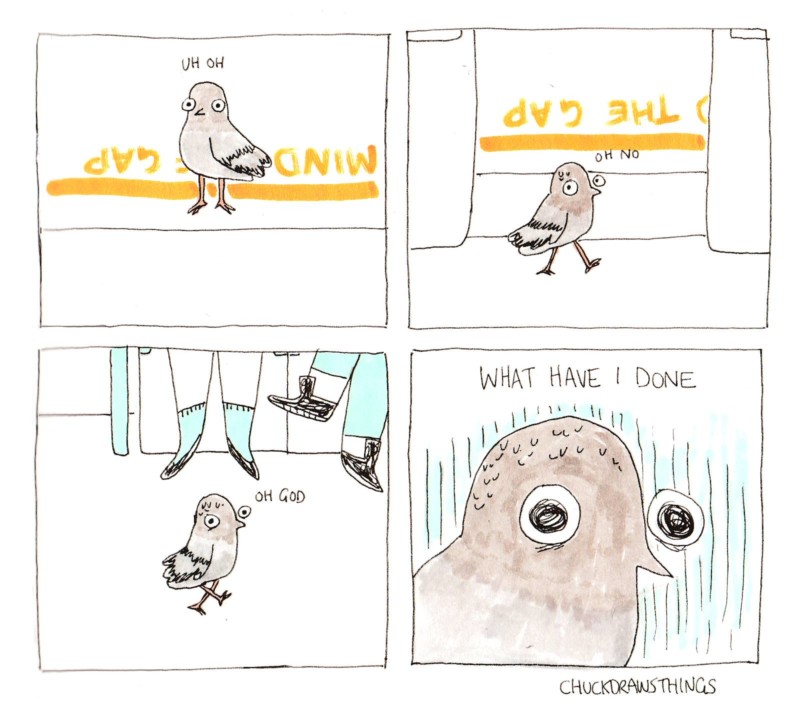 Seeing pigeons in places they have no logical reason to be, always makes me laugh.

Growing As An Artist

CV: Do you create with a pencil and paper, or do you work digitally? A mixture? Describe your creative process for us.

Chuck: I use a Tombow hard brush pen for lines, and Letraset markers for colouring. If I don’t have a particular marker colour, I’ll colour in using Paint Tool Sai. I also use a watercolour texture as well, so it’s a mix of traditional and digital I suppose!

CV: When did you notice your work to start to gain a following? How does that feel? Does it add any pressure?

Chuck: The self-worth pigeon comic just blew up out of nowhere and it totally threw me. My page shot up to 5000 likes in just over a week and it just totally astounded me! It feels really great since I’ve been drawing for pretty much all my life and this is the first time people have really actively engaged with stuff I’ve produced.

But at the same time, it does add a level of pressure. I feel more inclined to try and consistently produce art to keep up engagement, and now more than ever I struggle with ideas, constantly wondering “is this good enough?” But ultimately I think that that pressure is a good thing, so it’s not all bad!

The State of Webcomics

CV: Webcomics seem to be increasingly popular. Is there anyone you look up to?

CV: With all the content out there now, is it hard for you to conjure up original ideas? Making these comics is almost like a stand-up comedian. You try not to step on anyone’s toes.

Chuck: Yes, very much so. Most of the time when I have an idea I have to scan my brain to double check I haven’t seen it anywhere else and inadvertently dredged it from my memory. Plus, I don’t really think I’m innately that creative. It’s very difficult for me to sit down and focus, and try and come up with ideas. But the plus side of there being so much content out there already is that there are so many artists to be inspired by! 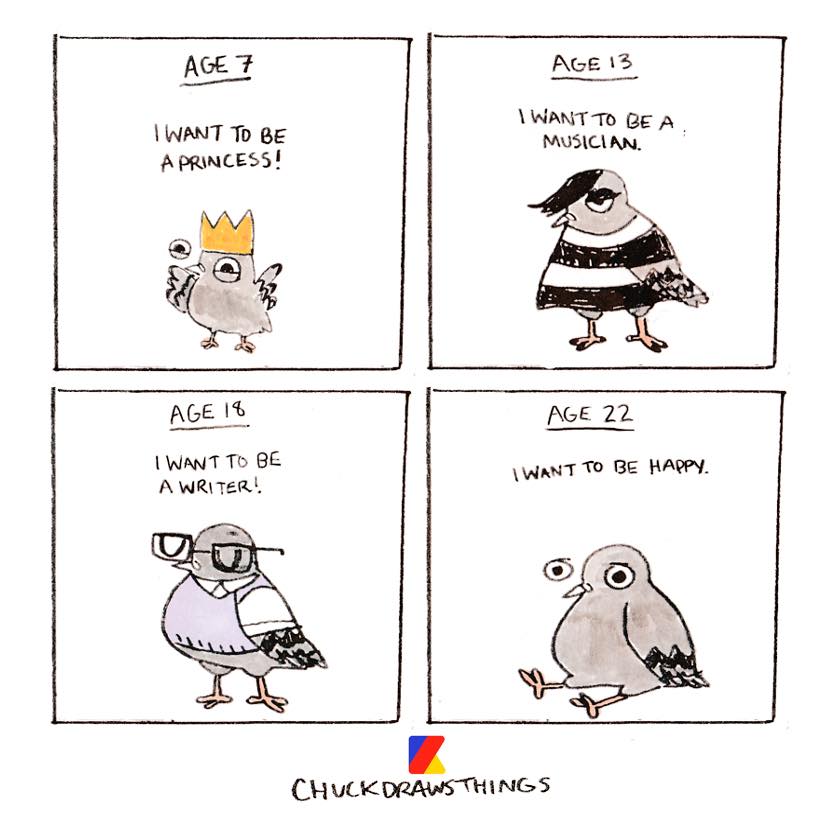 The Difficulty of Relatability

CV: What’s the most difficult aspect of creating these relatable-pigeon-gems?

Chuck: I’d say there are two main difficulties. The first is trying to find a balance between being relatable and providing some sort of positivity or punchline. I try and shine a light on the so-called ‘ugly’ aspects of mental illness so to speak – having no energy, experiencing horrible thoughts, the debilitating loneliness, and so on.

And while I absolutely think these things shouldn’t be sugar-coated, that sometimes there just isn’t a way to be positive and you have to just endure, I do want my art to have some sort of hopefulness or at least humour about it. Whenever I draw something, I always ask myself “is this too bleak? Is there no message to it?”

The second is that, as you may have guessed from my subject matter, I’m mentally ill, specifically experiencing depression and anxiety. There are some days where I just have absolutely no motivation to even get out of bed, let alone pick up a pen and draw. Other days there are so many things running through my mind I can barely focus enough to sit still and have a steady hand. It’s hard sometimes finding the right mindset to even draw in the first place.

READ: An Exclusive Interview With UP AND OUT‘s Julia Kaye!

CV: Mental illness is a common theme for artists. How do you approach it? What message would you like to get out there?

Chuck: I try not to force positivity where it isn’t really appropriate. As I said, I try and portray the real sense of futility that living with mental illness can entail, but I want to try and normalise that.

I want to show that it’s okay to have those moments of hopelessness, that you don’t have to constantly put on a happy face and try to look on the bright side because the truth is, sometimes there are moments where there isn’t one. Sometimes, all you can do is just take time for yourself and endure the bad times, and there’s nothing wrong with that. I want there to be less of a stigma around that aspect of mental illness.

READ: OUR CATS ARE MORE FAMOUS THAN US Review!

CV: What’s been the most rewarding aspect to come out of Chuckdrawsthings?

Chuck: It’s the wonderful messages I get from people saying that my art made them smile, or made them feel better, or less alone. Reading such kind and thoughtful words make me, in turn, feel less isolated, and more motivated to keep drawing because it’s so fantastically rewarding to be able to connect with people.

CV: Where would you like to take this? Any goals or aspirations you have in mind?

Chuck: God, I really have no idea! I’m currently working on opening a shop to sell prints, so we’ll see where that goes! Maybe a book or something? That’d probably be a long, long way down the line though.