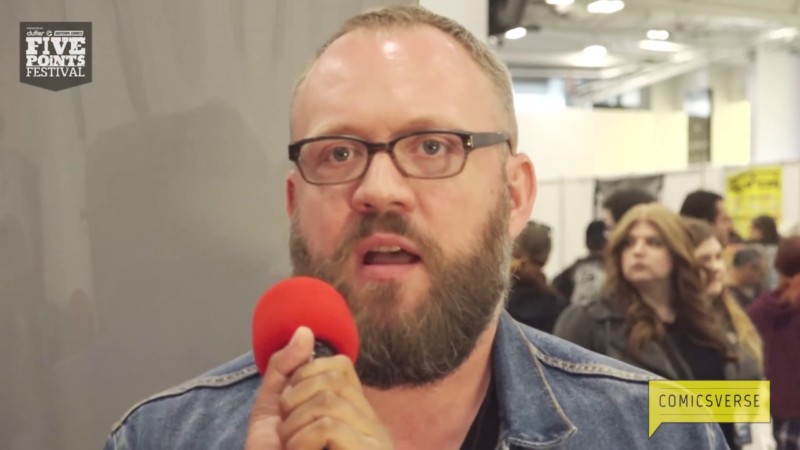 During this past weekend’s Five Points Festival, we at ComicsVerse had the pleasure of interviewing writer Christopher Hastings. Relatively new to some in the world of mainstream comics, Hastings is quickly making a name for himself. With credits for ADVENTURE TIME, VOTE LOKI, and DEADPOOL, Christopher Hastings leaves a mark with his brand of comedy and meta-commentary.

The Brooklyn native is no slouch when it comes to expressing commentary on various subjects. Christopher has a history of sketch comedy in New York while he continues to write and draw his webcomic, THE ADVENTURES OF DR. MCNINJA. Hastings would soon find himself lending his talents to Marvel Comics and Boom Studios, leading up to writing THE UNBELIEVABLE GWENPOOL, a book that takes the ideas and chaos of the Marvel universe and puts it in the hands of a modern day comic book fan. He is also the writer for the new series I AM GROOT. I AM GROOT follows baby Groot trying to find his way back to the Guardians of the Galaxy.

WATCH: We got a chance to chat with SECRET EMPIRE writer Nick Spencer at Five Points! Check it out!

We were able to get a bigger picture of Hastings’ thoughts and influences. We discussed the ideas and inspirations behind I AM GROOT. This discussion included the question of reality in THE UNBELIEVABLE GWENPOOL. It was a blast talking with him about what makes his work not only funny but at times insightful and eye opening. The thoughts and motivations behind any given character he writes are ingenious. While he couldn’t divulge all of his secrets, he did give a tease as to what we can expect from future issues of THE UNBELIEVABLE GWENPOOL.

READ: Catch up on Gwenpool’s adventures with our review of GWENPOOL #14!