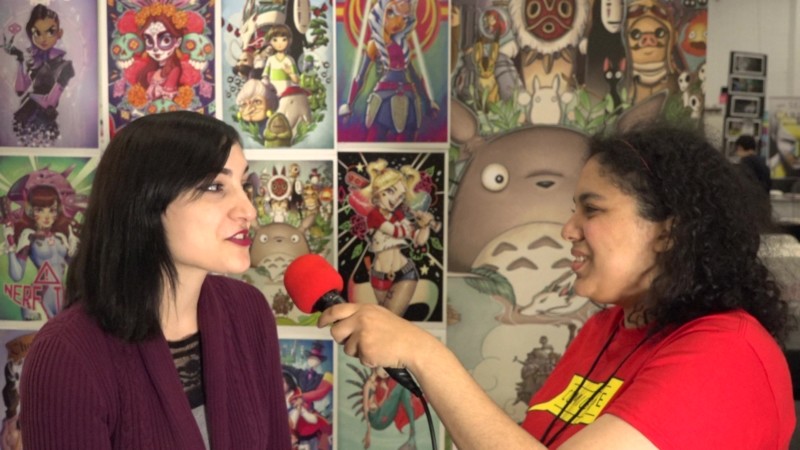 Anyone who says “don’t judge a book by its cover” has clearly never seen Chrissie Zullo’s covers! Her extensive resume, going across multiple publishers, is a testament to her popularity. She has penciled covers for Archie’s ARCHIE and JOSIE AND THE PUSSYCATS, Dynamite’s VAMPIRELLA, Dark Horse’s THE HELLBOY 100 PROJECT, Vertigo’s FABLES: THE WOLF AMONG US, among others. However, don’t think Chrissie Zullo is just a cover girl! She is a triple threat as a penciler, inker, and colorist for comic interiors. Her interior work includes MADAME XANADU #26 and both the WOMANTHOLOGY: HEROIC and WOMANTHOLOGY: SPACE anthologies.

Chrissie’s style is distinctive in its loveliness. Her bright colors make her covers pop beside the more “serious” dark covers popular with hero comics. Furthermore, her rounded lines and anime-like eyes give her young girls the appearance of actually being their age — a rarity in the comics industry. These are just some of the reasons Chrissie’s work is loved by industry professionals and art fans alike. Between juggling commissions from the several publishers and selling her own artwork, Chrissie Zullo has been judged — she is one of the most exciting artists in comics today! Need further proof? Watch our Chrissie Zullo interview and judge for yourself!

WATCH: We also had the pleasure of interviewing writer and publisher Amy Chu at Five Points. Check out our interview here!

A favorite among the ComicsVerse staff (we interviewed her last November and last May), Chrissie Zullo kindly caught up with us. During our chat, we discussed what makes a good cover, her influences, and the importance of not over-sexualizing girls and women on the covers of comics. Spoilers: Chrissie is just as adorable as her “Me v. Toon Me Outfit of the Day” drawings. We would like to thank Chrissie again for the interview!