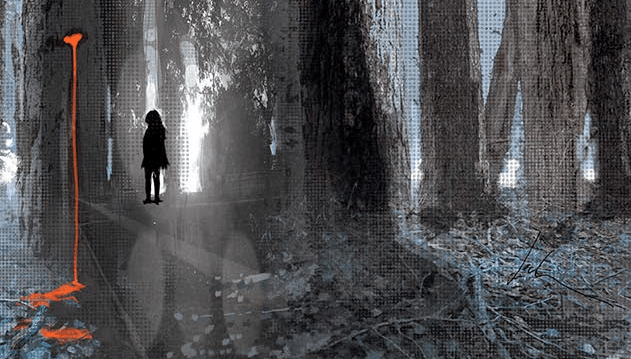 So it’s coming up to the spookiest time of the year, and with the cold coming in, and the nights getting darker, there is nothing better than turning the lights down a little bit, cosying up by the fire, and opening a comic book full of horror. Below are my own personal picks in terms of what to read, with an addition of a webcomic. Some you may know of, some you may be surprised by, but all of them guarantee chills. So whether you’re into full blown gore or a more subtle style of terror, you will find something here to make sure you will be covered in goosebumps.

1) WYTCHES by Scott Snyder and Jock

Scott Snyder is best known for his excellent BATMAN run with artist Greg Capullo. Even here, in DC’s flagship book, you can see the undertones of horror coming through. Indeed Batman’s last (for now) encounter with the Joker was fret with colorful splashes of nightmare. 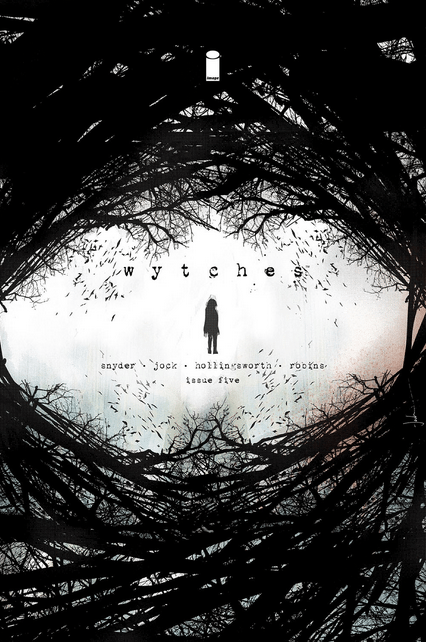 WYTCHES is Snyder unrestrained. He takes the idea of a witch and plays with it, creating monsters which live beneath the trees of the forest and give favours in exchange for a ‘pledge’. The pledge usually takes the form of an unsuspecting victim. After a brief prelude which sees a woman unsuccesfully crawl out of a hole in a tree, the story focusses on the Rook family, and in particular the daughter Sailor after they move to a small town. There are rumours that Sailor murdered a bully called Annie. However, something much worse happened to Annie, and it wants Sailor too.

Synder plants a family with real problems at the heart of this, and then throws a supernatural threat at them that is terrifying in its reach. While Snyder creates unravelling horror, Jock creates monsters that you struggle to define in their hideousness. Tall bloating skeletal monstrosties, hiding and waiting, ready to rip you from your world and tear you apart. To top it off, Clem Robins’ lettering brings chills to the blood. The sound of the Wytches “Chit, Chit, Chit” will stick with you long after you put the book down. While there is horror, there is also heartbreak and real humanity within the first volume of this series, and that makes the pain and loss all the more gut wrenching. As perfect a horror comic as you can get.

WYTCHES volume 1 contains the 6 issues and is available at all good comic book stores and online.

WATCH: Alex caught up with Scott Snyder at NYCC Special Edition 2015. See what he had to say! 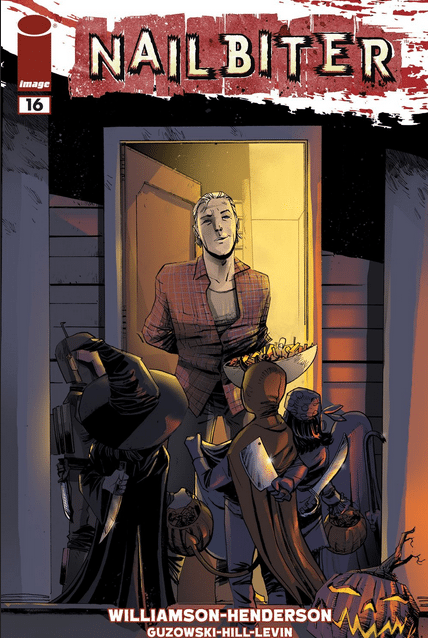 The staple of any Horror list has to include a slasher book, and what better book than NAILBITER? Set in a town that is the birthplace of serial killers, Williamson’s and Henderson’s slash-a-thon has so much more going for it. At times funny, at times not for the squeamish (nail biting is not the worst of it) it asks the question; what makes a serial killer; destiny, choice, or something even more sinister?

The series is a strong addition to the serial killer genre, with some creative ideas on how to kill someone (clown car killer, anyone?). The pacing is stellar, with Henderson switching between straight-up gore and something more subtle. The Y2K killer entering the Morgue as the lights switch on and off is a masterclass in comics suspense. Williamson drops some clues about where this is heading, but the destination is anyone’s guess.

With 3 volumes behind it, this is a series you will want to read in chunks, as each cliffhanger makes you scream for more. Each collection is available from your local comic book shop and online.

READ: Check out what Joshua Williamson is writing for All New All Different Marvel! 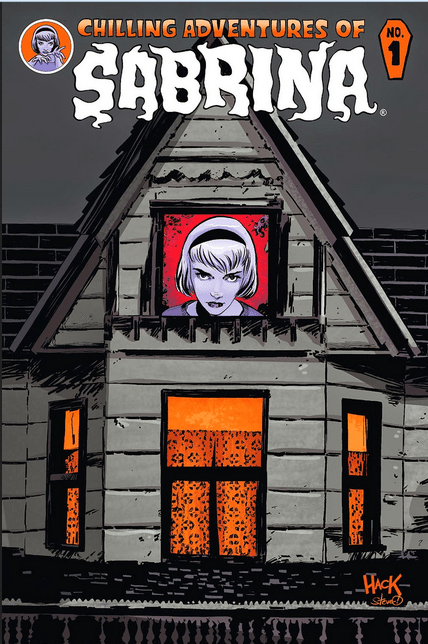 Sabrina? Are you kidding me? Why must you remind me of Melissa Joan Hart and canned laughter. Forgive me horror enthusiast for terrifying you in such a manner, but this is not Sabrina as you know her. This is a hard horror reboot, with Sabrina being a coming of age story with a twist. Sabrina Spellman lives with her two aunts after her father dissappears (turned into a tree) and her mother is placed in an asylum. They are witches, with an appetite for human flesh, and it’s going to be Sabrina’s sweet sixteenth soon. There can be only one thing to do. Pledge her to the Devil. Infused with dream like art by Roberto Aguirre-Sacasa, it feels like what if ‘Rosemary’s Baby’ was a comic. This is the definition of a creepy comic, at times peppered with humour, but layered with the unholy. The domestic life with the satanic undertones. Sabrina is torn between life as a human and her obligations to her coven. On the eve of her birthday, will she wed Satan or confess her love to Harvey Kinkle? Set in the 60s, this is a Sabrina that will make you forget ‘funky song’, and replace it with a world of swinging sixties beats and Lucifer calling to you from the woods.

Issues 1 to 4 are available from all good comic book stores.

Also read: AFTER LIFE WITH ARCHIE by Roberto Aguirre-Sacasa and Francesco Francavilla

READ: What’s going on with All New ARCHIE? Check out our review of ARCHIE #3 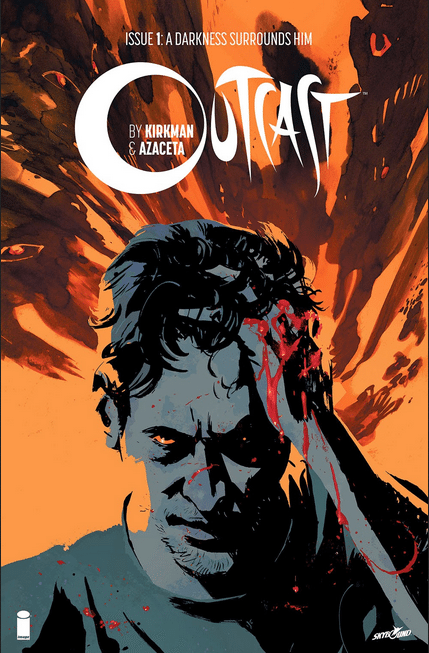 What’s Halloween without a little demon possession? OUTCAST is the brainchild of Robert Kirkman, creator of a small book about the undead that I’m sure will be a big hit one day. OUTCAST is the story of Kyle Barnes, someone who has being plagued by those around him being possessed by demons. He can cast them out, but sometimes it works, sometimes it doesn’t, and the reprecussions for the survivors do not always bode well. Kirkman does not offer easy answers with this story and it really feels like a slow burn. All that does it ratch up the tension, and there is some tense moments in this book. Paul Azaceta doesn’t miss a beat, creating a life like world where the demonic can be anywhere, and usually is. His panels speak volumes but it’s the small boxed panels he creates that adds a movement or a minute detail only adds to the horror of the situation. The demon possessions themselves are terrifying, and the heros’ excorcism routine fails more often than it succeeds. Breathing new life in the excorcism genre, this is a book I look forward to every month, even in it’s most unsettling moments. Prepare to expect the unexpected.

READ: Check out Bri’s review of THE WALKING DEAD #145

5) WHO NEEDS THE MOON by Todd McCullough 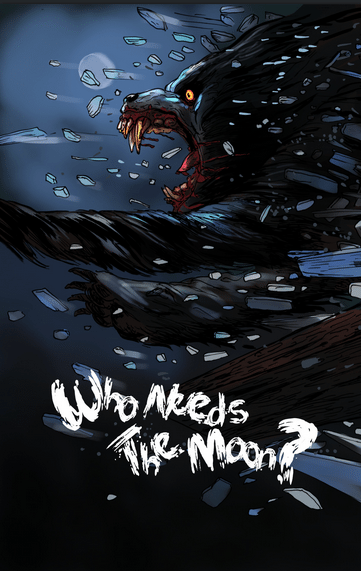 With so many horror comics out there, it’s hard to stand out in the market, and while it’s great to have a comic on the shelf, it’s not the only market to play with. Todd McCullough has managed to create a web comic that demands attention, and gives you what you want: Werewolves and vampires (you thought I’d create a horror list and not mention werewolves and vampires?) I first discovered this web comic roughly a year ago, and was pulled in by Todd’s art. In a lot of ways, the art is slightly cartoony, and I could easily imagine it as an animated series. But what I liked even more was how it played with the werewolf lore and the use of vampires. These vampires are not lost sad souls, but creatures of evil, and our hero, who develops wolflike senses as the full moon approaches, dispatches them with aplomb. In a lot of ways it’s horror at it’s funnest, with the art style combined with the colorful splashes of blood making it a great horror read. However, without giving too much away, as the moon gets closer, the wolf’s yearnings and blood lust takes over, and the book takes a turn you did not expect. I began reading this as a webcomic but ended up buying it on print when it was a kickstarter. Either way, I would recommend you pick this up in any format you want and be entertained and horrified in equal measure.

There are 8 issues of WHO NEEDS THE MOON and they can be found on gumroad.com and comixology.

So there you have it, five good horror comics to sink your teeth into. Ready to put a stake through my heart for not including your favorite horror series? Let me know what I should read in the comments section below or on Twitter @Comicsverse. Remember to do so before the sun comes up, or I’m dust!