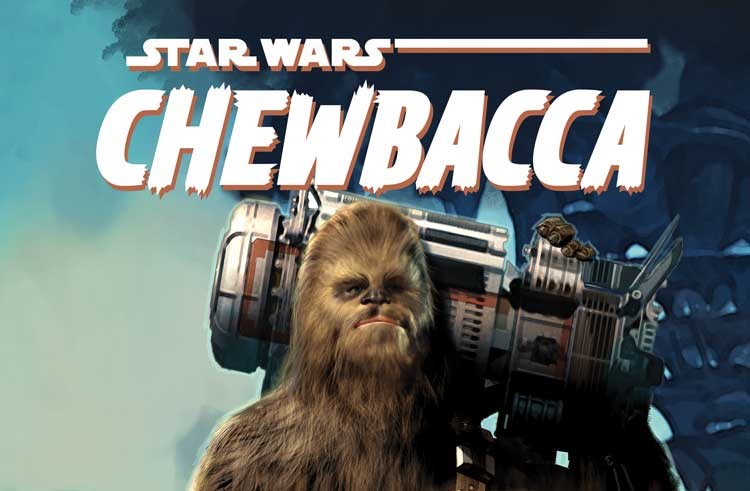 What can one expect from a book centered on a character that only speaks in growls? Little, I would assume. However, volume one of  CHEWBACCA by Gerry Duggan and Phil Noto defies those expectations. Many will overlook this book due to that seemingly weird premise. However, writer Gerry Duggan and artist Phil Noto take Chewbacca and throw him into one of the most exciting adventures Marvel has done with STAR WARS so far. Thanks to its bright art, character-driven story, and a wonderful new character, CHEWBACCA rises above the rest of the STAR WARS books to spin a heartwarming story of friendship, family, and bravery.

While Chewbacca is indeed the title character, he’s not the main protagonist. Zarro, a young girl imprisoned by a sinister mob-like thug, is the real hero. After being held captive with countless others and forced to work in the mines, she escapes to find help. In doing so, she snags Chewbacca, takes him to the mine, and starts a grand adventure. It’s short and sweet and has surprising repercussions for the entire empire.

Above all else, this book is just plain fun. It somehow manages to capture the adventurous spirit of the original film in a way that no other book has while treading new ground in nostalgic ways similar to THE FORCE AWAKENS. Zarro is a character that readers will instantly fall in love with, and seeing her interact with someone as beloved as Chewbacca is pure eye-candy. Together, the duo bring an interesting dynamic to an old plot: She’s the brains, he’s the brawn, and together they thwart the empire. Duggan does a great job of setting the stakes, too. If Zarro and Chewie fail to protect the planet, all will fall under the merciless rule of the empire. Duggan’s storytelling strengths lie in crafting a fun adventure filled with new things (like neon poisonous beetles) set against such a bleak backdrop.

More than any other STAR WARS book yet, the art in CHEWBACCA lends a wonderful hand to the storytelling and tone of the book. While others may look nice, Phil Noto’s hazy, almost dream-like colors and pencils elevate the story in a lot of ways. They make the world pretty to look at (which can’t be said for a lot of planets in this universe), they remind us how fun this universe can be, and they perfectly capture the character’s emotions. When Zarro is in pain, the reader really sees it. It’s hard to show expression in Chewie’s old mug, but this book is filled with it. 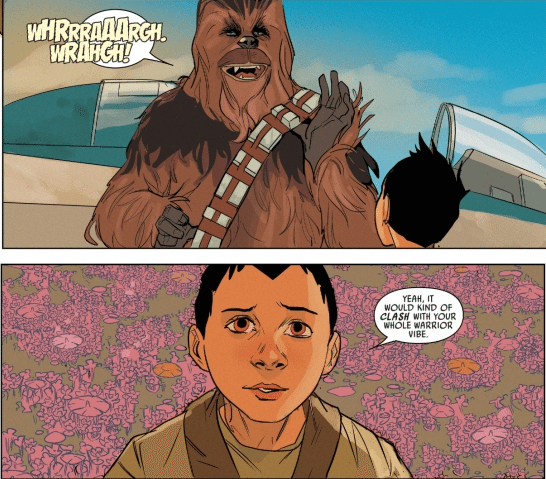 Every STAR WARS comic can take some advice from this book. It is difficult to tell a story when the readers ultimately know how it ends. Like in the flagship STAR WARS series, readers know  how the characters end up in the next film. VADER DOWN, for example, struggled to tell its story with any stakes. Making a new character in an awesome universe is something that should be done regularly for this line of comics. When the story centers on a new character, however, with someone like Chewbacca taking the side-kick role, it becomes insanely more engrossing

READ: Curious about VADER DOWN? Read our full review here.

CHEWBACCA is a wonderful reminder that not all STAR WARS books have to present new threats to Luke and Leia, and that sometimes a little world-building outside of the main stories is a welcome thing.