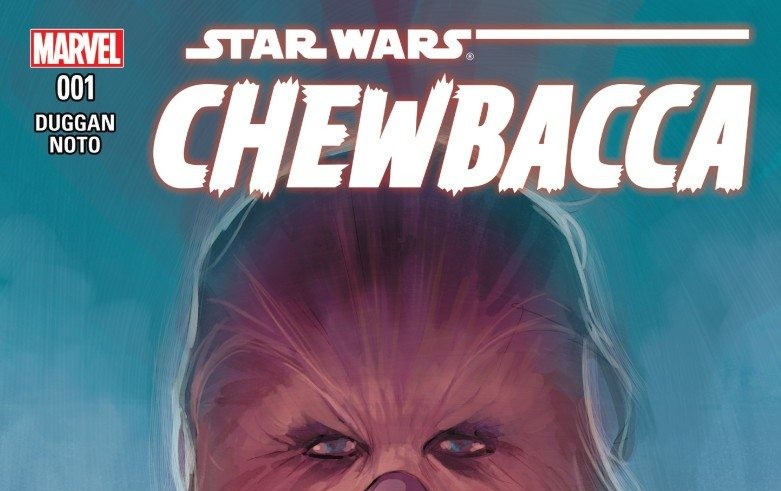 Everyone’s favorite walking carpet gets his own comic book series… but that’s not necessarily a good thing.

Shortly after the destruction of the Death Star, Chewbacca finds himself on a secret and personal mission. Emergency repairs to his ship, however, force him down onto an Outer Rim planet with no shortage of unsavory characters. What should have been a pitstop and maybe a moment to rest just might turn into a Wookie’s fight for freedom.

CHEWBACCA #1 isn’t bad, per se. Rather, it’s confusing, seemingly the product of several pieces that function well on their own, but weren’t quite put together right. There are good ideas here, and Phil Noto is a great artist, and Chewbacca is a fun character, but they don’t gel. One would forgive these inconsistencies if this were the start of a potentially-long-running series, but that’s not what this is: CHEWBACCA is scheduled to run for only five issues, so right off the bat, 20% of your run is disappointing. Noto (whose art on BLACK WIDOW was in a class all its own) seems defanged here; the dialogue is strained; the action is confusing, and, worst of all, the tone is muddled at best.

Chewbacca crash lands on a planet, and in his attempt to get his ship fixed, he meets Zorra, a girl whose father owed money to the wrong sort, which got her and her father sent to work in a mine. She escapes, and tries to enlist the help of Chewbacca, and, it’s clear slavery hits the deepest nerve with Chewbacca, so he agrees to help.

That’s the set-up for a good story, right? Problem is, a lot of things get in the way of appreciating that.

First, compare the work in CHEWBACCA with the sample here from BLACK WIDOW. You see how the lines on the WIDOW page aren’t overpowering, how the color is diffuse, lending the entire thing a sort of dreamlike, dynamic quality? I’m not saying Noto isn’t allowed to experiment and do new things–of course not. I’m just showing that example to illustrate the relationship between color, line, and gesture. It all feels of a whole, all the pieces coming together to say one thing. The work in CHEWBACCA seems at odds, seems like layers that weren’t merged, like you could grab one piece and move it around. There’s no cohesion between the pieces, so there’s no overall gesture–either that, or it gets lost. Look at the speeder bike below: the bike seems stationary, the character (Zorra) doesn’t register the movement, and the only gesture of speed (or movement at all) is the dirt beneath it… and that doesn’t quite do it. Additionally, Noto makes use of a blur effect (see an example here) that seeks to give panels depth, and it’s effective sometimes… but then the effect is overused. It comes across as lazy, like a film that’s poorly post-converted into 3D. 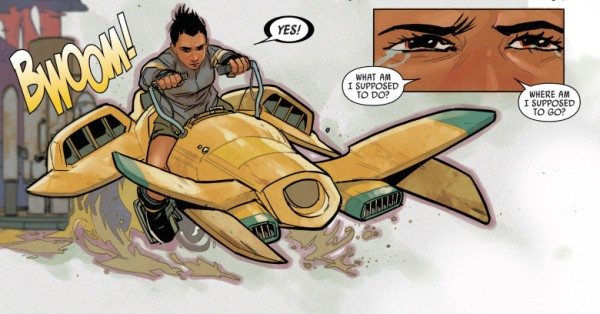 READ: MORE STAR WARS COMIC GOODNESS ON THE WAY IN THE FORM OF OBI-WAN & ANAKIN!

The problems don’t end there: the action is hard to parse out, with steps between moments not at all explained, leaving you to scratch your head, pause, and go back to figure out what happened. Look, I get that’s the way sequential art works–you’re not going to show everything, and you’re going to leave room for the imagination to put the pieces together, but when you’re blocking moment to moment action beats, what happens in the gutter between panels should be able to be deduced by context. For example: if a punch is thrown in one panel, and the next panel shows the intended target’s head snapping backward, you assume the punch landed. What happens too often in CHEWBACCA #1 is akin to a punch being thrown in one panel, and in the next panel the punch thrower has a broken leg.

While you’re trying to figure out what’s happening, you have to deal with dialogue that’s strained and sounds odd to the ear. The dynamic of the spunky young girl and her big, silent protector isn’t new (well, silent in a sense in this case), and it’s clearly what they’re going for here, and that’s actually not a bad thing! It doesn’t really get old–Natalie Portman and Jean Reno in THE PROFESSIONAL come to mind, or even Mission Vao and Zalbaar in STAR WARS: KNIGHTS OF THE OLD REPUBLIC (even though Mission is her own kind of annoying). The thing is, the dialogue that objectively reads as spunky and humorous comes across as annoying and abrasive because Zorra’s face doesn’t register any of the personality or charm necessary to pull that off. (Come to think of it, the same thing happened to Mission.) That kind of tone-deafness carries through the issue, too. 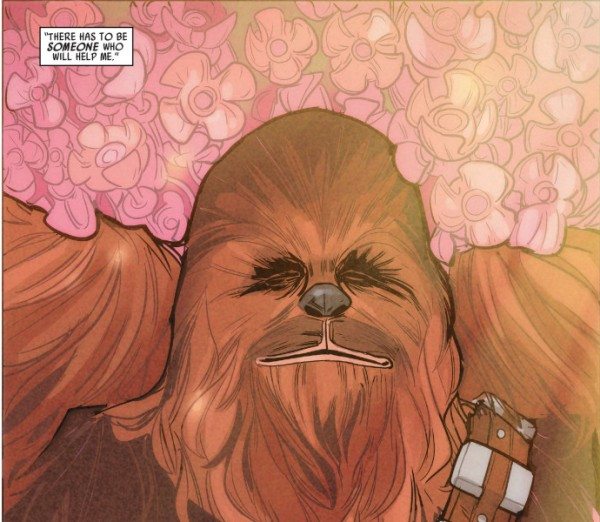 The opening crawl that serves as a prologue is clearly written from Chewbacca’s point of view, and starts things off on a humorous note. But then we shift to this plot about a family being enslaved that’s played straight, and then we shift to Chewbacca taking a nap on a bed of flowers, and then this girl just starts yelling at Chewbacca about how he needs to help her, and he just roars in response. By the time the issue ends, we’re not given any reasons to like our protagonists (the only likable thing about Chewbacca here are our memories of him from the films), and things are supposed to get worse for them before they get better. How am I supposed to care?

I really don’t like being this negative, but it’s hard not to be when you can see all the pieces so clearly, but they’re just not in place. It feels almost like watching a football team design all these ingenious plays and execute them perfectly… until the last moment where the ball is dropped every time. Your reaction, despite all your intentions to root for the team, is going to be negative and exasperated.

The quality of Marvel’s Star Wars comics has been a very mixed bag, and CHEWBACCA #1 makes it hard to justify the proliferation of these titles beyond marketing and cynical cash grabs. There are a lot of pretty pieces here–they just don’t come together to tell a good story.

And isn’t that the point?