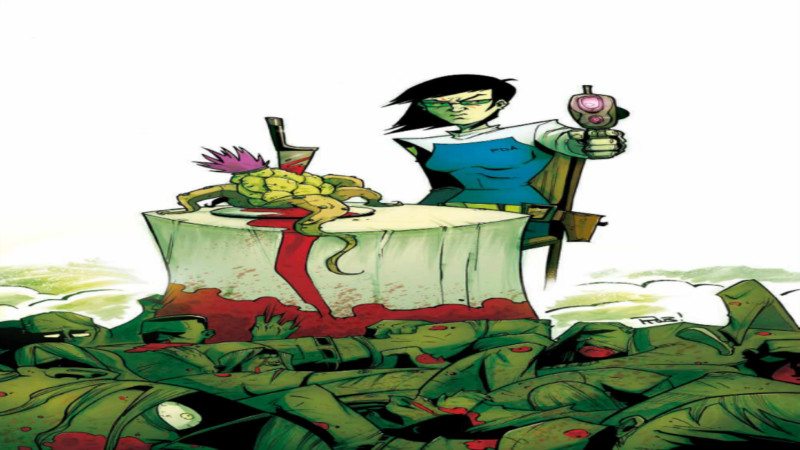 CHEW #60, the last issue by John Layman and Rob Guillory, is finally here, and it comes full circle! This brings the Sour Grapes arc to its conclusion. In the previous issue of CHEW, Tony read Amy’s world-saving manuscript, killing millions of chicken eaters to save the world. It ended with Tony holding the lifeless body of his partner John after he accidentally consumed chicken.

A few questions remained unanswered: Who was the outer space mastermind behind the sky writing? What became of Tony after losing Amy and John in Issue 59? Who is the woman on the cover of this issue? Hint: It’s a clever reference to the cover of CHEW #1. All that and more gets answered as it goes out with a bang! If you haven’t read the series, please do yourself a favor and check it out from the very beginning because it’s hilarious, it’s comically disgusting in a good way, and it has super powered humans who gain their abilities from food.

READ: Need a recap on what happened on the previous issue of CHEW? Check out our verdict on CHEW #59!

CHEW #60 is an epilogue that takes place an unspecified number of years in the future with a geriatric Tony reminiscing on the past after chewing on his fingernail. It’s a treat for long time readers who have stuck with the series since the very beginning because it highlights all the major moments of Tony’s adventures. It’s a poignant moment as it demonstrates how far Tony has come, his most cherished memories as well as his saddest memories. 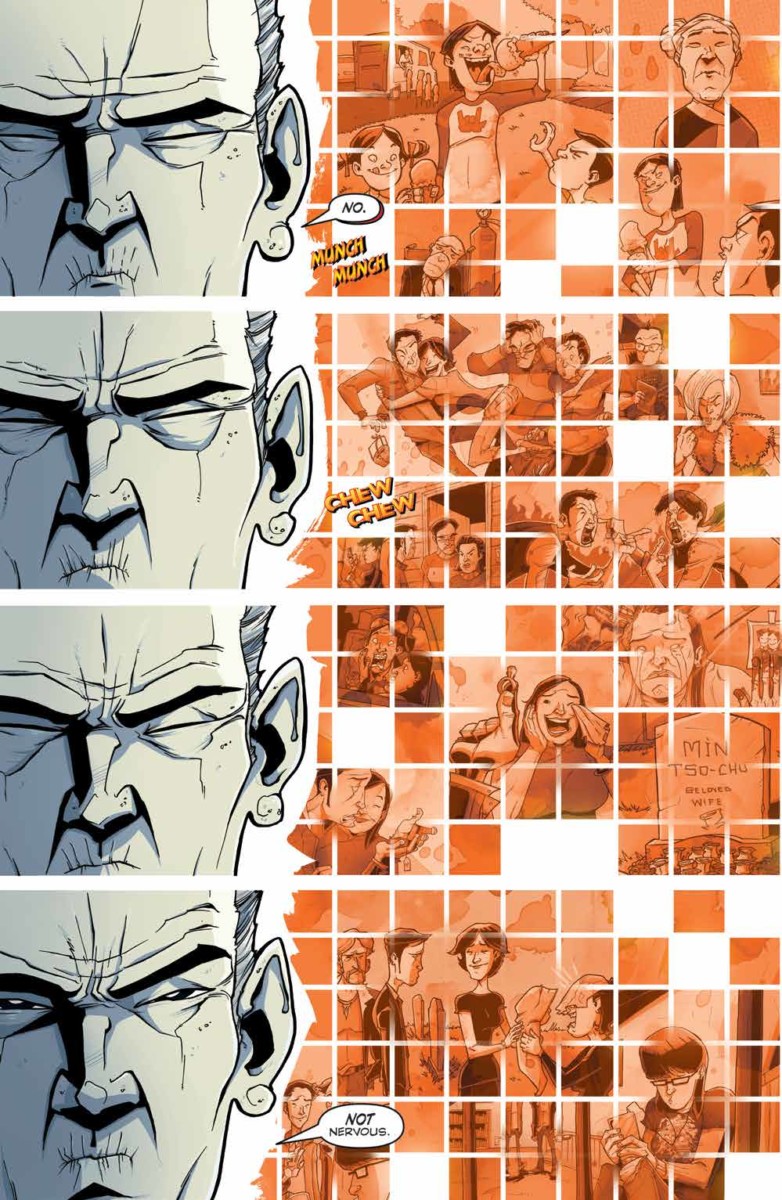 The story then jumps to a subplot with Olive—Tony’s daughter, all grown up and an FDA agent just like her dad—and her partner, Ginny as they go to confront Peter Pilaf, an old nemesis of Tony’s, powers reminiscent of a mix between BATMAN villain Solomon Grundy and Hannibal Lecter with a veggie twist. Olive and Ginny’s relationship is a callback to Tony and John’s relationship in that it’s clear that they’ve been on some adventures and share some hilarious banter. Much like her father, Olive kicks ass and takes names so it’s great to see her come into her own in this last issue.

The plot ties the last few remaining loose ends into a pretty bow by culminating with an arrival ceremony of extraterrestrials at Area 51 . The identity of the aforementioned extraterrestrials is revealed; Olive and Tony’s brother, Chow, has an epiphany after Olive notices an object has gone missing from the house, and, most importantly, Tony’s main reason for attending the arrival ceremony with his FDA boss Applewood and Agent Cesar is answered.

CHEW #60 is a sincere love letter to fans to the very end. Layman and Guillory go all out delivering on the themes they had established from the outset: the importance of family, duty to getting the job done no matter what, and honoring the past. I think these themes were addressed smartly throughout this issue by connecting Olive to Tony; just as Olive closes a case in her subplot, Tony has one final job to do. The series’ trademark humor and over-the-top violence is present throughout this issue as it feels like being immersed into a cartoon. As a testament to how on point the humor is, I laughed out loud several times while reading it.

READ: Look to the stars and and read our verdict on STAR WARS: THE FORCE  AWAKENS!

The art continues to be a joy to marvel at in every single page and remains a strong point. Once again, there are little details in the background that flesh out moments and explain the current situation. One example of that is this page which I think does a wonderful job demonstrating what went down. For instance, the bottle of liquor to the left of the bed says “Layman Brand Hooch: It’ll kill you,” a winking self-reference to one of the creators; the Stoner Times news paper with the headline says “Clouds am I rite?;” the post-it note that says “Buy more drugs;” the pizza box with half a slice of pizza; the empty bottles of alcohol; the heart shaped balloon with hearts in it. This whole page is brimming with so much details as it’s visual storytelling at its finest! Major props to Layman and Guillory for nailing down each page with the careful balance of showing and telling. 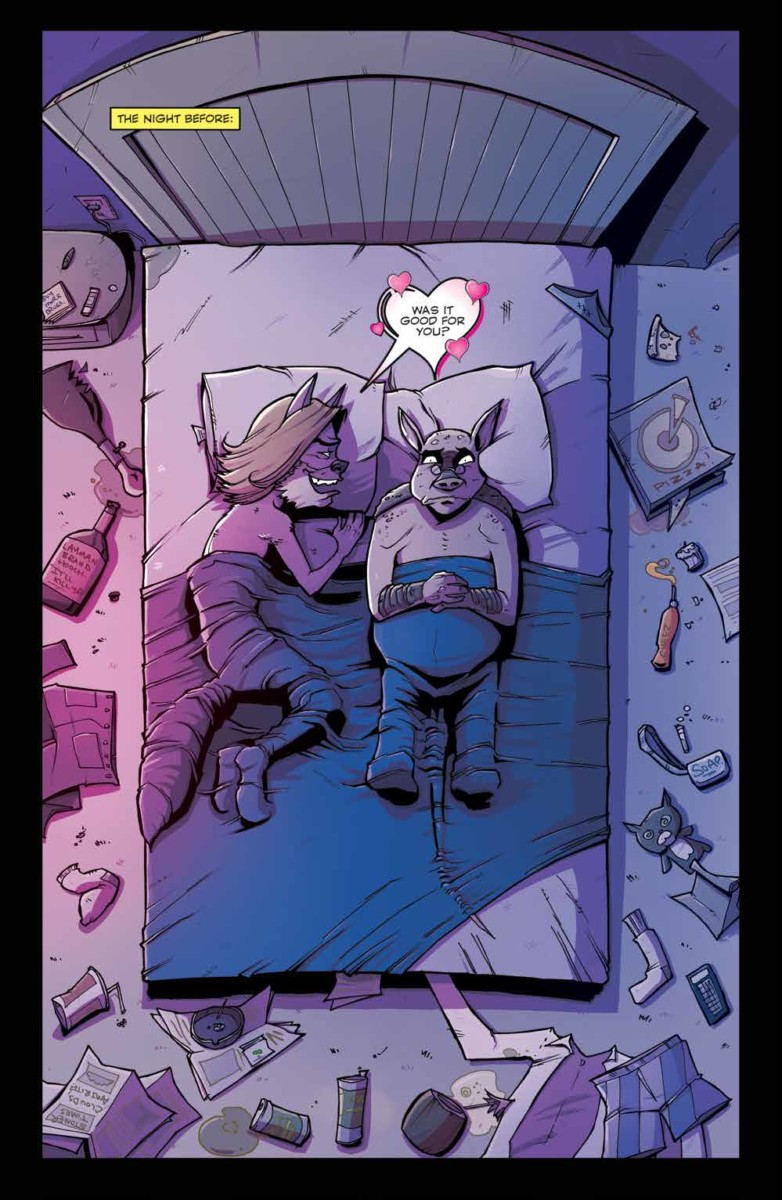 Like a Thanksgiving feast complete with dessert and drinks, CHEW #60 is a a deliciously satisfying conclusion to Tony Chu’s story. By the time I reached the very last page, I was stunned and applauded once I processed it. All good things must come to an end at some point in life. Layman and Guillory deserve to take a bow for one hell of a great series. I’m sad to see the series end as I would love to see a spin-off comic book series featuring Olive and Ginny. Yet, at the same time, I’m looking forward to Layman and Guillory’s future endeavors, so all the best to them moving forward.