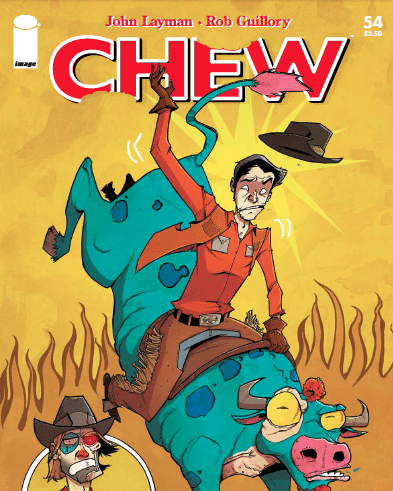 CHEW is fast-approaching its end. The series is phenomenal, but at over fifty issues long not every issue can be gold. Sometimes an issue exists to take the reader from point A to point B, and that’s okay. If I read CHEW #54 without ever having read another issue of CHEW, I would’ve been very impressed. That being said, the creative team of John Layman and Rob Guillory has set the bar intensely high. They’ve done better in the past, and I’m confident they’ll do better in the future.

In CHEW #53, Tony rejected Savoy’s plan to work together. And of course, Savoy isn’t taking it very well. CHEW #54’s prologue opens with an angry Savoy monologuing alone, wearing slippers in an armchair. He makes it abundantly clear that he is now done playing around and out for blood. Things don’t look too good for Tony. 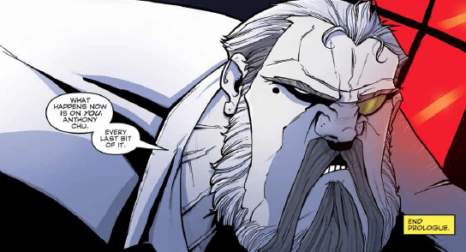 As always, artist/colorist Rob Guillory does a phenomenal job. Over the past fifty-four issues his style has gone from innovative to iconic. Guillory’s talent maintains its strength whether he’s applying it to apocalyptic cityscapes, or gene-spliced groundhog/chicken hybrids. Lucky for us, this issue contains both, and everything in between. 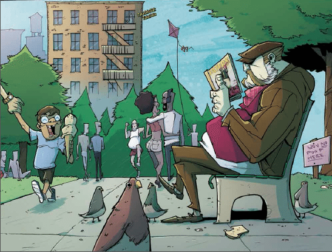 It’s difficult to actually say anything about the plot without giving too much away. CHEW #54 is twenty pages alternating between serious, plot-point-filled narrative (fittingly driven by Tony’s wife, novelist, Amelia Mintz) and what at this point in the series can only be called playful filler. Writer John Layman’s work on this issue of CHEW is the narrative equivalent of slowing a roller coaster down every few seconds during its most anticipated drop. I understand that safety is a concern, but I’m here to scream.

It feels like Layman is trying much too hard to simultaneously pry the door open on the next and last story arc of the series, while also tying up loose ends. This is understandable. If “Sixty Issue Run,” the name of the thoroughbred racehorse shown winning the Kentucky Derby is any indication, both CHEW and our window into the life of FDA Agent/Cibopath Anthony Chu are sadly coming to a close. With only one issue left in CHEW’s current story arc, it’s safe to assume that Layman and artist Rob Guillory have something big up their sleeves. Even though I’m not yet finished with the appetizer, I’m certainly ready for the main course. 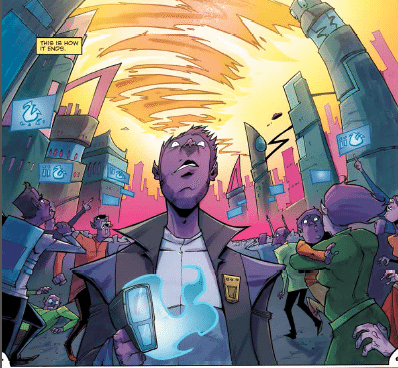