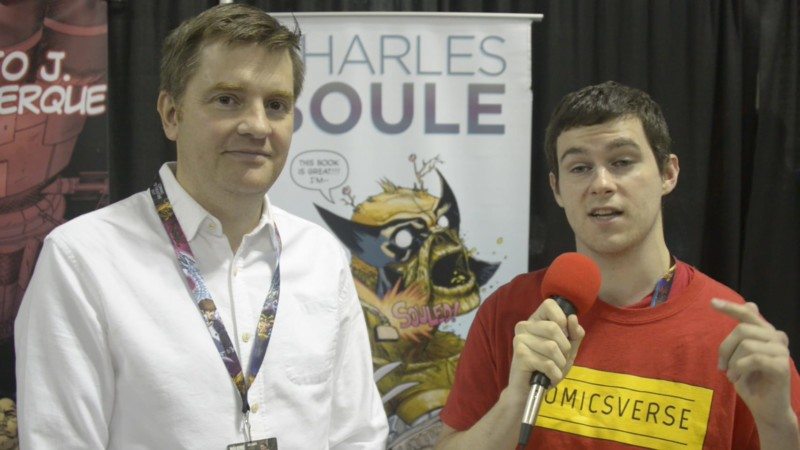 If you’ve been following Marvel Comics for the past few years, you’ve probably heard of writer Charles Soule. He, along with artists like Ryan Stegman and Steve McNiven, revitalized the Inhumans franchise to become one of Marvel’s top properties. His work as a lawyer inspired runs on SHE-HULK and DAREDEVIL, both of which received critical acclaim. On top of that, LANDO and STAR WARS: POE DAMERON put the spotlight on some fan-favorite Star Wars characters. However Soule’s work isn’t solely at Marvel. In addition, he has an upcoming creative-owned series, CURSE WORDS, at Image Comics with collaborator Ryan Browne. Knowing how busy his schedule is, I was a bit surprised to get the opportunity to interview Soule, but it gave me an opportunity to speak to a writer I respect and admire.

READ: Want to see what Soule’s writing? Check out our review of the second issue of DEATH OF X!

While I first came across Soule’s work when he was at DC with SUPERMAN/WONDER WOMAN, he became one of my favorite writers with the bright, intelligent SHE-HULK series featuring artist Javier Pulido. The book followed She-Hulk in her role as a defense attorney and how it affected her role as a superhero. This is paralleled in Soule’s current run of DAREDEVIL, where Matt Murdock works as both a prosecutor and a vigilante. Soule’s experience as a lawyer holds a huge influence on his work, and I wanted to find out how he approaches using that experience in his writing.

WATCH: Want to check out NYCC interviews with other Marvel writers? Watch our interview with Amy Reeder and Brandon Montclaire of MOON GIRL & DEVIL DINOSAUR!

From the Inhumans’ wars with Iron Man and the X-Men to a rogue wizard in Times Square selling magical spells, Soule breaks down what he’s working on and how he approaches each project. Speaking to Charles Soule was a highlight for me and if you get the opportunity to speak with him at a con, take it. Until then, check out this interview and get a peek into the mind of one of Marvel’s most talented writers.