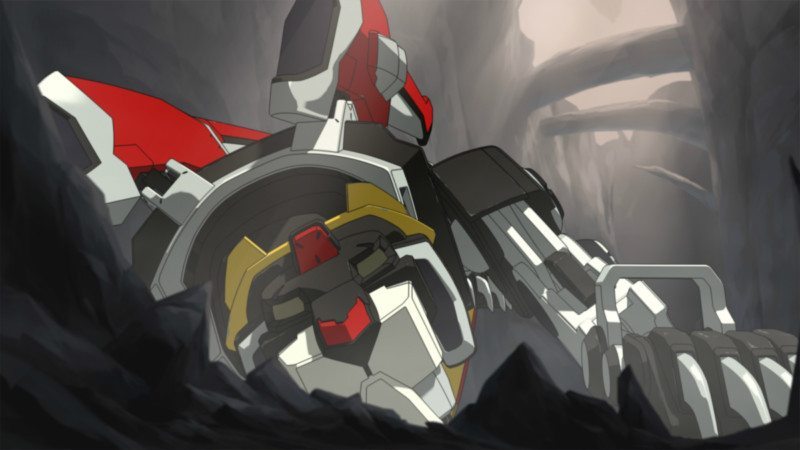 I went into VOLTRON: LEGENDARY DEFENDER with high expectations. Though I never watched the original series, the involvement of AVATAR: THE LAST AIRBENDER alums Lauren Montgomery and Joaquim Dos Santos piqued my interest, especially the way they talked about the reboot, citing their focus on characterization, more serialized storytelling, and intense fight scenes. These are things a lot of series don’t seem to do very well — some of which I’ve written about before — but I saw this as a promising sign that VOLTRON might be an exemption. And yet, while watching the first season I thought the show’s characterization and combat were hampered by odd and disappointing choices. My problems with the series were fairly consistent, and I wanted to explore them to project the changes I want to see most when VOLTRON returns later this year.

VOLTRON: LEGENDARY DEFENDER follows Shiro, Pidge, Keith, Lance, and Hunk—five Earth teenagers who are pushed to the forefront of an intergalactic conflict caused by the Galra Empire. After discovering five robot lions, they find themselves in a position to defend the galaxy, and come together to form Voltron to face the increasingly dangerous enemies the Galra sends their way.

It’s a premise ripe for fun characters, and VOLTRON: LEGENDARY DEFENDER certainly delivers on this front. But the show often makes the mistake of prioritizing tropes at the expense of “real” characterization. For example, “The Rise of Voltron” very quickly establishes Lance as the “unknown rival” of Keith, a former space cadet. The trope is hinted at when Lance sees Keith and says, “That guy is always trying to one-up me,” and seen fully when Keith asks, “Who are you?” after Lance first appears before him. All of this feels very in character for the cocky and humorous Lance, especially since we’re just being introduced to him. However, this changes later in the episode. After Sendak’s ship sets a tracker to the Castle of Lions, Lance responds to Allura’s question of “How did they find us?” with, “I’m not sure…but I bet it’s Keith’s fault.” Instead of allowing the severity of their circumstances to dictate how the character should act, the show chooses to have Lance get on Keith’s case for something he clearly had no part in, to no particular end. It could be argued that Lance just felt that inadequate from only making fighter pilot because Keith flunked out, but there wasn’t any build up to explain why he wouldn’t rather help with their situation. 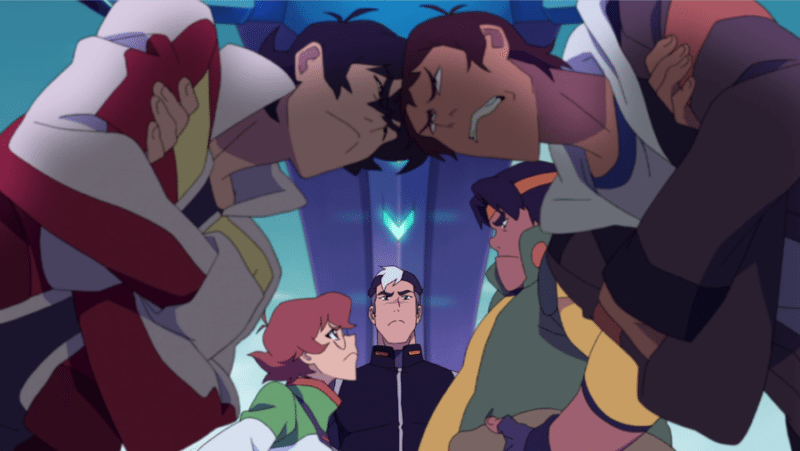 This problem of advancing trope over character is seen again with the “casanova wannabe” trope in “Taking Flight.” Prior to the episode, Lance has been shown to think of himself as a ladies’ man, hitting on Princess Allura several times with no success. So at a glance, him letting Nyma into the Blue Lion because she flirts back isn’t that sketchy, even if it does make him seem a bit daft. But this action disregards the fact that Team Voltron had a huge security issue in “Fall of the Castle of Lions,” the consequences of which Lance just recovered from. It’s frustrating when writers seem to have a limited understanding of their characters, or when they refuse to let them change and react realistically, but shows have been able to move past forced, trope-based characterization before (see JUSTICE LEAGUE). Hopefully, VOLTRON: Season 2 can do the same for all of its protagonists, as Lance isn’t the only one who got mishandled in Season 1.

There is nothing inherently wrong with the deus ex machina, “when some new event, character, ability, or object solves a seemingly unsolvable problem in a sudden, unexpected way,” according to TVTropes. Being surprised is one of the many joys of stories, and when done right, deus ex machinas are mostly invisible. But they get a bad rap when they’re introduced without set-up and not given later explanation (like Gipsy Danger’s sword in PACIFIC RIM) and when they’re used over and over again (like the eagles in THE LORD OF THE RINGS and THE HOBBIT films). VOLTRON: LEGENDARY DEFENDER, unfortunately, falls into both of these traps. 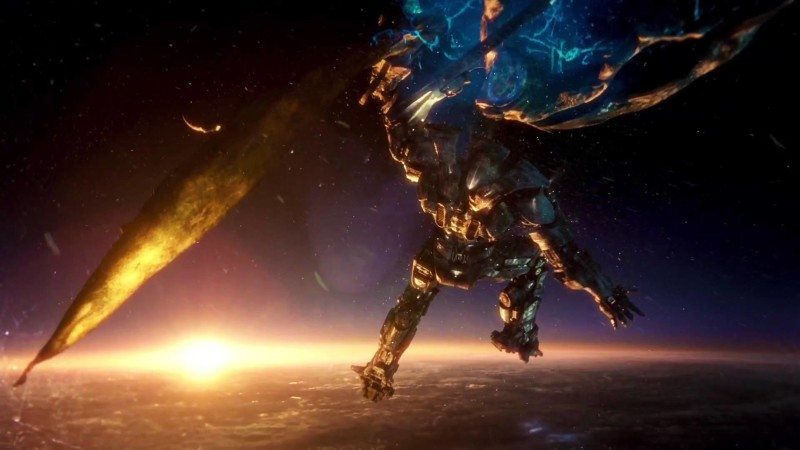 In their two fights against Robeasts in Season 1, Team Voltron wins because one of the Lions tells a Paladin what to do, said Paladin jams their Bayard into a control panel, and Voltron gains a new weapon. Keith’s battle against the big bad of the series, Emperor Zarkon, even showcases the Red Lion forming a new weapon on the spot to temporarily keep him at bay, seemingly all because of Keith’s willpower. When all of your important battles rely on deus ex machinas instead of any measure of wit, skill, power, or luck, the stakes and tension of your fights are completely lost. In the case of VOLTRON, it also calls into question the need for a pilot at all, let alone five. If the series is going to have any chance of making us wonder if our heroes are “going to make it out alive,” as Dos Santos promised, VOLTRON is going to have to start putting the responsibility of winning fights on the protagonists, rather than the poorly defined capabilities of their Lions.

RELATED: Read about the unintended misogyny of PACIFIC RIM.

In addition to my issue with the way some fights end in Season 1, I also had problems with the fights themselves, specifically their speed. Take the shots of Sendak’s metal arm rising and descending on Shiro in “Fall of the Castle of Lions”:

Not only does the action of Sendak’s arm rising seem a little slow, when we next see Shiro he’s already on his feet, and Sendak’s arm doesn’t even come close to hitting him. For comparison, look at how TOKYO GHOUL handled the fight between Kaneki and Jason (starting from the moment you see Jason’s kagune flailing until it slams into the chair):

The rise and fall action in TOKYO GHOUL takes fewer frames than in VOLTRON (45 compared to 65), and GHOUL’s closer shot of the impact zone helps convey a sense of immediacy and power by not allowing us to see the kagune coming. In case you think VOLTRON was simply going for something else with this particular scene, there’s 54 frames of contact when Shiro’s hand trails along Sendak’s arm, contrasted with 24 frames of sword-on-sword action in SWORD OF THE STRANGER. (SWORD OF THE STRANGER even adds an extra shot halfway through the sword contact to keep things moving quickly.)

VOLTRON’s issue with speed made me think of the “Satoshi Kon – Editing Time and Space” episode of EVERY FRAME A PAINTING. In the episode, Tony Zhou explains that Kon didn’t want to work in live-action because his editing was too fast, comparing the 10 frame animated insert of a note in PARANOIA AGENT with the 49 frame live-action insert of a toy (I think it was a toy) in ROBOT & FRANK. “Kon felt…that he could draw less information in the shot so your eye could read it faster,” Zhou narrates. And indeed, VOLTRON’s battles tend to have very little going on in the background. But the way shots in the series linger on screen makes it seem like the show is being overly cautious, ensuring that they register before moving on. VOLTRON doesn’t need to follow Kon’s example completely, but taking full advantage of the benefits of animation will make the show’s beat-to-beat action feel much tighter.

RELATED: Looking for something to watch after VOLTRON? Consider giving YOUNG JUSTICE a go.

These aren’t the only problems I had with the first season of VOLTRON: LEGENDARY DEFENDER. The Balmera storyline felt prolonged, and the season had a few somewhat unnecessary plot points, particularly in “Return of the Gladiator.” But the show’s issues with characterization and action were the problems that made the series feel kind of average. Perhaps the most reassuring thing about VOLTRON’s first season is that it ends abruptly, as if they had a 22 episode season planned out and released the first half to give the rest some more polish. Not that they can go back and change things because animation takes forever, but it’s hopefully a sign that a lot of my issues with the series were just growing pains. In any case, I’m definitely curious to see how VOLTRON’s universe and mythology are expanded in Season 2, because if Darkslover’s speculation is even close to the mark, we’re going to be seeing some really heavy scenes.