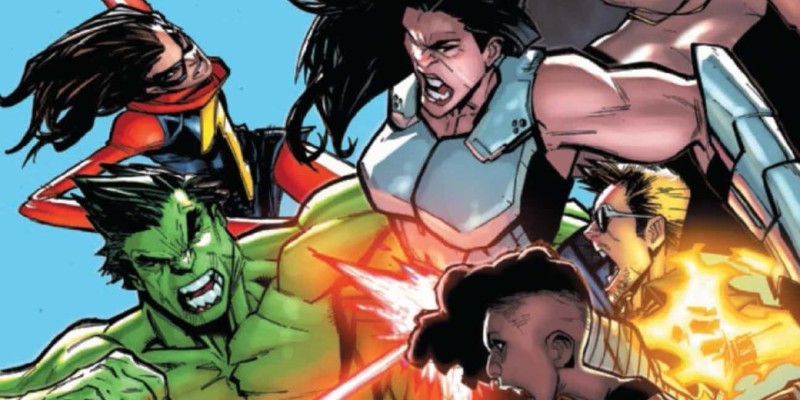 The Champions are a superhero team of and for Millennials, fostering the youthful belief that our actions can make a positive difference in the world. It is very much an idealistic narrative, but also one that is selfless and done with good intentions, reflecting the mentality of a generation that wishes to take up more progressive action in order to make the world a better place. CHAMPIONS #7 furthers this narrative by forcing its characters to defend themselves from those who wish to tarnish their movement’s image, represented by both the Freelancers and their corporate benefactors. Underneath its generic battle of good versus evil, CHAMPIONS #7 manages to display the dark side of what a symbol can represent, as well as how such an image can be exploited for one’s selfish benefits.

After last month’s issue, the Champions now find themselves wrongfully framed for the physical and mental assault of two homeless men. Such an accusation causes a public backlash against our heroes via social media, setting back a movement that they had hoped was capable of bringing about positive change. Luckily, the Champions quickly manage to deduce the real culprit’s identity, having gotten a glimpse of the Freelancer’s (or as Amadeus puts it, “super-team of sadists”) tactics and M.O. from their previous encounter. Upon learning their current location and activity of ‘assisting’ the illegal evacuation of low-income housing residents, the Champions decide to confront the Freelancers in hopes of putting them out of business for good. However, little do our heroes know of the backup plan set in place by the Freelancers and their corporate clients, a plan that will set up a roadblock in the Champions’ movement.

READ: Like CHAMPIONS? Check out why Hulu’s THE RUNAWAYS could contribute to the breaking down of Millennial stereotypes!

As mentioned in our previous review, the Freelancers have clearly been established as a mirror-foil for the Champions by representing everything that the team stands against. They accept a crooked life of luxury in order to avoid dealing with the possibility of unemployment, at one point berating the Champions for performing acts of heroism for free. Their speech feels like the kind of dialogue one would expect from alt-right internet trolls, at one point using classic dog-whistle lines like “snowflake” and “safe space” to mock the protagonists’ selfless actions. But most of all, the Freelancers serve as muscle for everything that Millennial culture hates: establishment corporate elites who deprive regular people of their basic needs in order to line their own pockets. Where the Champions have gained power by acting independently of adult figures, the Freelancers have received theirs by enforcing the violent will of individuals from the Baby Boomers and Generation X eras.

While I will admit the Freelancers’ ethics can rub a bit too close to mustache-twirling at times, the established conflict between these two teams fits into CHAMPIONS’ theme of identity. The Champions don’t just want their name to be used as a group title, but rather a brand that anyone can use in order to make a difference. This is the gap between old and new that caused Spider-Man, Nova, and Ms. Marvel to quit the Avengers in the first place. Mark Waid is obviously making some on-the-nose references to the current political environment, with these characters recognizing that the adult heroes are too focused on proving that they are right, rather than acknowledging the concerns of the people they protect. We’ve seen the good such a mantra can do in the previous issue, with people sewing the Champions insignia onto their clothes and embracing the team’s principles in order to make a difference in their community. Yet as the issue with Gwenpool showed us, that symbol can be misrepresented and used for darker intentions if applied from a position of ignorance.

Once again, the artwork in this series truly shines, thanks in part to Humberto Ramos’ approach to character design. Each figure is drawn in a manner that makes them feel individually unique, never fading into the background or overshadowing the appearances of other characters. As a result, both the protagonists and antagonists receive enough time to do something on panel, making their appearance feel integral to the plot. There’s a wild vibrancy to this issue in Edgar Delgado’s use of color, making each scene per panel look deeply animated, but not so much that it borders on being too cartoony. Combine this with facial animation expressing the frustration and determination of its heroes — alongside the overconfidence and arrogance of its villains — and you have an art direction that CHAMPIONS connotes to claim as inherently its own.

READ: Here are our thoughts on why CHAMPIONS matters for Millennials!

While CHAMPIONS #7 uses old tropes dealing with faulty accusations, the story is engaging because our heroes have something worth fighting for. That something is their name, a symbol of hope and positivity that can be embodied by anyone who feels that he or she can make a difference to their community. And with outside forces wishing to use that very name to besmirch their image, I am more than excited to see how the Champions will learn to reframe their purpose in the issues to come.