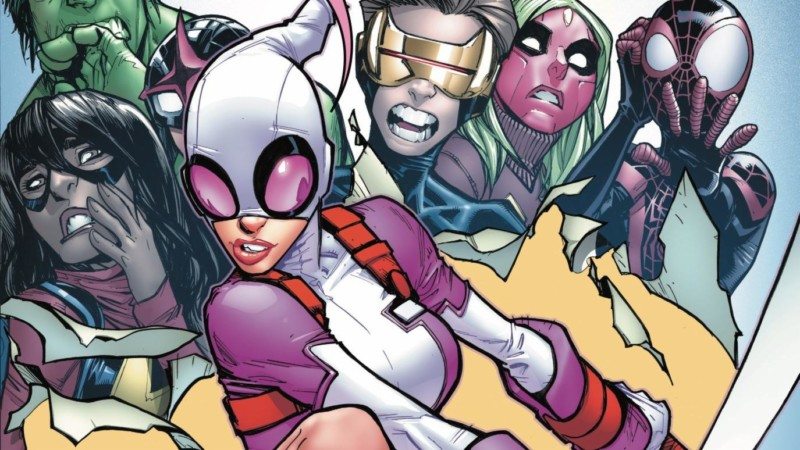 After a brief scuffle with the Atlanteans, the Champions return to land in CHAMPIONS #5 to provide assistance in a small Middle American town. Paralleling the numerous events of this past week dealing with bigotry, the Champions are forced to deal with a corrupt sheriff who’s as racist as they come. What’s interesting is that Spider-Man is absent from this issue, and is instead ‘replaced’ by Gwenpool for the time being. CHAMPIONS #5 touches on many important issues that have been recurrent in this series as a whole but falls just a bit too short when the opportunity to delve deeply into these problems presents itself.

Sheriff Studdard runs the police force in Daly County. The Champions have a run-in with him after they save various pedestrians from a burning building, and it’s clear that Sheriff Studdard was purposely slow in attempting to save the occupants. The Champions immediately confront the sheriff and call him out on the rise in racism in Daly County since his election. There’s an obviously suspicious connection between the fire and the sheriff, but before the Champions can cause too much of a fuss, Deputy Sims promises the Champions to look into the matter.

READ: New to CHAMPIONS? Here’s our review of the first issue!

Scoping out the scene is Gwenpool, who immediately causes a ruckus. Her bizarre mentality has her convinced the entire town is corrupted by a supervillain of sorts, whereas Ms. Marvel and the rest of the team have to tell her “corruption and injustice and racism can infiltrate authority structures all by themselves without a supervillain’s help.” These words don’t sit immediately with Gwenpool, but as a reader I found the message to be genuinely good in its simplicity. If the target audience for this series is on the younger side, it’s a good introduction to the harsh realities that face this world. The Champions go around town to stop discriminatory crimes taking place, and by the end of the issue wind up at the police station to talk with the sheriff and deputy about the development of the fire investigation. 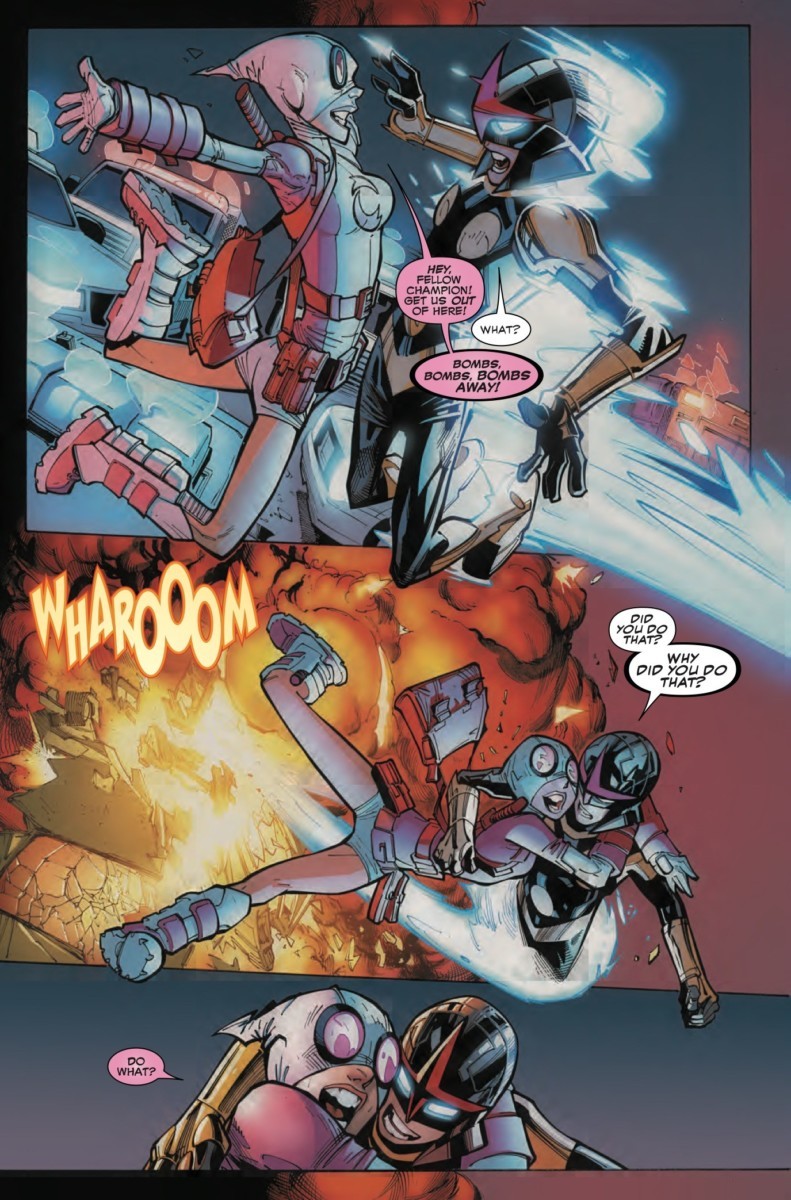 Overall I find CHAMPIONS #5 to be a good issue in the series. It follows the core values that started the team in the first place a few months back, and it effectively points out the racist tendencies tragically possessed by many people in the world. The idea of going to a Middle American town is a unique change in setting, and I really enjoy the smaller scale heroic acts that the Champions commit to. Again, this is why the team was made in the first place, and I find it integral that writer Mark Waid stays consistent with this. The inclusion of immediate, real world issues also makes this installment (and series) highly relevant. 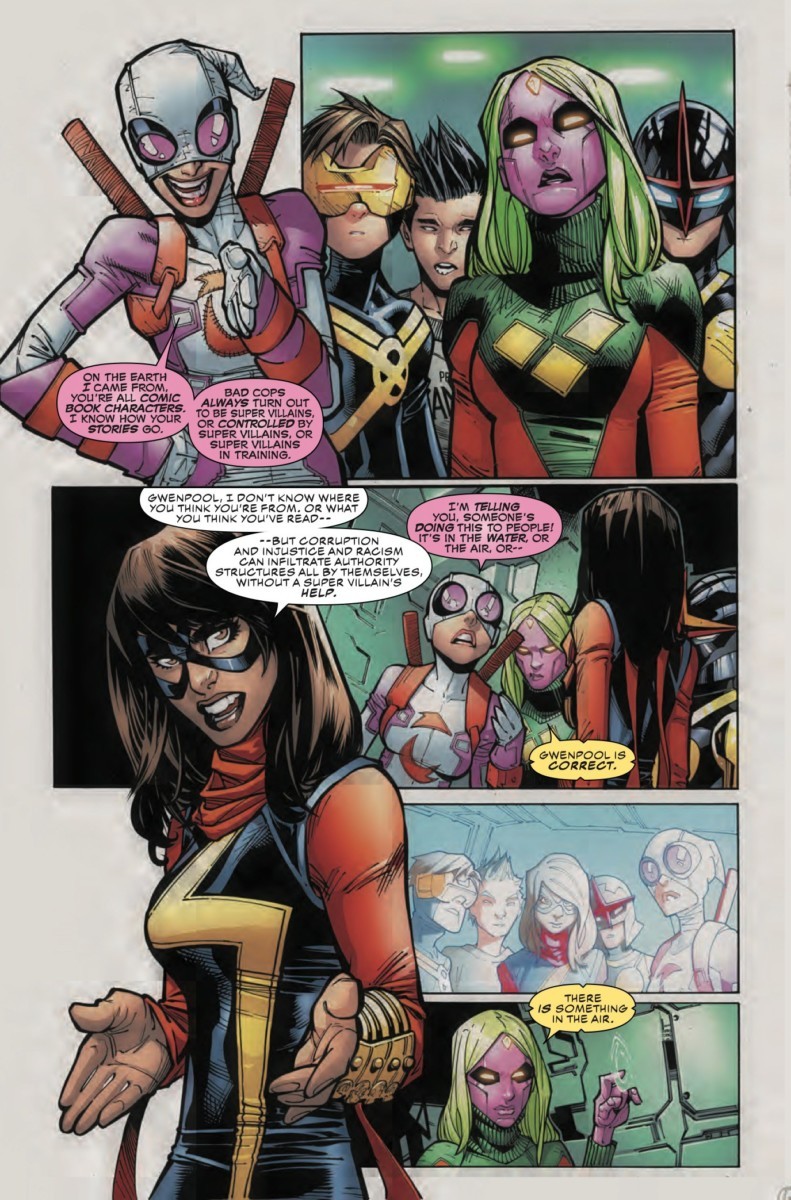 I’ve been digging artist Humberto Ramos’ drawings throughout the series, and in CHAMPIONS #5 he’s continued to impress me. With the addition of Gwenpool and the outrageous racism of the sheriff, the many exasperated looks on the faces of the team give them all a nice touch of humanity. I can’t speak for either of them, but the collaboration between Waid and Ramos appears to be a healthy one as all of these scenes are sequenced in an efficient and clear manner. Edgar Delgado’s colors continue to pop and bring the characters to life, especially with the likes of Hulk and Viv.

READ: Fan of Ms. Marvel? This is why diverse role models like her are so important!

One of my criticisms with this issue is the inclusion of Gwenpool. While her outlandish and foolish behavior allows the Champions the proper outlet to explain their overall accepting agenda, her consistent suggestion of punching rather than talking becomes tiresome. If she becomes a reccurring nuisance for the team then I could see her being effective, but for this particular issue, where the subject matter is a bit heavier, having Miles around would’ve done the story a little better. Truthfully, because I can’t see this story stretching beyond another installment, I wish Waid took his time and allowed a story arc to last three issues instead of rushing through it in one. There is a lot of room for the plot to expand in this story (exploration of the town, more acts of racism/protesting, etc.) that Waid chooses to not explore. He gets his point across, but it would be felt more deeply if he invested more time into the plot.

CHAMPIONS #5 persists as one of Marvel’s best team books. It’s too early to say it parallels DC’s Teen Titans, but the fact that Waid is staying true to his original agenda (looking at the issues dealing with people on a personal level) gives me high hopes. The team traveling from South Asia, over the Pacific Ocean, and now to Middle America provides a great opportunity for storytelling. The change in settings will hopefully develop these characters further, and I strongly believe if Waid spends a little more time on his stories and plot, we’re in for a strong and consistent run from this team.