CHAMPIONS debuted with an issue that saw this group of young heroes come together, hoping to be new sources of inspiration against the older generations of heroes. Issue #2 continues that story… by opening with a fun campfire cook out joke. 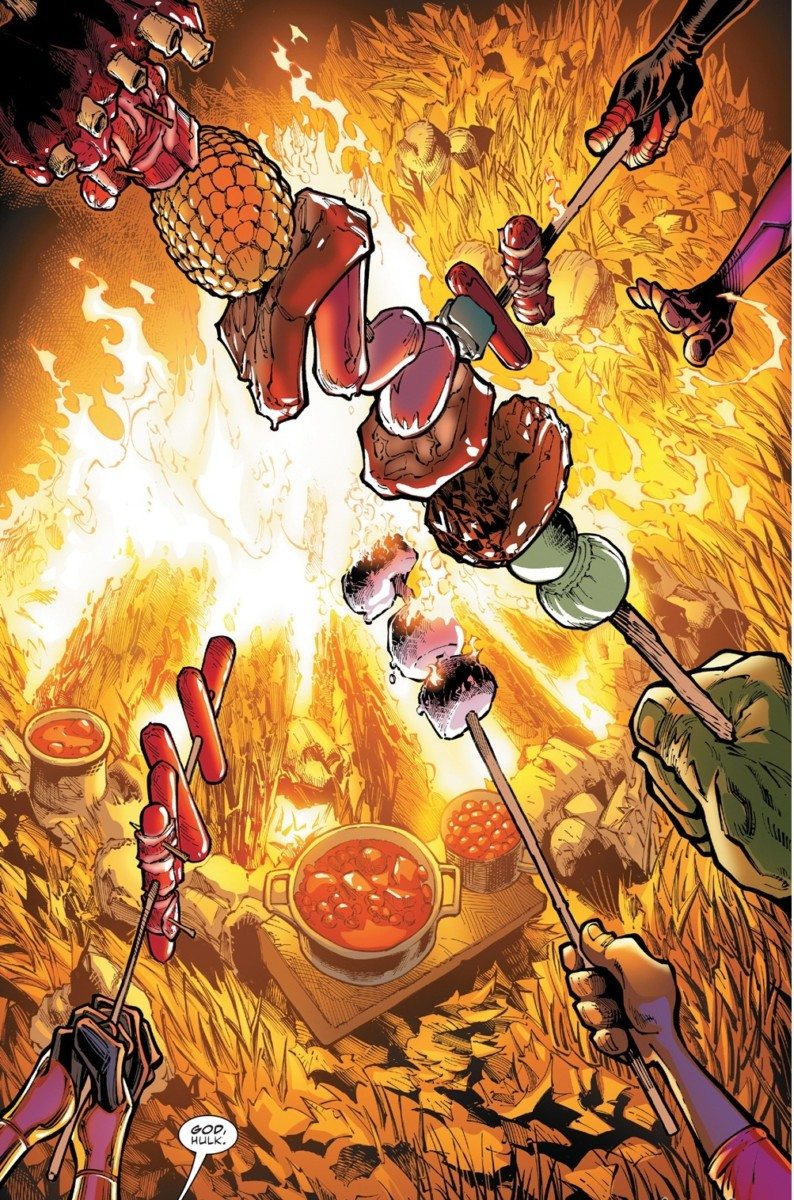 It’s not quite the expected start to the issue, but it’s a welcome one, as the group is attempting to bond and learn about each other in order to be a better team. This is a welcome dose of fun after the more serious tones of the previous issue, and it continues to place the Champions in the vein of DC’s YOUNG JUSTICE comic series. The new setting allows the young heroes to quickly establish their group roles–Ms. Marvel is the leader, Hulk is the full-of-himself charmer, Nova is the geek, Spider-Man is somewhat unsure of the whole idea, and Viv Vision is… well, the foreign exchange student. Its also interesting to see how the members each adapt to their new roles. Ms. Marvel is quickly able to stop Hulk’s teasing and avoids the cliché of being the girl/spoilsport, when she reminds everyone why they are there (to go on great adventures and deal out justice). Nova admits to only having powers thanks to his helmet (which Hulk takes advantage of) but he returns the favor quickly when he’s asked to demonstrate his abilities. 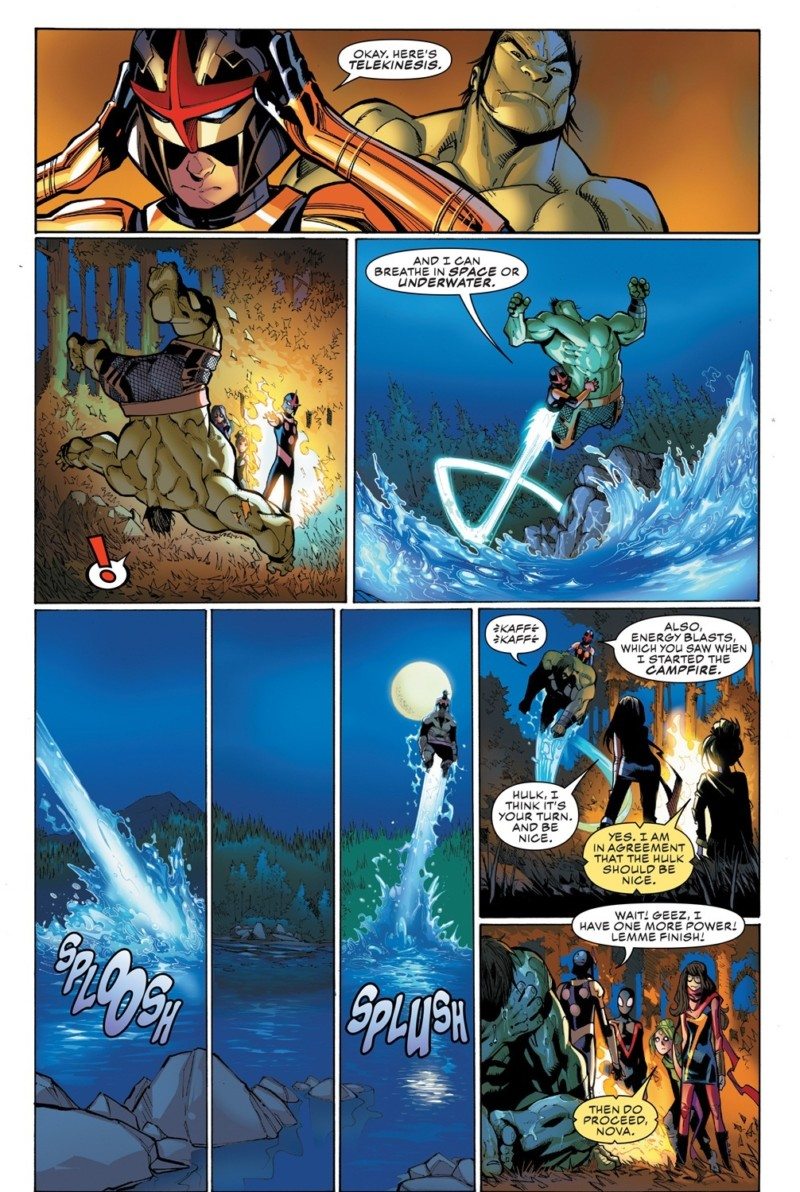 This sequence is a great example of how well Humberto Ramos’s art gels with this book. The art flows from panel to panel, with everything popping out and feeling in motion. Of course, its helped along by Mark Waid’s strong and fun writing. Each of the teenage superheros feels genuine, with real personality and desires established quickly (no doubt due in part to Waid’s time writing IMPULSE for DC). There are some odd moments though. Hulk’s jock-style actions are somewhat contradictory to his being the “8th smartest person on Earth,” but could lead to some interesting personality quirks down the line. Spider-Man gets the least development, but its good to see him there as part of the group.

READ: Why CHAMPIONS matters so much to millennials.

However Viv Vision gets the most interesting bits of development, as she is scientifically interested in a kiss during a ‘truth or dare’ type segment, and causes some unintentional comedy when she mentions that she is a living server (her password being ‘evenanandroidcancry’ apparently doesn’t stop the others from logging on).  But her reaction to the suggestion of ghost stories is quite unexpected. 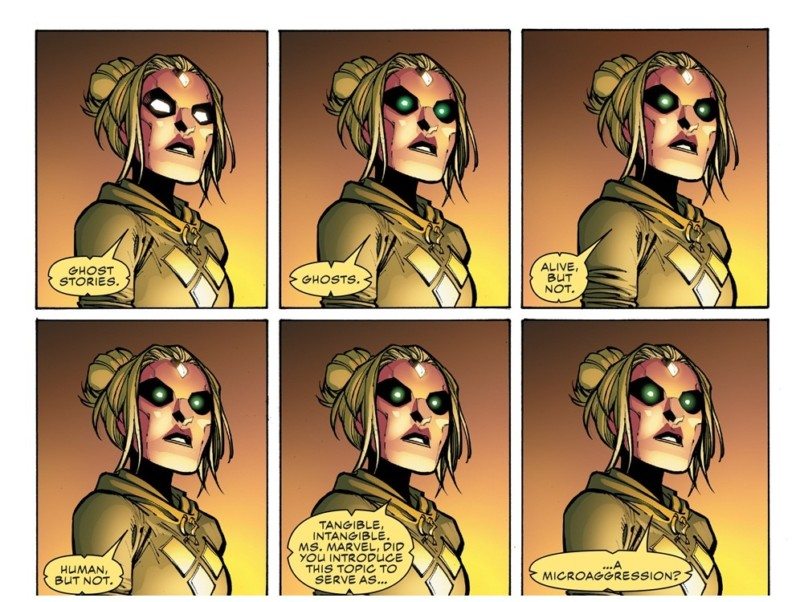 It’s a good burst of personality from a character that is to varying degrees a computer, and its interesting to see Kamala Khan accused of being insensitive.  Of course, the surprises keep on coming as young Cyclops is suddenly revealed to the group. Cyclops stands as the Champions’ first real test of their ideals–on one hand, he’s a younger version of a character that went bad. On the other, he’s a young hero that doesn’t want to be judged by the standards of his predecessor, which is largely what the Champions want. So it’s good to see him cooking on the campfire just before the… unexpected ending, which needs to be read, not described in a review.

Overall, CHAMPIONS #2 is a good second issue. While there are questions from the first issue that aren’t answered yet (how the team plans to operate, what type of crimes they intend to fight), it’s good to see how well they operate in a causal setting. This feels a like a team finding its way and taking smart baby steps to get there, especially during their debate on Cyclops. Some things can be improved upon–Hulk’s jock mindset could easily become annoying, and Spider-Man just seems to be there for the sake of being there. Ms. Marvel’s vision for the team might also become a problem as she pushes along down the road.  However, for now, this is a fun issue that continues the story in a lighter mood, while still showing the ideas the Champions are supposed to represent.  It also shows the group slowly devolving their morals and ideals, which feels in tune with the idea of this millennial-centric team. Most importantly, it keeps us as interested in figuring out those ideals as the heroes are.