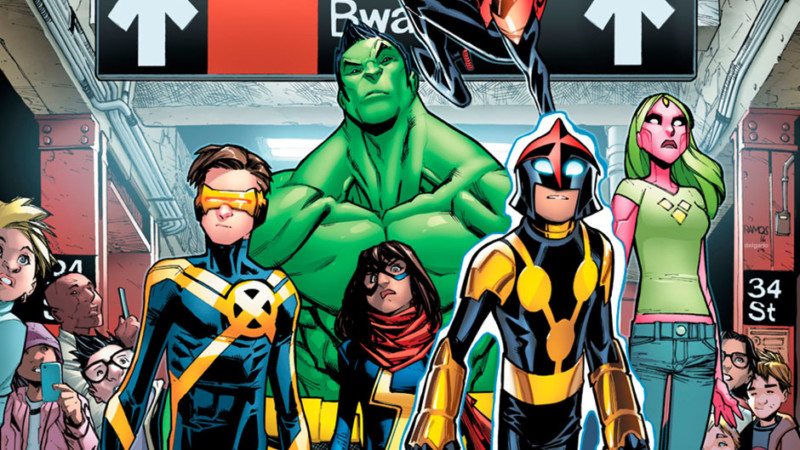 The Champions (or as a bunch of angry conservatives will call it, the new PC Avengers) is a team for a new generation: one that embraces diversity and wishes to make a difference in the world. Like its modern audience, these heroes have realized their elders have feet of clay, constantly fighting with one another rather than working together to make a positive difference. In some ways, this is definitely a reflection of the world in which we live in, with millennials wishing to make progressive change that benefits everyone without damaging the status quo, rather than arguing back and forth on issues that should unify people instead of divide them. If CIVIL WAR II was yet another example of the “same old, same old” routine, then CHAMPIONS #1 is its counterpart: a sign that the kids are learning from their mentor’s mistakes and taking a stand to do what’s right.

Taking place at an unspecified time after the events of CIVIL WAR II, the superhero world is torn apart and public trust in heroes is once again on shaky grounds. Disillusioned with the decisions made by the adult heroes’ in regards to one another and the civilians caught in the wake of their battles, Nova, Ms. Marvel and Spider-Man (Miles Morales) have left the Avengers. Now, wanting to both fight the bad guys and actually do something about the people they’re supposed to defend, the trio decides to team up and form their own band of heroes. Joining them is Amadeus Cho- the new “totally awesome” Incredible Hulk, as well as Viv, the Vision’s daughter, both of whom share the same goals in making a difference and spreading hope at a time when it is most needed. It’s your standard “assembling the team” storyline, but because of the dynamic shared between all of these characters, it genuinely feels like the building of something important.

READ: Read how Nova, Spidey and Kamala joined the Avengers in ANAD AVENGERS #1

As mentioned above, what makes this first issue of the series work so well is how Mark Waid builds upon the chemistry between our main cast to promote CHAMPIONS’ message. The relationship between Ms. Marvel, Nova and Spider-Man has been solid since their time spent together in ANAD AVENGERS, allowing us to watch them grow up and feel confident in their abilities as a team. They share banter with one another, relate to each other on similar issues, and above all, just want to make the world a better place. They recognize exactly what others have failed to recognize since the first CIVIL WAR comic: infighting between heroes doesn’t have a winner, just unnecessary fighting and a loss of trust amongst one another. And, while the additions of Hulk and Viv can feel a bit rushed, they still share this same sense of idealism that the other three wish to share with the world.

However, despite breaking away from adult authority, these characters still channel the same set of beliefs that made teams like the Avengers a beacon of hope in the first place. They are still dedicated to fighting crime, but they also recognize that being a hero means having the responsibility of helping everyone. You can’t just toss a bad guy into a building or fight in the streets and not take some responsibility for the damage involved, both to property and to casual civilians. In their minds, it almost feels like the adults just don’t care anymore, wanting to win back the public’s approval but not taking the steps that would regain it. Hell, Kamala flat-out acknowledges that in the outcome of this recent conflict (winner not mentioned), neither side seems to be interested in mending the bonds that were broken. This is definitely reminiscent of how we as millennials see the world, wanting to make a difference for the simple reason of it being the right thing to do, yet constantly frustrated at authorities who argue with one another over things that should have both sides working together (example A: our current election). Like them, we want to help and make things better for everyone, but the world is trapped in the webbings set by previous generations of conflict. And as the issue’s ending shows, our character’s actions appeal to the new generation, wanting to stop the problems of this world without succumbing to the mistakes of the past. 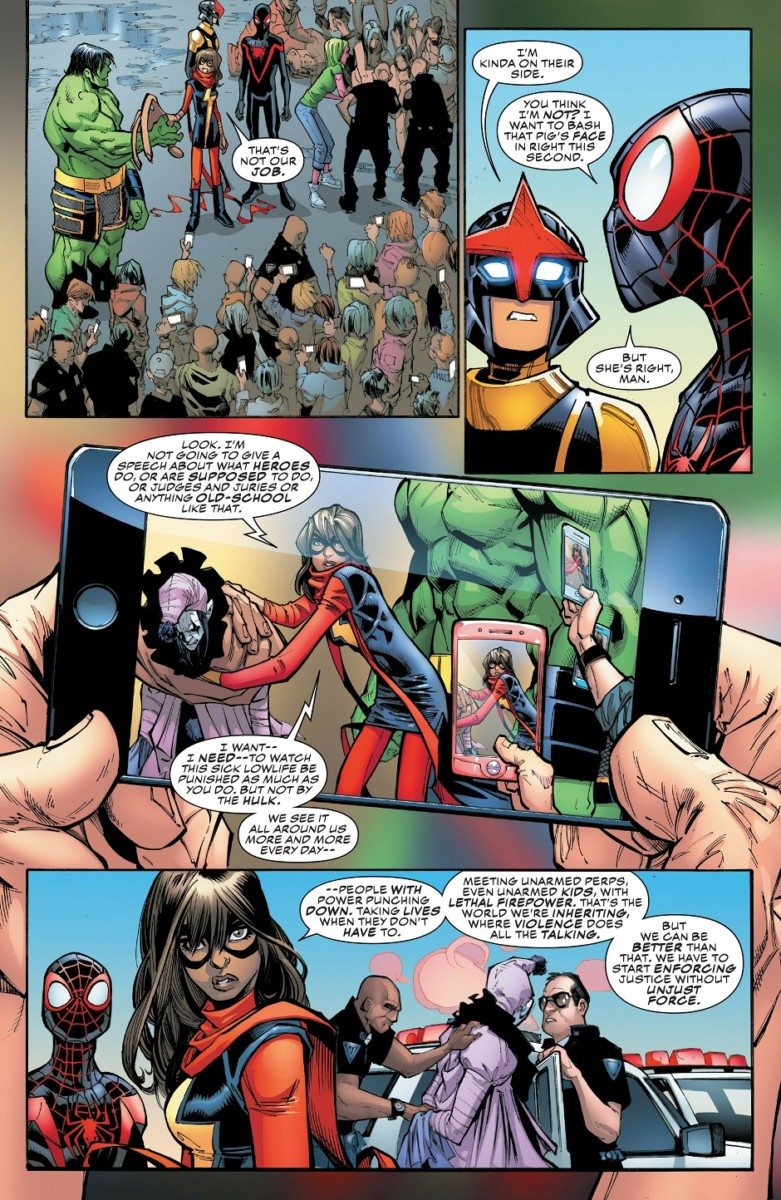 As for the artwork, I definitely like it, but I wish Humberto Ramos would just pick a style and stick with it. CHAMPIONS #1 seems to jump between two different art styles: a very detailed and realistic one that is most notable in the issue’s opening pages and a realistic/cartoony balance in other sections, such as the battle in Baltimore. Neither of these two art designs are terrible, and in fact, I am definitely a fan of them both. They present a remarkable amount of texture and expression that suits how these characters should look and behave. However, this use of varying styles can sometimes feel rather distorted, especially in the panels where certain character reactions look like they were freeze-framed. Luckily there’s plenty of time for Ramos to get more comfortable with the series, but I’d like to hope they get things worked out within the next issue or two.

READ: Check out our trio of Avengers have a team-up of sorts in MS. MARVEL #7

CHAMPIONS #1 is a great first issue for Marvel’s latest team of heroes, as well as a great counterbalance to CIVIL WAR II’s aftereffects. Does it have its problems? Yes, but they feel relatively minor in the grand scheme of things, never getting in the way of the heart and soul of our characters’ goals. It’s a diverse and empowering team for a new generation of readers, promoting a message that I think everyone can get behind.