My first ever video game was POKEMON SILVER for the Gameboy Color. I was seven years old and so excited to be a hero just like Ash Ketchum on TV! At the beginning of the game, the professor asked me, “What is your name?” I put in “MADDY,” because that’s my name and this was going to be my very own POKEMON adventure.

One day, while I was playing my game outside, a group of older boys looked over my shoulder and started laughing. “You gave your trainer a GIRL’S NAME?!” they shouted, like it was the funniest thing in the universe.

“You can’t give a BOY a GIRL’S NAME! Start over. Plus your Pokemon suck anyway,” they said, trying to snatch the Gameboy out of my hands.

Fun fact: there was no option to be a female trainer back in POKEMON SILVER.

READ: Here’s an article all about agency in video games!

Over the years, I’ve had many other…less than pleasant experiences as a female gamer. And yet I keep coming back to video games. I think they’re a totally legitimate art form that can do things no other medium can. And I’m not alone in this. 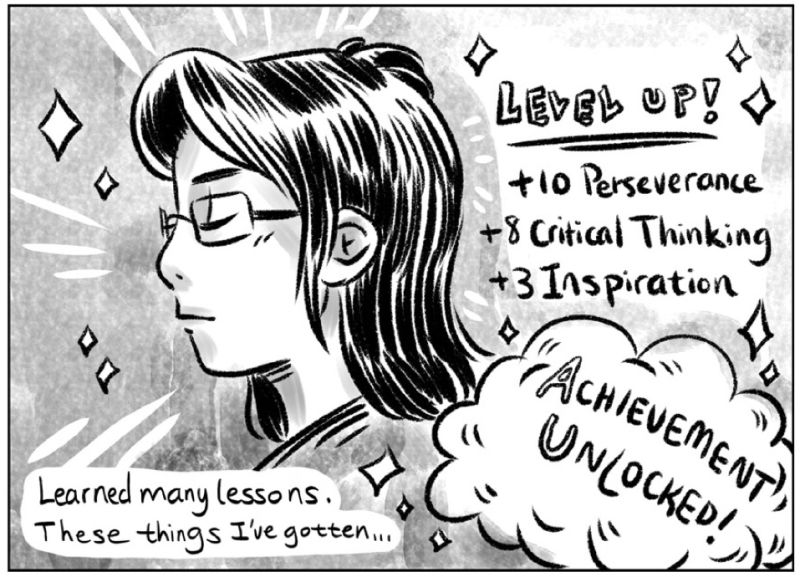 Hazel Newlevant’s CHAINMAIL BIKINI: THE ANTHOLOGY OF WOMEN GAMERS contains comics by tons of female artists about their own experiences with gaming. These are transgender lesbians, first-generation Chinese immigrants, women with OCD, and so on, discussing everything from ANIMAL CROSSING to Live Action Role-Playing games.

The common thread is the many ways these creators find gaming to be simultaneously freeing and constricting, all at once. Even though the gaming world tries to limit their roles and keep them out of the community, they’ve found games themselves to have the potential to empower, explore identity, and build community.

For instance, in one of CHAINMAIL’s comics, “Battle For Amtgard,” Maggie Siegel-Berele talks about how she keeps going back to the same Live Action Role-Playing game, even though she and many other women are consistently harassed at events. 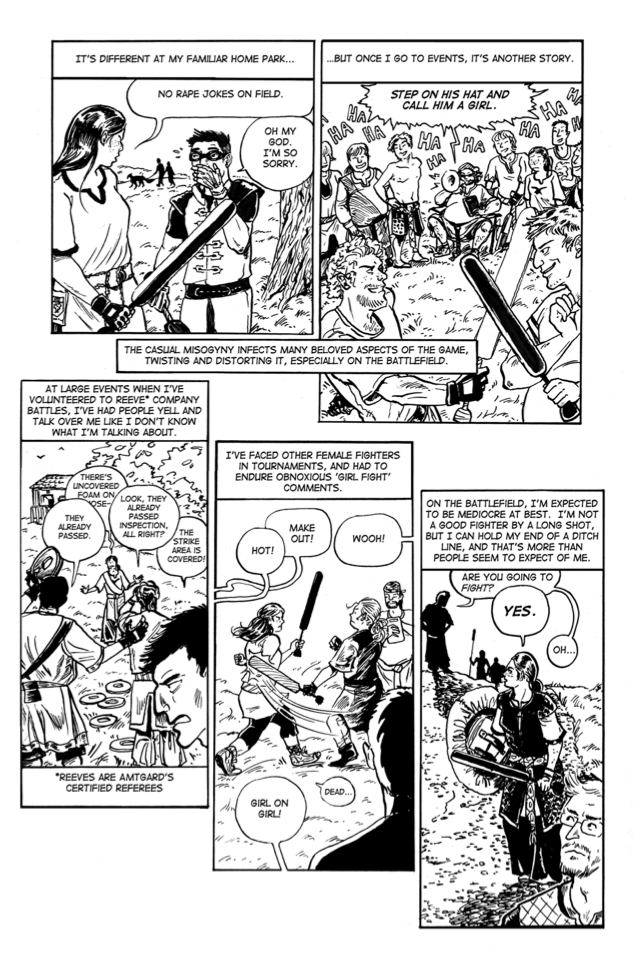 The rare women who are there are tough as nails – they’ve trained her to fight and given her the self-confidence to believe she can succeed in battle. These are skills that extend far beyond role-playing. There are many other realms besides the battlefield where women are expected to fail. Through Siegel-Berele’s gaming friendships, she knows that she doesn’t have to lose just because everyone else thinks she will.

This expectation to underperform is not exclusive to Siegel-Berele. In “Project White Mage,” Sera Stanton discusses how she would always ignore the White Mage (the healer character) in games. She used to think attack was more important, and she didn’t have any time for the frilly, girly healers who never did any damage.

And yet, she says, “I thought, ‘If I were in an RPG party, I would be the White Mage; I’m frail and defenseless but I like to help others.’” Because of this, she devalued herself and kept herself isolated, as if she were the healer she despised.

It’s only after Stanton helps some suicidal friends recover and notices how much they truly depend on her that things change. She starts to think of the conventionally feminine task of healing as powerful and valuable. And she starts to think of herself in those terms as well.

The way healing gets dismissed as “women’s work” shows up in other CHAINMAIL comics too. “Pretty Paladin Critical Missy,” created by Becca Hillburn, starts with a cleric magical girl confidently doing battle with a monster. As she prepares to defeat him and take the spoils and exp for herself, it cuts back to real life where there are a bunch of girls playing DnD. Everyone is yelling at the girl who plays the cleric to stop battling the monster and instead heal the rest of them and let them get the “ill-gotten gains.” She just smiles and ignores them, taking what she earned for herself. In the final panel, it says “+10 swagger.”

What’s awesome here is that everyone is telling the main character that, as a healer, she is supposed to be subservient to the other players and never take any credit for her work. However, she rebels and forces everyone to give her conventionally feminine character the rewards she deserves. In this way, she uses gaming to reclaim value for her own femininity.

Similarly, in “Gamer Grrrl,” K.A. Kelly-Colon utilizes MONSTERHEARTS to reclaim the right to explore her own gender. This comic continuously cuts back and forth between the rigid, sexist world of high school, where everyone views Kelly-Colon as a straight man, with the far more liberating world of MONSTERHEARTS. 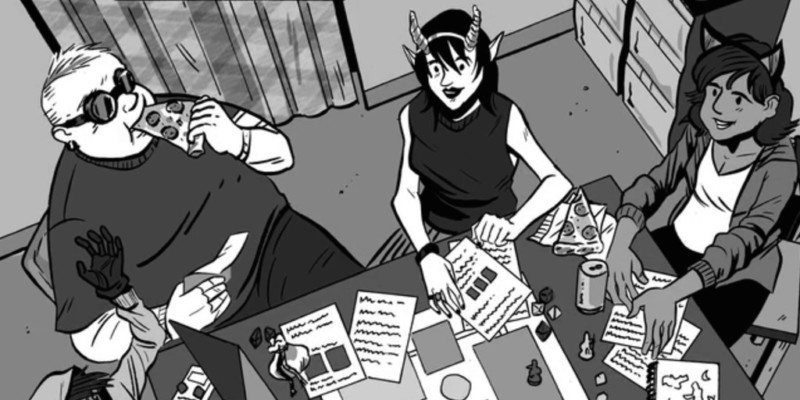 Here, Kelly-Colon gets to be treated not just as a woman but as the exact kind of woman she wants to be. In the “real” world, women are lingerie models on giant advertisements. In MONSTERHEARTS, Kelly-Colon is a strong demoness who cuts off the hands of rapists. Not only does the game aide her in transitioning, but it also provides refuge from patriarchy and space to envision new ways of understanding what it means to be a woman.

READ: CV discusses GLITTERBOMB and whether gore can be feminist!

When talking about games, we tend to think that female gamers detract from the conversation. However, time and time again, the comics of CHAINMAIL BIKINI have shown so many insights into gaming that are rarely discussed. If anything, female gamers have a lot to add to and improve about the discussion of video games as art.

One of the last comics in the anthology, “Achievement Unlocked” by Jade F. Lee, starts out by illustrating all the ways people dismissed Lee’s knowledge of games while she was working at GameStop. She then goes on to describe all the things she has learned from games as an Asian woman. 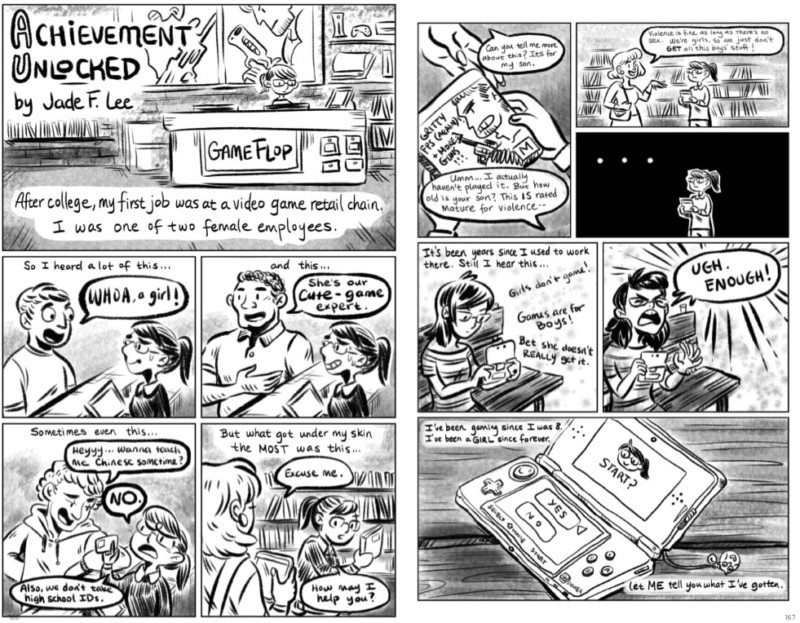 For instance, when her father refuses to let her study art in college, she uses SHADOW OF THE COLOSSUS as a way to strengthen her determination to stand up to him and pursue her passion. When dealing with a bad break-up, she uses MASS EFFECT to maintain her independence. Video games have provided her with deep knowledge, and even if people might try, they can never truly take that away from her.

Being a girl gamer is hard. There are countless people who will use games to limit you. Still, games taught Siegel-Berele to learn skills she thought she could never learn. They got Stanton and Hillburn to respect their femininity, and they provided Lee and Kelly-Colon the independence to become their best selves. And games got me to feel like a hero, no matter how many smug boys told me I could never play that role.

No wonder no one wants women to play them!