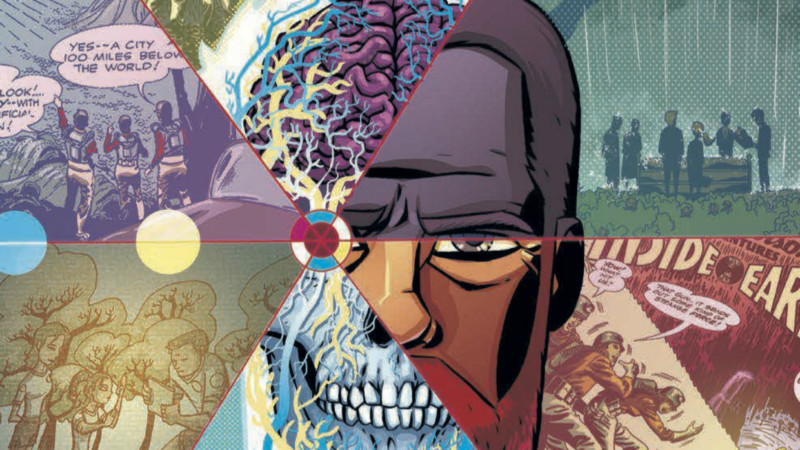 Not All Heroes Wear Capes

DC’s YOUNG ANIMAL imprint is made up of aliens from other planets, a troubled rich youth, the superheroes no one wants to be, and an underground explorer. Basically, the C or D-List of DC’s long and thriving history. The losers that never really got their foot in the door. The series that either never was or collapsed after a short period. Gerard Way picked these heroes up, the misfits and rejects of the past, and created something new and original. Out of the basement of DC COMICS history, Gerard Way came across Cave Carson and created the coolest comic book name out there, CAVE CARSON HAS A CYBERNETIC EYE. YOUNG ANIMAL has shown to be an outgoing imprint from the start, and Cave Carson continues in the psychedelic out of this world style in not only the artwork but storytelling as well. This is something that we haven’t seen too much of in many modern comics.

Cave Carson Has A Cybernetic Eye

To start, Cave’s first appearance was in BRAVE AND THE BOLD #31 in 1960. Created by writer France Herron, who worked with MARVEL in his early days, and artist Bruno Premiani, who was the co-creator for the original DOOM PATROL. Cave Carson has popped up numerous time in background news reports in DC stories. Having appearances in CRISIS ON INFINITE EARTHS, FINAL CRISIS, and JUSTICE LEAGUE: CRY FOR JUSTICE just to name a few. Volume one of CAVE CARSON HAS A CYBERNETIC EYE is complete, and new issues continuing the story are running monthly right now. Written by Gerard Way and Jon Rivera, art by Michael Avon Oeming and Nick Filardi. This new series is in every way an exciting, vibrant, extraordinary blast from the past!

If saying the title doesn’t put a smile on your face, try saying it five times as fast as you can. Starting off, page one is a tripped-out flashback of some sort, setting the tone and the mood of the book immediately. A tribe of people is trying to bring Cave towards them. As bright and exciting as the story may seem, we then switch the mood to a tragic note. Beginning with the funeral of Cave’s wife, Cave and his daughter ready themselves for the burial.

This sets the stage for Cave’s depression and what leads him to go back to his job at EBX (originally called E. Borsten & Sons in past issues). A panicked Muldroogan warrior then visits Cave, grabbing at him with fear and telling Cave something about EBX. In an instant, the Muldroogan mutates into a grotesque green creature and attacks Carson. Now, Cave must discover what EBX has been up to, save an underground civilization, and rescue his daughter.

So far, not much is known about EBX other than that the company created Cave’s vehicle. The Mighty Mole is Cave’s version of the Batmobile, a tripped-out machine that can bore through the Earth faster than any drill. Finding these few and spread out appearances of Cave have been fairly difficult. It appears that Gerard and Jon kept the continuity from these past stories instead of completely starting from scratch.

Now, previous DC books never addressed where the cybernetic eye came from, which left plenty of creative room for Way and Rivera. The second issue, however, starts to reveal the origin of Cave and his mysterious eye searching for the trail of a Magma Troll near the city of Muldroog. The underground city of Muldroog is new to the DCU. Their appearance shows them having rituals, leaders, and war paint. Muldroog appears at first as a third world tribe to the readers, but we find out they’re quite scientifically advanced after learning more about the tribe’s deep history.

So far, Carson’s life has been interesting from what we do know. Most notably, some events of Cave’s past installments that are mentioned in the book. Such as when Cave first stole the Mighty Mole and the time he met Superman. Also, the series mentions that Cave has been a teacher, scientist, father, hero, thief, and, primarily, an underground explorer for minerals. Now, this might seem like a lot to catch up on but, since this series feels like an old WEIRD SCIENCE FANTASY issue, it’s important that you’re brought up to speed on Cave’s history’.

Into The Cave, We Wander

In the beginning, Cave once explored the underground with his original team consisting of Cave Carson, Johnny Blake, Christine Madison, Bulldozer Smith, and Lena the Lemur. During his ten years of adventuring with them, he met his wife,  Eileen. Whom, as we find out, is Mazra Tolten P’Thrall of Clan Scoria, the heir to the throne of Muldroog. After falling in love with Cave, they married and began a life of adventures and added a new member to the family, Chloe Carson.

An abnormally large psychic worm attacked Chloe when she was only six years old. This caused Chloe to leave “Team Carson,” wanting a normal life. This created a distance between Chloe and her family. It’s also why her mother never revealed who she actually was. Chloe is a prominent figure in the story so far, being the only remaining bloodline to the throne of Muldroog.

Of course, for story purposes, EBX is a corrupted corporation — who would have guessed? It turns out that they’re creating a second Mighty Mole to go back and explore the underground. The head of the company, Paul Borsten, is hunting down Cave’s daughter and destroying the underground civilization of Muldroogs.

READ: Want more YOUNG ANIMAL? Take a look at our review of their newest series BUG! The Adventures of Forager #1!

Lastly, Cave Carson is full of DC lore and special appearances, plus some new additions to the universe. So fans of the CW television series ARROW may recognize the hockey-masked gunner, Bulldog. Also, a young Doc Magnus has a quick two-page appearance. Magnus in the DC universe serves as the creator of the Metal Men. There are also some unknown characters. Besides our main cast, the city of Muldroog and its people are fresh for the series.

Overall, the series is full of fun and wonder for any reader. The series is growing into something epic. With this first arc extending into volume two, the quest continues, and questions need answers! CAVE CARSON HAS A CYBERNETIC EYE VOL. 1: GOING UNDERGROUND will be available in comic shops and bookstores June, 20th 2017!