CATWOMAN: ELECTION NIGHT #1 from Meredith Finch and Mark Russell is out! It’s a strange yet entertaining mix of funny and dark. The issue is a Gotham City parody of the current U.S. presidential election, featuring Penguin playing the part of Trump and a woman by the interesting name of “Constance Hill” in place of, you guessed it, Hillary. Penguin’s nose is hilarious as usual, and in the issue he looks as if he could be a political cartoonist’s caricature.

The issue starts with a flashback to Catwoman’s childhood at Miss Kitty’s orphanage. Two girls, Jamie and Kelly, find Selina in Miss Kitty’s basement. They cut Selina’s face as they hold her down. She is only saved when her cat, Ali, attacks Jamie. Then, the comic moves back to present day. Selina, as Catwoman, finds out that Penguin is running for Mayor of Gotham. This is where the comic gets pretty hilarious — Penguin is giving a speech, talking about how he’s going to help Gotham. First, he says that he’s going to get rid of all of the criminals. How? He’s going to build a wall around Gotham. I was laughing out loud at this point. He then attacks his opponent, Constance Hill, for being a woman. He finishes his speech by saying that he’s going to “make Gotham great again.” Trump right on the dot, I’d say. 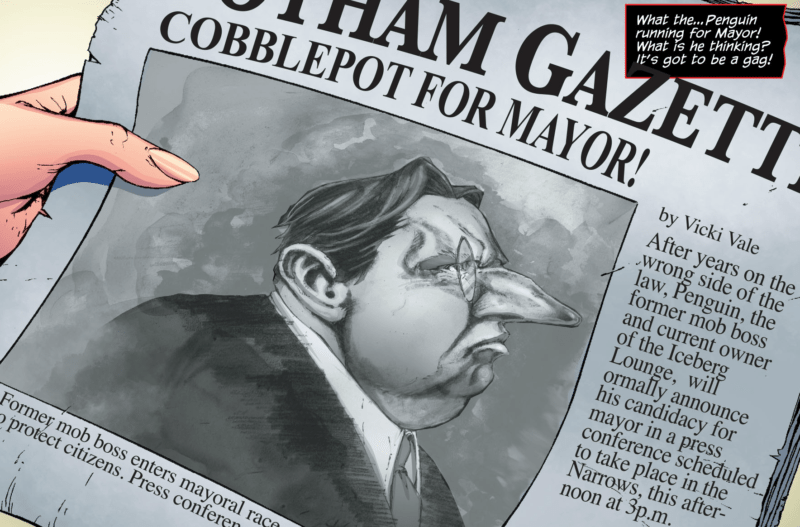 Constance Hill is introduced a few pages later. I’ll admit, I was expecting something different from the woman who represents Hillary. This is where my main qualm with this issue lies. Constance Hill, Penguin’s opponent, is practically as evil as Penguin. Now, many people would say that Hillary is just as bad of a person as Trump. People have called Hillary Clinton a crook, just as Constance Hill really is a crook. However, many minorities who Trump endangers would disagree with this. Hillary may not be trustworthy, but she is a progressive candidate nonetheless. Anyway, I digress — this is a comic book review, not a political article. If you read this issue and agree with the portrayal of “Hill,” then this comic really doesn’t have a lot of faults.

READ: Interested in more articles about the current election and comic books? Click here for an analysis of TOYKYO GHOST and Donald Trump!

Batman also makes a surprise appearance in this comic. He takes Penguin out of the race, leaving Constance Hill to Catwoman. He doesn’t stay long, though, and vanishes before Catwoman can say much to him. Batman’s very presence has a mysterious air, and his face, mask included, is only shown twice. It fits his vigilante persona, though; he appears, does what he needs to, and disappears. Except, in this comic, no violence is needed. His methods are merely political, and he uses files and papers as weapons.

CATWOMAN: ELECTION NIGHT #1 may have its light-hearted pokes at Trump through Penguin, but it really has its darker moments too. Jamie bullies Selina in several flashbacks that make up much of the issue. Bullied may actually be an understatement. Jamie cuts Selina’s face with a box-cutter, and later threatens Selina, telling her to make herself “scarce” the next day when a family will be coming.

Selina doesn’t realize what that threat meant until years later, but when election time comes she exposes the truth about Jamie and Constance Hill.  These flashbacks work to characterize both Selina and Jamie, and cause the reader to feel sympathy for Selina and disgust at Jamie. However, that is about as far as the characterization goes. The reader is left questioning why Jamie acts so extremely, as not many reasons are given. 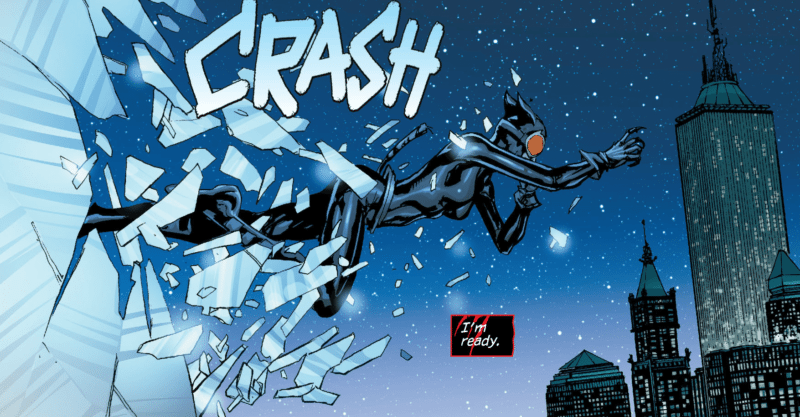 Shane Davis and Ben Caldwell’s art in CATWOMAN: ELECTION NIGHT #1 is dark as well — befitting its grim plot. Many of the scenes occur in shadows or at night, and nearly all of the scenes at Miss Kitty’s house take place in the basement. Character’s expressions are also very well drawn. In the scene where Jamie is cutting Selina, Jamie’s face retains its childishness while still looking downright evil. Selina, on the other hand, seems to embody innocence. She wears unimposing purple clothes and a matching bow on the back of her head that looks like cute little cat ears.

Overall, CATWOMAN: ELECTION NIGHT #1 was a pretty interesting and enjoyable read. It had its humor, and it had its dark moments as well; and importantly, both of these were done so well that neither seemed out of place. I may have personal disagreements with the representation of certain symbolic characters, but I don’t believe that this representation takes anything away from the comic itself. Both Catwoman and Constance Hill are strong female characters, whether they are morally good or not, and that in itself holds importance.

So, what did you guys think of CATWOMAN: ELECTION NIGHT #1? How do you feel about the way it represents the election? Let us know in the comments, and importantly, don’t forget to be civil!