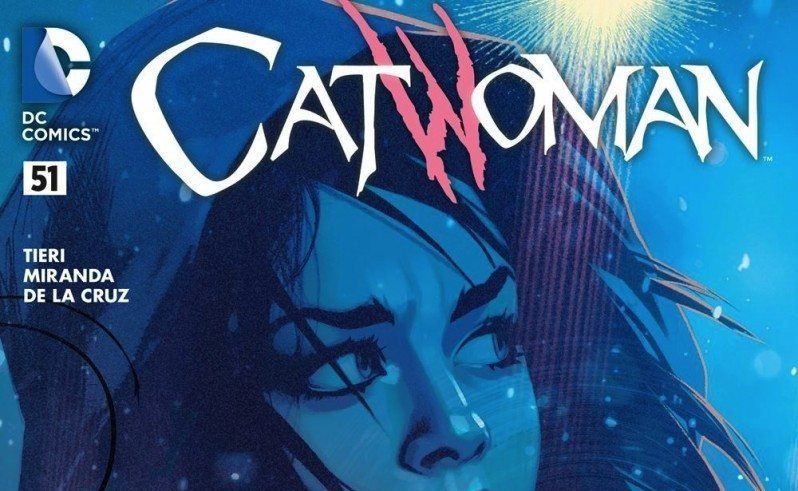 Catwoman has always been a memorable character, from Eartha Kitt’s early permutation to the manic and literal take by Michelle Pfeiffer to Anne Hathaway’s portrayal of a classy and resourceful burglar. It’s not surprising to see such fun interpretations of a classic antiheroine jump off the page and into films so readily as both adversary and love interest. It’s a personal pleasure to take a look at the most recent installation to CATWOMAN’s series to see what Frank Tieri and artists Inaki Miranda and Elia Bonetti are up to with issue #51, part one of her last New 52 run, “Faceless.”

I’m familiar with Tieri’s work for Harley Quinn and have been impressed by his believable portrayal and multi-dimensional personification of the female anti-heroine of Gotham City. Many have said that what makes Batman and Gotham City so compelling is the assortment of layered villains and “bad guys” with hearts of gold. Having reviewed both Poison Ivy and Harley Quinn recently, covering Catwoman’s closing statements in her last arc before the DC Rebirth felt appropriate.

LISTEN: Need more from Gotham? Listen to what we have to say about Scott Snyder’s BATMAN in this podcast!

With that in mind, Tieri successfully ties elements of Catwoman’s history—and what makes Catwoman Catwoman—into a story that promises both cat burglary and the settling of old scores. On top of that, it’s nice to see Selina Kyle fit her Catwoman suit without overdoing the curves. While it has always been tempting to accentuate the seductive femme fatale elements of her personality—especially opposite the likes of Batman— Miranda and Bonetti portray her exactly as one would expect a cat burglar to dress. Her suit is more for utility and convenience than sex appeal. I personally like the lights at the end of her fingertips—never seen Catwoman do that, before! On an art design level, not only does this issue hold the aesthetic of  a classic superhero comic, but it is also unafraid of using creative panels and interesting color schemes between scenes. Miranda and Bonetti are a clean and effective art team, for sure. 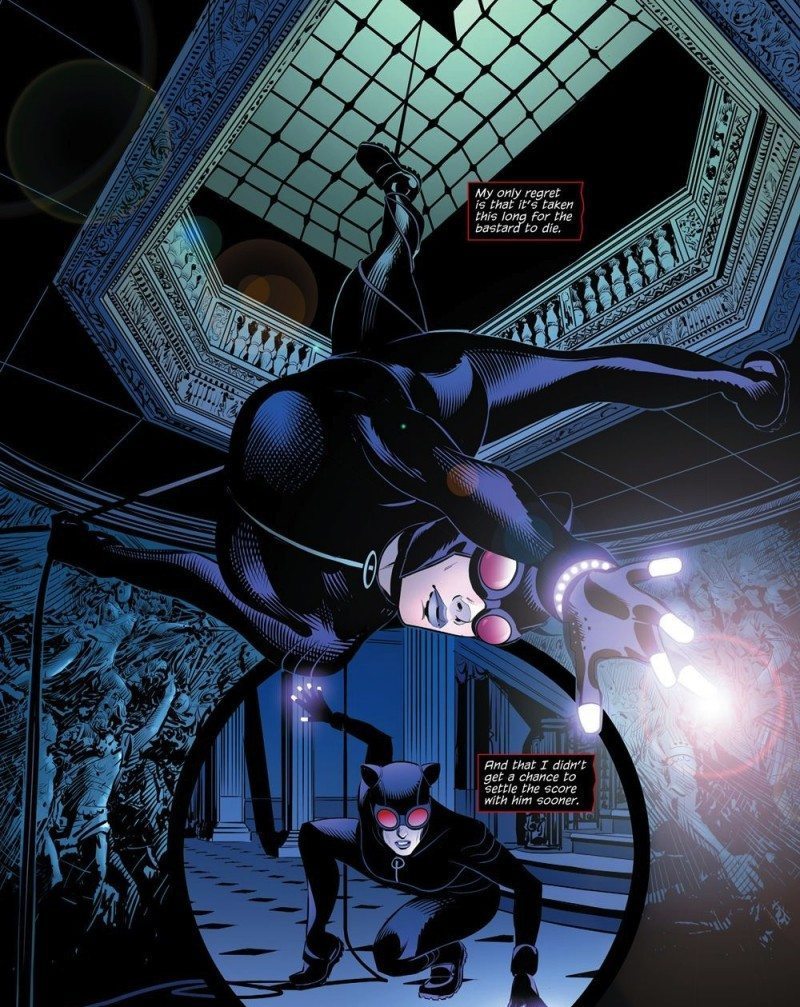 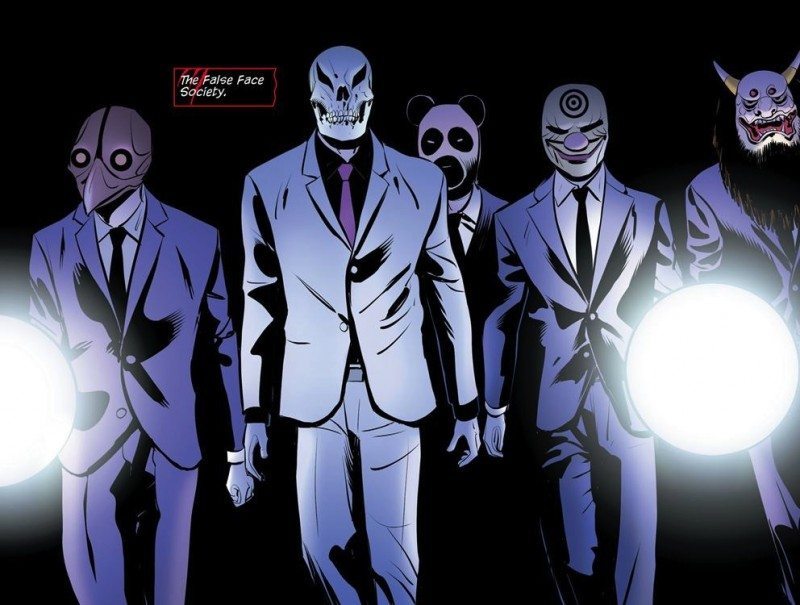 Especially after such a fun story in Tieri’s “On the Run,” it’s exciting to see what justice he can do for Catwoman’s character and Gotham. From the end of the last issue, we see a short chapter regarding the Faceless Mask and its history tied to the inception of Gotham itself. We also get a first look at Selina Kyle with an old flame named David fifteen years prior to when “Faceless” takes place. Appropriately, this all ties in with the surviving Gotham gang, the False Face Society, originally led by Black Mask (Roman Sionis).

As most DC fans know, Catwoman has had more than enough run-ins with Black Mask in the past, as her relationships with heroes and villains alike remain tenuous, at best. Always out for herself, Catwoman’s desires do not always coincide with those of other burglars. She’s not surprised to find the False Face Society beat her to the punch in taking the priceless and cursed Faceless Mask from Richard Sionis (Roman’s father and head of Sionis Investments). What she is surprised to see is a new face (hehe) in the bunch, White Mask. Punctuated throughout this new story, we get brief glances back to Selina’s early burgling days with David and how their paths have crossed with Richard Sionis long before Selina adopted the cat suit. 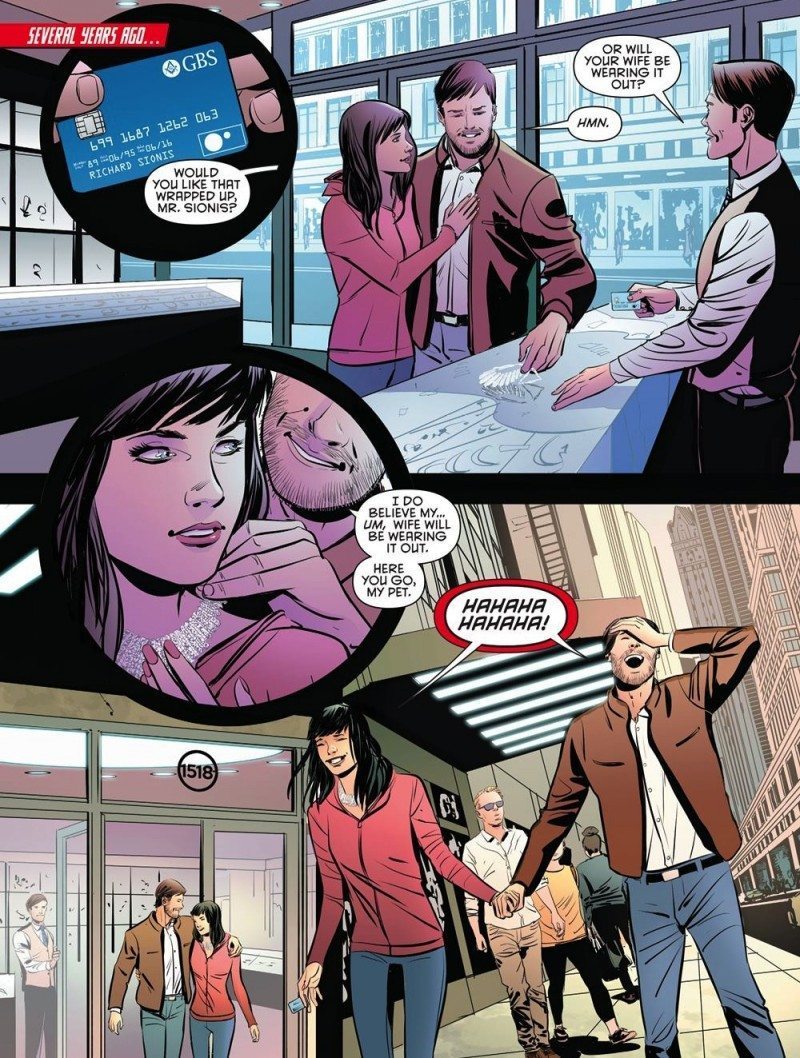 New faces, old faces, and characters from Selina’s past and future appear to lie in this story. With Tieri’s sardonic humor and pop culture references, Catwoman’s character really comes alive as a no-nonsense cat burglar who allows herself to have fun in her internal dialogue. Tieri preserves what makes Catwoman alluring and mysterious externally but likable and sympathetic in personality.

With the story regarding Catwoman’s past linked with people, the Faceless Mask, and Gotham City, we get the multi-dimensional experience that reflects Catwoman’s characterization. On top of all that, as rare as it might seem nowadays among comics, Tieri appears to have mastered pacing. This issue has just enough information to avoid being confusing and enough stimulus to keep you flipping through the pages. Needless to say, I’m excited to see all of this issue’s questions answered in next month’s installment.