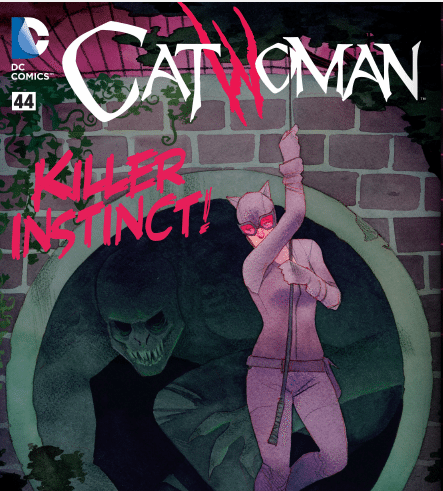 Catwoman’s identity has been compromised – and the war has begun!

Issue 43 ended with Antonia learning that Selina is Catwoman, and the two women confronting one another on the roof. But that’s not the identity reveal that kicks the comic into action. Killer Croc, who dragged Eiko down into the sewers and his home, is apparently a friend of Selina’s (which makes the last panel of #43 very misleading). After treating Eiko’s injuries, Croc drops “Catwoman” off at home unaware of the fact that Sionis is watching the security cameras. Later that night Sionis attacks the Hasigawa clan, and Eiko’s father learns that his daughter has been moonlighting as the cat-burglar.

Need a refresher? Check out Catwoman #43!

Meanwhile, at a family dinner, Antonia confesses to Selina that she originally went to Penguin to form an alliance, but he suggested the price would be Selina’s life. Antonia clearly didn’t go through with it, and Selina decides to retire as head of the Calabreses and pass the role on to Antonia. Her reasoning and justification is that it would be no longer fair to Gotham for her to keep both roles, and that she is unable to serve as the head of the family wholeheartedly.

So what does this mean for Gotham, the Calabreses and the rest of Selina’s arc? Referring back to Selina’s conversation with Killer Croc, she mentions that she needs to get out clean with no losses. The reptilian is the voice of reason, insisting that Selina has already suffered losses, in the form of an injured relationship with Eiko, and will probably lose more. It’s a typical point in crime stories– the deeper a person is embedded in the underground, the harder it’ll be to break free. Even with Selina’s relinquishment as head of the Calabrese’s to Antonia, there is bound to be resistance and trouble up ahead, if not within her own clan, then with others whom she has formed alliances with.

Selina’s “retirement” will be a refreshing change. The series has been rather boring with its portrayal of such a mild-mannered mafia boss. While the intention is to split the action and identity of Selina between mob boss and Catwoman, it dulls the story. The political intrigue, or lack thereof, is drawn out, and there have been few times where we see Catwoman bring out her claws. Maybe this new risk will change that, and up the excitement factor.