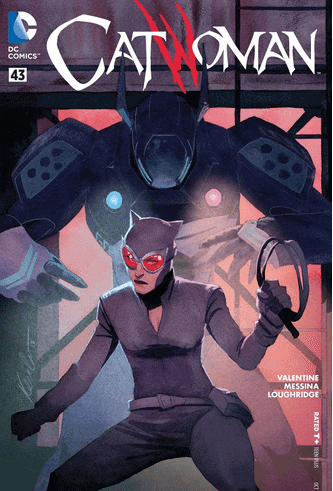 With political alliances being forged and broken, the stakes are running high in Gotham. But is it enough to break out into war?

Selina Kyle has been masquerading as the head of the Calabrese family, but since the announcement of Batman’s death in issue #41, she has been sneaking off into the night as Catwoman for reasons that blur the person
al-political line. These actions have left Antonia increasingly in charge of events and negotiations with other mob family members. This is how issue #43 starts–with Selina leaving a cocktail party and letting Ward figure things out.

During this nightly run, Catwoman plans on investigating connections to the former P.I. Bill Turner, but she’s stopped by Gotham’s robot Batman. There’s an underlying sense of familiarity between their dialogue (was Batman’s memories uploaded into the robot?) but that quickly ends; after a very small fight, Catwoman makes her getaway and is “rescued” by another familiar face: Bruce Wayne. The apparently broke millionaire hangs out around a women’s rescue center and engages in charity work. It’s all very confusing and Wayne’s appearance brings up a few questions: was there more than one Batman? Are Wayne and Kyle lovers such as in past canons? Do they know each other’s secret identities?  But that’s not all she runs into. When returning back to the house, Antonia greets her on the roof.

READ: Check out our review of Catwoman #42!

Meanwhile, the Hasigawa Family and Sionis have found out that a few men have defected to the Calabrese family. While they prepare their strategy, Eiko and Spoiler head out into town to see what they can find. The women split up, and shortly after, Eiko ruins into Sionis — it doesn’t end well for her, and hints at the introduction of a new, vicious character.

The theme that’s stressed the most this issue is trust. As Kyle tells Ward, “trust is a two-way street.” As a story based in a crime-syndicate structure, trust is very important; it’s like the ultimate currency. And as the Catwoman series stands right now, it seems that no one actually trusts each other enough to keep loyalties; everyone is suspicious and playing for their own personal gain. Sooner or later, there will be repercussions.