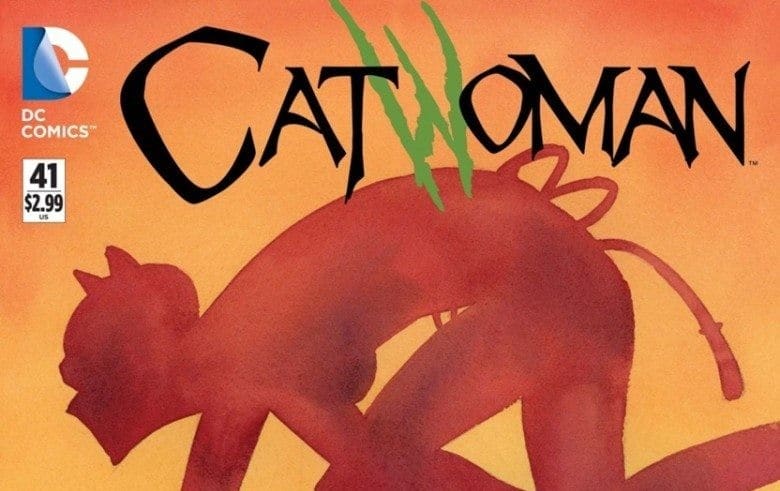 Selina Kyle goes back to donning her claws in the latest issue of Catwoman!

Selina has been playing mob boss for a while with the Calabrese family; she’s been involved with power struggles and questions of loyalty with the Falcones, the Borgias and even Sionis. But playing mafia games is put on the backburner when Selina learns that Batman is dead. Heartbroken and seeking answers, Selina vows to find out who killed her long-time lover/enemy/friend while under the guise of Catwoman. However, putting on the catsuit might come at a price…

Catwoman #41 is packed with a lot of information—the relationship between the Calabreses & the Falcones, Sionis’ plan, Batman’s death and the new Batman on the police force—to the point where it’s a bit overwhelming, especially for new readers to the series. However, the noir feel of the comic has enough intrigue to keep the reader interested, not only in Kyle’s motives, but the other members too.

Loyalty plays a big part in this series; it’s a common enough theme in mafia- and gang-related stories, but there’s a complicated history at play in Catwoman that helps keep the series from feeling cliche. Throw in a few secret relationships, romantic or professional, on top of Selina Kyle’s back-and-forth cat-thieving, and you’ve got a comic with multiple, compelling story lines.

The art for this issue is a lot of hard lines, dark shadows and muted colors. It’s a great reflection of the seedy ongoings of Gotham, as well as the mood of the characters. However, there is a lot of fluidity and the majority of characters are expressive in the most subtle movements, which could be seen as a testament to the required secretive nature to be playing in Gotham’s underground.