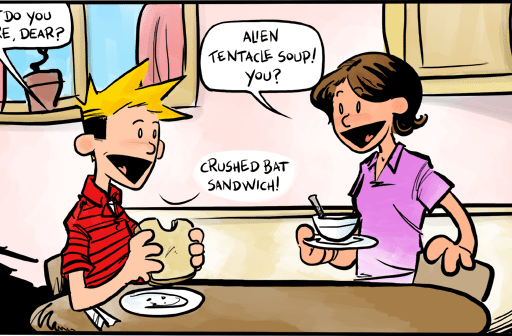 Calvin and Hobbes made its last appearance in newspapers on December 31st, 1995, and its departure from the American comics page was mourned by everyone — with the sole exception of its creator. “I’ve never regretted stopping,” says the legendary Bill Watterson, now in his fifties and living quietly in Cleveland Heights, Ohio. “If I had repeated myself for another five, ten, or twenty years, the people grieving now for Calvin and Hobbes would be wishing me dead.”

If Watterson’s retirement at the height of his popularity, was mourned, it was also admired; when he quit, he quit. It was a refreshing exception to two common practices of print cartoonists: semi-retirement in which re-runs of a strip are published, or a dynastic lingering in which the comic is drawn by some younger relative of the original creator. (Yes: apparently cartoonists can both raise children and get them to help their aging parents). Both practices keep fresh ideas from appearing and new talent from emerging. 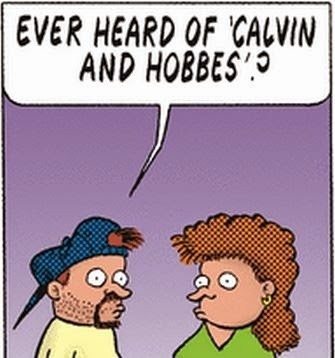 Then on June 7, 2014, some of Watterson’s visual trademarks – fantastic alien spaceships landing on Earth, with beautiful, creamy blast effects; a sled as the promise of exploration and childlike adventure – began to appear inside Pearls Before Swine, a comic strip written by 48-year-old Stephan Pastis. After three days of cartoons, Pastis announced that the strips had actually been written and drawn by Watterson, marking his first return to the American comics page in twenty years. Pastis explained in a blog post that he had previously sent Watterson a strip of his which showed Pastis as a character inside the strip, successfully picking up a woman at a bar with the line, “I’m a cartoonist…Ever heard of Calvin and Hobbes?,” and later lying in bed thinking, “That was wrong.” Pastis didn’t think Watterson would ever respond, but the retired, retiring cartoonist did. On his blog, Pastis called his reappearance “a glimpse of Bigfoot” and fans everywhere rejoiced at his annunciation.

Since syndicated cartoonists usually only replace each other in newspapers when someone dies or retires, the cultural march forward of the American comics page tends to be very, very slow. And since print comic strips run for such a long time, readers’ perceptions of comics tend to stay fixed once they jell. Calvin and Hobbes, was a beloved classic, graceful and pure-hearted; Pearls Before Swine, an irreverent cynical upstart. To see the two together, and getting along so well, was a little disconcerting – like seeing your divorced parents together again, and touching. Yet, Calvin and Hobbes may be such a huge cultural achievement as to make that odd collision not so jarring after all. Or to put it another way, no matter who Mom shacks up with, she’s still your Mom.

For many teenagers and young adults today, Calvin and Hobbes is a powerful memory portal, travelling us back through the magic spaces of childhood, and letting us feel, again, currents of discovery, of innocence, and of adventure. The strip makes fun of its six-year-old protagonist Calvin (“In the past, you’ve been a remarkably poor judge of what your mom cares about,” muses Hobbes, Calvin’s tiger friend), but the strip’s sympathies are largely with Calvin’s view of the universe, that of an imaginative, precocious kid. Watterson is at one with his sweetly and radically innocent hero, who is so often dissatisfied with life. (“Life could be worse, Calvin,” gently remarks his mom after one of his complaints, to which Calvin retorts, “Yeah, but life could be a lot better, too!”) When you imagine Watterson crouched over his desk, vibrantly illustrating Sunday page strips that depict the creations of Calvin’s imagination in full color –it’s impossible not to feel that Watterson isn’t just giving an avuncular wink to childhood, but longing for it. Fans who read the strip in their childhood are under a double spell: they’re nostalgic about the memories of childhood that the comic strip invokes, and nostalgic about the actual experience of reading the strip itself. And that experience is still floating in the memories of my generation, even though Calvin was taken out of daily circulation years before we grew up (or for some, like me, before we were even born). But Watterson, in interviews, is surprisingly self-effacing about how the magic of Calvin made it from his head to the comics page.

In the years stretching between his retirement and his reappearance, Watterson has given just a few interviews with responses are so boring, uninflected and resolutely middlebrow, that they actually reveal personality through numerous deflections. Asked about his popularity, Watterson “can’t explain why the strip caught on the way it did.” Asked about his legacy, he says readers, can and will “always decide if the work is meaningful and relevant to them, and [he] can live with whatever conclusion they come to.” In fact, he says, “my part in all this largely ended as the ink dried.” It’s especially striking when set against our contemporary age, wherein the way to be famous is to create a work of art whose qualities people associate with you. If it’s hard to find the man inside Calvin and Hobbes, that may be because Watterson is willing to let the strip exist as a work of art rather than as an evolving expression of Watterson the man.

Watterson is a magician, who disappears himself at the end of his act; by contrast, his unlikely collaborator, Pastis, is more like a vandal, wittily defacing the work of other cartoonists and writing his name large. “I am very concerned as to how the writer of Pearls before Swine can take sweet, innocent characters from family-oriented cartoons and use them as the brunt of their own brand of sick humor,” reads a letter to the editor of the Winston-Salem Journal, a reference to a breathtakingly transgressive Pastis strip which shows Pastis being tortured by the lovable cat and dog from Patrick McDonnell’s Mutts. Pastis likes to make his readers contend with sentences that they have in all likelihood never before seen on a newspaper comics page; in one Mutts strip Woofie asks his feline accomplice, with his trademark adorable lisp, “May I electrocute his nipplesh now?” Pastis seems to take great pleasure in trying, and especially failing, to pitch his sensibility to the wrong audience. (Pearls Before Swine appears in the staid Mary Worth territory of a newspaper comics page; the aforementioned strip, along with a follow-up in which Pastis asks Beetle Bailey if he’s “friends with benefits” with Sarge, were both barred from a Canadian newspaper because the editor felt that the strips respectively featured “torture” and “sexual content.”)

If Watterson pokes gentle fun at the absurd universe, contemporary cartoonists like to poke other cartoonists with a stick – and Watterson has been a target before. His assailant was cartoonist Mark Tatulli who draws Heart of the City and the pantomime strip Lio. Lio is darker than Pearls, and less dry and self-referential – the main character, a young, Calvin-aged boy named Lio who never speaks, mingles with such creatures as the Grim Reaper, a giant squid, and his lazy bum father, but never seems scared of them the way adults might be. Perhaps the defining Lio strip is the one where Lio watches a spider devour several flies that have been caught in her web, and, thinking the whole thing is a marvelous play, applauds excitedly. (In another consummate example, the Grim Reaper shares a carefree bike ride with Lio, and Lio drops him off at an old folks’ home, where, presumably, he has business.) In 2012, Tatulli, explaining that there’s “nothing I like skewering more than a sacred cow,” released a parody of one of Watterson’s compilations, There’s Treasure Everywhere, which he titled There’s Corpses Everywhere. (On the cover, a beaming Lio has just dug up what disturbingly but recognizably appears to be Calvin’s skull.) I now call to the stand a 29-year-old commentator from the Washington Post. “What Tatulli did,” said the Calvin fan, “is cheap and stupid. Watterson’s work isn’t a “sacred cow” in some bad way; it’s the holy grail of true, intelligent comic readers. …it’s something worthy of being treasured, not mocked.”

What’s indisputable is that although Watterson took himself out of the American comics page two decades ago, that didn’t end his cultural impact; even twenty years later, popular cartoonists like Pastis and Tatulli are playing off him, trying to get a reaction out of the grand older man. There’s a certain irony to the fact that Pastis who likes to shock readers by playing against the expectations of any given audience is using that tactic with an artist who doesn’t think about demographics at all; tellingly, the reaction to the Pastis Watterson collaboration wasn’t laughter that a giant had been skewered, just that, for whatever reason, the giant was back. It’s a testament to Watterson’s quiet nobility that fans felt Calvin should be exempt from the slings and arrows of mocking cartoonists. Still, although Pastis and Tatulli both used incongruous transpositions for comic effect, readers could tell the difference between them. Pastis used Watterson to mock himself, pointing out that while Watterson used comics for art, Pastis used them to get laid, comparing his venality with Watterson’s principles and gently suggesting that no one is good (except maybe Watterson). Tatulli, on the other hand, just made fun of Watterson, suggesting that there’s no true gold in the world and that comics always should remain open to open mockery. That the American comics page has this kind of cultural complexity twenty years after Watterson ended his strip because of a one-week reappearance is a hopeful thing that speaks to the liveliness and fecundity, still, of print cartooning as a medium.

So, yes, Stephan. You may electrocute your nipples now.