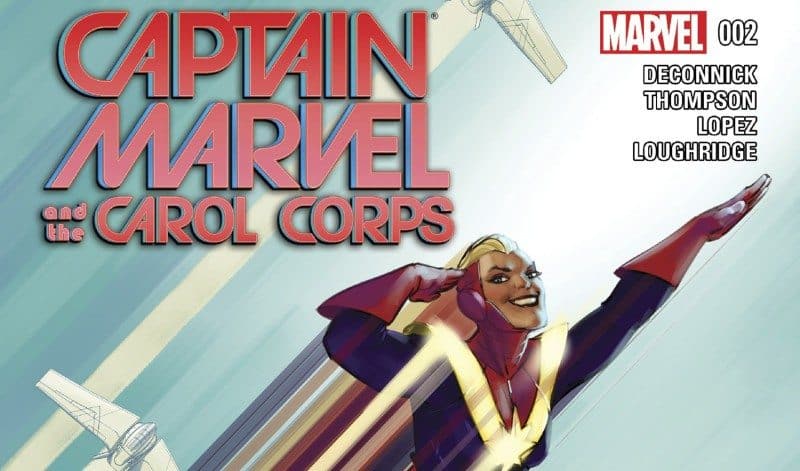 The whole gang is back in CAPTAIN MARVEL AND THE CAROL CORPS #2 to try and figure out what exactly is going on with all of this Doom Business. But first we have to figure out a little bit more about the person that Carol saved from the Ultron ship her team blew up… Oops. 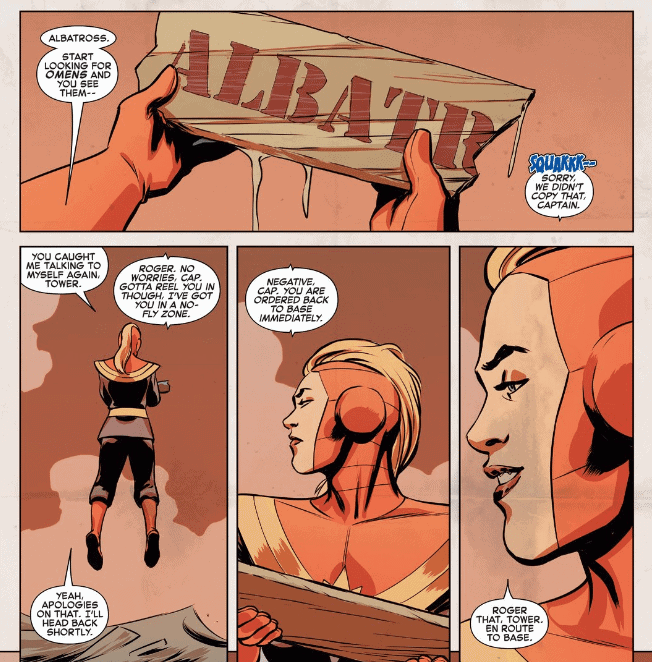 Carol goes back to the scene of the crime trepidatious about what they have done before being immediately called back to base. She returns to her cabin to speak to the one survivor of the wreckage. Surprise! It is Captain Rhodes, or Rhodey as he prefers to be called, and he seems to be having some issues maintaining consciousness. Carol asks her doctor friend to come check on him and amidst her check up she is assaulted by Bee who argues that Doom is lies! The whole Corps gets involved in the conversation until the doctor agrees that she knows something is off. She knows because she believes that Carol did not get her powers in the magical way that Doom says. She is something different. After this conversation, the girls decide to put their plan into action to get to the bottom of Doom, but not without a few complications as they try to keep their investigation under the radar. 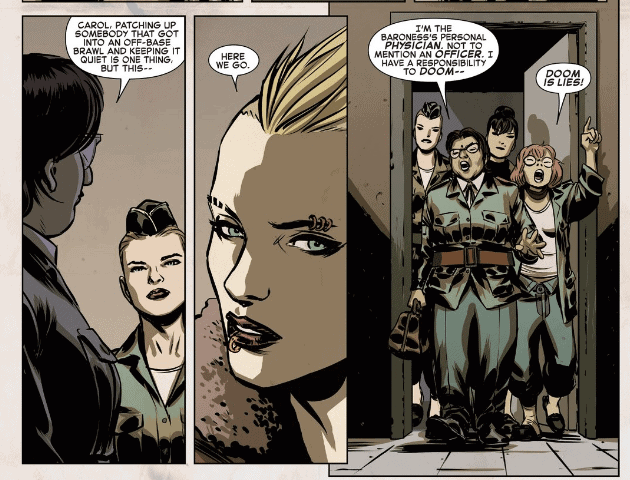 I have to admit that my first impression of this comic wasn’t at the same level of excitement I felt after reading the first issue. So much so that I was convinced that I had missed something great about the comic and decided that I needed to read it again. After many hours of introspection I think the problem I found with this comic was the same problem I had with the second issue of A-FOCE: too much talk about Doom. It is becoming more and more apparent as I go through the comics that I have decided to place my attention on during the Secret Wars that what makes the tie-ins great is that we get to see these characters in new settings, but what ruins the story is trying to explain what is happening with complex mystery plot elements. For example, it is great that Rhodey has been integrated into the narrative, but it is frustrating when most of what he gets to do is give backstory about the different worlds. 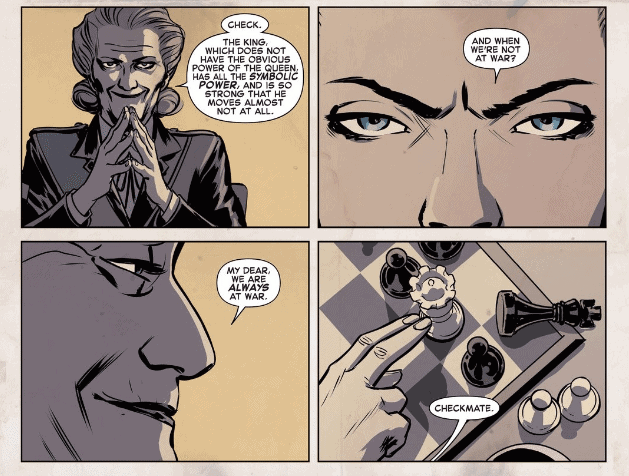 However, there are many great characters on display in this issue. I love to hate the creepy menace of Carol’s commanding officer when they talk during chess about the nature of war. It feels like she is turning into the series’ villain, which I am totally interested in and okay with. Especially because one of the other great things about this comic is Carol Danvers’ guilt over blowing up an innocent ship. Her interactions with Rhodey about the mistake that she made is great, and the conflict within her about what is the right thing to do is a new side for Captain Marvel.

It is also clear that even though Carol is a Colonel, she is beginning to see that doing the right things and doing what the military orders her to do are not the same thing. This distinction makes the story feel like it is an origin story of how she branched off and became an Avenger. Of course, the tension here demonstrates what could be a traditional narrative of how a vigilante is above the letter of the law, but because Carol is surrounded by her loyal and just Corps it instead feels like the story of an uprising against an unjust system that lacks transparency. Something that is certainly on the minds of many Americans currently between discussions of NSA surveillance and the unjustified murders of many black men and women.

The beautiful retro art continues to be one of my favorite parts to the comic, and I am particularly struck by the beautiful and dark lighting that has been on display here. It almost has a noir feel, and it really adds to the menace our potential new villain, the baroness. I attribute this to David Lopez’s beautiful art and coloring. He does both, of course, which makes him doubly awesome.

Overall, the comic is not at the same level of the previous issue, but the strength of the character beats and the conflicts that Deconnick and Thompson set up between the Corps and the Baroness as we as Carol and Rhodey makes it worth a read. It also makes me very excited to see the fall out in the next issue. I’m looking forward to it Deconnick, Thompson, and Lopez! Don’t let me down captains!